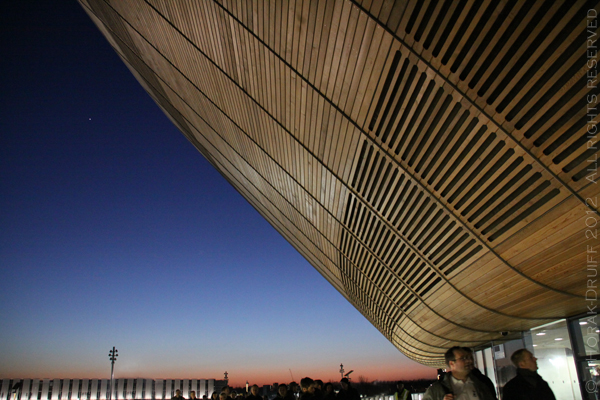 The London Olympic velodrome is in the Velopark section of the Olympic park in east London, and is only the third 250m covered cycling track in the UK.  According to Wikipedia, It was designed by Hopkins Architects and completed earlier this year at an estimated cost of just over £100 million.  Designer Ron Webb who designed the Velodrome tracks for the Sydney and Athens Games was in charge of the design and installation of the track, which was built using 56 km of Siberian Pine and 350,000 nails.  The Velodrome is informally known as “The Pringle” due to its distinctive snack-like roof shape, but up close and personal last Saturday when I went to watch the World Cup track sycling event there, it looked more like some sort of beautiful alien mother ship – a close encounter of the Olympic kind.

Saturday Snapshots is a series of non-food photographs published every Saturday on CookSister.  Previously featured photographs can be viewed on the Saturday Snapshots archive page. Many photos featured in Saturday Snapshots are available to buy as high-quality greeting cards or prints in my RedBubble store, or even as high-quality A3-size calendars. If you want a custom calendar with your own selection of photos, starting with any month (not only January), please e-mail me and we can discuss your requirements.  New calendars for 2012 include FLOWERS and RAW – they make great gifts, for friends, family or for yourself.