You are here: Home / Recipes / Gluten-free / Borscht – my beetroot epiphany and a chance to win £400 worth of flights 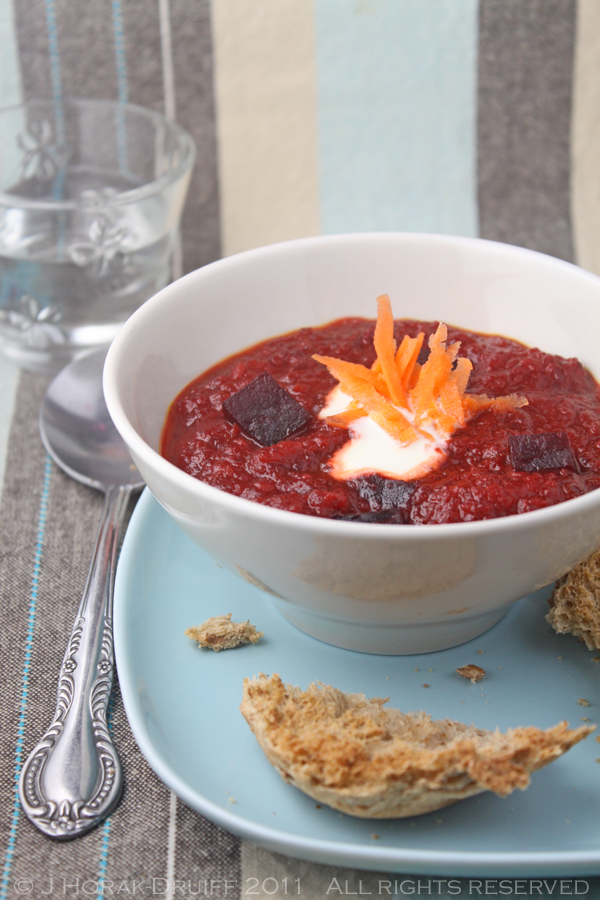 This competition is now CLOSED.  On Wed 7 December I asked @manthatcooks in Australia to pick a number live on Twitter.  He picked 22… which means the winner of £400 worth of flights is MR CECIL ROWE! Congratulations! American Express should be in touch shortly.

Have you noticed that there are some foods that are almost universally loved – so much so that the mere mention of their names can be enough to bring a smile to people’s faces? Chocolate. Popcorn. Pizza. Ice-cream.  Cake. Sure, there will be the odd person who does not like them, but if you take a random sample of humanity and ask their opinion on these foods, I am willing to bet that the overwhelming majority will say they love these foods.  Then there are foods that some people will love and others will eat but can be indifferent to – for example, I love cheese, but my husband can take it or leave it.  He does not really avoid it – he just does not seek it out. And then there are the foods that polarize:  people either love them or hate them with very little middle ground in between.  Think foods like liver/kidneys; okra; oysters; liquorice, Marmite (who famously built an entire marketing strategy around this polarisation!) and… beetroot.

I have spent a lifetime avoiding beetroot.  Part of it stems from traumatic experiences as a child with vinegary pickled beetroot that was such a ubiquitous standby at every braai salad buffet in South Africa as I was growing up.  Firstly there was the vinegar (a flavour I have never been entirely sold on, even less so as a child) – but even worse was the purply red juice.  I am the kind of person who likes their food to be neat on the plate – maybe not quite OCD, squared-off-corners and boundary-fences neat, but I am not a fan of sauce from one salad or dish leaking into another and sullying the flavours of both. And no matter how carefully you scooped and tried to drain the beetroot juices before depositing the pickled slices on your plate, you always got a matrix of bloody purple beetroot juice that would stain your othr food, soak your paper plate and if you were unlucky stain your clothes right through the plate. And even if you could look past that, there was the taste which I think is best described as follows:  eating beetroot is like eating bloodied earth. But just like I loathe bananas yet love banana bread, it seems that it was only a matter of time before I discovered some format in which beetroot is bearable – and it seems that I have made the discovery.  So to all of you fellow-beetroot haters out there, I have only two words to say:  ROAST IT.  Slow-roasting beetroot could not be simpler, requiring little other than an oven and some patience, and the tubers emerge from the oven transformed.  Roasting takes the edge off their strident earthy flavour, softens their consistency to something more like a stewed pear, and caramelises their plentiful natural sugars so that they emerge surprisingly sweet.  Plus all that oozy juice is tamed and the beetroot can sit on your plate quite blamelessly, staining nothing.

Having tossed a few beets into the oven to roast, I had a couple of hours to decide what to make with them when they were done, and I finally settled on borscht.  Borscht is generally accepted to have originated in the Ukraine, but is one of those recipes that comes in as many variations as there are countries in Eastern Europe.  The main divide is between hot and cold borscht.  Cold borscht consists of a base of young beets which is chilled and mixed with sour cream before being topped with chopped fresh vegetables like radishes or cucumbers and garnished with dill (and sometimes boiled egg).  Hot borscht consists of a thick, hearty soup of beets and possibly other vegetables like potatoes or carrots, cooked in a beef stock and served warm with bread.  Some variants include tomato; some include meat (as opposed to just meat stock); some are made ahead of time and allowed to take on a sour, vinegary flavour before serving (much like fermenting cabbage); some are only lightly flavoured with beet as opposed to  beet-based. My take on borscht steers a path through Eastern Europe, taking elements from a number of these variations to produce a delicious and exceptionally thick and hearty soup served with sour cream – quite possibly the nicest thing a beetroot can become (and it’s low-fat and gluten-free!).

Should you wish to have a chance to win £400 worth of flights from the UK to Europe – maybe to travel round Eastern Europe sampling all the various incarnations of Borscht, this is your lucky day – because this is the prize I am giving away this week on CookSister!  Scroll to the bottom of this post below the recipe to find out how to enter. Pre-heat the oven to 180C.  Rub the beets and thyme sprigs all over with olive oil and roast in the middle of the oven for about 90 minutes or until the beets are soft when pierced with a sharp knife. Allow the beeets to cool, then peel and cube.

In a large saucepan, heat the olive oil, then add the onion, celery, potato and carrot and sauteé for 4-5 minutes until beginning to soften, then add the beet cubes, reserving a few for garnish.  Add the stock and allow to simmer for 45 mins, stirring occasionally, until all the vegetables have softened and the potato cubes can be crushed with a fork.

Remove the saucepan from the heat and use an immersion blender to blend the soup.  If it is too thick, add a little more stock or hot water.  Return to the heat and add the vinegar and sugar, stirring to dissolve the sugar.  Add the reserved cubes of beetroot and heat through.  Test for seasoning and add salt and pepper to taste.

Ladle into bowls and top each with a generous spoon of sour cream/yohgurt and a sprinkling of grated carrot.  Serve immediately with crusty bread.

And now – on to the competition! I recently joined a number of other bloggers and American Express at a gold-themed function to celebrate the golden travel rewards linked to their Preferred Rewards Gold Card. Hosted at St Martins Lane hotel, the evening’s activities included panning for “gold nuggets” under the watchful eyes of two friendly and hilariously mustachioed “frontiersmen”; sipping gold-themed cocktails; and feasting on the rather lovely canapés while hearing more about the travel perks of having a Preferred Rewards Gold Card.

The Card offers a host of opportunities to earn points and turn them into really worthwhile rewards such as flights, hotel stays and much more. To help build up points quickly, you will receive double the rewards on virtually all travel-related spend and practically all purchases while you’re abroad. Unlike some other reward schemes, there is no limit on the points you can earn and they never expire, so this is one card that’s worth its weight in gold (so to speak!). American Express is also currently giving away a welcome bonus of 20,000 points if you spend or charge £1,000 on your Gold Card in the first three months of Card membership  – enough for a pair of return flights to some of Europe’s most exciting cities.* To find out more, visit http://www.amex.co.uk/goldrush.

But the best part of the evening was that I was lucky enough to win a pair of flights to anywhere in Europe – and I am giving them away here on CookSister to one of my lucky readers!  The prize also includes two annual passes to airport lounges worldwide.

For a chance of winning a pair of flights from the UK to a European destination of your choice up to the value of £400, simply answer this simple question:

The Preferred Rewards Gold Card knows no boundaries when it comes to the world of what?

a) Health
b) Travel
c) Sport

Full terms and conditions are available here. The winner will be selected at random from all the correct entries received and the competition will close at midnight on Tuesday 6th December 2011. Good luck!

DISCLOSURE: The prize is sponsored and administered by American Express and some of the text above was included at their request. Please read the terms and conditions before entering.