You are here: Home / Restaurants / London restaurants / Cabana – going for a Brazilian in Westfield, Stratford 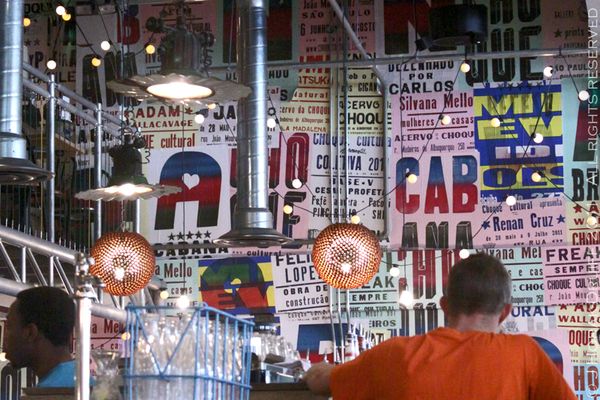 Ever get the feeling that language is a tricky minefield to be negotiated rather than a useful tool for communication that separates us humans from the beasts of the field? For example, if I tell you I am “going for a Brazilian”, do I mean:

a) I have fallen head over heels with Filipe and will stop at nothing to make him mine?

b) I am ditching my bikini briefs and thongs and buying a new style of underwear?

c) I am going to have all the hair on my head completely straightened?

d) I am going to have all the hair in my… umm… lady garden completely removed?

e)  I am going to eat at a restaurant where meat is served on skewers and washed down with Caipirinhas?

Well, all of the above could be correct – but you’d have to rely on the context to tell you which one I indulged in 2 weeks ago. (Hint: Nick might take umbrage at a); I would take umbrage at c) and d); and although b) might be true, this isn’t THAT sort of blog! ;o)) So that leaves us with option e), which is exactly what I did with a group of friends and fellow-bloggers!  Although the gargantuan Westfield Stratford City is only 20 minutes by DLR from my front door, I had not visited until two Saturdays ago and was pleasantly surprised at what I found.  Granted, it’s full – but then Christmas is upon us and everywhere is full.  It’s light and feels airy and all the major chains are there – no need for me to drag myself out west any more.  Hurrah!  There is also a cluster of restaurants (including Busaba Eathai, Comptoir Libanais, Las Iguanas and The Real Greek) which is where we headed to check out Cabana, billed as a Brazilian barbecue restaurant. The restaurant is part of a small chain of two branches, founded by friends Jamie Barber and David Ponté after they fell in love with the sights, sounds and flavours of Brazil.  The space is quite airy with exposed pipes and ducts, acres of blonde wood, and the kitchen screened off by distressed wooden plantation blinds. The decor is young and funky, put together to resemble a jumble of authentic Brazilian artefacts with lots of Portuguese posters, fab banquettes made of recycled denim jeans and lights strung up like at a street party – you do feel a little as if you have been transported from grey London into another world.  Staff are young, friendly and perky – and call in their orders on iPhones which we thought was rather a novel idea. First order of business was, of course, cocktails which came in alcoholic and non-alcoholic versions.  Mine was a Bacana Berry (fresh berries, pink grapefruit juice, sparkling water and an optional shot of cachacas (no prizes for guessing which option I went for!) – not too sweet, slightly sparkly and prettily pink, this was a definite winner.  Elsewhere at the table the Cool Coladas were pronounced nice but were too sweet for my taste. The concept behind the restaurant is Brazilian street food (comparisons with Wahaca and its take on Mexican street food are inevitable) and broadly follows the lines of a rodizio grill where servers (or cabanistas as the menu tells us) walk around the restaurant with different grilled meat on skewers, offering portions to customers until the customers have had enough.  The menu is therefore divided into starters (“street food”), skewers, sides and desserts, so we jump in at the starter end with pao de queijo (£3.95) – Brazilian cheesy balls, no bad puns please – for me and crispy pastels (£4.65), sweetcorn pamonhas – grated sweetcorn steamed in coconut milk wrapped in a corn husk – (£3.35) and chopped salmon ceviche (4.75) for my companions. The cheese balls were served with a smoky pepper mayo and were pleasant enough but a little heavy and less cheesy than the delightful ones served by Gaucho. The crispy pastels were meant to be stuffed with four cheeses and were a crushing disappointment.  Either somebody had forgotten to add the cheese or it had leaked out during frying, but there was little hint of cheesiness.  The peppers they were served with were good though.  Michelle’s ceviche was, again, tasty but lacked the lime juice bite that I usually love in cevche.  Nice quality salmon though!  The sweetcorn pamonhas was a slightly odd thing to put on a starter menu as it was basically sweet – a little like the idea of Mexican huitlacoche (another Latin-American peculiarity).  It was spiced up with some very good chill salt, though and its owner enjoyed it. Overall, Id say the starters were OK but unspectacular. Moving on to mains, then.  As anybody who has visited a rodizio grill will know, you are given a little token for your table that is red on one side and green on the other.  Turn the green side up and the servers will visit your table to offer a portion of each fresh skewer of meat that comes off the grill.  Turn the red side up and they will stop.  The slightly unsettling thing is that you never know in what order the grills will come, so your heavy fillet steak mgith arrive before the skewer of prawns you were looking out for, but once you get over this it is a fun concept.  Unlike most rodizio grills where you pay a flat fee though, here the skewers are divided into four price categories:  £3.35, £4,50, £5.45 and £5.95, as determined by the colour of the skewer.  Options include grilled corn on the cob, baby back ribs, a chicken sausage wheel, chimichurri rump steak, and chilli and cumin lamb fillet. My two main choices were the butterflied pork tenderloin with a Parmesan crust (£5.45), and the huge portobello mushrooms with halloumi cheese (£4.50).  For sides, we shared a roasted pumpkin and avocado salad (£7.25) as well as cassava  and sweet potato fries (£3.25 and £3.45 respectively). The salad was large but contained microscopic amounts of avocado, the disappointment only partially countered by generous lashings of feta cheese .  What it lacked in avocado, though, it made up for in salt – boy, was it salty!!  I think it had possibly been salted and then not tossed…  The cassava chips were crispy but a little stringy (which I think is probably a function of cassava rather than the preparation!); but the sweet potato fries were a total hit – light, crispy and moreish. My pork tenderloin was huge, surprisingly juicy and tasty, although the Parmesan crust was more of a sprinkle than the crust I was expecting.  The portobello mushrooms were an undisputed hit.  Other skewers at our table included spicy malaguetta tiger prawns (a little charred and very spicy, by all accounts!), baby back ribs (fall-apart tender and delicious), the lamb fillet (wonderfuly tender and nicely spiced) and the honey and date chicken.  The table was also provided with fresh salsa and chimichurri as well as Cabana’s own brand bottle malaguetta pepper sauce (hot hot hot!). Mains were generally better than starters I thought although portion sizes were really variable – my huge chunk of pork was cheaper and considerably larger than three prawns.  This would matter less if the skewers were charged as a flat fee.  Still, the concept is great fun and something a little different for most London diners- the lads at the table next to us certainly seemed to be having a meat-tastic time. For desserts, they keep things super simple and serve variations on only one theme:  frozen yoghurt. For £3.95 you get a choice of three flavours of frozen yoghurt (natural, caramel or peanut butter) and a topping – from fruits to chocolate treats, to nutty caramels, to sauces.  I could not resist the peanut butter frozen yoghurt with a caramel sauce topping.  The yoghurt was quite splendid – not full of chunks but smooth yet redolent with peanut flavour.  I also tried Michelle’s caramel yoghurt which was equally fabulous, especially the nut brittle topping. If they sold this in tubs, I’d buy it (hint, hint, Cabana!) The whole meal was a fun experience, if not earth-shattering in terms of cuisine.  Staff were all super-smiley, knowledgeable and seemed to genuinely enjoy their jobs.  The space and the entire concept of rodizio dining will come as a pleasant surprise to most Londoners and I can see this being a good night out for groups of friends, or a great venue for a birthday dinner.  It’s also a good cut above the fare you usually find in shopping centres after a long day on your feet – the cocktails alone will serve to revive you.  For about £35 for the meal I had, it’s not badly priced either – and I was certainly full by the time we left! If you have not experienced a rodizio meal before, I would definitely recommend that you try this one – it may not be the world’s most authentic Brazilian cuisine, but it’s a nice non-threatening introduction.

Liked: the fun concept, the smiley staff, the frozen yoghurt
Disliked:  the lacklustre starters, the overly-salted salad
On a scale of 1 to 10:  6

For other perspectives on this meal, please check out:

DISCLOSURE:  I enjoyed this complimentary meal as a guest of Cabana, Westfield Stratford City.