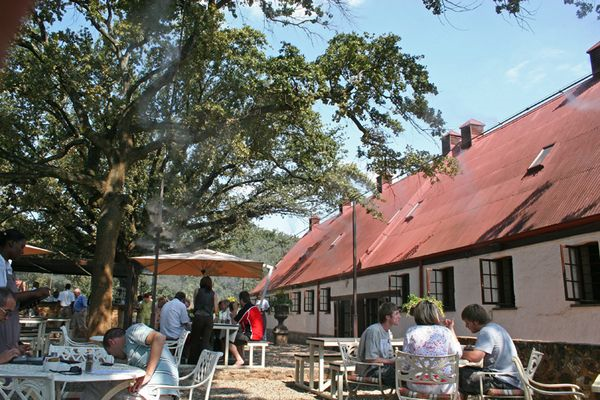 I always find long-distance air travel to be a totally surreal experience.  For a start, you spend 12 hours in a metal tube kept aloft by sheer force of good engineering, at a cosy temperature of 22C while the air on the other side of the wondow is about -34C. And then there is the experience of boarding the plane in the middle of a snowy European winter, and emerging 12 hours later blinking into the harsh Johannesburg summer sun.   And for me, this surreal feeling is enhanced further if my dear friends then whisk me off to a completely improbable place for my first meal home – which is exactly the experience I had on my first visit to Irene Dairy Farm near Johannesburg. “I’m taking you somewhere you’ve never heard of and that will totalyl surprise you”, said Catherine – and she was correct.

The little township of Irene is today part of the Pretoria metropolitan area, but driving into it there is nothing metropolitan about it. The peaceful rural surroundings make it easy to picture the early days of this little settlement when it started out as Doornkloof Farm, home to Daniel Elardus Erasmus and his family from the 1830s.  The name remained the same until the farm was bought in 1896 by Johannes Albertus van der Byl (“Bertie”) and renamed Irene after his daugher.   The settlement that had grown up around the farm also adopted the new name and in 1902, Irene was declared a township.  Bertie was the first of five generations of van der Byls born in Irene, and the farm is still in the family today.  Over the years the family has been responsible for building up the herd of dairy cows on the farm, and locals still flock to the farm shop (sometimes with traditional one gallon milk pails) to buy the fresh farm milk.

Apart from the dairy operation itself, there is a farm shop which stocks an impressive range of artisanal food products, mostly sourced from the Gauteng area such as cured meats, cheeses and olive products.  There are also freshly baked breads, fresh fruit juices and milk, and a wonderful selection of herbs and condiments such as the Cape Herb & Spice Company’s outstanding range.  The first time I visited Irene Dairy Farm, we walked through the farm shop before we went to lunch and Catherine practically had to drag me out by my feet – I was like a kid in a candy store!

But onwards and upwards.  There are two dining options at Irene:  for more casual, light meals, there is the wooden deck that runs the length of the farm shop building; or there is the Barn Restaurant, situated in and around one of the original 1890 barns, which is where we ate most recently.  We chose to sit outside (although there is also seating inside) under the ancient and impressive oak trees.  One of my favourite things about both the Barn and the Deck is the innovative air conditioning system.  If you look closely at the picture above, you will see what look like puffs of smoke in the tree branches and at intervals along the barn roof.  This is in fact water mist sprayed from a system of thin suspended tubes above the dining area.  There’s enough spray to cool you down, but not enough to get you wet. I was enchanted! On to the food.  As it was hot and summery I wanted a salad, and as halloumi cheese is a rarity on London menus, I could not resist the grilled halloumi salad.  Nick (as I recall) had a pannini or a burger, and Catherine had a smoked chicken, Emmenthaler cheese and couscous salad. All the portions were generous and the ingredients were fresh.  And unlike some places, they do not stint on the expensive ingredients – there was a load of smoked chicken and a load of halloumi – as you can see above!

Before (or after) you eat, you should also make time to visit the nearby Irene craft market and the unexpected historical treasure at its centre.  General Jan Christian Smuts, one of South Africa’s most prominent international statesmen and a signatory of the original United Nations charter, bought a third of the original Doornkloof farm in 1908.  As he needed a home for his growing family he bought, for the princely sum of £300, the wood and iron building which had served as the Officers Mess of the British Forces in Middelburg during the Anglo-Boer War.  The building was dismantled, brought to Pretoria by rail, and then taken to the farm Doornkloof by ox wagon, where it was re-erected at the substantial cost of £1000.  Gen. Smuts and his wife lived at Smuts House from 1909 until his death in 1950 and the British Royal Family visited him there on their South African visit in 1947.  The building has been lovingly restored and today looks very much like it did when the Smuts family lived there.  It is a restful space and it’s easy to imagine how Gen. Smuts might have retreated here after the rigours of public life to pursue his interest in botany and philosophy. It’s well worth a visit.

With a craft market, a working dairy, a wonderful farm shop, a historical building AND a good restaurant, Irene makes for a lovely day out in the country – even though you are less than an hour from the suburbs of Johannesburg (and literally IN the suburbs of Pretoria!).

Nominations are now open for the 2010 South African Blog Awards.  I would REALLY appreciate it if you would take a few moments to click on the link below and nominate me in the categories Best Food & Wine blog and Best Overseas Blog.  Only the blogs with the most nominations go through to be finalists, so every nomination counts!! Pretty please with chocolate sprinkles? When you click the link below, CookSister has already been selected as nominee in the abovementioned categories, so all you have to do is enter the security code displayed and a VALID e-mail address, then click on the link in the confirmation e-mail they send you. NB – you have to click the link in the e-mail that you will be sent, otherwise your nomination will not count!  Thanks ever so much 🙂