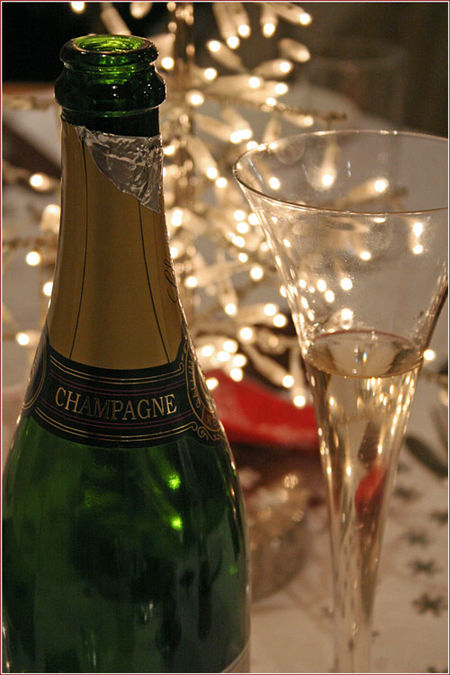 I know I promised to announce the winner of the “guess where CookSister is shivering on a beach” competition on Sunday, but Real Life got in the way.  You probably won’t believe me when I tell you, but on Friday afternoon… our central heating stopped working.  Yes, the same heating that stopped working for a week in November and was extensively repaired. Only this time round, the temperature was around freezing point the entire weekend. Inside our lounge it was 46F (7C) at noon on Saturday.  It was just a barrel of laughs.

It’s fixed now (apparently the previous round of repairmen didn’t bleed the radiators and air got into the brand new pump, which promptly seized and died), so let’s put it behind us and get back to business!

December was a busy month, and I promise to post some recipes and restaurant reviews, but for now I just wanted to give you an overview, mostly in pictures. Nick got back snowy from Chicago – yaaaaay! He took this as a farewell pic of my beloved Bean. We spent a weekend in Gascony, exploring the Auvillar Christmas market and discovering a hidden gem of a restaurant (more on that later). I went to see the endlessly fabulous Coldplay at the O2 arena – no I wasn’t in the front row, they came to play 2 songs in the middle of the audience, 5 rows from where I was sitting!  And no, they haven’t morphed into a 5-piece, the guy next to Chris Martin is the actor Simon Pegg who joined them for these 2 songs on harmonica.  You can see my clips of Fix You (two clips), Yellow, Green Eyes featuring Simon Pegg and Jingle Bells featuring Simon Pegg on YouTube. Enjoy! We hosted a pre-Christmas lunch with all the trimmings at home. We had a fab Christmas lunch with Our South African friends Greg & Gail who are visiting from Sydney. We spent Boxing Day at Johanna‘s surrounded by laughter, kids, presents and food. And we celebrated New Year with our friends John and Suzie in… Jersey!

Although the first correct answer was from my friend Michelle, I had forgotten that I’d previously told her we were going to Jersey – so the first unaided correct guess was from the lovely Val of More than Burnt Toast!

And what is she getting?  Why, an authentic gift from Jersey, of course!  Black butter is a Jersey speciality – apple cider is heated together with apples, sugar, liquidised lemons, liquorice and other spices to make a deeply coloured, jammy preserve redolent with apples and spice.  Now imagine adding a bit of this to fudge made from the extra-creamy milk of the local Jersey cows…  Let’s just say Val is in for a treat 🙂  Congratulations!