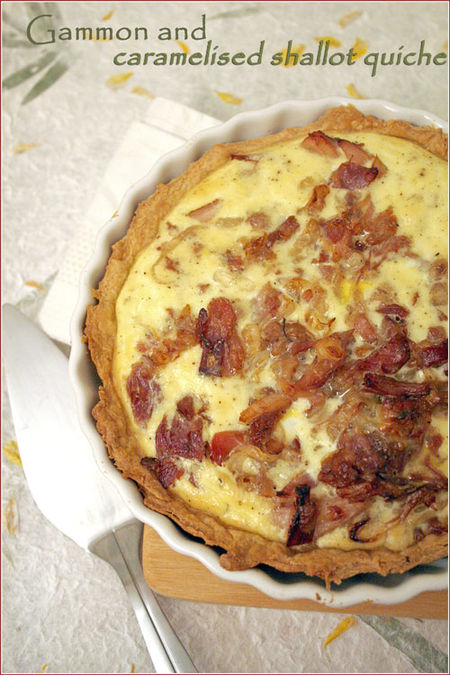 So has everyone recovered from the onslaught of Christmas eating and drinking yet?  I hope so, because tonight will be the second wave in the form of new year’s celebrations!  What are you all up to tonight?  We are with friends and I will try to post a visual clue later today so you can guess where we are.  I’ll be doing most of the cooking tonight, so I can’t spend too long blogging – I have to go and find some last-minute ingredients.

But before heading out to stock up for a new year’s eve dinner, most of us will still have to deal with all the leftovers from Christmas clogging up the fridge.  I’ve said it before, but it’s worth saying again:  I am thrilled at the current trend to save food and use leftovers creatively.  It means that my naturally frugal urges have been magically transformed from looking stingy to looking virtuous.  Think of me as Cinderella and the credit crunch as my glass slipper 😉

I have memories of the giant gammon that my mom used to cook, and the leftovers that seemed to go on for weeks in various forms.  (Incidentally, a number of you have said that you are unfamiliar with gammon and how it is different from ham – here is my comprehensive answer, covering ham, gammon and that apparent misnomer Boston butt!).  When we made gammon for a pre-Christmas lunch recently, we had a more restrained little deboned gammon, but there were still some leftovers. Not enough for another meal for 2, but too much for a ham sandwich, if you see what I mean. I had some shortcrust pastry dough in the fridge from one of the Christmas lunch starters I made (more on those soon!) and it wasn’t long before inspiration struck:  a gammon quiche!  As the meat is pretty salty, I reckoned we needed something sweet to balance it out, and what could be lovelier than some caramelised shallots, cooked together with the shredded gammon till it looks like pulled pork?  The end product was so good that it’s almost worth cooking a gammon just to get at the leftovers in order to make this 🙂 1/3 cup + 3 Tbsp plain flour
4 Tbsp cold butter (if you use salted butter, omit the salt from later in the recipe)
1 ½ Tbsp iced water
Pinch of salt

Preheat the oven to 220C.  Using either a food processor or your hands, rub the butter into the flour until the mixture resembles fine breadcrumbs.  Add the iced water and mix until the dough forms a ball.  You can add slightly more if  1½ Tbsp is not enough but be careful not to add too much water – you don’t want sticky dough! Wrap in clingfilm and refrigerate for 30 mins.

Roll out the dough to approx. 2mm thickness and press the dough into an ovenproof quiche dish or springform pan about 15cm in diameter.  Prick the base all over with a fork. Line the pastry case with baking paper and fill with baking beans.  Bake in the lower third of the oven for about 10 minutes, or until puffy and golden.  Remove the beans and bake for another 5 minutes.

In the meanwhile, whisk together the milk/cream and the eggs in a bowl.  Over medium heat, sautee the sliced shallots in a little butter, deglazing with the sherry so that they caramelise slowly and don’t burn.  Shred the gammon with a fork and add to the caramelised shallots to heat through.

When the pastry crust is done, spread the gammon and shallot mix evenly over the baked crust, and pour the egg mix over it.   Reduce the oven temperature to 190C and bake in the middle of the oven for 20 minutes or until set and puffy.  I also turned on the grill for the last minute or two to brown the top a little.