You are here: Home / London food blogger events / Wining and dining on the Frontline 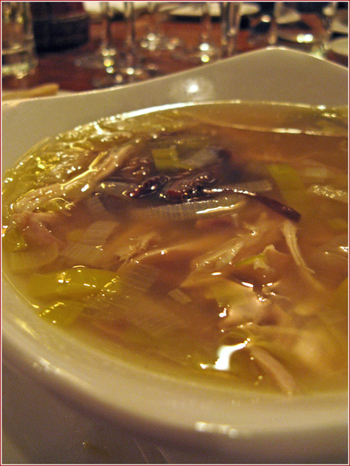 I’ve never much been one for danger myself.  No, no – I’m far too attached to my limbs and averse to sudden loud noises to want to go and put myself in harm’s way.  So how on earth did I find myself dining on the frontline (so to speak) one recent Saturday night?

Fear not, gentle readers – I certainly wasn’t going to put myself in harm’s way for the sake of a meal – even a really delicious meal with matching wines picked by Mr Superplonk himself, Malcom Gluck.  Oh no – the frontline I am referring to is the Frontline Club, a club founded by ex-frontline reporters, which exists to promote freedom of expression and support journalists, cameramen and photographers who risk their lives in the course of their work.  The club also run a charity supporting the families of local fixers killed while helping foreign journalists.  As part of their fundraising efforts, they operate a restaurant and a private club, and the latter is where I was invited for dinner by Graham of Noodlepie.  Not a dinner a deux, I hasten to add.  In fact, Graham himself wasn’t even able to attend, but in the spirit of blogger self-sacrifice he organised dinner tickets for his fellow-bloggers (me, Andrew and Fraser).

The evening got off to a convival start with glasses of Henri Bourgeois Petit Bourgeois Sauvignon Blanc (2006 –  France).  Not usually a great fan of Sauvignon Blanc, I had no complaints about this one as it was more gooseberries than green peppers, and that’s always a plus in my book!  We amused ourselves by playing “spot the other blogger” and I do believe I won the prize when I recognised Fraser from his blog photo 😉 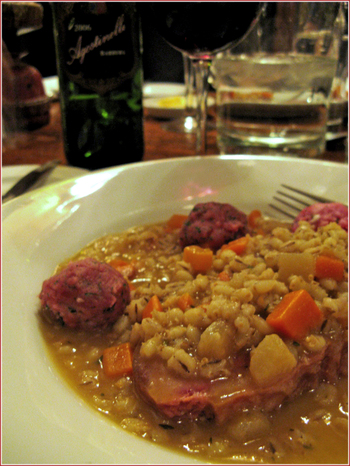 After being ushered to the table, Andrew and I found ourselves seated beside two couples who appeared to be regulars at these events and who instructed us in the art of tasting notes, Frontline-style.  Apparently Malcom Gluck likes to gather the tasting notes at the end of the evening and choose the best ones – the more outlandish the better. Our first course (courtesy of chef John Taylor) was cock-a-leekie soup, a traditional Scottish dish of leeks and potatoes in chicken broth, with a couple of prunes.  It was the first time I’d had this dish (traditionally the starter for Burns Night dinners) and I really liked the intriguing combinatio of flavours, although it does help if you’re a fruit-with-meat person – which I most certainly am.  To accompany the soup we had an Australian 1998 Voyager Estate Margaret River Semillon.  On its own, the wine was fine with a golden colour and the usual notes of dried hay.  But with the food, it was transformed into something altogether lovelier – maybe the prunes brought out some sweeter fruit flavours.  Either way, this was a fantastic pairing and one I’d recommend to anyone.

Less successful was the wine pairing with the main course.  The main course consisted of boiled salt beef with a pearl barley and carrot broth, served with beetroot and parsley dumplings.  The meat was tender (albeit salty… but then that’s salt beef for you!) and I really liked the pearl barley and broth.  The dumplings were slightly odd, in a way that made you want to taste them again and again to find out why they were doing such weird things to your tastebuds.  They managed to retain both the earthiness (and colour) of beetroot, and the baking-powder-ish acidity of unbaked scone batter, and like a tongue repeatedly finds a hole in a tooth, your tastebuds felt compelled to return to this odd marriage of tastes.  The wine was a South African 2006 Fairview Estate Agostinelli Barbera and it was amusing to hear how scathing our neighbours were about it.  I do believe “undrinkable” was one word I heard.  Poppycock.  Yes, it was a Big Wine and yes, it had Lots of Fruit and Alcohol.  I’d be willing to go so far as to say it might have been a little over-extracted.  But on a balance I’d have to say that I loved it. I have blogged about the Old World/New World tastebud divide previously and have pinned my colours firmly to the New World mast.  We have a lot of sunshine.  Our grapes develop more sugar and more ripe flavours than yours.  Deal with it!  But what I will say is that it was not a great match for the food.  With the restrained flavours of a lovely rare steak it would have worked beautifully, but with the saltiness of the beef and the fairly agressive flavours of the dumplings, it just felt as if two cats were fighting in a sack.

At about this stage of the proceedings, Chris Vallance of the BBC’s 5Live came sauntering over to us with microphone in hand, as Graham had warned he would.  We were ready (and ready to roll, thanks to a number of glasses of wine!), but our aforementioned neighbours were totally unprepared and suitably flabbergasted.  The conversation ran to “sorry, please excuse us, we have to do our interview now”.  “Interview?  What interview?” “Oh nothing, just the BBC.”  And so while they were picking their dropped jaws off the table, we did our interview.  I remember very little of the actual event (see reference to glasses of wine!), and was astonished when I heard the recording later that I’d managed to slip in the phrase “cognitive dissonance” in an interview on food blogging.  That’s what too much university education will do for you.  You can have the pleasure of hearing our mellifluous voices by visiting the BBC’s 5Live website 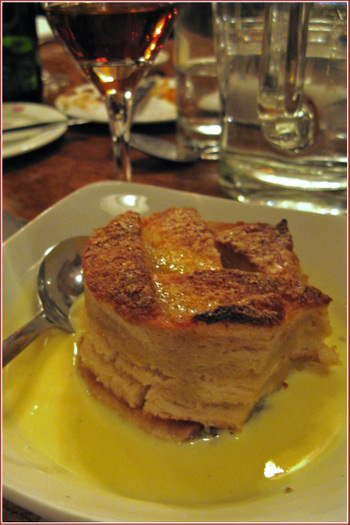 From there, we moved on to the cheese course which I neglected to make a note of.  From memory, there was a soft cheese from Ireland, a flavoursome Lancashire and an exellent Colton Bassett Stilton.  To accompany the cheeses we had a French 2006 Segna Le Roc des Domaine Anges Cotes du Roussillon, and to me it typified everything I don’t like about Old World wines.  The nose was politely described as “feral” but to me it took a turn into the less pleasant end of barnyard aromas.  In a tasting note that Malcom deemed good enough to read out at the end of the night, I believe I described it as “not so much feral as scatological!”.  It’s not a great introduction to a wine.  If you got past that, there was a lot of dark fruit which was appealing in a Christmas pudding-y sort of way, but the whole thing reminded me far too much of an unfriendly ruby port, and I was not convinced it was the best partner for cheese.

Dessert was a comfort food favourite – bread and butter pudding.  I liked the way it was served, in little individual towers. (The chef later told us that, rather than baking them in individual moulds, he had baked a large dish of pudding and then cut out these rounds after baking.  Clever.)  The pudding was already heavy and quite sweet, thanks particularly to a layer of quince jam in its depths.  It was matched with a Spanish 2004 Don Pedro Ximenez Toro Albala Dulce de Pasas Montilla-Morales, 2004, Spain. Now as a rule I like PX, but this one was a particularly unctuous and syrupy example of its kind, and togther with the sweet, heavy pudding, it was all just too much.  Something needed to lighten up – my tasting note described the PX as “all treacle and no tart”, and tart was something that was sorely lacking.  Still, Andrew didn’t complain when he got half my glass of the PX!

All in all it was a fun evening evening – there’s not a lot to dislike about good food, interesting wines and lively conversation, and even more so if you know you are supporting a good cause.  The Frontline Club hosts all kind of interesting events, from the kind of wine and food matching dinner that I attended to documentary film screenings to lectures – see their website for details of forthcoming events.

All that remains is a great big thank you to Graham for organising this – next time, though, it would be even better if you could join us!

« Quick pork chops with sherried mushrooms
Waiter, there’s something in my… pulses! »