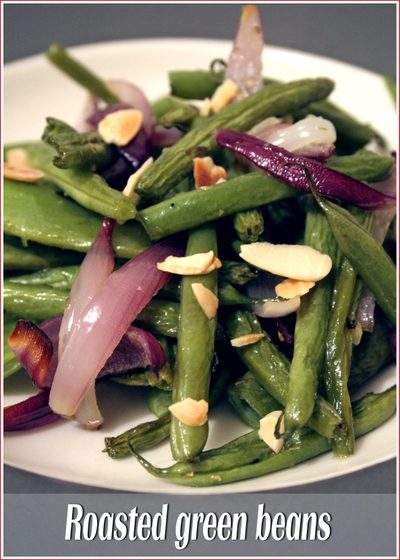 One of the very best things about food blogging is the fact that, if you regularly read other people’s blogs, you will have a never-ending supply of tried and tested recipes at your fingertips to inspire you every day.

Green beans (or French beans as they are also known) are some of the first vegetables I grew to like as a child, after peas and carrots.  There was something appealing abotu their cut-grass taste and their twirly tips, and I remember my mom telling me that my grandfather used to grow them in his vegetable garden and that as a child, she would eat the beans straight off the plant, still warm from the sun.  Although I never had the chance to do this, every time I bite into a breen bean I picture my mom as a little girl, biting into a bean in her Pretoria garden.

“French beans” is actually a misnomer as these beans were originally cultivated in South and Central America and were only brouight to Europe after the Spanish conquest. But whatever their nationality, they are rich in Vitamins A and C, as well as potassium, and are delicious when eaten raw or cooked.  If you add the high Vitamin C content of the red onions and high Vitamin E content of the almonds, you could almost say you were eating this purely for your health.  Only, it’s so delicious nobody would believe you! The beans stay fairly crisp but the roasting seems to bring out a nuttiness in them which steaming never does.  And I love both the sweeetness of the red onions and the crunch of the toasted almonds – a perfect combination.  Thanks Kalyn!

Pre-heat the oven to 200C.  Cut the green beans into 5cm pieces and toss in olive oil together with the onion slices and garlic until well coated.

Place the vegetables in a large, shallow oven-proof dish big enough that the vegetables form a single layer.  Salt and pepper to taste.  Pop the dish in the oven and roast for about 15 minutes or until the ends of the beans start to shrivel slightly.

Meanwhile, toast the almonds over medium heat in a dry non-stick frying pan.  Watch them like a hawk and turn frequently so that they don’t burnm and remove from the heat when they start to brown.

When the beans are done, toss them in a serving bowl together with the toasted almonds and a splash of lemon juice and serve immediately.

[And before you ask, yes it is winter in the UK and these beans are not locally produced – they came from Kenya.  In an aeroplane.  Being from Africa, I have very mixed feelings about the fanatical avoidance of foods flown in from there.  I do try as far as possible to buy produce grown in the UK, but I have to confess that when I see South African grapes (or Kenyan beans, for that matter) I do often buy them.  I figure if we boycott them altogether, that’s another source of income denied to a continent that urgently needs to find an alternative to foreign aid packages. Here is some further reading on that debate.]

I’m submitting this post as my entry to this week’s Weekend Herb Blogging, kindly hosted by Anna at Anna’s Cool Finds.