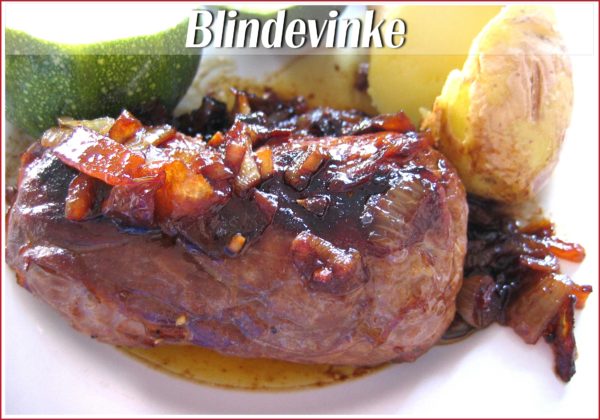 But how about finches?

No, don’t worry, not this little guy – you’d look like a cat eating a canary:  all bone-crunching and feather-spitting and not too much yumminess.  No, I’m talking about blinde vinken, which translates literally into “blind finches”.  I had grown up eating something similar to these in South Africa, where the butcher sold them as “beef olives” (apparently a Scottish recipe).  So it would seem that wherever in the world these are sold, people are intent on making up random nonsense names for them!  Finches, olives… what can that possibly have to do with a thin piece of meat wrapped around a filling?  I guess in the case of beef olives, you could say that the stuffed beef roll bears some sort of theoretical resemblance to a stuffed olive (tenuous, I know, but you come up with a better answer!).  The finch reference is even odder.

In the Flemish parts of Belgium there is a traditional sport known as vinkensport (finching) which involves finches competing against each other in a song contest.  Really.  The idea of such a contest was first introduced in 1569 and birds compete to see which one can utter the most “susk-e-wiets”  in an hour, obviously regarded anxiously by their human owners and judges who mark each tweet on a stick with chalk. (I am NOT making this up!)  There are 13,000 vinkeniers active in Belgium today and this is no novelty act – it’s serious business.  Spectacular competition wins are often followed by allegations of doping, and over-eager owners have been known to inject their birds with testosterone to encourage singing.  All competing birds are male and sing to attract a mate and mark their territory, so testosterone is the ideal pick-me-up.  The thing about finches is that they sing better when not distracted, so the practice arose of blindfolding the finches during competitions by wrapping cloth over their eyes – hence blind finches!  It is likely that some wag saw a similarity between the blindfolded birds and the wrapped-up “blind” meat parcels, hence the name.  Some people took the “no distraction” idea so seriously that finches were sometimes blinded with hot needles to make sure they were never distracted from their singing again, but blind World War I veterans successfully campaigned to have this practice outlawed in 1920.  Today, the finches merely sing in darkened boxes.  Whew. 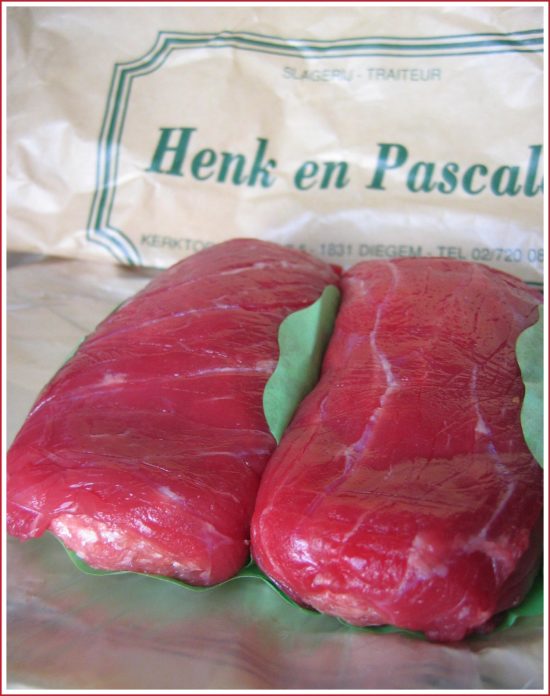 So if it’s not a bird in a box, what is a blinde vink?  Well, traditionally it is a thin schnitzel of veal, rolled around a filling of veal mince flavoured with herbs and spices (including nutmeg).  However, I have seen various variations on this recipe including the substitution of beef for the veal, or the Dutch version (called slavinken) where pork mince is wrapped in bacon.

And how did these Flemish delicacies find their way to me?  Well, actually, I found my way to them!  In the summer, Nick’s company very kindly sent him off to Brussels for a month and sent me train tickets to go and visit him over weekeneds.  Woo hoo!  Which is how I ended up one balmy Sunday in June in a little rented apartment in Etterbeek in Brussels, gazing over the rooftops at the sunset, watching the swallows perform aerobatics, and helping Nick to prepare dinner.  I was in charge of vegetables (courgettes rondes bought from the market that morning – although I still called them baby gem squash!) while Nick did the blinde vinken according to instructions that a concerned Belgian colleague had given him.  Since he had a cupboard of Belgian beer to choose from, we were not short on braising liquid, and in the end we plumped for Grimbergen, figuring that its dark, rich taste would be a good match for the meat.

Braising suits these little guys down to the ground as they are quite chunky and simply frying them will carbonize the outside and leave the inside raw.  By braising them, you can brown the outer layer of meat and then cook them slowly until the middle is cooked.  And this way, not only can you get the world’s most perfectly caramelised onions, but you can also get a rich, beery reduction that infuses the meat with its delicious flavour. 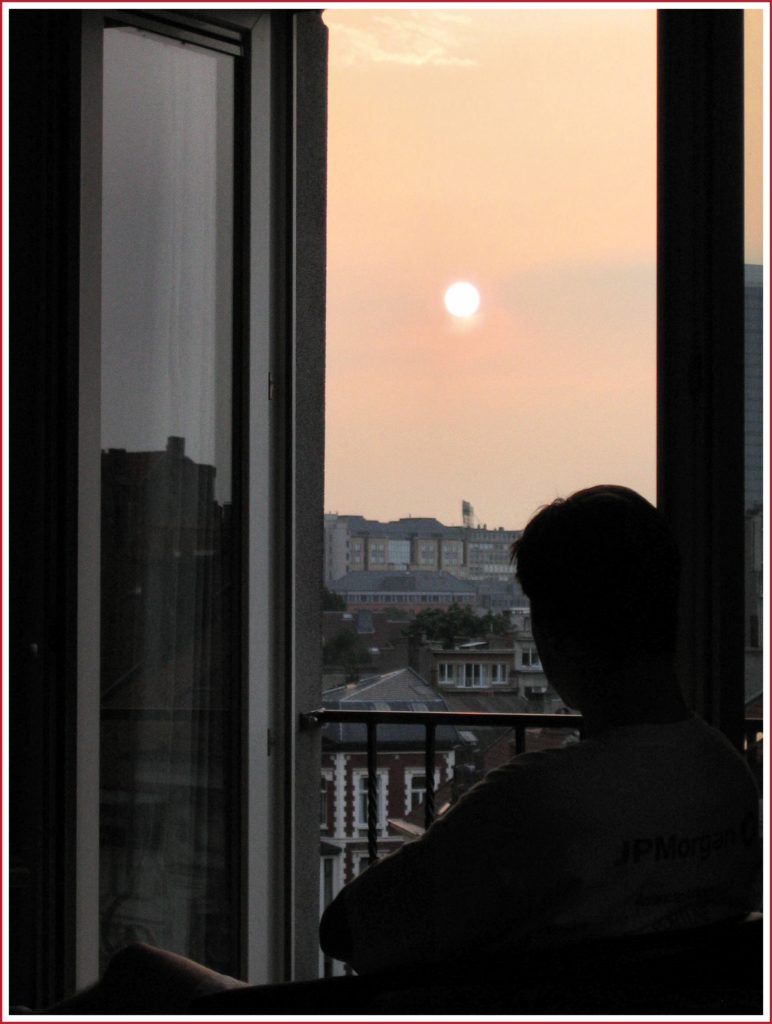 Method
Heat the oil in a heavy-bottomed pan over high heat.  Add the Blinde vinken and brown on all sides.  Turn down the heat to medium and add the onions and garlic.  Fry until the onions are translucent and softening, then ad enough beer to cover the base of the pan to approximately 0.5 cm depth.  Allow the liquid to cook away, then add more beer, stirring the onions and spooning some over the meat.  Repeat, allowing the fluid to cook away and the onions to caramelise, for about 30-40 minutes or until the meat is done and you have a nice panful of beery caramelized onions.  Ours were served with boiled new potatoes and courgettes rondes – and a lovely Brussels sunset.

Ages ago, somewhere at the start of my current frenzy of blogging events that started with NaBloPoMo, the lovely Ilva tagged me for for an event that involved your favourite braising recipe (braise (v): to brown meat and then cook it slowly in a small amount of liquid). Well Ilva – this is it!  Thanks for the tag 🙂

« 1802 @ Museum of London Docklands [CLOSED]
Skeletons in the pantry »