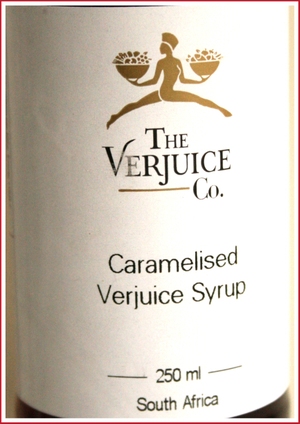 One of the things that I like most about travelling is that I get to shop for exotic ingredients on every trip.  Sometimes I do my research so as to make sure I come back with whatever product the area that I am visiting is best known for.  Other times I just wander around the shops until something catches my eye – and that’s precisely how I came into possession of a bottle of caramelised verjuice syrup.  I remembered reading something recently about verjuice, so I picked up the bottle and brought it back to the UK with me.  And there it sat on my shelf until a month or two later when I finally opened and used it.  One taste was all it took to convince me I had something special in my possession.

The name verjuice comes from the old French vertjus – literally green juice. It was traditionally made in wine growing countries by pressing the unripe, green grapes thinned from bunches early in the growing season to make the remaining grapes stronger. The green grapes were crushed and then either yeast was added (to aid a gentle fermentation) or salt was added (to limit fermentation). Either way, the lack of sugar in the unripe fruit put a damper on any potential fermentation so it’s a very mildly fermented product, acidic but with less bitterness that vinegar. The fermented version could be kept for a reasonably long time, while the unfermented version had a fresher taste but a shorter shelf life. Where grapes were not available, crab apples were commonly used, although any acidic fruit would work.

Traditionally, verjuice was used as an acidulator, particularly (since the 18th century) in the making of mustard. It is said that the replacement of vinegar with verjuice in the making of Dijon mustard is the secret behind its smoother and less tangy taste compared to English mustard. But sadly, verjuice fell from favour during the early 19th century. Crusaders returning to Europe brought lemons from the Middle East and just like that, a far easier source of acidic juice was found. Which meant that verjuice’s time in the spotlight was over. Until the late 20th century, that is, when Australian Maggie Beer spearheaded a revival of verjuice.

So what does this have to do with South Africa? We are one of a select group of countries where commercial production of verjuice has once again started on a small scale. Instrumental in all this are the multi-talented Janice Botha and Diane Heynes and their Verjuice Company. Janice worked for many years in film production before following a dream and designing, building and opening a restaurant at Scarborough (near Cape Town). Her interest in verjuice was piqued after receiving Maggie Beer’s recipe book as a gift and the seed that was to grow into The Verjuice Company was sown.

The first commercially-available vintage was the 2002 vintage made from Pinotage grapes and it sold out completely. And from there, demand for the rather lovely onion-skin coloured liquid has grown exponentially. It is available through many Woolworths stores, as well as delis and speciality shops throughout the country. I discovered it when I bought a bottle of their caramelised verjuice syrup at the lovely Dessie’s in Port Elizabeth, which bottle has since been put to good use drizzled liberally over my prosciutto-wrapped grilled nectarines.

So why use verjuice when lemon juice and vinegar? The main and best reason is simple: whereas vinegar and lemon juice will clash with the taste of whatever wine you are serving with the meal, verjuice is far more closely related in taste to the wine and will compliment the wine to a far greater degree.  Here in London, verjuice is still seen as a pretty exotic ingredient, so it’s nice to know South Africa is on the culinary cutting edge!

If you have a bottle of verjuice but are at a loss as to how to use it, here are some ideas:

– instead of vinegar or lemon juice in salad dressings;

– instead of white wine or brandy when deglazing pans;

– cutting the richness of sauces or meat dishes, especially with pork;

– instead of balsamic vinegar when caramelising onions;

– heavily reduced as a topping for ice cream (or be lazy and buy the caramelised syrup!); or

– in the preparation of mustards.