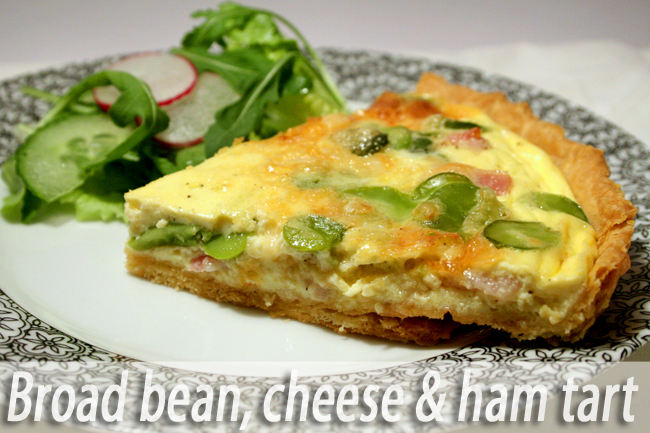 After spending a summer complaining relentlessly about how awful the weather was (and trust me, it was awful!), I am pleased to say that we have been blessed with a glorious autumn.  There were some gorgeous days at the end of last week and even I have to admit that today was such a glorious morning that my walk to the station was an autumnal joy!  There was no wind, all the trees were clad in their gaudiest yellows and reds and the little Shetland ponies from the stables next door were scampering about on the football field as if they were lambs in Spring.  In fact, from the spring in my step and the smile on my face, you’d think it was in fact Spring!

But alas, a look at the fruit and vegetable section in our local shops will tell a different story – all squash and pears and Brussels sprouts, with not a broad bean in sight.  So I guess it really is Autumn… but that doesn’t stop me remembering fondly what I made with the last of the organic broad beans that I found in Waitrose last month.  I have written about broad beans a number of times on this blog already, so I won’t give you their pedigree again – you’ll find all the amusing broad bean trivia in this post; from how Pythagoras advised his followers to avoid them, to how they may relieve the symptoms of Parkinson’s disease. 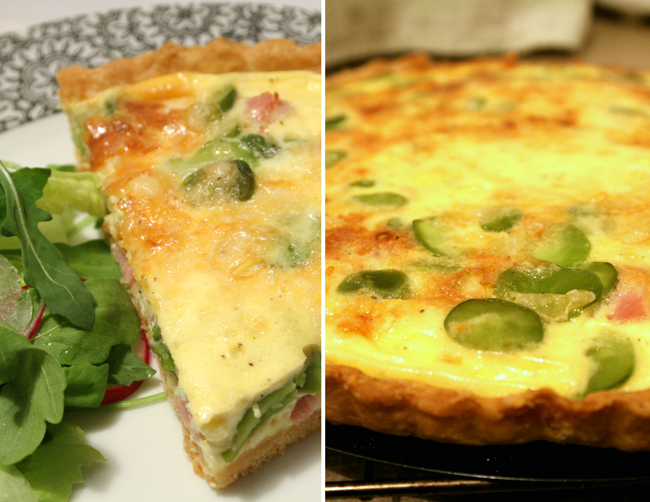 The recipe is an adaptation of one that appeared in a BBC Good Food magazine a couple of years back – and as usual, the baking experience was fraught with ingredient substitutions, incorrect equipment and a general misunderstanding of how long it takes to make your own pastry!!  As the the latter comment, though, don’t be put off doing it for this reason.  It truly was a spectacularly light and flaky pastry and streets better than ready made.  So what were the substitutions?  Well, lurking in the fridge was a small round of excellent Ford Farm smoked cheddar (a memento of a trip to the Cheddar Gorge, naturally!) that needed eating, so I used that instead of the suggested Lancashire cheese.  I also did not have ham in the house, so I used bacon instead.  Both of these substitutions worked really well and I can recommend them.  Of course, my fluted loose-bottomed flan tin was not quite the recommended diameter, as well as being too shallow (oy vey!), so the tart was probably a little flatter than intended, and I had both pastry and filling left over.  This was easily solved, though, by using my little mini loose-bottomed flan tins to make 2 mini-tarts which Nick had for lunch the next day – apparently it’s also delicious cold! 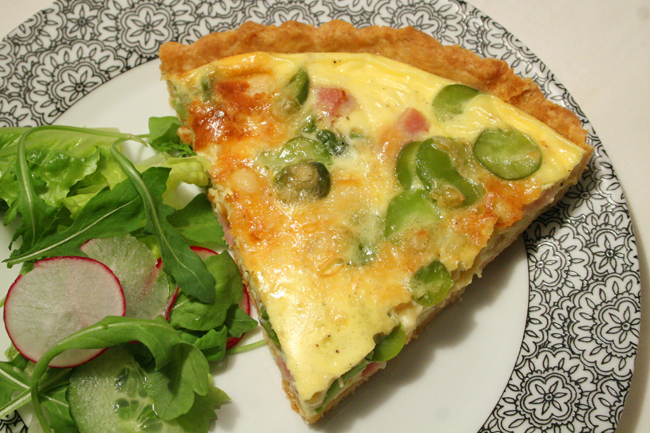 Put the flour, butter and salt into a large bowl and mix briefly with an electric mixer.  Then add the egg and beat until it forms small clumps. Remove from the bowl and form it into a ball, using your hands.  Wrap the ball in cling film and chill for about 30 minutes.

Roll the pastry out on a lightly floured board to fit a 4cm deep, 23cm round loose-bottomed flan tin. Line the tin with the pastry, prick the base with a fork all over and chill for at least 30 minutes.

Cook the shelled broad beans in boiling salted water for 3-4 minutes until just tender, drain and refresh in cold water. Although you can use them as they are, I prefer to double-pod and remove the greyish membrane that encapsulates each bean – takes a bit longer but gives a more delicate flavour.  It’s up to you.  If using bacon instead of ham, fry it, drain and reserve.

Scatter the beans and bacon/ham in the pastry case and sprinkle the grated cheese on top (or just crumble the cheese, in the case of feta or Lancashire cheese). Whisk together the eggs, crème fraîche and milk and season with salt and pepper. Pour over the beans and bake for 30-40 minutes until golden brown and puffed. Serve warm, with a crunchy green salad.

I’m submitting this post as my entry to this week’s Weekend Herb Blogging, kindly hosted by The Expatriates Kitchen – send your entries to Beth by Sunday.

« A post a day for NaBloPoMo 2007
Pizza inspirations – fig, Brie and Prosciutto »