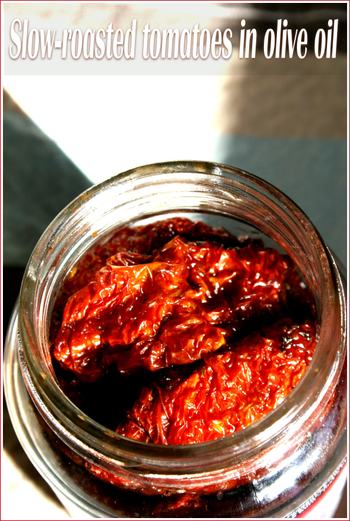 I have an admission to make.  For a large part of my life, I didn’t eat tomatoes.  I picked them out of sandwiches, I ordered salads without them, I arranged them on the side of my plate in a line of evil, red half-moons.  I remember having debates with friends at university on why exactly the tomato was the most revolting of all fruits (I think in the end the consensus was that the slimy pips get everywhere and then petrify – who hasn’t encoutered a library book where the pips from a long-forgotten tomato sandwich have become a permanent attachment to the prose?).  My friend Bronwyn was always happy because when we dined out together, she got double rations of tomatoes as I ditched mine.  And she was none too pleased when Nick (aka Tomato Boy) appeared on the scene and took her place as my preferred recipient of discarded tomatoes.

But then something happened:  I discovered sun-dried tomatoes.  Something about the intensity of their flavour struck a chord in me.  And, of course, because they were dried, the slimy pips were no longer an issue – hurrah!  From there, it was a short hop to eating baby plum tomatoes.  Oh, that sweet flavour, oh how cute, and popping them in your mouth whole once again meant no pips.  Things were definitely a-changing.  And sometime after that I went full-blown: I started eating tomatoes.  Any tomatoes.  I started expressing an opinion on good tomatoes and bad tomatoes. I started ordering caprese in restaurants.  Nick’s days of double tomato rations were well and truly over.

But I still hanker after that intensely tomato-y taste of dried or semi-dried tomatoes, which is why the current flurry of slow-roasted tomato recipes doing the rounds on the food blogs caught my attention.  In particular, I took a long look at Alanna’s master recipe and Kalyn’s take on it and soon my mind was made up – I would spend a Sunday roasting tomatoes! One quick trip to the Queen’s Market later and I had about a dozen large tomatoes and a whole day at home.  Bliss.

I made a couple of modifications to the recipes, but basically followed their route.  Why argue with the experts 😉  I must warn you – don’t do this unless you have a LOT of time as it does take all day.  I also could not find Roma tomatoes, so I just got vine-ripened ones and it worked just fine.  The herbs can vary according to your taste or what you have available, and the sugar is my personal preference.

Wash the tomatoes and cut into halves or into quarters, depending on the size and your taste.  I did quarters.

Miw the oil and spices together in a large bowl and toss the tomatoes in the mixture until well coated.

Spray a baking sheet with olive oil and arrange the tomatoes on it, cut side down.  Sprinkle with salt and pepper, as well as a tablespoon or so of sugar.  You can also spray a little more olive oil on them.

Place the baking sheet in an oven that has been preheated to 120C or 100C (depending on how patient you are!).  Sit back, relax and wait for the house to start smelling glorious.

You will begin to see a difference after 2-3  hours – a little shrivelling.  Check them after about 7 hours and if using quartered tomatoes like me, flip them onto their other cut side.

After 9-11 hours, depending on the temperature of your oven, they should be ready. The tomatoes should have shrunk to about half to a third of their original size, the skin should be puckered and should be able to be pinched off with relative ease.

Remove from the oven when done.  Alanna and Kalyn both say to remove the skins while they are still warm, but I rather like having the skin on (plus it’s less work for me!).  From there, you can either use them immediately, freeze them in batches to use throughout winter, or do what I did – put them in a glass jar, add a couple of garlic cloves, cover with olive oil and store them in the fridge while thinking about recipes in which to use them. Should you be slightly more serious about preserving them for longer, sterilise your glass jars before adding the tomatoes and oil and seal before storing in the pantry.

Don’t be put off by the long cooking time – these are seriously worth it.  The slow roasting intensifies the tomato flavour and the sprinkling of sugar gives a slightly caramelised flavour.  I have had them on pasta (recipe to follow soon), on pizza and in sandwiches and they are fantastic in all three incarnations.  Or eaten straight from the jar as a snack. Not that I would do such a thing…!

This post is my entry for this month’s Waiter There’s Something in My… savoury preserve!  The host is Johanna – keep an eye on her site for the roundup!