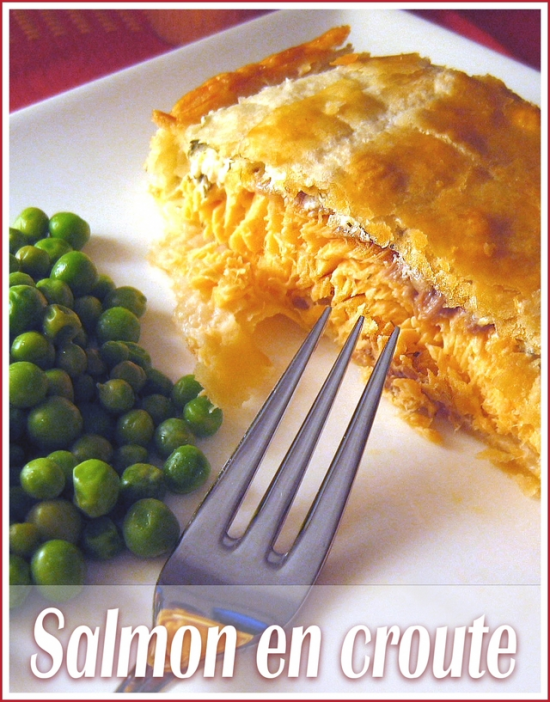 As far as I’m concerned, one of the best reasons for living over here in England is the salmon.  Growing up in South Africa, I think I can count on the fingers of one hand the times I had fresh salmon.  Smoked salmon – yes, every special occasion.  Cape salmon – quite regularly.  But the unsmoked pink stuff – almost never.  The reason is not hard to find:  salmon simply does not live in our neighbourhood of the ocean, and there is not much of a market for expensive imported fish when you have plenty of local species on your doorstep.  No, I only discovered fresh salmon in a big way when I moved to London and then it was definitely love at first bite.  First, of course, there is the gorgeous deep pink colour.  Then there is the firm texture and subtle yet delicious flavour.  And last, there are (astonishingly) the health benefits!  I had actually developed a taste for something that was good for me.  Who would have imagined.

But like with any love affair, that first rush of infatuation never lasts and soon you are mired in the every day practicalities of life, forgetting that first rush of excitement and taking each other for granted.  But I was jolted out of my complacency when I went home for Christmas in 2005.  My friend Andrea and I were cooking a special Christma Eve dinner for our families and as Andrea did not eat meat, we wanted a fish-based show dish.  No problem – we’ll make salmon en croute.  Well, we would, if we could find the salmon to do it with!  We scoured the fish shops and supermarkets to no avail and finally found some exorbitantly expensive Norwegian salmon.  It was a rude awakening after London, where salmon is as plentiful as chicken.

Our Christmas attempt was pretty good, considering we had no recipe and were relying on our non-existent salmon en croute instincts.  We par-cooked the salmon fillets (unnecessary) and made a Parmesan-based cheese sauce to spread on top of the fish in the pastry parcel (similarly unnecessary).  I was pleasantly surprised that the parcels looked even vaguely as expected when we opened the oven later.  But something about those parcels did not work for me.  Maybe it was the Norwegian salmon, maybe it was the sauce, but it was just not as spectacular as I’d hoped.  Oh well.  But I always said I’d give it another go, and in a fit of enthusiasm about a month ago, I bought a whole side of salmon.  Which ended up in my freezer, making me feel guilty every time I opened the door.  But what the hell was I meant to do with a piece of salmon as long as my forearm, other than cut it into fillets, which seemed to defeat the object of buying such an impressive piece of fish in the first place?

Inspiration arrived in the form of an e-mail from my friends Greg and Gail, annoucing that they would soon be in London as part of one of their regular trips abroad from Sydney.  We arranged to have dinner at our place and immediately I started thinking about the menu as they are both foodies and I hate to disappoint guests that have travelled so far!  It didn’t take long for my thoughts to turn to the giant side of salmon sitting in my fridge, and so a meal centred around salmon en croute was born. “En croute” literally means “in a crust” and refers to food cooked while wrapped in a pastry crust – beef Wellington is a form of beef en croute.  The benefits are that the parcel formed by the pastry, together 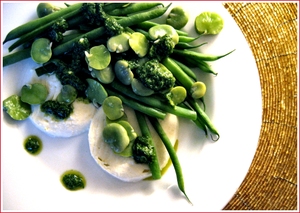 with the butter seeping from it during cooking, combine to keep whatever you are cooking moist and delicious while the crust turns crispy and golden.  A perfect combination of tastes, and a specatcular-looking dish to impress guests!

I served the salmon en croute with a vine tomato and arugula salad, and lemon-buttered peas.  It was preceded by a starter of green bean, broad bean and mozarella salad (pictured) and followed by a dessert of gingery baked nectarines.  And the whole lot was washed down with a truly remarkable bottle of white Bordeaux from Graves, which is rapidly becoming my New Favourite White. 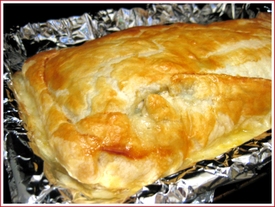 Remove the puff pastry from the fridge to warm up to room temperature before unrolling.

Sautee the onion in a little olive oil until soft and translucent.  Set aside.

Remove any skin from the salmon fillet carefully with a sharp knife.  Check for any obvious bones and remove them.  Rinse the fillet and pat dry with paper towels.  Sprinkle with lemon juice, dried parsley, salt and pepper.

Roll out the puff pastry until it will be big enough to wrap the fish.  Spoon the onions onto the pastry slightly off centre, in approximately the place where the fish will lie.  Place the fish on top of the onions.  Spread the creme fraiche evenly over the fish and sprinkle liberal amounts of dill over the creme fraiche.

Fold the pastry over the fish to form a parcel.  Moisten one surface of each pastry edge with egg white and seal securely.  Poke a coule of small holes in the top of the pastry parcel to release steam.  If possible, let the parcel rest in the fridge for an hour or so, or as long as you can.

Pre-heat the oven to 200C.  Place the fish parcel on a baking sheet covered in baking parchment and bake for about 40 minutes.  Remove from oven and show off to your dinner guests 😉 Cut into individual slices and serve.