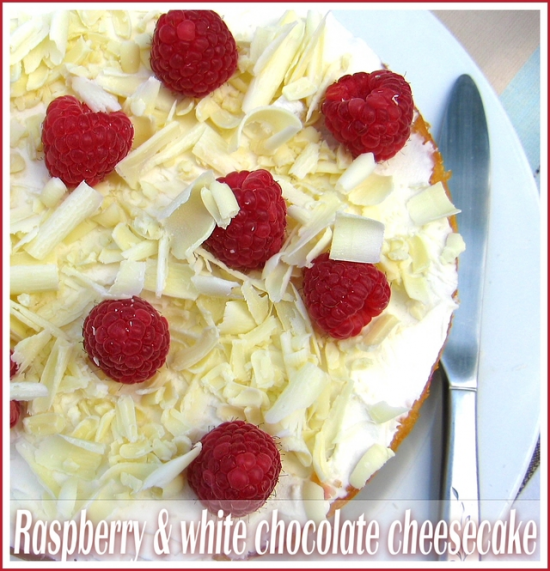 I will make a recipe for a number of reasons.  Sometimes, it’s because I have tasted something in a restaurant and fallen in love, and then try to recreate it at home.  Sometimes, it’s because I have an unfamiliar ingredient in my fridge and a particular recipe seems to be the perfect way to try it out.  Sometimes, it’s a desperate attempt to use up some stuff in my overflowing fridge.  And sometimes it’s simply because the picture accompanying the recipe is so pretty that I just can’t resist making it.  Most of my cooking falls into the first three categories, but a couple of weeks ago we had people over for lunch and I decided that, in keeping with the lovely weather (a rarity this summer!), I would make something totally girly and pretty and summery, and I could picture in my mind’s eye the old magazine clipping containing the picture of white chocolate and raspberry cheesecake.

I must admit up front that I’m a cheescake virgin.  It’s one of the cakes I have always enjoyed eating, far more so than, say, chocolate cake.  But it is also the cake that I’ve always been too intimidated to make.  I remember being brought up as a bit of a cheesecake snob.  Long before my contemporaries had even moved on from messy wedges of chocolate cake, I would be eyeing out the cheesecake on menus and would ask the waitress “is it baked or not?  I don’t want it if it’s not baked”.  Well, excuuuuuse me!  To me, gelatine-based cheesecakes were not really cheesecakes at all.  They were… fridge cakes, fridge tarts, whatever – but they lacked the consistency that made me fall in love with cheesecakes.  Ordinary cakes had an airy springiness.  Gelatine cheesecakes had a disturbing wobbliness.  But baked cheesecakes just have this incredible airless, wobble-less creamy density that I absolutely loved. 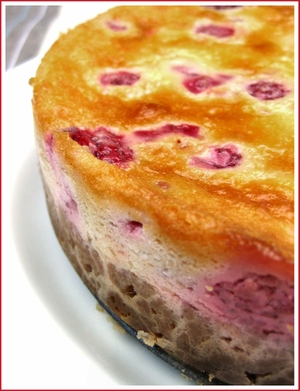 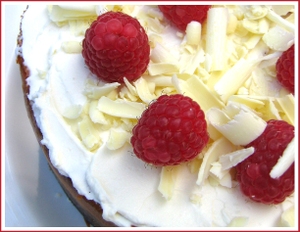 So it should come as no surprise to you that when I embarked on my first-ever cheesecake, it was definitely going to be a baked one.  As I said, the sheer summery exuberance of the picture is what attracted me to the recipe and reading through the recipe I was struck by how simple it seemed.  There were really only two things that marred my cheesecake perfection:  firstly, the fact that our crummy local supermarket (I hate it but it is the closest to our house…) had no fromage frais when we went shopping.  Instead, I guessed at ricotta for a substitute.  Now I don’t know what the difference in water content may be between the two, but the centre of the cheesecake never quite set as solidly as the edges and I am left with the sneaking suspicion that this may not have been the best ingredient substitution.  Secondly, the recipe calls for the cheesecake to be allowed to cool naturally in the oven.  Sadly, in my kitchen, there is only one oven and it was needed for making sweet potato wedges that day, so the cake half-cooled in the oven and then spent time in the fridge.  Not sure this was exactly the way forward either – next time I will plan  my time better.

But those two concerns aside, I must say that this recipe was a total breeze and a big favourite among the guests.  It took all my willpower not to eat the filling mix straight out of the mixing bowl as it was absolutely, decadently delicious.  Although I find white chocolate too sweet, it is offset here by the tartness of the raspberries and the two balance each other perfectly.  If you feel the chocolate curls are too over the top, you can choose to omit the topping and serve the cake uniced (pictured top left) – it looked equally lovely topless 😉

If you love cheesecake, then have a look at these cheesecake recipes by other bloggers: 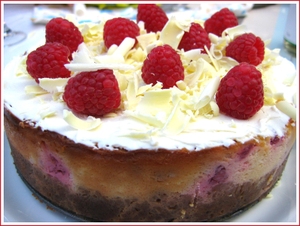 Preheat the oven to 150C. Melt the butter in a pan over low heat, then stir in the crushed biscuits and nuts.  Mix well and press the mixture evenly and firmly into the base of a 23cm springform cake tin.

For the filling, beat together the mascarpone and fromage frais, then beat in the eggs and caster sugar until smooth.

Break the white chocolate into smaller pieces and place in a heatproof bowl set over a pot of simmering water (or use a double-boiler if you have one).  Stir occasionally to check for lumps and remove from the heat when chocolate has melted completely.

Stir the melted chocolate into the mascarpone mixture, then carefully fold in the whole raspberries.

Pour the filling into the springform cake tin and spread it evenly.  Place the springform on a cookie sheet with raised edges – my filling seeped out of the join between the sides and base of the springform and made a mess in my oven.

Bake for about 1 hour or until just set (you can stick a skewer into the centre to check, or just gently shake the tin to see how wobbly things are).  Switch off oven, but leave the cheesecake where it is and allow to cool until completely set.

Release the springform tin and lift the cheesecake onto a plate.  Mix the remaining mascarpone and fromage frais in a bowl and spread carefully over the top of the cheesecake.  Decorate with fresh raspberries and chocolate curls (these are easy to make with a vegetable peeler) and serve.