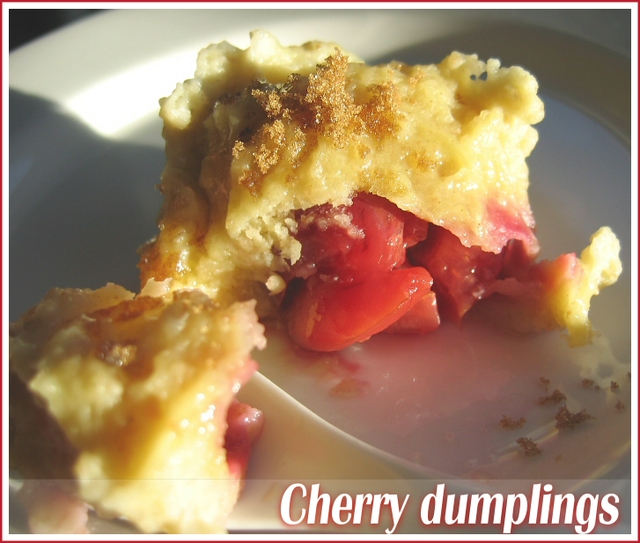 If you say the word “dumpling” to a room full of people, I can bet you that no two will think of the same dish.  It’s just one of those dishes that can manifest itself in so many ways that no two people’s old favourite family dumplings or local specialities will ever be the same.  Except for one small problem:  my family was never big on dumplings!  I think I remember one occasion where my mom made souskluitjies (traditional South African cinnamon dumplings), whcih I didn’t much care for in my youth, and that aside I have no other warm fuzzy family dumpling recipes.

As I have got older, I have warmed to dumplings.  I make and adore my own souskluitjies.  I have discovered that dumplings are heavenly in stews or on fruit puddings; and that they are even better Chinese-style as dim sum.  But then for this month’s WTSIM event, host Johanna threw me a curve ball.  Filled dumplings.  Yes, of course I could try my hand at dim sum, but I have been too madly busy at work getting ready for my holiday to want to engage in a fiddly dim sum session.  Plus there is nothing linking me or my culinary history in any way to dim sum!  And much as the idea of fruity dumplings appeal, surely they would be to heavy and stodgy in the middle of summer?  What to do, what to do…

As I was trawling the web for inspiration, I came across a recipe for Polish cherry dunplings.  Hmmm.  An idea began to take root.  You see, my father did rather a lot of family reasarch a decade or so ago, to try and find out who the first member of our family was who came to South Africa.  As it turns out, Jan Andries Horak had first set foot on Cape soil in 1745, in the employ of the Dutch East India Company.  There he married (four times!), fathered children and laid the foundations of my family in Africa.  From there, the records were relatively easy to trace and my father has a family tree showing each generation from my little nephews back to this founding father.  But what interested me more (and my father not at all) was where our family is from in Europe.  Although the surname is decidedly Czech, according to my dad’s research, Jan was born in Altdam, Hanover – but I could find no modern references to a place called Altdam.  However, some digging on the net revealed that Altdam on the north coast of the Prussian empire and until, 1945 it was part of the German city of Stettin.  However, after the war when boundaries were re-drawn, the city ended up as being part of Poland and is now known as Szczecin.  The closest approximation of Altdam in modern terms is Dabie, a municipal neighbourhood of Szczecin.

So… in a very roundabout way, I can make a case for a Polish connection to my family.  So when I saw a recipe for knedle wisniowe (cherry dumplings), I must have sensed a subconscious atavistic yearning for the cuisine of my forefathers (that’s my story and I’m sticking to it!!).  And in any event, I have always adored cherries as their arrival means summer really has come 🙂

I got this recipe from Starchefs.com  and I have to say that I am not convinced of the fluid/solid ratio of the batter.  OK, that said, I may have screwed things up a little by a) being too lazy to take out my mixer and resorting to melting the butter to mix with the egg yolks and breadcrumbs; and b) using a coffee mug as a cup measure for milk because the measuring jug was in the fridge, full of something.  I suspect that these two little lapses of judgement meant that there was too much liquid.  By the time I got to the bit of the recipe where you “form tiny dumplings” with the dough, my dough was more like crazy glue and absolutely not interested in holding any sort of shape, unless you consider impersonating an amoeba a shape.  So there I was, adding more flour in desperation, knowing that this would probably throw out all the other ingredient ratios but dammit, I had to get something made for WTSIM, even if it had to be the Cherry Dumplings of Doom.  Or maybe I just don’t make dumplings often enough to know what the right consistency is.  Either way, I’d already got to the stage of a recipe when you realise there’s no going back – ingredients have already been sacrificed…

Anyway, what I’m trying to tell you is that if you follow the recipe below, expect the dough 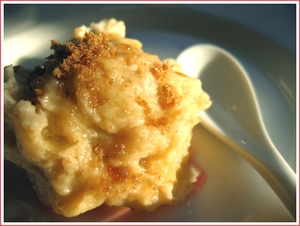 to be sticky and tricky to handle – if anybody has suggestions as to how to improve this, I’d welcome them.  My solution was to swear a lot and coat my hands copiously in flour while juggling the sticky dough from hand to hand and trying to persuade it to wrap around a cherry.  It’s all just non-stop glamour here at chez Cooksister.  Against this backdrop, I have to say that I fully expected them to be awful – I have no idea what they were meant to look like (mine just looked… erm… rough-textured and doughy) and had every expectation that my panic-adding of flour had not helped.  But despite the technical difficulties of getting them into the pot intact, they turned out to be delicious! Maybe a little stodgy, but with a lovely juicy cherry in the centre to lighten things up, and not too sweet.  Even notoriously dessert-shy Nick loved them.  Smacznego!

Combine bread crumbs, butter (softened but not melted), egg yolks and milk to form a paste. Mix in flour and salt, adding flour until the dough can be handled.

Shape into tiny dumplings, and insert 2 cherry halves into center of each. Drop 4 at a time into a deep pot of boiling water, and cook for about 5 minutes, or until they rise to the top.

Remove with a slotted spoon, drain and serve warm, topped with melted butter and sugar. 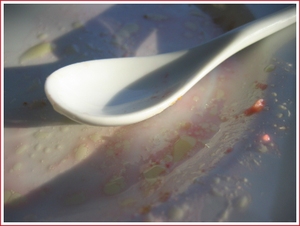