Sometimes I think this blog is where posts come to retire – I had a quick trawl through my draft posts and found dozens of the little buggers there, just sitting back, relaxing, playing bridge and waiting for their favourite TV soap opera to begin.  Not actually doing anything, just loafing around and taking up space – harrumph!  But unluckily for them, I’m on to their tricks now and I’ve decided to make them earn their keep by turning them into fully functional posts – starting with this rather lovely creation on your left.

You may recall that, a month or two back, I started telling you about a lunch I made at home for a few friends.  In a way, it was a Christmas-in-January lunch as we had tried valiantly to get together before Christmas but were prevented by crazy schedules.  So I wanted to treat them to something a bit special.  We started with pomegranate, fennel, pear and rocket salad and from there I wanted to move on to something meaty, but not too heavy.  Roast chicken?  Been there, done that.  Roast beef or lamb?  Too heavy.  A casserole?  Not pretty enough.  So in the end I turned to my all-time favourite standby food for friends:  pork fillet (aka pork tenderloin).

Pork fillets are great.  They’re not expensive, not fatty and they are a nice easy shape to freeze (unlike, say, a leg of lamb!).  You can braai them, you can stuff them, you can oven-roast  them, you can make medallions in a creamy sauce – in fact, they must be amongst the most versatile things you can keep in your freezer.  Which is clearly why they are permanent houseguests in mine!  Nick’s favourite thing to do with pork fillets is to stuff them with a mixture of pears, sage and sweet wine and cook them on the barbecue, but seeing as this is pretty much what we served to our prospective guests the last time they visited, another plan had to be made!  Eventually I found this recipe on The Pig Site which looked great, but as I am a great fan of stuffed pork, I adapted it slightly to add a simple dried apricot stuffing.  The pomegranate seeds were left over from the starter and the seared asparagus were an unseasonal treat.  Mea culpa.  This is a relatively simple and very impressive-looking meal and the sweet/sour tastes are fantastic with the pork – definitely a keeper.  Although the recipe below is for one fillet only, I just doubled up the quantities and did two fillets at once. 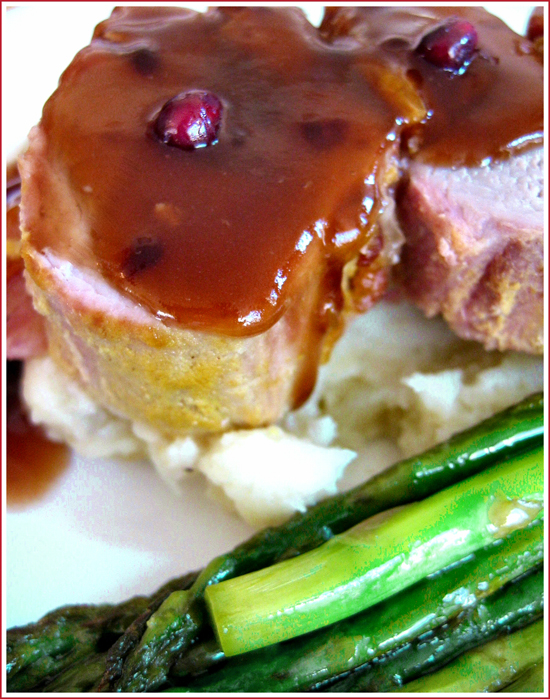 Boil the kettle and soak the apricots in boiling water in a shallow dish for 5-10 minutes to soften.  Pre-heat the oven to 180C (350F)

Slice the onions, preferably into segments rather than rings.  Break up larger chunks, mix the two colours and spread them evenly over the base of a small roasting pan.  Lay the rashers of bacon over the top of the onions in a single layer.

Trim any sinewy bits off the pork fillet and make an incision along the length of the fillet to create a pocket – taking care not to slice right through to the ends.  Mash the softened apricots with a fork and spread the mixture into the incision in the meat.  If you are really organised you can sew or tie the incision shut, but I didn’t bother.

Smear the mustard all over the pork fillet and lay it on top of the onions and bacon.  Sprinkle the top of the meat with the sugar, as evenly as possible.  Cook in a pre-heated oven for 25-30, then remove from the oven.

Pour off the cooking juices from the pork onto a small saucepan and allow the meat to rest for at least 5 minutes.  Bring the cooking juices to a simmer before removing from the heat and stirring in the port (I also added a spoonful of thickening granules).  Carve the meat and serve.