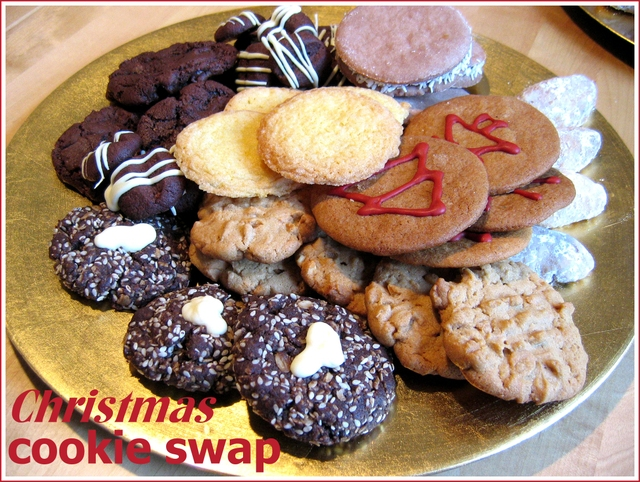 So Christmas has been and gone, as has new year – and as much as I try to pretend I’m still on holiday, the harsh reality is that I am back at work, and it’s high time I got back to regular blogging!  And what better way to do that than to finish off some unfinished business from last year and tell you about the London food bloggers’ Christmas cookie swap.

Since Christmas is traditionally a time for baking (in fact, one of the Very Few Times that I actually get up off my butt and bake!), we decided that this would be the perfect time for a bunch of bloggers to get together and exchange their Christmas cookies while imbibing a lot of mulled wine.  It’s not as if we need much encouragement to get together 😉  And so, at the appointed time one Saturday in December, we all descended on Johanna‘s house: Jenni, Xochitl, Bonnie, Bill, Laura, our honorary non-blogger Sarah and, of course, me and Johanna. 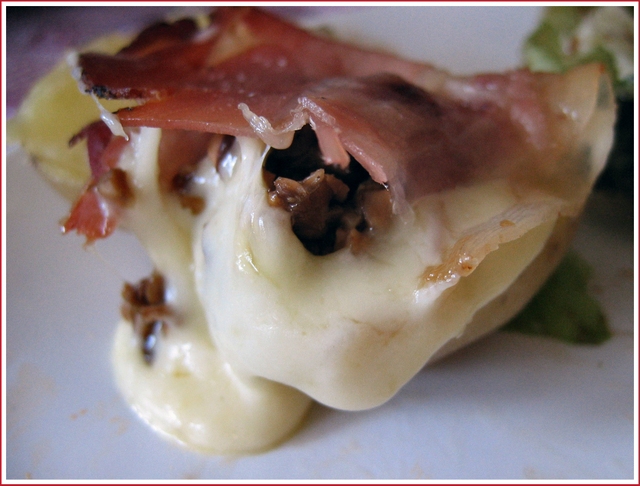 Because man (and woman, and blogger) cannot live by cookies alone, Johanna had decided to precede the great Christmas cookie swap with a little Austrian winter food:  a raclette and a cheese fondue.  Although you are probably all familiar with cheese fondue, that wonderful combination of melty cheese, tangy kirsch (or beer or wine) and a little cornflour to bind it all into a delicious gooey-ness into which you can dip bits of bread, raclette is less well known – at least in my neck of the woods!  Although we often used to have cheese fondue on a Friday night when I was a child, the first time I encountered raclette was outside Neal’s Yard Dairy at Borough Market.  First foremost, raclette is a type of cheese – a semi-firm pressed cheese made from cow’s milk and aged for 3-6 months.  It has a texture rather like Gouda but a tangier taste.  Since 2003 it has enjoyed AOC protection, meaning that only cheeses made in the traditional way, from local ingredients, in predefined areas (Valais, Savoie, Franche-Comte and Brittany) can be called raclette. 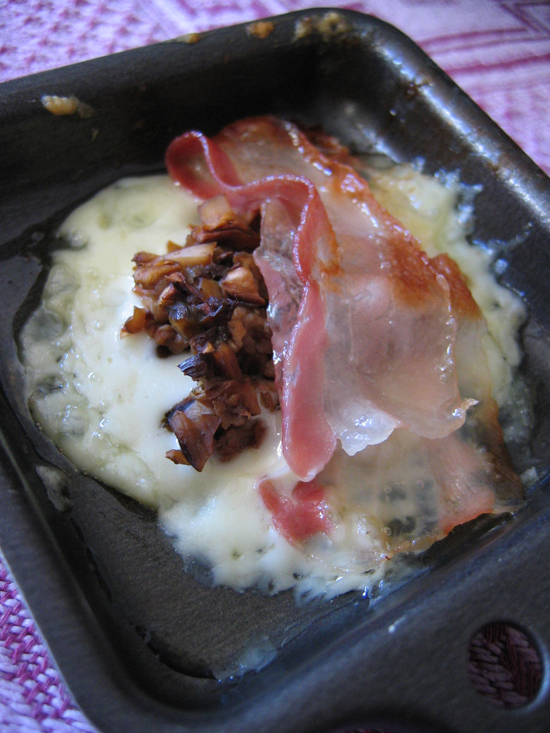 The term raclette can also be a dish similar in principle to a cheese fondue, made (unsurprisingly) with raclette cheese.  This is said to have originated in the Valais canon of Switzerland when farmers took food along while moving cows from pasture to pasture.  Usually they had some cheese and some bread, and my a happy accident, a round of cheese was left by the fire, making it warm and gooey.  The farmers so enjoyed scraping the melted cheese onto their bread that this became a tradition – voila!  The dish later developed to comprise melted cheese on boiled potatoes, served with cornichons or pickled onions, and this is the way that Neal’s Yard Dairy serves it from their Borough shop.  Now, clearly, Johanna was not going to be building a fire and leaving rounds of expensive cheese lying around her suburban house (!), so it’s a good thing there’s an alternative way to enjoy your raclette at home:  the raclette grill.  You simply pop some raclette cheese, garnish of your choice (we had a lovely mushroom paste) and maybe a slice of meat (pancetta in this picture) into the adorable little raclette pans and pop them under the table-top grill.  The hardest thing is a) remembering to remove yours before it overcooks and b) taking your own pan, not somebody else’s (sorry Sarah!!).  The cheesy, melty contents of the pan are then scraped onto some potatoes and eaten with cornichons on the side.  Heaven. 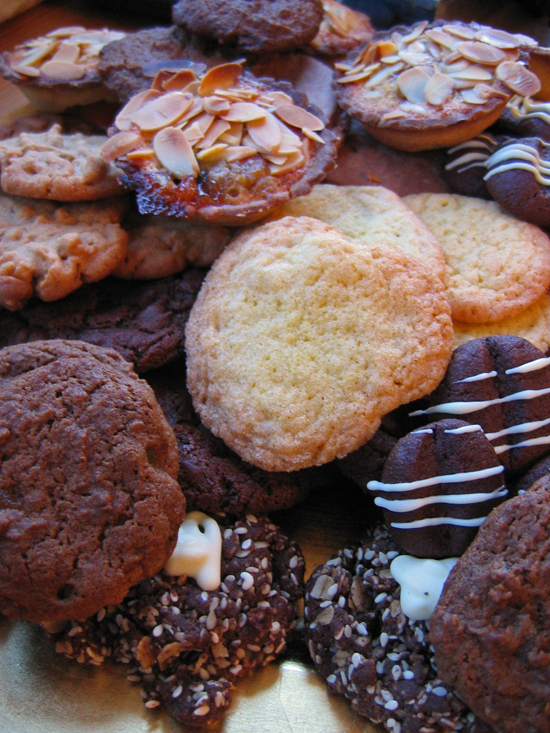 After rather a lot of cheese and mulled wine, we had a little rest before moving on to coffee and cookies – hurrah!  People realyl outdid themselves this year as all the cookies were delicious.  I don’t think I got them all on film, but let’s see if I can describe them correctly:

*  Johanna’s mocha-choca beans drizzled with white chocolate (visible on the right of this picture);

*  Jenni’s chocolate rounds sandwiched with dulce de leche and rolled in coconut (visible at the very top of the first picture);

*  Xochitl’s Mexican wedding cookies with cranberries (visible as four white lozenges on the right in the top picture); lemon sugar cookies (dead centre in the second picture); and Christmassy ginger snaps (decorated with red Christmas trees in the top photo);

*  Bill’s Bakewell-style fruit mince pies with homemade fruit mince (covered in slivered almonds and visible at the top of the second picture);

*  Laura’s ginger spice drop cookies (visible at the bottom left and right of the second picture);

*  Sarah’s double chocolate chip cookies (visible at about 10 o’clock in the top picture); and

Wow.  We quietly munched our way through A LOT of cookies that afternoon, making an effort to taste each one.  For my money (apart from my own cookies!), the favourites were Laura’s spicy ginger cookies and Xochitl’s crumbly Mexican wedding cookies, but let me assure you that I wouldn’t turn up my nose at any of these 😉  Of course the best part of the afternoon was right at the end, where we all grabbed our cookie tins and stocked up on each other’s cookies, so that the memory of a lovely afternoon could linger for days and days as we munched happily on each other’s cookies.  Now that’s  the spirit of Christmas!

For the voyeurs among you, here is a pic of all of us around the table, contemplating the mountains of cheese we are about to consume.  From left we have Johanna, Sarah, Laura, Owain, Bonnie, Xochitl and Jenni. 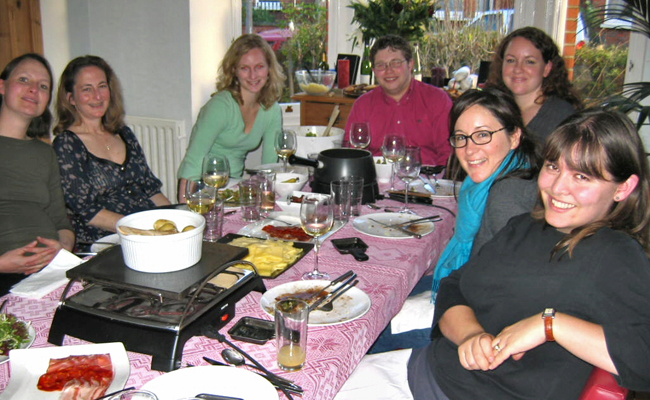 [And for those of you who have been wondering what is happening with the Menu for Hope III campaign, we raised… $60,000!  Thank you VERY MUCH to everybody who contributed in any way whatsoever.  That is a truly awesome total and the foodblogging community can rightly be proud of themselves.]

« “Waiter, there’s something in my…”
Twice-cooked oxtail stew »