You are here: Home / Uncategorized / Curried chicken salad – Food for a heatwave Part I 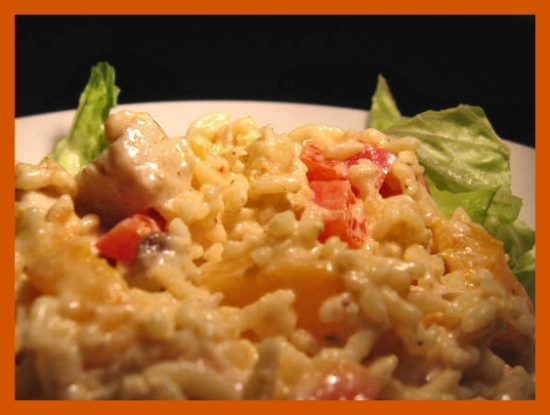 Few people could have failed to notice that London (and Europe in general!) experienced a real heatwave about a week and a half ago.  But before all the folks back home in SA roll their eyes and say “yes, it probably reached like double figures…”, let me just point out that I have seldom been so persistently uncomfortable for such a long time.

And to add to the rising temperatures (36C some days and HUMID!!), I was getting hot under the collar because people kept saying to me “but you’re from Africa – surely you’re used to this heat!!”  Well, yes and no.  Firstly, Africa is a Big Place, people – we have everything from deserts to tropics to snow and everything in between.  So it’s quite possible that where you come from, there is nothing like the temperatures we had during the heatwave.  Hell, even within South Africa you get contrasts:  the wet-winter-dry-summer Mediterranean climate of the Western Cape, the tropical hothouse of KwaZulu Natal and the high altitude extremes of Gauteng (which has a climate rather like Madrid – too hot in summer and too cold in winter!).  And then you get temperate Port Elizabeth where I spent 30 years of my life.  Not too hot in summer, not too cold in winter – one of the most temperate places you could hope to meet in fact.  So no, I can’t exactly say I am used to it because I’m not exactly from tropical Africa!

Also, in SA I lived by the sea, meaning that by late afternoon a cool sea breeze has almost always sprung up.  Here in London there is no such thing – the air hangs over the city like some sort of invisible duvet – dead, motionless, sticky air.  And it seems even worse at night…  Plus in South Africa, when the mercury hits 30, nobody hurls themselves into dark subterranean passages and onto trains together with thousands of other people in order to get to work.  Let me assure you there is little that is less pleasant than getting into a train where you can feel the rush of hot air like a wall the minute the doors open for you to get on.  Oh, no, hang on – there is something less pleasant – feeling the first bead of sweat running down the small of your back or the back of your leg, and all you’re doing is standing dead still!!  And last but not least, the houses in SA are designed to lose heat – the houses in England are designed to retain heat.  That’s all very well in winter, but it’s a real problem in summer, especially when your bedroom is on the first floor and you are sleeping below about half a metre of pink insulation!?!  Oh, and did I mention that we get mosquitoes in our little corner of London?  So leaving the windows open lets in some air – but also a squadron of whining blood-suckers.  Oh joy!

Anyway, this is a very roundabout way of telling you that it’s been hot – really hot.  And when it gets really hot I can’t stand being in out teensy little kitchen, nor do I have an appetite for cooking or eating hot food.  So starting from about 2 weeks ago, my cold dinner repetoire has been hauled out and severely tested, but I think it came out pretty unscathed – and we had some really yummy meals in the process.

So I thought I’d share a couple of them with you, starting with this one, which is always the first thing I crave when the weather gets hot and is a childhood favourite for which everybody’s mom had their own recipe.  I suspect it is related to Coronation Chicken, but has had a couple of tweaks along the way, plus you can play a little fast and loose with the ingredients depending on your likes and dislikes.  With the addition of the rice it makes a self-contained meal – and I think it tastes best when made with leftover braai (BBQ) chicken.

half a green pepper, finely chopped

half a red pepper, finely chopped

a stick of celery, thinly sliced

mayonnaise (plus a little milk to thin)

Boil the rice (don’t forget the salt!).  If using chicken breasts, season them and steam or microwave until cooked.  Cut into strips or cubes and mix together with the chopped peppers, onion, celery and peaches.  Add as much or as little of the cooked basmati rice as you like – depending on how far you need the food to go!). Mix curry powder to taste with a little milk and then stir into a dollop of the mayonnaise in a small bowl.  Add a couple of tablespoons of chutney (I leave the amounts up to you – depends if you want a saucy or a dry salad) and salt and pepper to taste before stirring it into the chicken and rice mix.  Serve in iceberg lettuce leaf “bowls” (you can scatter wach plate with toasted slivered almonds if you like), together with a fruity white wine – nothing too serious though!

The sweet, spicy, crunchy, chewy combination is just delicious and one of my favourite childhood tastes – guaranteed to cool me down whatever the temperature is doing!!

Other editions of Food for a Heatwave include: