You are here: Home / Events / EoMEoTE / Eggstra, Eggstra, read all about the EoMEoTE#17 roundup! 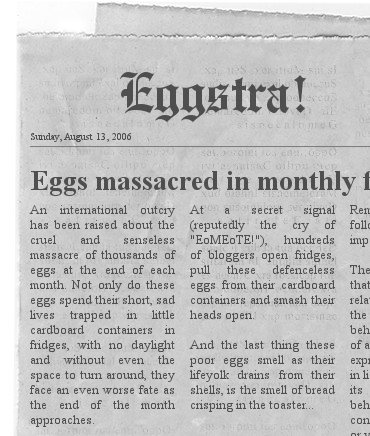 Yes folks, it’s time for the monthly tabloid shocker that is EoMEoTE – let’s see what muck our intrepid reporters raked up this time…

Reggulator threatens to step in as Elizabeth from Blog from our Kitchen  is caught in flagrant disreggard for EoMEoTE rules scandal!

Lexi from Catching Points snapped recipeless (but with great headlines) in Cannes!

And of course, the Cooksister reveals how jilted Bacon tells French Toast: “Get stuffed!”

And that’s all folks…  Thanks once again for playing along and making this such a very successful “tabloid headlines” edition of EoMEoTE.  I had a ball – and it looks as though you all did too!  EoMEoTE is back at the end of September – theme to be confirmed……