You are here: Home / Travel / Dubai / A postcard from Dubai 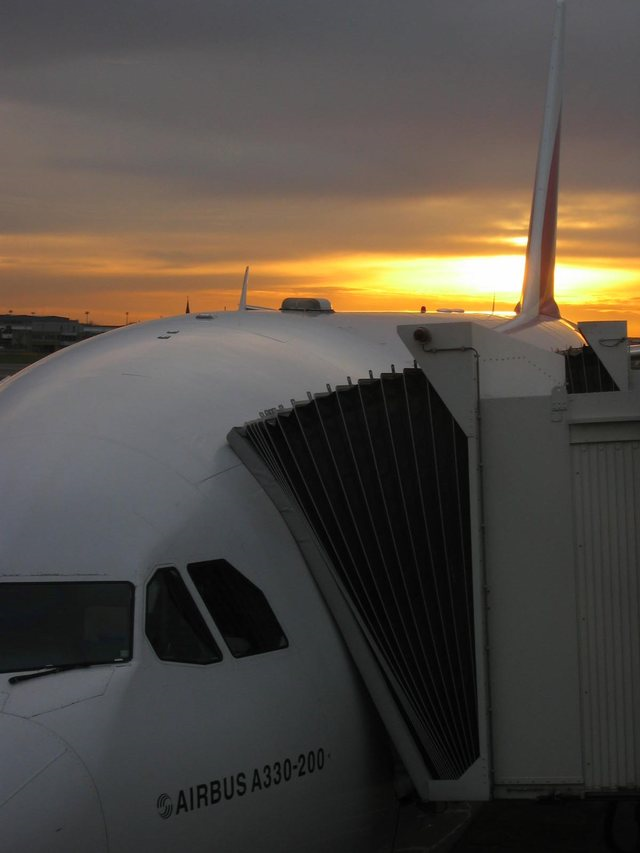 We arrived in the dead of night on Saturday morning (a toasty 24 celsius at 03h30), we being myself and Paul (he of the butternut soup) and checked straight into the Mövenpick hotel where we collapsed in a state of exhaustion. Yesterday we forced ourselves to get up at about 09h00 to try and get our body clocks back on track and headed out to check out the world. The hotel is close to the Wafi City mall – in fact we can see themall and its two big glass pyramids from our window. First thing we discovered is that Dubai is NOT geared towards pedestrians. There were precious few pavements or pedestrian crossings along the way but a LOT of cars!! Wafi reminded me of Las Vegas, only emptier:  a huge themed centre with lots of beautiful and expensive stores. We had brunch in the food court (a vegetarian pizza from Mrs Vanelli’s – thick crusted but with lashings of particularly moreish Mozarella) and then browsed the stores – Paul got a jacket for his job interview on Monday, but the prices were a little steep for me and my credit card which is still reeling from the recent visit to the USA & Mexico! From there we took a cab to the public beach which was the perfect antidote to wintry England – gently waving palm trees, the silhouette of the Burj al Arab hotel in the distance and aquamarine waves rolling in. Fabulous.  The sea breeze also takes the edge off the desert heat which was welcome. Then we ambled towards town, stopping to take come pics of the really impressive Jumeirah mosque. After Paul found a barber to cut his hair, we hopped into another cab and headed for the gold souk. 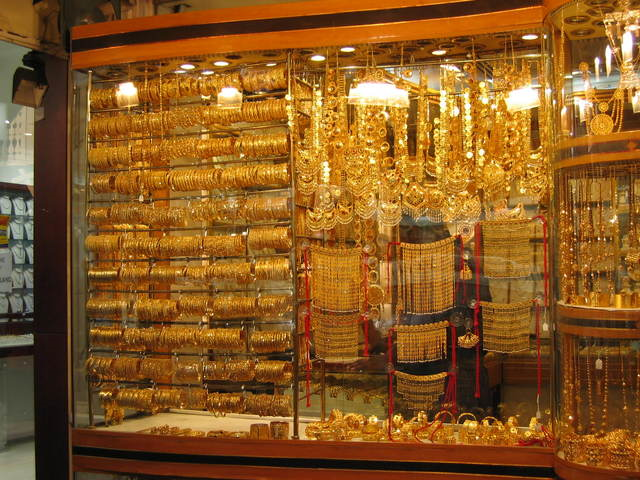 Now this is a must for anyone who has ever coveted gold jewellery or in fact anybody with magpie tendencies to gravitate towards sparkly stuff.  More gold in more different shapes than you can shake a stick at. From super-modern pieces to very ornate traditional Arabian pieces; from delicate neckchains to huge gold extravaganzas the size of your average mayoral chain. And everyone is happy to bargain.  J  After making it through there unscathed (my credit card, that is…), we explored some of the side alleyways that bear a remarkable resemblance to the markets in Granada (or, I suppose, more correctly, the markets of Granada bear a resemblance to every Middle-Eastern souk!). Oh my.  Sequinned shoes, beaded shawls, fantastic beaded belly-dancing outfits (every home needs one!!), pashimnas, gypsy skirts – and about a hundred people offering to sell you imitation designer handbags, watches and perfumes. It’s all really exotic and the bargaining is a great deal of fun. I can see how people come home from the Middle-East with enormous rugs – the salesmen make you feel like a long-lost sibling and seem positively distraught when you leave! Managed to come away with a fabulous beaded evening top and a 100% cashmere pashmina (which was only about £14!!). Then we went to an even more enchanting place – the spice souk. This is somewhere that every foodie should visit.  The tiny alleyways are absolutely crammed with big bags of spices and every shopkeeper is quite happy to explain everything to you. There are bags of frankincense, oregano leaves, dried chillis, rosebuds, every colour of pepper you have ever heard of…  It just carries on. The photo opportunities are incredible and the smells terribly exotic.  Just go!  From there we strolled towards Dubai Creek where there was a bustling dockside scene.  Porters in long white robes and turbans ran everywhere, ferrying produce from the market to and from the boats moored in the Creek.  The minarets of the mosques across the Creek were silhouetted against the sunset sky while flocks of gulls circled overhead.  African meets Asia in spectacular fashion.

From there it was back to the hotel to freshen up before we headed out to Lemongrass Thai restaurant around the corner from the hotel. The concierge had suggested a Chinese, an Indian and a Russian restaurant nearby as alternatives as well, but since we had Indian in London the night before we left, and I’m spoilt by our lovely local Chinese Yi Ban, and the Russian restaurant looked more like the Russian version of a greasy spoon, we opted for Lemongrass.  The décor is lovely and restful with thoughtfully chosen Thai artifacts and muted colours. I also particularly liked the crockery which was square and white with a green crackle-glaze centre (but then I’m a sucker for a square plate…!). For starters, I chose the Lemongrass vegetarian set, which included tempura vegetables (zucchini, I think?), something that resembled a very un-greasy potato rosti and cubes of deep-fried tofu, all to be dipped into a sweet & sour peanut dip.  Loved it all, except the tofu, but then I’ve never been much of a fan.  It just doesn’t taste like anything!  Paul bravely ordered the hot and sour soup and man, did it live up to its name! It was really delicious with lemongrass and galangal and a little coconut milk; floating in it were lots of mushrooms and some of the fattest, juciest prawns I’ve had in ages.  But lurking in there was also an abundance of red and green chillies which took the top of Paul’s mouth clean off. I wisely munched on the prawns and avoided the thermonuclear broth. But the flavour was truly delicious – I wish I had Nick´s tolerance for hot stuff so that I could have finished it!! For mains, Paul had the massaman beef curry which was perfect in every way. Chunks of tender beef in a medium, sweet sauce with peanuts to top it off. Yummy.  I had the gaeng garee gai (yellow chicken curry, having been scared off the green curry which was described as hotter than the yellow curry, and having witnessed Paul´s experience with the soup…) which was also delicious – a toned down version of the green curry and definitely not as sweet as the massaman. Both highly recommended and the portions are very generous – neither of us could finish ours.  Cooled down our fiery throats with delicious freshly squeezed juices – my mango juice was phenomenal. And the whole lot came to just over £25!  Bargain.

So that´s how we spent Day 1 in Dubai . Today was even more exciting – I was persuaded (don’t ask me how!!) to go on a desert afari which included dune bashing and a barbecue in the desert for dinner. More tomorrow. Suffice to say we are having a WHALE of a time 🙂