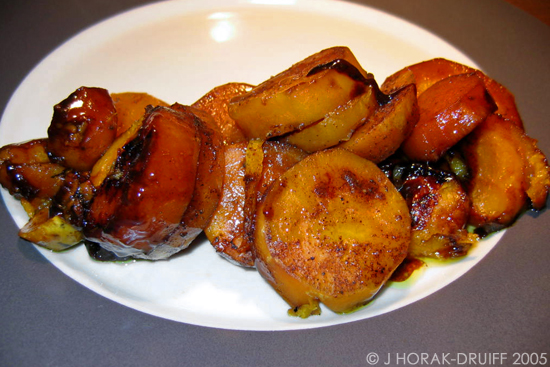 Well, it’s that time of the month again – time for Is My Blog Burning, the foundation stone on which all other food blog events were built and the event which spurred me on to start this blog.  This month’s incarnation of Alberto’s brainchild is hosted by Foodgoat and, in a radical departure from previous themes which centred on types of ingredients or types of dishes, he |(or is it Ladygoat’s idea?) has chosen a colour theme!  When I first saw the theme announcement, I thought it referred to the fruit, but no – it was the colour orange that they were after!  (Trivia:  recent press reports would have us believe that Billy-Bob Thornton only eats orange food.  Any connection, Foodgoat?? :o))

Anyhow.  Back to the real world.  So the search was on for orange food.  Like Billy-Bob I also like orange food, so maybe honeydew melons were the answer?  Nope, out of season.  How about butternut squash?  Yup, can be done, but I’ve already posted on butternut soup and butternut risotto.  Maybe butternut gnocchi?  Or there are always carrots, but I couldn’t think of a single thing I felt inspired to make with carrots, let alone anything with a South African flavour.  Then I remembered sweet potatoes! They’re orange (or so I recalled – don’t eat them much here in the UK, plus Nick is not too keen on them) and there is a traditional Afrikaans dish called soetpatats that my father always talks nostalgically about.  So, decision made, I set off to buy me some sweet potatoes and to comb the net for recipes.

While I was looking for a recipe for traditional soetpatats, I came across a great site called LitNet – a wonderful forum for all sorts of excellent South African writing – check it out.  Anyway, there is a new column on there by Michael Olivier and he writes about a recently translated book written in the 1940s by a well-known Afrikaans author – “Leipoldt’s Food and Wine”.  (Incidentally, he compares Leipoldt’s writing to Elizabeth David, who I am reading at the moment – she is a total delight!!  If you haven’t yet, just read her!)

Now I have always known of C Louis Leipoldt (1880 – 1947) as one of South Africa’s foremost Afrikaans poets.  But it turns out Leipoldt was a whole lot more than that – a truly remarkable Renaissance man with many more talents than I first thought.  Born in Worcester in the Cape Province, he went on to become a journalist, major Afrikaans poet, author, botanist, and physician, but was also a culinary expert. Apparently his interest in this last field of expertise was sparked when he was studying medicine at Guys Hospital in London and needed to take a part-time job to pay the rent.  The job he took was washing up in the kitchens at the Savoy Hotel, and there Leipoldt got to be on friendly terms with none other than Escoffier, who encouraged him to take a diploma in international cuisine.  This led to a lifelong love affair with food and in his lifetime. Leipoldt built up a comprehensive collection of books on all aspects of cookery, diet and wine, which he later presented to the South African Library. Leipoldt’s works on food and wine were written in Afrikaans in the 1940s and published posthumously.  “Leipoldt’s Food and Wine” is their first translation into English and consists of three sections originally written as three separate books:  “Leipoldt’s Cape Cookery”, “Culinary Treatures” and “Three Hundred Years of Cape Wine”.  According to all accounts, it is not just a source of traditional recipes but also an engrossing social and historical record of life in South Africa, all written in Leipoldt’s inimitable style and with infectious enthusiasm.  I know that it will certainly be gracing my (burgeoning) bookshelf soon.

From Michael Olivier’s piece on Leipoldt and his book, there is this delightful excerpt:

“In his charmingly written recipe for stewed sweet potatoes, the dear man recommends a large lump of sheep’s tail fat, not that you’d find that now. But his description, that they “should be translucent, golden with a slightly brownish tinge [topaz in fact] and exquisitely tender”, makes me almost taste them.”

In keeping with the realities of what you find in modern supermarkets, Michael kindly provides a recipe for soetpatats sans  lump of sheep’s tail fat, and it is this recipe that I use and that I have copied below.

I must say I was hugely relieved when I sliced into the first sweet potato and found it to be decidedly orange – I know that they come in a range of colours and was desperately worried that mine would be an insipid off-white… but just look at their delightful orange shade before they were cooked!  (The more observant readers will also notice my newest and most dearly beloved piece of cookware in the picture…  Answers on a postcard, please!)  45 minutes later the house was filled with the most mouthwatering smell imaginable – spicy, citrussy and oh so warm and delicious.  Whipped them out of the oven and back onto the stove to boil down the liquid – and that’s where my only word of warning comes in.  Watch the pot carefully, especially if you used dark muscovado sugar like I did – sugar burns very quickly once the water has boiled off!!  Luckily, this is just a warning, not a subtle way of admitting that I destroyed my casserole (although I did come within a millimetre of extreme pain when I developed Tourettes of the brain and tried to pick up the cassserole with my bare hands to reposition it on the stove, directly after it had come out of the oven!! Another disaster narrowly averted…) But I digress.  I served the patats with gammon steaks (will follow in a separate post) and it was a very happy marriage.  The sweet potatoes were tender but not crumbling and falling apart, and they were absolutely perfectly glazed.  The spice was not overpowering but added a delicious complexity and the hint of citrus from the orange peel cut through the sweetness.  Together with the salty gammon steaks, they were perfect.  I was in IMBB heaven.

Maybe Billy-Bob is onto something. Preheat the oven to 180C.  Mix the sugar and spices together. In an ovenproof casserole, layer sweet potato slices with the sugar mix.  Top each layer with blocks of butter, strip(s) of orange peel, salt and pepper.  Finish with a layer of sugar and butter.  Pour the water down the side of the casserole and bring to the boil on the stove.  Once it is boiling, cover and cook in the oven for about 45 minutes or until tender.  Return the casserole uncovered to the stove and boil away the liquid until the butter/sugar syrup forms a glaze on the sweet potatoes.  Remove from heat and serve.