You are here: Home / Recipes / Nero d’Avola-Merlot and duck a l’orange – WBW#8 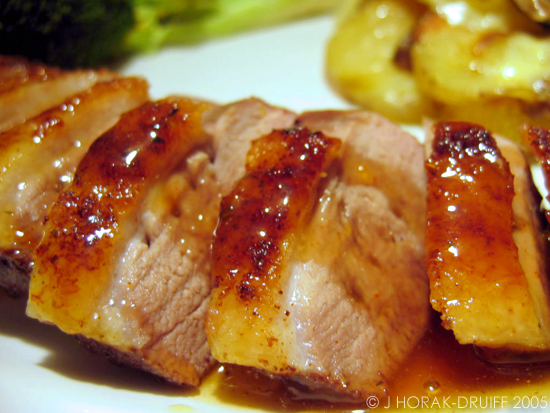 Contrary to the impression created by my singular lack of posts lately, I have neither fled the country, nor been run over by a red double-decker bus, nor eaten an exotic but poisonous mushroom/shellfish/miscellaneous titbit. What could the reason be for my silence then? Well, not much apart from Real Life intruding on blogging time (eating food, shopping for food, cooking food, having a birthday and going to a wonderful restaurant in Berlin, to name but a few) and the undeniable fact that I suck at time management!! But despite my woeful, post-deficient month so far, I couldn’t miss out on Wine Blogging Wednesday, brainchild of Lenn Thomson over at Lenndevours, could I?? The theme this month was Sicilian reds picked, unsurprisingly, by Ronald at LoveSicily.

If I have had Sicilian red before, I certainly don’t remember it. In fact, the only time I may have had some was at an Italian wine testing organised by the Italian club in my home town about 4 years ago. But clearly it didn’t make a huge impression as I can neither remember it, nor have I ever sought Sicilian wines out again. The fact that Sicilian wines have such a low profile in general is strange when you think how long they have been around. Although the Greeks are usually credited with the introduction of viticulture in Sicily around 600 BC (bringing several grape varieties with them during their extensive colonization), the Phoenicians, too, probably raised grapes in parts of Sicily, especially near flat coastal areas. There is also evidence that the Elymians (or Elimi or Elami), western Sicily’s native people, raised indigenous grapes and made a form of wine. Also, Italy’s largest contiguous grape-growing region lies in the far west of Sicily, straddling the low but rugged Gibellina Mountains in what is still sometimes called the “Mazara Valley.” It is a vast viticultural area larger than those of Piedmont, Veneto or Tuscany. And yet, apart from the sweet, strong Marsala wine for which Sicily became known, her wines go largely unnoticed. But apparently more modern techniques in viticulture and winemaking, coupled with the unique blending of local Sicilian grape varieties and international ones, has spawned a new industry – some have called it a renaissance in the Sicilian wine industry.

So when I wandered up the wine aisle looking for the Italian section, I had no idea how easy or hard it would be to find a bottle of Sicilian red – simply because I had never looked before!! As it turns out, there were about 4 or do reds to choose from but as usual, I was in a hurry and ended up choosing before doing my homework (like I said, I just suck at being organised!) and chose on price more than anything else – got something midway between their cheapest and most expensive. One day I’m going to learn to go to OddBins or similar for WBW purchases… Ahem.

The bottle I chose was a blend of Nero d’Avola and Merlot, so it could have been eligible for last month’s WBW as well 😉 I’d never encountered Nero D’Avola before, but after some post-purchase reading I discovered a bit more about the variety. For a start, it is also called Calabrese and it is one of the most common grape varieties in Sicily, first grown in the province of Siracusa, and the name literally translates as “black [grape] of Avola”. It is normally blended with other varieties to produce excellent wines like the Cerasuolo di Vittoria and some Marsala wines, but it is also a renowned stand-alone varietal. It apparently makes deeply coloured, age-worthy wines that are full-bodied and moderate in tannin, with heady flavours of ripe fruit and herbs. Nero d’Avola is often compared to Syrah in terms of body and taste and is sometimes blended with other reds (like cabernet sauvignon or merlot) but more usually bottled as a single varietal. However, as is so often the case, a number of wineries have introduced Nero d’Avola to cash in on a profitable trend. To avoid an overpowering taste, the flavour of this wine is best when the grapes are placed in cooled vats at harvest –preferably at night– to prevent conditions which can lead to premature fermentation. This technique, however, is employed by very few wineries, and consequently there are some overpoweringly harsh examples out there. You can probably see where this is heading… 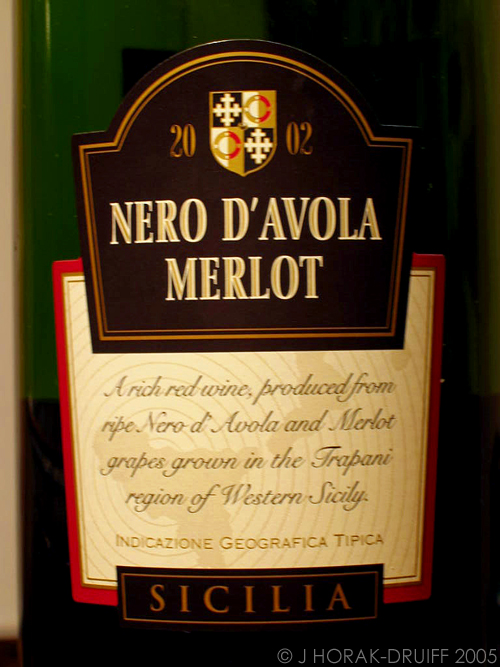 So on Tuesday night I planned and made a special dinner to match the wine and, sadly, the dinner far outshone the wine (which is probably the Universe’s way of telling me to spend more time blogging about food and less time tracking down obscure wines!!). So let’s talk about the dinner first: roast duck breasts with an orange sauce and a creamy mushroom potato bake. Duck never ceases to amaze me – it is really a lot easier than I always imagine!! Duck breasts rinsed, dried and plonked in an oven-proof dish; skin pricked all over with a sharp knife and rubbed with salt; and put uncovered in a 200C oven for about 30 minutes (grill on for the final 5 minutes). The orange sauce was kind of cobbled together from half-remembered recipes and the potato bake used up ageing potatoes, mushrooms, cream and cheese (together with some slightly younger onions and garlic and a crumbled vegetable stock cube).

Forty minutes later (I cheated and par cooked the potato bake in the microwave!) we were sitting down to dinner with our SPECTACULAR duck breasts & orange sauce & potato bake and our bottle of Nero d’Avola, which had been breathing for about 30 mins by then. A quick look at the label told me… not a great deal. Yes, it was a Nero d’Avola-Merlot blend, from Sicily (Indicazione Geographica Tipica or IGT as opposed to DOC, although this is seldom an indication of quality – or lack thereof). Yes, it contained 13.5% alcohol per volume. Yes, it was a 2002 vintage. But that’s where the useful info stopped. NO indication of how much of each varietal was used in the blend. NO indication of where in Sicily it came from, although I guess we can safely assume that it is not from a single estate, otherwise this would have been emblazoned on the label. NO indication of barrel ageing. And the information that was there was a dead end. The bottler MGM Mode del Vino is a large conglomerate bottling wines from all over the world, and I could find no mention of this particular wine on any website mentioning them. The UK Distributor, Western Wines Ltd. also choose not to mention this wine on their site. So in short, that’s about all I can tell you by way of background info! Apart from the fact that this bottle came from Tesco and cost in the region of £5-6. And of course my tasting notes:

Palate: The label promised “soft with hints of chocolate”. Hah. Big, upfront wine with lots of alcohol, but its first impression of slightly bitter cherries just grows into an annoying bitterness. Not tannic (the tannins were quite soft) – just harsh, acidic and green. Some peppery spiciness, but the overwhelming impression on the finish was lack of fruit, lots of alcohol, and bitterness. Drinking it with food helped to take the edge off a little, but not much. There were about two glasses left in the bottle by the end of the night (we soldiered manfully on…!) and I left that with the cap half unscrewed overnight, and by dinner the next night it had softened considerably, but was still lacking in fruit in my opinion. On that last point, I had thought that a 3-year-old wine would have softened a lot more than this one did, but thinking about it now, I wonder whether the screw-cap didn’t have something to do with its unexpected harshness. Possibly what this wine needed was some more contact with oxygen, which a natural cork may have provided? Guess we’ll never know…

Will I ever buy this wine again? Not bloody likely!! Will I try other Sicilian Nero d’Avolas? Definitely. But this time I’ll go to a wine merchant and ask for some expert advice. Or just do my homework before purchase rather than after!

Anyhow, for those of you who are interested, below is my recipe for duck breast in orange sauce.

¼ cup orange liqueur like Cointreau or Drambuie (I substituted bourbon this time, which worked just fine!)

Pre-heat the oven to 200C. Rinse the duck breasts and pat dry.

Place the duck breasts in an oven-proof dish skin side up, rub generously with salt and prick the skin all over with a sharp knife. Bake uncovered for 30 minutes (grill on high for final 5 minutes to crisp the skin).

For the sauce., mix the sugars and the cornstarch together in a saucepan – use a larger one than the ingredients indicate as the sauce bubbles up. Add the rest of the ingredients and stir till the sugar is dissolved. Allow the mixture to boil and thicken for 4-5 minutes and pour over the duck.