You are here: Home / Events / EoMEoTE / Fry, the beloved country – for EoMEoTE#5 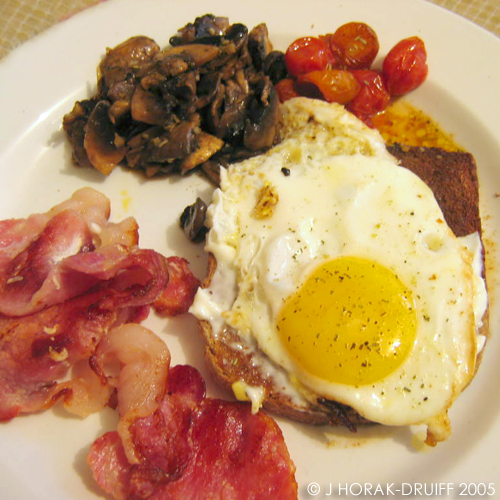 Some mornings, you wake up and decide that today, your body is a temple.  You will have raw bran and soya milk for breakfast, sip herbal tea and munch an organic apple afterwards. Some mornings, you wake up and only pure indulgence is good enough.  You will hit a sugar high with flaky pains aux chocolat, maybe some Nutella on the side and a small but perfect cup of mocha.

And then there are the mornings when only a fry-up will do.  They are usually cold mornings (who ever wanted a fry-up before heading for the beach in a bikini??) and in our house they are usually instigated by Nick.  I’ve usually had a lie-in and would be perfectly happy with a good cup of coffee and a croissant with honey.  But Nick has usually been out rowing since 08h00 and comes home cold, tired and absolutely ravenous.  No siree, no girlie-man French pastry for him – it’s gotta be a fry-up!  And since he’s the instigator, he’s usually also principal chef.

Thus it came to pass that Nick came home ravenous and decreed a fry-up, so he got to work on the eggs, bacon and toast while I was left to do the healthy stuff – the vegetables!  First I did the mushrooms – any mushrooms will do.  I usually use closed cup (button) mushrooms but chopped black mushrooms would be great too.  Sautée with a generous dollop of crushed garlic in olive oil, till just soft, sprinkle with sea salt and rosemary, then add a splash of Worcestershire and soy sauce.  Mmmmm!

But for me, the stars of this breakfast were the tomatoes.  I had bought some cherry tomatoes to use in a salad and had about half left over so I decided to add them to the mix – here’s how.  I preheated the oven to 200C and put about 2 dozen of the little guys in a small square oven-proof dish in a single layer.  Next I added a big glug of olive oil and tossed them around a little so they were properly coated.  Then I added probably about 2 tablespoons of good balsamic vinegar, a sprinkle of rosemary and sea salt and them popped them in the oven.  It took about 10-15 mins for their skins to start shrivelling and for their round shapes to start going a bit squishy – check out the cute picture. That’s when I whipped them out, but you could leave them longer and let them dissolve into mush if you wanted a tomato compote…  Now there’s an idea! 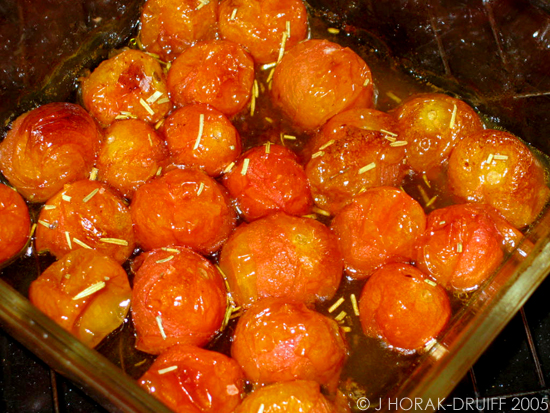 Anyway, back to reality.  Assembly was a hurried affair – my one complaint about cooked breakfasts is the difficulty in getting everything ready at once so that the crisp stuff remains crisp, the soft stuff doesn’t dry out and everything is still warm enough not to congeal.  This is why my and Nick’s double-act in the kitchen works so well for these breakfasts (at any other time, our double act resembles the run-up to a family murder more than a collaborative process…!).  And how did it taste?  Yummy!  Eggs were good and runny, bacon was suitably crisp at the edges and the mushrooms had enough juice to mop up with the bread.  But as I said, the stars of the show were the tomatoes.  Oven-roasting them brings out a taste that is entirely absent when they are raw – these tasted like squishy sunblush tomatoes with the lovely complementary flavour of rosemary and a touch of sweetness from the balsamic vinegar.  They worked particularly well as a foil for the salty bacon – I can imagine a bacon and roast cherry tomato pasta sauce in the future!!

And that, my chickens, wraps it up for this month’s contribution to EoMEoTE, the most relaxed event in the food blogosphere.  If you haven’t done so yet, trot down to the supermarket and collect some eggs, slice some bread/brioche/croissant/challa/muffins/scones/any-other-baked-goods and create your own End of Month Egg on Toast Extravaganza.  The rules are really simple – you must use egg and you must use toast. The rest is up to you.  Then you post your creation and send a link to our lovely host for the month, Johanna over at The Passionate Cook, who’ll be doing a roundup of contributions this weekend.  Anyone can play – food blogger or not – and even if you don’t have a blog, e-mail her your contribution and she’ll put it up on her blog.

So until next month, I leave you with these wise words from author Melvin Maddocks, which sum up the inherent simplicity and purity of EoMEoTE:

“It is beyond the imagination of the menu-maker that there are people in the world who breakfast on a single egg.”