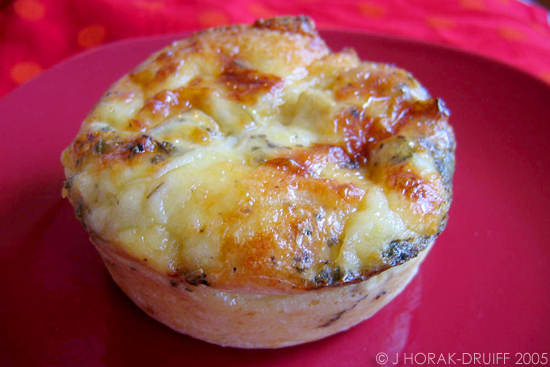 Isn’t it funny how tastes differ (or how men and women differ, depending on what lesson you choose to learn from the following anecdote!).  When I say I am making pasta and tomato sauce for dinner, I will choose a nice wholegrain pasta and boil it with quite a bit of salt.  Depending on how busy I am, I will either chop some fresh plum tomatoes or open a tin of plum tomatoes, add a teaspoon of sugar and a teaspoon of oregano and mix it well.  Then I’ll sautée some onions and garlic plus maybe some mushrooms or zucchini in olive oil, sprinkle some flour on it to help with thickening and then slowly add the tomatoes plus a dash of red wine.  On pasta with a green salad, this is a simple and delicious meal.  When my husband says he is making pasta and tomato sauce, he means he is going to boil whatever pasta he sees first, forgetting to add any salt at all!  Then he’s going to open a tin of tomatoes, squish some (raw) garlic into it, if there’s time, heat it through, and then toss it onto the pasta and eat.  And I’m not sure he sees any difference between what I’ve made and what he’s made!  (Then again, he will also eat tuna straight from the tin with a splash of Tabasco and think that’s a gourmet snack!)

This attitude also extends to the way we treat eggs.  If I say I want eggs for breakfast, I immediately start planning whether I want them scrambled, fried, boiled or poached.  Then I start wondering what I will eat with them & finally I plan how I can best photograph them looking good (of course!).  But my darling husband will, while I am still debating boil/scramble/fry toss three eggs in water, soft-boil them and eat them as fast as he can to get a shot of protein, with no accompaniment (except the ubiquitous Tabasco!).  So you can imagine how it mystifies him when once a month I spend a few days looking for interesting eggy recipes – to his mind, you already know how to cook them into an edible state, so why mess with a winning formula??  Vive la difference, I guess…  (either that or they eat a lot of soft-boiled eggs on Mars… ;-))

Anyway, this week during my eggy research I came across a cool site which is basically a portal to hundreds of bed and breakfast establishments across the United States.  But the coolest thing on the site is the fact that these establishments have also submitted their signature recipes for inclusion on the site. And since these are recipes that these establishments have tried and tested and are proud to associate their name with, I suspect that, barring Acts of God, most of them will work out OK.  After extensive scanning of the site in the “breakfast/brunch” category I came up with “Featherbed Eggs“, a recipe submitted by the Highland Lake Inn in New Hampshire.  I made a few adjustments, starting with the fact that I halved the quantities to make only 3 ramekins – here’s their original plus my notes:

(and I added some diced button mushrooms)

Butter or use non-stick spray on 6 small ramekins. Butter one side of bread, and place a single slice with buttered side up in each ramekin.

Generously pepper each slice of bread and spread with some mustard.  (At this point I went the optional extra route and put some diced button mushrooms on the bread.) Sprinkle with 1/4 cup of cheese.

Beat the milk and eggs together and add oregano to taste. Pour the mixture over the cheese and bread in the ramekins. Cover and refrigerate overnight.

In the morning uncover and place the ramekins on a baking sheet in a cold oven. Set to 350F/180C and bake for 30-40 minutes or until puffed and golden brown. Remove from ramekin and serve immediately (and I mean IMMEDIATELY – these babies start to fall as soon as the first blast of room-temperature air hits them!).

OK, so either my ramekins were really small or my eggs were really big.  Or the bread was too bulky. Either way, getting the egg mix to stay in the ramekin proved to be a problem – there was too much of it and it kept wanting to spill over the sides, so I had to pour a little, leave it to be soaked up by the bread, come back, repeat etc etc etc.  A bit tedious but not too bad.  In the morning, despite my efforts at containment, some of the egg mix had escaped the clingwrap in the night and oozed all over my spring onions.  Yech.  But we persevered and stuck them in the oven and waited.  Promising smells were followed by a nervous peek into the oven after 30 minutes…  Oh my word!!  They were puffy!  They were golden!!  They were mini souffles!!  Good thing nobody told me I would be approximating souffles as the performance anxiety alone would have killed me!!  Anyway, they looked about right (in retrospect I might have left them a few minutes longer) so I whipped them out and as I said, they immediately lose their puffy tops, but that’s OK because you somehow have to get them out of the ramekins & that does kinda involve standing them on their heads for even the briefest of seconds…

So how did they taste?  In a word – fabulous!  The bread takes on the consistency of bread & butter pudding, but a savoury version, and the mature cheddar and mustard give it a delicious zing.  The the whole thing is a lot lighter than I had imagined and I could probably have struggled through two 😉  Although I added mushrooms, you could also have added bacon bits to do a completely deconstructed version of the full English breakfast.  Maybe next time.  And if you served this on a bed of salad greens, it would make a lovely light lunch.

So that’s my latest adventure in egg-on-toast land.  Maybe I cheated a little as the bread wasn’t really toasted.  But hey, it was bread.  It was topped with egg.  And this is EoMEoTE, and anything goes. 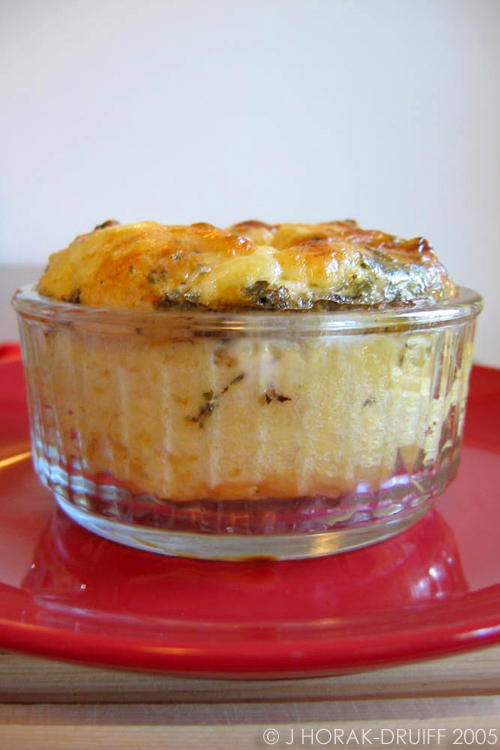