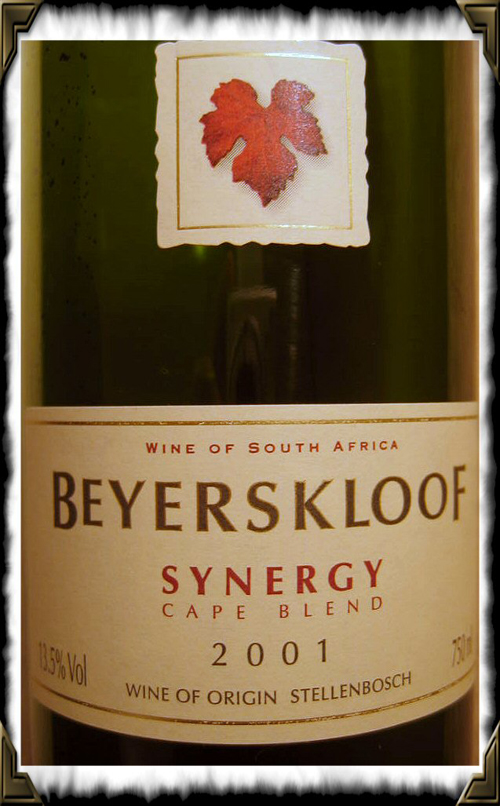 When I chose this month’s theme for WBW there was never really much doubt as to whether I would have a South African theme – I mean, hello, I’m South African and as far as I’m aware, the only South African blogger taking part in WBW.  So if I’m not going to suggest SA wines, who will??  Yes, I have had some good-natured digs about how unsurprising my choice is, and yesterday I found myself launching into a long defence of South African wines on another blog after somebody had dismissed everything we produce as “industrial swill” (!!!).  This crystallised for me the reason why (apart from a sense of patriotic pride and a homesick longing for the familiar!) I had chosen SA reds – because there are an awful lot of misconceptions out there about our wines, often propagated by people with no experience other than a couple of cheap bottles of SA plonk off their local supermarket shelves.

A lot of people see stuff like Kumala in the UK as “good” South African wine – I mean, with a slogan like “South Africa’s best-selling wine”, who can blame them? But Kumala should be obliged to add a rider to that slogan – “SA’s best selling wine if you only take into account sales outside South Africa“!!  Nobody that I know drinks Kumala in South Africa – in fact, I’m not even sure it’s available in South Africa!  It is the Coca-Cola of South African wines and in no way representative of what the country can (and does) produce.  And yet it is probably the most experience many people over here have had of SA wines!  Many of the smaller and more innovative wineries simply do not have the marketing budget nor the production volume to attempt to push their product into foreign markets and consequently you never see top SA wines on most supermarket shelves in the UK – or anywhere else, I guess.

If you are lucky, you may find a better selection from, say, Waitrose, OddBins or independent wine merchants, but these are likely to be relatively expensive.  Think about the costs of getting a bottle of Pinot Noir from France to London compared to the costs of getting a bottle of Bouchard Finlayson Pinot Noir from SA to London.  Do the math.  Of course the SA wine is going to be relatively expensive compared to the French wine!  And saying that SA wines are overpriced ignores these fundamental realities. Go to SA and buy wines on the spot and you will find them to be ridiculously cheap, much like buying French wines in France.  Along the same lines, I would be prepared to wager that I won’t find good American wine on the shelves of my local Sainsbury’s.  Getting the good stuff here is simply too expensive and the wines would be priced out of the market – so all we are left with are the Gallo offerings, and I wouldn’t dream of insulting the American wine industry by suggesting that they are representative of American wines!!  Anyhow, by including more detail and info that usual in my WBW#6 announcement, I hoped to pique the curiosity of people who had perhaps not had much luck with SA wines in the past or had dismissed the region as producing high-volume, low-quality wines.  I also hoped the practical tips on buying would prevent too many expensive disappointments… 😉

There was another reason for my choosing reds in particular – our own home-grown Pinotage grape (a cross between Pinot Noir and Cinsault which was called Hermitage at the time) is, of course, red!  The grape is something of an enigma as it was developed relatively recently (in the 1920s) and is grown almost exclusively in South Africa.  I also have to say that I am not a huge fan – all too often Pinotage turns out to be unattractively bitter and astringent – all barnyard and no fruit.  But in loving hands, Pinotage can be a delicious fruity wine with supple tannins and an intriguing spicy nose, and based on this, it should also make the ideal blending partner to a grape like Cabernet Sauvignon.  So I decided that this WBW would be my chance to get reacquainted with Pinotage in some form.  While doing some research for the WBW announcement and this post, I came across a debate (a storm in a tasting glass…) that has recently been raging in the SA wine world and which centres largely on Pinotage.  It seems that some producers are pushing for the creation of a new wine category in competitions (and, by extension, on restaurant wine lists and in the public’s hearts) called Cape Blends.  The idea behind this is to create something that is as instantly identifiable with South Africa as Bordeaux blends are with France.  Obviously a Bordeaux blend (Cabernet Sauvignon, Merlot & Cabernet Franc) was out of the question and it was felt that a Cabernet – Shiraz/Syrah blend is also out of the question as you could hardly call that unique, given that Australia does such a very good job at it.    So it was proposed that the blend should be defined as containing a minimum percentage of Pinotage (which would indeed make it a uniquely Cape blend) and the rest of the mix could be left to the creativity of the winemaker.  Sounds OK, no?

Well, apparently not to everyone.  It appears that the major proponents of the Cape Blend idea are approaching it from a marketing angle – we need to carve out some sort of unique SA brand identity in the international world market.  But detractors point out (quite legitimately) that this is putting the cart before the horse – surely if you produce a product that people like the branding will grow out of that? If loads of wine-makers are producing great blends using Pinotage, then by all means, call them something unique.  But starting out with a formula and then expecting winemakers to build a great brand out of that is a bit of an odd way to go about things.  Another big bone of contention is the percentages – just how much Pinotage will a wine need in order to qualify to be a Cape Blend?  30%?  10%?  5%??  Still others disagree with the nebulousness of the criteria – just saying that a wine must have 30% Pinotage is not enough – surely there must be other guidelines?  What if a winemaker adds 70% Chenin Blanc or something equally bizarre?  And so the debate rages on.   Whatever you call them, though, Pinotge blends do seem to be winning accolades abroad – last year the South African Kaapzicht Steytler Vision 2001 became the first Cape Blend to win Best Red Blend at the prestigious International Wine and Spirit Competition (IWSC) in London – so we must be doing something right!

One of SA’s greatest champions of Pinotage is Beyers Truter, formerly the winemaker at the highly respected and successful Kanonkop estate but now making wines at his own Beyerskloof estate.  Among his many successes he counts winning the IWSC Robert Mondavi trophy for International Winemaker of the Year (1991) and being the only person to win the IWCS trophy for best blended red twice (1994 and 1999).  He is also just happens to be the founder of the Pinotage Association which aims to improve the growing, makiong and marketing of Pinotage grapes and wines.  The Beyerskloof site even includes a couple of recipe ideas for cooking with Pinotage, including an intriguing fish dish with Pinotage sauce – this man is clearly passionate! So I figured that I could do worse than placing myself in his hands when buying a Pinotage.

I’m afraid that time didn’t permit much of a trawl through independent wine merchants – it was more like a dash through the supermarkets…  And I had a vague idea of picking up a Beyerskloof Pinotage as I know I’ve seen them on the shelves around here.  But I was thrilled to find a bottle of 2001 Beyerskloof Synergy 2001 – the first (and possibly only) wine to be labelled as a Cape Blend.  Not only did it dovetail nicely with my ramblings above about Cape Blends, plus it was a Beyers Truter, but it was also a 2001 and probably just mellowed enough to be drinking well about now. Bonus!  Food pairing didn’t really go according to plan – I was making chicken fajitas on Sunday night and had left Nick alone in the lounge.  Next thing, in he walks with the already-opened bottle of Synergy and announces that this is what we’re having tonight.  Erm, OK then!  The pairing didn’t actually work too badly as the fajitas were quite spicy and needed a wine that could stand up to them, but I would still rather have had some red meat with this one.

On to my notes.  The 2001 Beyerskloof Synergy (about £6.49 from supermarkets) is a blend of 39% Merlot, 36% Pinotage and 25% Cabernet Sauvignon and it’s alcohol content is 13,5%.  Its region of origin is Stellenbosch.  The colour is a deep ruby red, tending towards a cherry red at the edges – very attractive!  The nose was an intriguing mix of spice and tobacco, with plummy, blackberry-ish notes.  It definitely smelt like something you would want to get better acquainted with.  On the palate it showed the benefits of a few years in the bottle.  No one cultivar’s characteristics dominated and the tannins were mellow and supple, but still present enough to give the wine structure.  My first impression was of cinnamon and clove spices which swelled into tart plum and cherry fruits and then mellowed into a liquorice finish.  I would say the wine was medium-full bodied and the finish was extremely long.  Nick and I always say that if you were to represent a wine’s taste graphically, it should look like a bell curve – it should start off modestly, then swell to its full potential and then decline very slowly into a lingering finish.  Well, this is one of the few wines we have tasted recently that had that bell curve thing going on – highly recommended.  I would say that this is probably the best use that Pinotage an be put to.  Its soft tannins take the edge off the tannic Cabernet, while the Merlot’s soft fruitiness takes the edge off the Pinotage’s bitterness – the whole is definitely more than the sum of its parts.  Synergy indeed.