You are here: Home / Recipes / A Valentine’s cherry millefeuille for Sugar High Friday 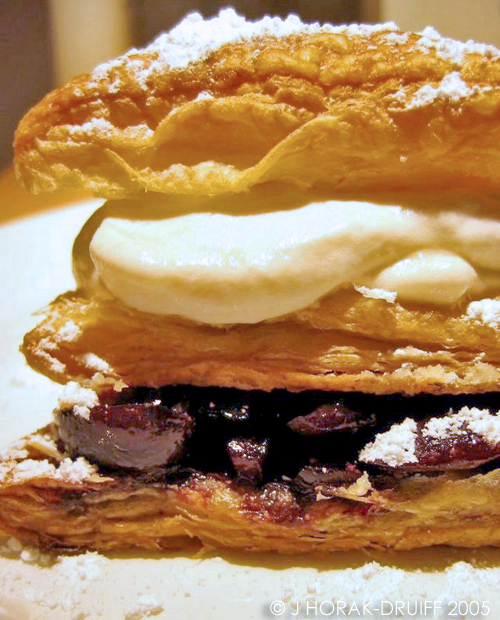 What was that I was saying in my previous post about procrastination?  Here at Cooksister I’ve managed to turn Sugar High Friday into Sugar High Weekend…  But this time there was a reason. No really.  You see, Nick’s been away in Spain for a week on a rowing camp and he took the digital camera with him – so although I could have made something on Friday, I could not have posted pics which would have spoiled the whole post for me.  And also, where’s the fun in making a flashy dessert with no audience??  So in the end I decided to wait for his return yesterday morning and do a SHF contribution a day late.  So for a change it’s not just rampant procrastination on my part – there was a teensy bit of method to my madness.

As this is the first Sugar High Friday event I’ve belatedly participated in, here’s a bit of background.  In the grand tradition of Is my Blog Burning? and Wine Blogging Wednesday (and of course our very own End of Month Egg on Toast Extravaganza!), SHF was originally proposed by Jennifer at the Domestic Goddess as a monthly celebration of all things sweet.  Each month a theme is chosen and food bloggers around the globe create a sweet dish using this theme and post their collective dessert trolley on their blogs, often with super-delectable pictures.  This month’s theme of “Hundreds and hundreds of layers – puff pastry” was chosen by Clement at A La Cuisine and for the first time I was tempted to participate.  As those of you who read this blog regularly will know, I don’t often post dessert recipes – I am far more likely to take time and trouble over a starter or a main course and serve some slices of mango with mascarpone for dessert.  But something about puff pastry seized my imagination and I started giving some thought to what I might make.  I also have to say that pastry and I are not very well acquainted – in fact he thought of making a pastry mostly makes me hyperventilate break out in a cold sweat.  I’m just more of a pastry hick than a pastry chick.  And having read up on the correct way to make puff pastry it became apparent pretty early on in the planning process that I would be buying ready-made pastry rather than making my own!!

Anyhow, I toyed with various recipes I found on the Net – a chocolate nut strudel, a tarte tatin, a chocolate and banana mille-feuille but nothing leaped out at me.  Also, I knew I would be making my dessert for just 2 people and neither of us has a very sweet tooth, so a large volume would just go to waste.  In the end it came down to leaving work on Friday evening and walking through Tesco to see what took my fancy.  Found the frozen puff pastry & then something in the fruit and veg aisle caught my eye – cherries!  Some of the first of the coming summer season and, along with crocuses and daffodils, a sign for me that the despised winter will eventually come to an end.  Cherries have always been some of my favourite indulgences – there’s something so decadent about popping the whole thing in your mouth and yanking the stalk off before biting into its bittersweet, blood-red flesh.  I remember years ago on a family holiday my mom and I went to do the day’s food shopping in the village and came across some hideously expensive imported cherries.  Totally irresistible.  We bought a little bagful – no more than 20 or so – and set off on the drive home.  It took about 20 seconds for us to have a brief debate as to how much other family members really liked cherries,  how we would be the only ones to appreciate them and whether we could finish the whole bag in the time it took us to drive home.   Suffice to say that by the time we got home the only incriminating evidence was a small bag of pips sucked clean and traces of cherry juice staining our guilty but replete lips.  Sorry dad, sorry bro!!

Ingredients finalised and purchased, I set off home to refine my vague recipe ideas.  In the end, in deference to the approaching festival of all things romantic on Monday, and as a little early celebration upon Nick’s return, I decided that some variation of mille-feuille incorporating cherries, cream and hearts was appropriate. 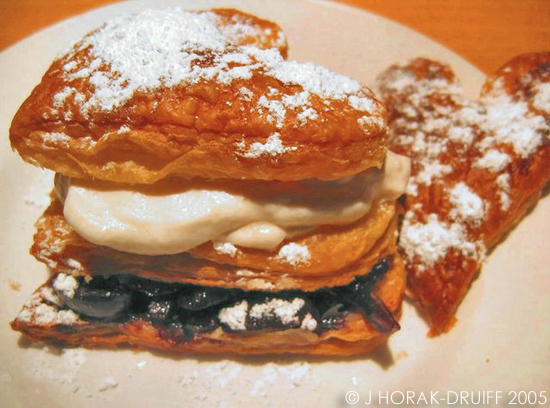 Preheat the oven to 220C and spray a baking sheet with non-stick spray.

In a small saucepan dissolve the sugar in the water and cherry liqueur.  As it heats up, stir in the butter so that it melts.  Allow to come to the boil and leave to boil for about 5-10 minutes.  Take off the heat, add the cherries and return to the heat for a couple of minutes to allow the cherries to soften.  Set aside and keep warm.

Take your square of puff pastry – I actually rolled mine a little thinner as I didn’t want HUGE puffs.  You can also limit the puffiness by pricking it all over with a fork before baking.  Cut out four heart shapes, trying to keep them approximately the same size and shape (tricky when you’re doing it freehand like me!).  Mine were about 10cm long and about 7cm wide.  Place the hearts on the baking sheet and pop them in the oven. (I also put my pastry offcuts in the oven in a separate dish, sprinkled with a little grated Parmesan – hmmmm, instant cheese straws!).  The package instructions said to bake for 20 minutes but mine were puffy and golden after 15, so keep an eye on them.

While the hearts are baking, whip up the cream into peaks with enough cherry liqueer that you can taste it – it also turns the cream a lovely pale lavender colour!  If using kirsch, you may also want to add a bit of sugar.

When the puff pastry hearts are done, remove them from the oven and start assembling.  I had planned to use one heart as a base and the other as a top but they were sooooo puffy that I did the following:  slice each heart in half as if you were slicing bread – so that you end up with 2 flatter heart shapes.  (like I told the pastry police, look away NOW!) Put the one flat half on a serving plate and top with a generous helping of the cherries and syrup.  On top of that, place the other flat half and top that with a generous dollop of whipped cream.  On top of that, place one of the puffy hearts and sprinkly with icing sugar.  I used the other puffy half as garnish, also sprinkled with icing sugar.  Voila!

Serve immediately – the contrast of the warm, light pastry, the sweet fruitiness of the warm cherries and the decadence of the alcoholic cream is quite, quite sublime.  Even Nick, who’s not a dessert man, loved it – it was like eating sweet air!  And the hearts shapes actually looked rather lovely – even to an old cynic like me 😉 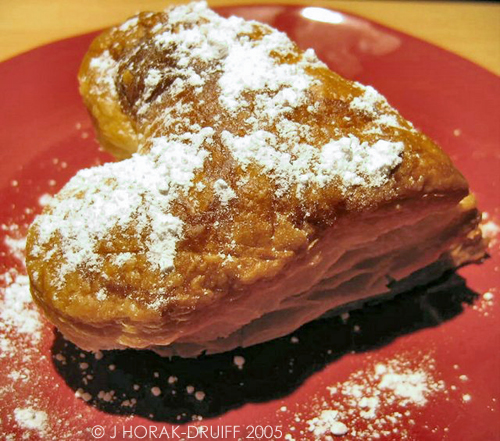