You are here: Home / Events / Is My Blog Burning? / Easy sausage & bean casserole with herb dumplings for IMBB #11 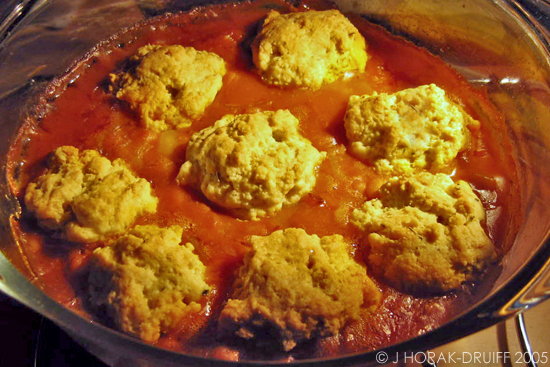 Family legends – there’s nothing to beat them.  All those catchphrases, anecdotes, made-up words and in-jokes that form the glue that bind together a group of people across the miles and across the years.  Our family seems to be a particularly rich source, possibly because we have more eccentricity per square chromosome than most (!), and quite a few of these revolve around my dad – how he signed autographs for Japanese schoolchildren on a 1969 visit, identifying himself as “Gary Player”, the famous golfer; and how he fixed a leaky roof by placing a bucket on the ceiling directly below the leak (you can imagine how that one panned out!!).  But my brother has also been the source of his fair share of family lore – and rather a lot of it has to do with food and eating.

As a toddler, my mom would read to him from a picture book full of farm animals and as she pointed out each animal, he would make the noise of the relevant animal.  So she’d point out the cow (“MOOO!”), the donkey (“HEEE-HAW!”) and the rooster (“COCK-A-DOODLE-DO!”).  When she pointed out the pig, he wouldn’t say “oink”, but would rather snort loudly through his nose in a rather good impersonation of a pig grunting (let’s just call it “SNORT SNORT!” for argument’s sake).  Anyway, at about the same time my mom was also teaching him the names of things – food, plants, cutlery, birds, you name it – whatever crossed their path in the course of the day, she would teach my brother the proper name for it.  He was with her as she was laying the table one day and was getting quite good at identifying familiar objects that she held up.  First she held up the knife.  “Mes!” he cried.  Then she held up the spoon.  “Lepel!” he cried.  Then she held up the fork.  He hesitated for a second and then said “SNORT SNORT!”.  At first my mom thought he had just made a mistake or was just fooling around until it dawned on her…  The Afrikaans word for a pig is a vark (say “fark”), while the word for a fork is a vurk (say “furk”) – he had just decided that they were clearly the same thing – I mean, what’s a vowel or two to a two-year-old??  It was too cute!  Also, bizarrely, while other kids struggled with letters like S and R, my brother had no trouble with these.  What he did have trouble with was the word for cheese – the deceptively simple kaas in Afrikaans.  Easy peasy, no?  Well, erm no.  My brother decided that he couldn’t manage that.  What he could manage to call cheese was something along the lines of “kgankg”, where the g sound corresponds roughly to the hard “ch” in German (as in nicht).  You try to say that – it’s bloody hard!!!  But to my brother it was a lot easier than kaas!

Not all his culinary anecdotes were as charming (at least, not to my mother).  None of us will forget the day when she made a rather nice kedgeree using smoked snoek – a delicacy in anybody’s book.  However, my brother was sitting at the table picking at his food with a long face.  Eventually my mom asked what was wrong.  He said he didn’t like the food.  When she asked what was wrong with it he replied without hesitation that it tasted the way he always imagined Pamper tasted.  Pamper was the brand of set-in-delicious-jelly tinned cat food that we fed our two cats.  Needles to say the meal did not end well for my brother!  And from then on smoked snoek was approached with extreme caution in my mother’s kitchen.  A more positive contribution to our culinary repertoire brought about by my brother is our tradition of making warm potato salad.  I think it started when my mom was running late with lunch one day and made potato salad minutes before serving it, so it was still warm when it arrived on the table – and my brother fell in love.  In fact, from then onwards if the potato salad had been chilled he insisted on warming it in the microwave before serving!  But the culinary contribution of my brother’s that I refer to the most often is “hot coleslaw” – nothing to do with coleslaw in fact, but a traditional Afrikaner dish of potatoes , onions and green beans mashed together – and that was the first dish that sprang to mind when I saw the IMBB theme of beans.

Let me say first off that hot coleslaw in our family has nothing to do with coleslaw.  It is in fact a dish called boereboontjies or, literally, farmer’s beans.  It is an accompaniment to stews or roasts that I remember having eaten throughout my life – my mom often made it at home and it’s one of the few vegetable dishes I have always liked.  For some reason my brother decided that this combination of green beans, onions and potatoes reminded him of coleslaw and for years now, that’s what it has been called in our house.  When I first came to London and cooked dinner for the guys who were so graciously letting us sleep on their lounge floor, I made a meal that my mother would have made – pork sausages with apple rings and hot coleslaw.  You can imagine the puzzled looks when the “coleslaw” turned out to be nothing of the sort, but it is indicative of how much this dish reminds me of home – at the height of my homesickness this is one of my favourite comfort foods.

So I thought I had a dish sorted out for IMBB#11 – but it was a side dish, which seemed to me to be a bit of a cop-out.  So I scratched around for inspiration a bit more and combed through my recipe book (the one full of written-out and stuck-in recipes collected from magazines, friends and family over the years).  There I came upon a recipe cut out of a magazine (I suspect it was an ASDA magazine – so much for pretentions of grandeur around here!!) and entitled “Sausage herb crust pie” which looked easy, warming for a cold winter’s night and featured beans as one of its major ingredients – bonus! But the “pie” which I had mutated into a casserole (see mutated recipe below) turned out to be quite extraordinary – a real poor man’s cassoulet, and pretty easy to put together.  The bean sauce had reduced a little to a thick, goopy concoction that was flavoured with the sausages and the dumplings were decadently buttery and had soaked up a lot of aforementioned goopy sauce in their lower half, while remaining crumbly and light on top.  Heaven.  I imagine you could doll it up further if you wanted with chunks of smoked pork in addition to the sausages, or make it really basic – depending on your budget and tastes.  I’ll certainly be making it again and even Nick (who is usually not very vocal about enjoying food) was raving.

Now what more can you ask for on a cold winter’s night – a new crowd-pleaser and a happy husband! 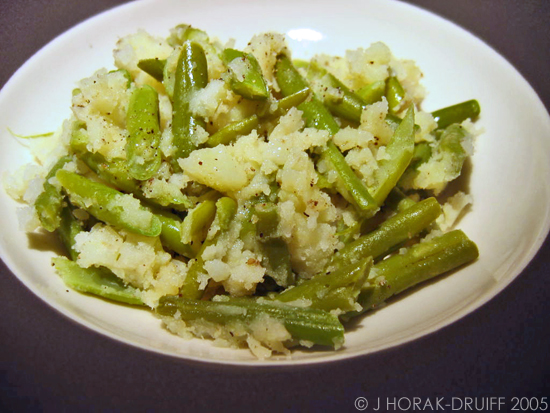 Preheat the oven to 220C.  Fry the sausages and onion in a little oil for about 5 minutes, turning at least once.  Remove from heat when sausages are browning and just cooked through, cut the sausages into chunks and return them to the pan.

Add the baked beans, the water, the Worcestershire sauce (and any other sauce you wish) to the pan.  Return to heat and until beginning to bubble.  Spoon into an oven-proof casserole dish.

Put the flour, herbs and butter (in cubes) in a bowl and rub the butter into the flour with your fingers until the mixture resembles large breadcrumbs.  Stir in the milk to make a soft dough.  Break the dough into pieces roughly the size of small apricots and dot them all over the top of the bean mix in the casserole (NOTE – it you want a pie-crust to form, make the pieces smaller and closer together so that they will fuse as they bake.  If you want separate dumplings, dot them around as described.)

Bake uncovered for 10 minutes, then reduce the heat and bake at 190C for a further 15 minutes before serving.

« Red wine, figs in chocolate for a Friday night at home
Fairview’s Goats do Roam in Villages for WBW#5 »