One of the great things about having this blog and reading other people’s blogs is that I have discovered all sorts of new and delicious foods – sometimes because I have ordered/cooked bravely with a view to having something to write about later, and sometimes because I have read about delicious-sounding stuff on other blogs and then gone off to try it.  One of the happiest discoveries this year came from reading Renee’s great blog Shiokadelicious! (she who introduced me to Tim Tams!).  On a number of occasions Renee has written, sometimes quite extensively, on steamed pork buns.  Now I grew up in a small city where exotic Asian cuisine stretched about as far as sweet ‘n sour pork, Shanghai steak and egg-fried rice.  Dim sum was something that happened to other people and bamboo steamers were things you saw in the movies.  Clearly I had not had much opportunity to try steamed pork buns!! 😉

However, after reading Renee’s mouth-watering descriptions of the buns, I was determined to try some when they next appeared on a menu.  The opportunity presented itself a couple of months ago when we helped my friend Bronwyn to move out of our flat and into a place of her own.  After offloading all her stuff, Nick, Bron and I took a walk up the local high street and Bron decided to treat us to lunch.  The place that caught my eye was Van Lang, on the High Road or Broadway between Wood Green and Turnpike Lane tube stations in London.  The restaurant is in a rather old building and has a high-ceilinged airiness about it that I liked, but the main attraction was the fact that they advertised a dim sum menu in the window!

Decision made, we went in and settled down at a table by the window to peruse the menu.  The menu kind of straddles two (or more??) Asian cuisines – on the one hand there are Chinese dishes like Szechuan chicken, hot and sour soup and the dim sum menu; while on the other hand there is a selection of Vietnamese dishes which I didn’t make a note of and can’t begin to name – sorry!!  I spotted and instantly wanted the steamed BBQ pork buns on the dim sum menu, so Bron and I ordered them along with some steamed shrimp dumplings as a starter.  The menu offered fresh juices, so I ordered an apple juice to wash mine down with. 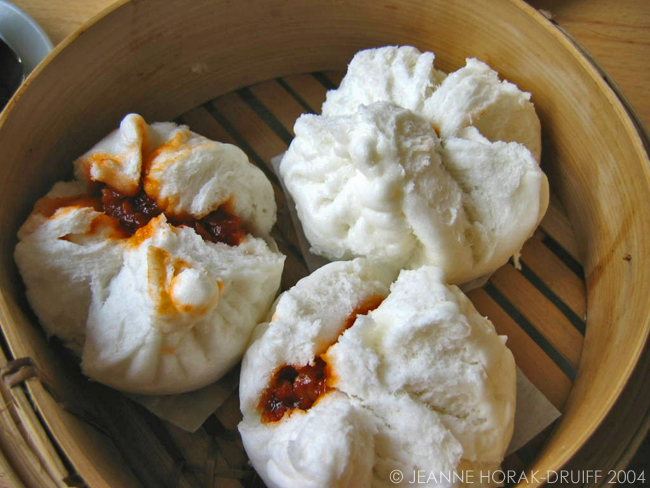 I always like restaurants that appear modest but clearly have aspirations above their station when it comes to food.  Van Lang is such a place.  The tables and chairs are cafeteria-style plywood and the menus and specials advertised in the windows are hand-lettered, but attention to detail in the edibles department is flawless! For starters, my apple juice arrived fresh from the juicer where it had clearly been juiced with its skin still on – all tart green foam and sweet juice.  This far exceeded my expectations of supermarket-bought apple juice – in fact, it’s pretty much what you would be served at Wagamamas, but at a far more reasonable price – bonus! The dim sum arrived, properly attired in little bamboo steamers, looking fab.

The dumplings had a translucent, fall-apart delicate look and were filled with a delicious shrimp and ginger mix – they proved to be quite robust enough to survive being picked up with chopsticks without falling apart too!  But my favourite was definitely the steamed pork buns.  It is hard to describe the taste – the dough is a bit like a sweetened white bread dough and is very soft and pillowy.  Then you bite into the bun and get to the delicious shredded pork in a spicy barbecue sauce which complements the sweet dough beautifully – yummy!! I am sold.  The main course was the delicious chicken Szechuan pictured above – it was spicy but with a sweetness that took the edge off the burn.  Bron’s ginger and spring onion chicken was also delicious – tender chicken and crispy slivers of ginger, hmmm.  The only disappointment of the meal was Nick’s main course, and this might have been a question of personal taste.  He ordered a Vietnamese dish (sorry – didn’t take the name down – mea culpa, mea culpa) consisting of chicken strips and stir-fried vegetables in a pungent fish sauce, and the particularly fishy nature of the sauce together with the chicken just did not appeal to him (or me, when I tasted a spoonful).  As with most restaurants, the rice had to be ordered separately, but unlike most restaurants each portion of rice cost something totally ridiculous, like 50p, and they were HUGE! We all came away feeling like little stuffed piglets, and when the bill came it worked out to be around a very modest £10 per person! 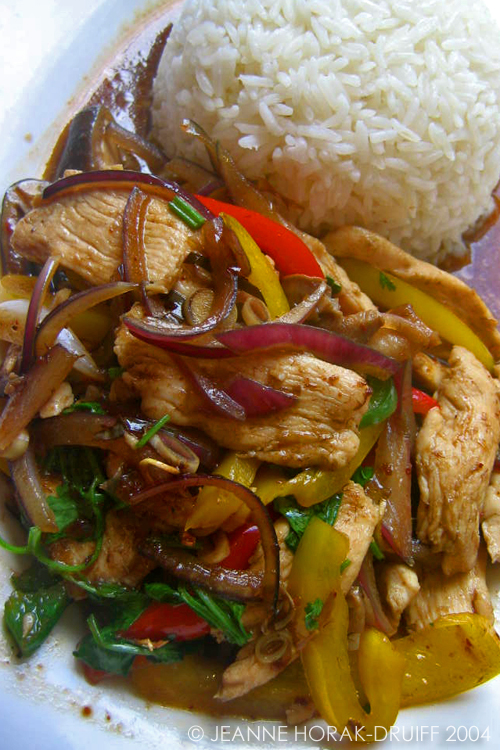 So should you find yourself in the wilds of Wood Green in the near future, do yourself a favour and drop in to Van Lang for some restorative dim sum at very reasonable prices – and indulge in a freshly pressed juice while you’re at it!

Liked: the prices, the freshly squeezed juices
Disliked:  the out-of-the-way (for me!) location