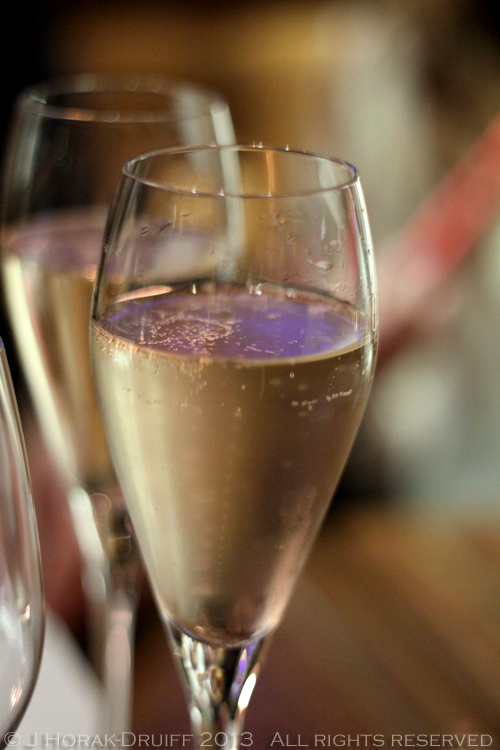 So the canapes are made, the champagne is chilling and the CDs are lined up for a Big Night tonight – yup, it’s that time-honoured anti-climax, New Year’s Eve.  Oops, am I sounding a tad jaded/cynical?  Well, it’s just that I find I’m usually balanced on a knife-edge on 31 December, and from there I can fall either into soul-crushing, weepy, nihilistic despair at the lost opportunities of the year past and my fears for the year ahead; or leap into Duracell-bunny party mode (and those of you who have checked out my Munich photo album will know how apt the analogy is!) and be in the highest spirits till dawn.  It can go either way, often for no discernible reason.  I kid you not.

I’ve always been a fan of big parties on New Year’s Eve.  When I was 16, my indulgent parents let me host a “dinner, bed and breakfast” party on our patio at home.  This involved about 16 friends dressed to kill arriving for drinks, dinner, a midnight swim and champagne, dancing, Trivial Pursuit and coffee, a trip to the beach to watch the sunrise, and a full English breakfast.  This cemented my taste for extravagant parties on 31 December!! One of the best New Year’s Eve parties I ever had was inspired (wait for it) by Wham!’s “Last Christmas” video – OK, so I’m a child of the 80’s!?! The video pictured a group of people who all went away for a snow-bound Christmas weekend in a chalet in the mountains and to a teenager living with mom and dad at home, this seemed like the epitome of festive freedom.  So at the end of 1989 I rounded up a dozen university friends from all over the country and rented a run-down bungalow almost directly on the beach in Plettenberg Bay, South Africa. New Year’s eve was a total and utter success.  We all had dinner at home, around the table, all very civilized, and then progressed to intervarsity drinking games.  At 23h30 there was a mad rush for the beach where one of the local hotels put on an annual fireworks display and then we wandered the beach, talking to people from all over South Africa, swigging champagne and generally being thrilled to be on a beautiful beach in the warm African night surrounded by friends, welcoming a new year and decade full of promise.  Sigh.

For quite a few consecutive years, a number of us (my brother, his wife and her family) celebrated New Year’s Eve together, and one of the best traditions they have is to sit down at some point after midnight (seeing as nobody is capable of standing at that stage ;-)) and making everybody write down their New Year’s resolutions in a book.  The book was then produced at the following year’s celebrations and everyone was monitored on the progress of their resolutions – often with quite hilarious results! I remember one year listening to one teenage friend of the family, whose resolutions included cutting her hair into a new style and growing her nails long.  Whoever was writing down the resolutions quipped: “That’s lovely.  And now what shall we put under ‘self-actualization’?” :-o) At the party I attended last year, everyone had to write their New Year’s resolutions down and put them in a hat.  Later, everyone had to randomly draw a resolution and read it out before attempting to stick to it all year.  Poor Nick ended up with “to visit the gynaecologist regularly”!

Of course, there have been the less-then successful New Years too.  One spent with an ex who dressed up in a hessian sack that barely hid his Y-fronts and a big wooden sword (OK, so it was a costume party, but still…) and then proceeded to get paralytically drunk by about 9pm.  This, however, didn’t stop him from walking into the sea wearing a leather belt he’d borrowed from me and which was never the same again afterwards.  It was an evening of acute embarrassment.  Shudder.  Or the planned rendezvous on a beach at midnight where I got stood up and spent the rest of the night wandering the beach, wailing and keening in despair and getting drunker and drunker (what can I say – my student days were really interesting!!). Or the turn of the millennium, spent with three people who thought it was all hype and refused on principle to make a big fuss at midnight.  Let me just say that you feel like a real loser doing a countdown, popping champagne and yelling “HAPPPPPY NEW YEEEAAAAR!” all on your own, while other people stare at you morosely for drowning out the sound of the video they are watching.

But I digress.  What I meant to say was that tonight Nick and I will be going to a friend’s house near Tower Bridge for canapes, a sit-down dinner and possibly a stroll down to the Thames at midnight to watch the fireworks. I will attempt to leave my morose tendencies at home and bring my bunny ears of happiness, even though my mind will wander to my mom, the victims of the tsunami, and the fact that my family is 10 000km far away.  On the bright side, I know that none of the guests will refuse to leap up and down and make noise at midnight, nobody will dress in a mortifyingly short hessian sack (I hope!), and I’m pretty sure Nick won’t stand me up ;-).  So all in all, I’m expecting a goodie!

I hope that everybody reading this has a wonderful New Year’s celebration tonight, surrounded by family and friends, safe, happy and loved. I hope that 2005 brings you all peace, prosperity and love.  And of course, loads of good food and wine.

In the immortal words of ABBA, which (alarmingly!) I’ve sung every year since 1979: