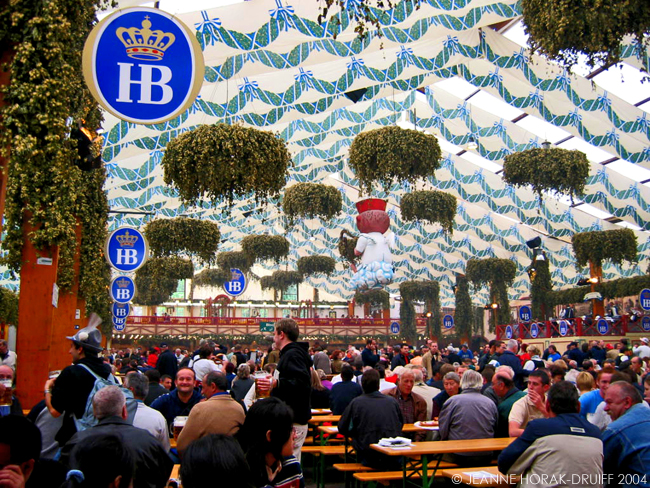 As promised, I am digging into the vaults and finding posts that should have been made weeks (if not months!) ago – and one of them is an account of our trip to the Munich Oktoberfest at the end of September.  This was our second trip – last year we were persuaded to go by a group of our Australian friends and I was very, very dubious about the whole affair.  Firstly, I don’t usually drink beer. Secondly, I am no longer 18 years old (!!) and lastly, I hate being in a crowd of seriously drunk people.  It looked like a match made in hell.  But I decided to keep an open mind and go, and despite living four to a room in a pension with only two showers per floor of about 20 people, I absolutely, unreservedly adored it!  I loved Munich, I loved the people and mostly I loved the fest itself.

After getting used to England where binge drinking is a major problem and drunken violence occurs almost nightly whenever large groups of drunk people get together, the Oktoberfest was a revelation.  I somehow wonder whether it could actually exist in anywhere else in the Western world.  I mean, it’s fantastically un-politically correct.  A festival devoted to the drinking of alcohol??  In this day and age??  Only in Europe!  And as I said, if you put a hundred thousand people together in one area and ply them with beer for 12 hours per day in England, it would be total chaos.  But somehow in Germany, although there is all this chaos and debauched drinking going on, it goes on with German formality and a curious order is somehow maintained.  Yes, you will be served beer all day (no queueing at the bar!!) – but you must first find a seat in the beer tent – no seat, no service.  Yes, we will give you these fantastic one litre steins to drink out of (not injury-proof plastic cups) – but if you try to steal one, which everybody wants to do, you can get arrested. Yes, you can drink till you pass out, but you may not stand in the aisles and block people’s way. Yes, you can dance on the chairs, but put one foot on the table and you are reprimanded by security. It could only ever work in Germany!! It’s a fascinating mix of debauchery and order…  And for all the drinking and all the drunk people I saw wandering around, I didn’t personally see any violence in the four days I visited the fest grounds (although I know there were some incidents – but far fewer than one would expect, given the magnitude of the event).  The other surprising thing was the number of Germans attending the fest.  You somehow think that the fest is going to be a bit like Hogmanay is to the Scots – a tradition hijacked by foreigners.  But the Germans attend the fest in droves – and mostly in traditional lederhosen and dirndls!  – which I thought was really great.

But enough background.  This year we once again packed our bags and headed for Munich – but we have got wise since last year and this time round we had arranged our own accommodation – no more four to a room bunk beds!  The closest station to our hotel was… Theriesenwiese – the stop for the fest – so we had an idea we’d be pretty close, but I don’t think we realised we would be less than a minute’s walk from the main gates – woo hoo!  The Hotel Bavaria was really great – a big room and en-suite bathroom in a quiet street and all the facilities you could want. After we’d dumped our stuff we took a little walk around the Wiesn (aka the Theriesenwiese) – everything was just as we remembered:  the massive beer tents, each seating thousands of people, the funfair, the concession stands packed with silly hats and gingerbread hearts… just bliss to be back!! Didn’t go into any of the tents as some of them were closed due to over-filling and others were open but you could guarantee that by mid-afternoon there would be no seats left (and remember, no seat = no service!). Instead we decided to spend the afternoon in the old town, so we took the train to Marienplatz. Got out and sort of wandered towards the Viktualienmarkt – the open-air food market in the middle of the old town and one of my favourite places in Munich. immediately got a leberkässemmel (a roll containing a slice of very fine meatloaf containing corned beef, bacon and onion, baked in a loaf tin until it has a crispy crust) with lots of sweet mustard and was a happy pup within minutes. 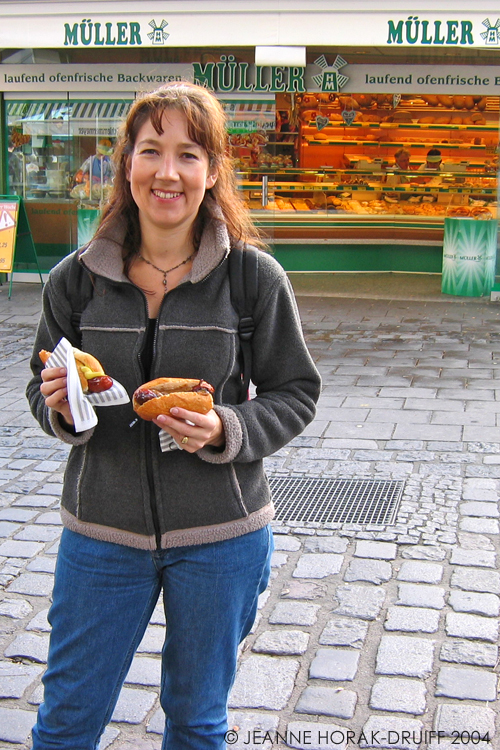 I had a käsebeisser (smoked pork sausage with chunks of cheese in it – yummy!! – in a roll with sweet mustard) and we strolled around happily munching for a while.  You can say what you like about German food – it is deeply satisfying in a “back-to-childhood” sort of way… Strolled around & took photos of all the fantastic fresh produce, including a really interesting fruit seller where I saw my first durian in the flesh (so to speak!).  They also had two things I’d never heard of – drachenfrucht (“dragon fruit”) which appears to be related to the prickly pear, and schlangenfrucht (“snake fruit” or salak), so called because of its brown scaly-looking skin.   The dragon fruit was really beautiful with white or pink flesh – move over the kiwi fruit as decorative fruit of choice!! We also checked out the wonderful cheese and meat counters – temptation around every corner!  See what I mean?? 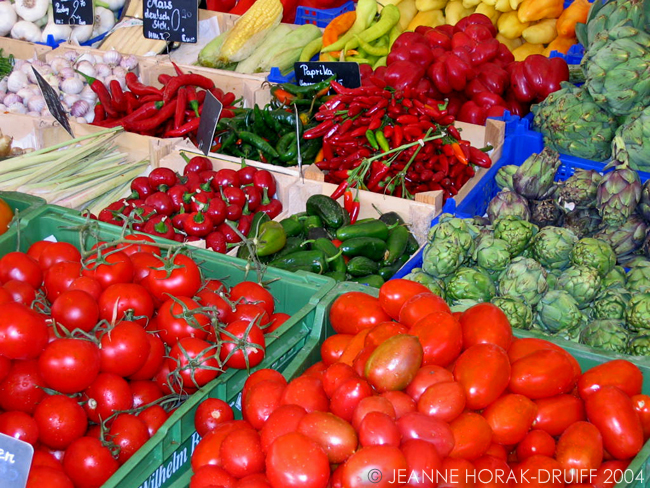 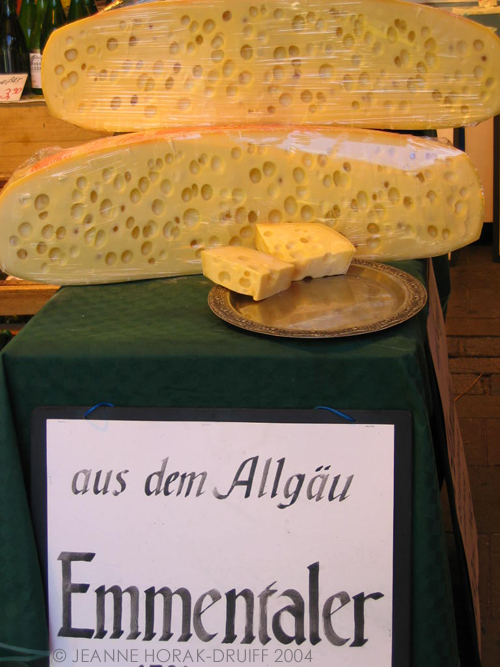 Then Nick decided we had been in town far too long without a beer, so we headed for the Hofbräuhaus for a beer – we never got in there last year as it was way too full when we arrived at 11pm. This time we could walk in without problems, but the place was PACKED and rowdy with not a table in sight. This did not sound like how we wanted to spend the afternoon – not for nothing is the place described as something of a tourist trap… So we walked around to get the feel of the place and then headed out again. Ended up across the square in the Ayinger Keller – a beautiful wood-paneled pub/beer hall with seats available and a nice atmosphere. Nick was thrilled because we could watch a fresh beer barrel being tapped – they use a big wooden mallet to hammer something into the top of the barrel to let air in so that the beer will run freely out of the tap at the bottom – very impressive! Nick had an Oktober Fest-Marzen beer, brewed specially for Oktoberfest (which he pronounced to be excellent and hopsy – he remembers this as the best beer of the visit) and I started with my first Radler (half beer and half lemonade – yes, I know, I’m a girl!!) & we spent some time people-watching. 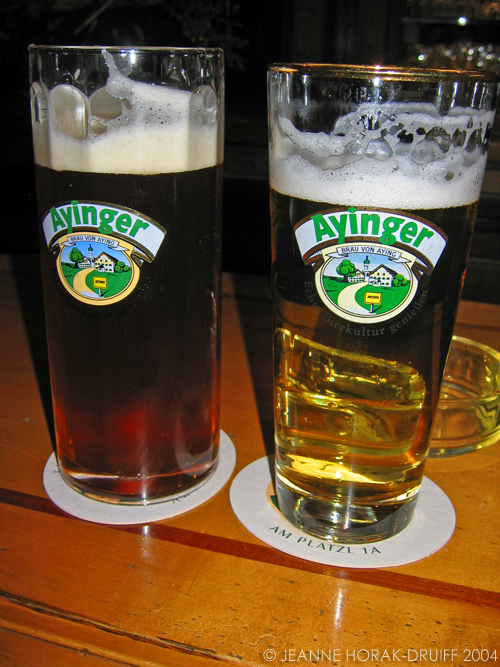 After that we headed back to the hotel for a little nap (we had been awake since 4 a.m.!!) before dinner at Lamm’s (the third restaurant in this link) at Sendlingertor. Lamm’s is open 24 hours per day and in any other country a 24-hour restaurant would be a McDonalds Drive-Thru or similar.  But Lamm’s is nothing like that – it’s a proper Bavarian restaurant that just happens to serve food all day and all night!  Last year we sat outside for dinner, under the chestnut trees among the fairy lights, but this year the weather as considerably colder, so we headed into the inconspicuous entrance and down into the labyrinthine basement dining room to find a table for two.  The place is decorated in true Bavarian style with lots of beer memorabilia and blue & white (the Bavarian colours) bunting – lots of dark wood and low lighting which makes it quite cosy.  The menu isn’t huge and definitely leans towards traditional southern German cuisine – loads of sausages of various descriptions and numerous other incarnations of pork.  It is not a particularly vegetarian menu!! I settled for goulash which had a lovely rich, spice gravy and came with a huge semmelknodel (bread dumpling) – the ultimate comfort food and Nick had kassler chops with sauerkraut, which he enjoyed.  Finished off our food and drinks at a lovely leisurely pace before heading back to the hotel for a well-deserved rest, which we would need for the following day’s more strenuous party activities!