Saturday morning, our second day in Munich, we woke up to find… rain. Hard and continuous and not part of our plan at all.  But on the bright side, we did discover that our hotel served a damn fine breakfast – in fact one of the best continental breakfasts I’ve had.  Good juice, great coffee and a nice selection of cold meats and cheeses. The bread was yummy – pumpkin seed rolls and lovely health bread, plus in addition to the sliced cheese there was a cheeseboard (!), so I was able to have some delicious chive-studded goat’s cheese with rosemary crusted ham on my bread. But the highlight for me was definitely the cereal. They had about 6 different cereals – muesli, oats, all-bran etc etc and then the one I chose: imagine a mixture of corn flakes, chocolate muesli chunks, Coco-pops and chocolate chips. On top of this I sprinkled some sunflower seeds – absolute, total heaven in a bowl. Seriously. So the day was off to a good start!! After breakfast we set off to the festival grounds into which people were STREAMING in droves, all with umbrellas and rain gear. Headed for the Löwenbräu tent to try and meet up with our Aussie friends but by the time we got there at about 10h30 and… the doors were already closed due to overcrowding!We hadn’t really bargained on the effect that the rain would have – pretty much ALL the tents were closed due to overcrowding, having lost thousands of outdoor seats because of the rain.

So we laughed the whole idea off and headed into town to do some shopping. On our walk we came across a grocery store and Nick wanted to pop in and get a snack, but of course I turned it into a voyage of culinary discovery and had a look at everything.  My favourite purchases were two adorable little bottles of flavoured oil – one is flavoured with garlic and the other with truffles, and their shapes are made to fit together – irresistible!! Most unusual discovery was finding bottles of a rather disconcerting artichoke liqueur – I mean, artichoke risotto, yes.  Artichoke liqueur… just why?? 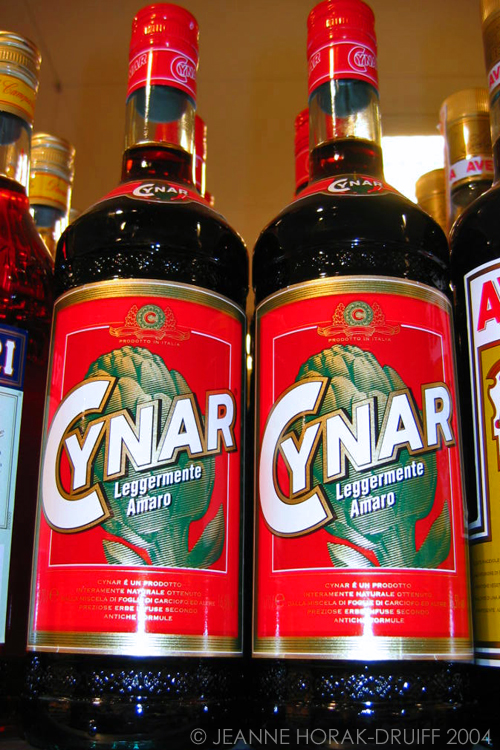 Eventually we ended up at Karlsplatz where we discovered the joys of  the Galeria Kaufhof (an absolutely marvelous department store), and went to check out its 6 floors of retail therapy. Managed to walk straight into… the food halls and I was instantly reminded of Selfridges in London – paradise! They had the best selection of German wines than I have ever seen in one place (usually good German wines seem difficult to find, even in German supermarkets) including bottles of eiswein and trockenbeerenauslese wines that you NEVER see. We instantly resolved to come back here on our last day to make up a German “food parcel” to take home with us! By this time it was lunchtime and we thought we’d better find our friends lest we lose them for the rest of the weekend.  We eventually tracked them down to a beer hall/restaurant called Zum Durnbräu (in Durnbräugasse, off Tal) – a big room with long communal wooden tables down the centre and booths down each side.  The place was PACKED, and almost exclusively with locals. We joined our collection of friends (Australian, Kiwi and Mexican) along with a party of three who were sharing the table – two Italians and an Austrian who had driven from Innsbruck for the day – so you could say it was a real League of Nations table! Nick had some of the Durnbräu beer which he really liked and which was served in lovely 500ml glass steins with hinged pewter lids. 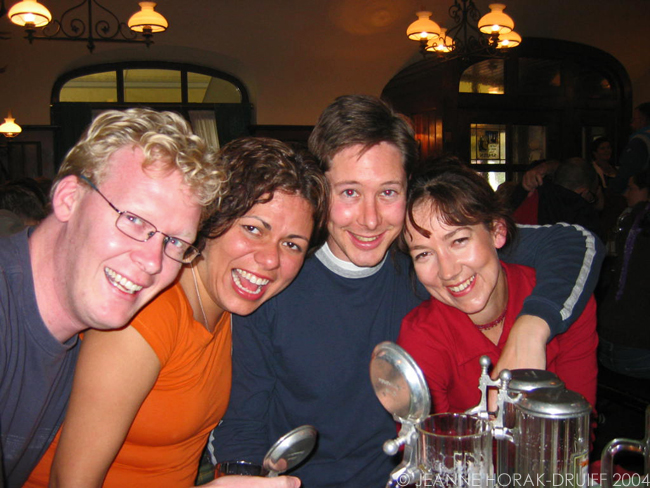 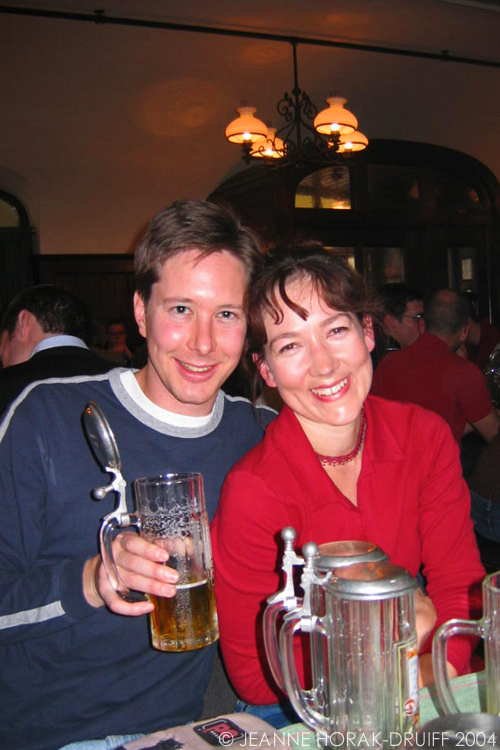 For lunch I had 4 little white sausages on julienne vegetables in a sweet vinegar broth – they looked like the famous weisswurst but I seem to recall they were called something else – it’s very hard to keep track of the local sausages in Bavaria!  Nick had four similar sausages but these were grilled and served on his beloved sauerkraut. Of course there was plenty of susser senf (sweet wholegrain mustard) to go with both dishes 🙂

At about 5pm we were told that the table was reserved for the evening and that we had to move.  Seeing as there were no free seats anywhere, we decided it was time to try somewhere else.  After much debate it was decided that we should try the Hofbräukeller which, like the Hofbräuhaus, is affiliated to the Hofbräu brewery, but is situated a little way out of the centre of town, so we hoped it would be a little quieter.  Walked down to the river, crossed it and walked through a lovely park – the walk is probably just what we needed to clear our heads!!  The Hofbräukeller consists of a seemingly endless series of beer halls, function rooms and dance floors.  The main beer hall (where we found a table) is a  cavernous room, probably with a lot less atmosphere than the Hofbräuhaus, but with room to move and (hallelujah!) vacant tables.  It was also almost entirely full of locals which made a very welcome change from the hordes of drunk tourists around the Hofbräuhaus!! Ordered some beers (your choice being Hofbräu, Hofbräu or Hofbräu) and a radler for me, but the guys decided that this was their least favourite beer – I have never seen Nick struggle so to finish a beer!! On a little exploration mission of the building we discovered a disco downstairs seemingly for over-60 lounge lizards and their partners – it was like a weird time-warp!  But when we attempted to set foot on the dancefloor we were very hurriedly shooed out – it was never made clear whether this was for our informal dress (jeans), our age (too young??) or our foreignness.  So I guess we’ll just have to live on in ignorance!

Soon after this, we left and went our separate ways, with Nick and I returning to our stamping grounds from last year around the Hauptbahnhof (main station).  Ended up back at the Greek place we had discovered last year (It may have been called Parga – I don’t recall now). It’s a real family-run local restaurant – most people coming in are greeted by name from behind the bar and you can sit and watch Mama in the kitchen, preparing falafel (but still elegantly dressed in her smart skirt, lipstick and little gold earrings – too marvellous! ). Got a little table by the window and ordered dinner.  I had a meze platter which was delicious and contained everything I like – taramasalata, tzatziki, houmous, dolmades, olives etc etc, all fresh and lovely.  Nick had lamb of some description (sorry , it was a long day and I’d had a few radlers!!) which he enjoyed.  I washed my platter down with a rather nice carafe of retsina, a wine which I’ve recently decided does not deserve half the bad things people say about it – I like it’s perfumed nose and off-dry palate, and it goes down a treat with Greek food…

Got back to our hotel to find a message from Martina of Snap Happy, one of my favourite photo blogs.  We had agreed to try and meet up in Munich, but I had missed her call – and I didn’t think calling back at midnight was appropriate (!) so I headed for bed, resolving to call her in the morning.