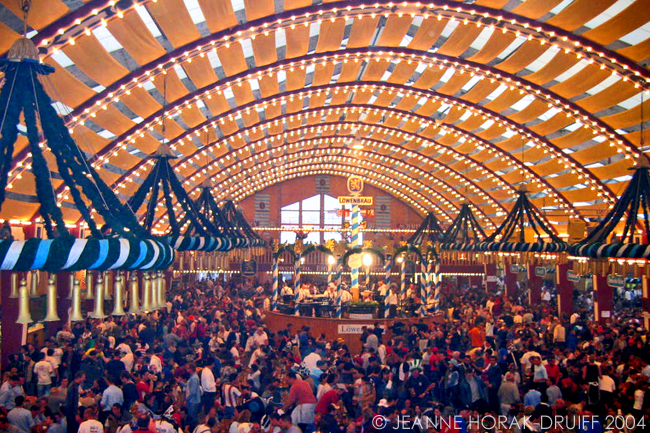 After Saturday’s disappointment (rain prevented us from getting into even one beer tent), we had resolved to get into the festival tents on Sunday even if it was the last living thing we did! After an early breakfast (have to marshal your resources before hitting the tents!) I tried to call Martina – no luck. The number was unavailable for the 10 minutes or so that we were in the room.  It turned out later that her phone cord had been pulled out, probably by one of her gorgeous cats playing at night, and so we never got to meet up 🙁 Walked down to the festival grounds where it was a little earlier and a little emptier than yesterday and headed straight for the Löwenbräu tent where the Löwenbräu lion (a big fiberglass number clutching a beer mug) was roaring “Löwenbräu!” in appropriately lion-ish tones every few minutes (I kid you not…) and where we had agreed to meet our friends.  Since the tent wasn’t particularly full yet, we found them quite easily and settled ourselves down at a table.  We had not been sitting down for more than 2 minutes when one of the army of waitresses approached us to take our order – clearly, you can’t just sit at a table and admire the scenery – you have to DRINK!!  So for the first time in my life I voluntarily ordered a beer (OK, so it was a radler) before 10a.m.!  I won’t bore you with the details of the day – I’ll just mention some highlights: So we spent the day steadily drinking beer, chatting to an amazing array of people, swapping e-mail addresses, taking photographs and having a fantastic time.  At about 8pm I finally found my coveted pair of bunny ears and immediately put them on – which instantly made me irresistible to the table of German guys next door, who had hitherto ignored me.  This rather annoyed Nick (!) – and made me wonder about the special relationship between German men and rabbits, as the same reaction occurred last year when I borrowed some bunny ears… Anyway, after many more beers, dances, songs and snapshots, the hour of 22h30 rolled around and we were INSTANTLY and unceremoniously chucked out.  Not “drink up, drink up, it’s closing time” – you turn your back and there is a waitress upending your table to mop underneath it!! So after 12 straight hours in the tents we emerged – surprisingly, still sober enough to walk and talk and think about dinner. Decided to fight our way through the crowds towards Hackerbrucke to try and catch the train to go to Lamm’s for dinner, but somewhere along the way this started sounding like too much hard work and in the end we had a pizza at Il Castagno near Hackerbrucke – sorry, no review on the food available – reviewer’s memory a bit hazy (what do you expect!?) 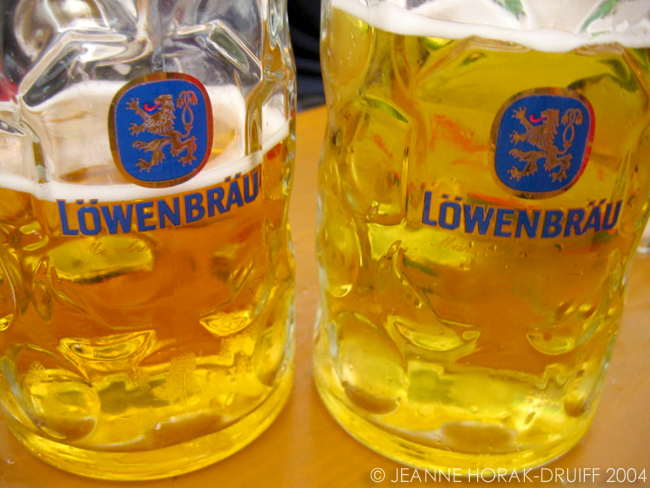 Monday morning I can safely say we felt FOUL!! Well, what were we expecting, right?  But we managed to drag ourselves down to breakfast in time to still get some food.  I thought I would not really want to eat but the sight of the chocolate cereal did WONDERS to revive me.  After breakfast, we checked out and decided to go walkabout near the hotel, where we managed to take in a HUGE and very upmarket furniture store (Karstadt, as I recall) in an amazing building made of steel and glass with a main door resembled a vertical trapdoor that opened up on hydraulic supports, like a car boot.  Very cool.  Then we moved on to the next one – a huge outdoor sports store. All the ski wear, camping gear, bicycles, kayaks etc etc etc you could ever want – Nick was in heaven.  The last store was a huge electronics store – quite mind-blowing.  Everything from Braun hand mixers to vacuum cleaners to fridges to a Bang & Olufsen studio and downstairs… a camera department!  Looked at everything and then came across the SLR lenses.  In the end, with Nick’s encouragement, I got myself a little treat – a 70-300mm Tamron autofocus zoom lens for my Pentax SLR (sorry – not a digital so I can’t even show off the beautiful photos it takes…). I LOVE it!!  Having fitted my new lens, we headed immediately for the festival grounds (like moths to a flame…!) to soak up the atmosphere some more and to take some pics.  All the ceremonial beer carts from the breweries (carts carrying decorated beer barrels and drawn by teams of beautiful horses all dressed up to the nines) were parked outside their respective breweries’ tents which provided some good photo opportunities. Wandered around taking a few pics – and the scary thing was that after peeking into a couple of beer tents, despite my hangover the idea of a stein of beer and some roast chicken did not sound too bad!  Wandered back into the old town and at lunchtime we eventually ended up at Wirtshaus zur Weiss-blauen Rose in one of the side streets running up beside the wonderfully Gothic city hall (Neue Rathaus).  We got a table on an open balcony almost directly on the pavement  – perfect for people watching.  The menu is pretty much traditional Bavarian and the whole place is done up in Bavarian blue and white.  For lunch, Nick had sauerbraten (beef roast that is marinated in a vinegary marinade before roasting & served with lots of gravy) which he pronounced delicious. I had gravadalax with salad and 4 rosti-like potato cakes – exactly what I felt like! The yielding saltiness of the fish and the warm crispiness of the potato cakes was a very happy marriage. After lunch we made our final stop – at the Galeria Kaufhof – where we stocked up on German goodies.  Can’t go home without our food parcel now can we!!  This necessitated a quick repacking of our backpacks to accommodate the purchases and then we had to make our way to the airport for the flight home.

And so another absolutely great Oktoberfest drew to a close.  All that remained was to get home, laugh over the photos and (of course!) unpack and eat/drink the food souvenirs, which I’ll be posting about shortly.