You are here: Home / Recipes / Leftovers / Chicken a la king – food fit for a king 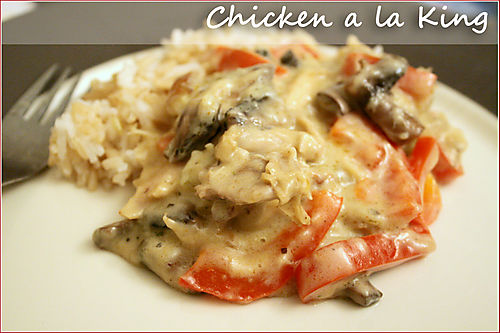 In the wake of yesterday’s posting where I denigrated my favourite dish as a 5-year-old, Chicken a la King, I was asked for a recipe so that the public can try both C a la K AND bobotie and draw their own conclusions. This would require some research as it’s not something I have ever made for myself. And my mom’s recipe book is safely on another continent…

So what is this beloved childhood dish of mine? Well, basically diced cooked chicken in a creamy sauce together with mushrooms, green pepper and pimentos. I do admit to always wondering where the name came from and whether there were any royal connections so I thought this was a good time to find out. As it turns out, C a la K is the subject of some dispute as to the origins of its name. The two most prevalent theories are:

1. The dish was created in the late 1800s by a hotel (either in New York or London) and named after a prominent equestrian family (some say the father, some say the son) called Keene. The dish was therefore originally “Chicken a la Keene” which was later corrupted to the present form of “King” OR…

2. The dish was created by a chef at the Brighton Beach Hotel, New York in either the late 1800’s or early 1900’s. He prepared a special chicken dish one evening for the owners, Mr. & Mrs. E. Clark King II. The next day, either Mr. King loved it and wanted it on the menu or the chef asked if he could put it on the menu. In either case, it was added to the menu as Chicken à la King ($1.25), and quickly became a great success.

OK, so maybe I was a little hard on poor Chicken a la King yesterday… It’s just that I have had it in its mass-catered form at too many parties and in too many hotel dining rooms where it has just degenerated into a gloopy, grey mass. No texture, no taste, no distinguishing features. But clearly, there was a time in my childhood when I equated this dish with the height of epicurean pleasure. My mother used to make a mean Chicken a la King for her swish dinner parties (OK, it was the 1970’s and our understanding of swish may be slightly different today…) and I always thought it was pretty damn fancy, given the royal connection and all 😉 But somewhere along the line it was hijacked as the “no red meat option” by every caterer in sub-Saharan Africa and became a standing culinary joke. I mean, would you ever order Chicken a la King in a restaurant? I know I wouldn’t – I’d be rushing past to get to the Parma ham and fig salad with balsamic syrup!! Maybe we are all too far gone down the path of being food snobs to appreciate mundane but well-executed cooking. No, C a la K is not great cuisine, but yes, it’s a great way to use up leftover chicken makes and a hearty, easy meal after a long day at work. So who’s to say it’s any less of a dish than a 4-cheese soufflé? Much as I would like to create fabulous gourmet meals out of exotic fresh ingredients every night, the reality of my life is that it will be sausages and mash more often than seared scallops on exotic vegetable puree… So I resolve this week to make some Chicken a la King, make it well and really enjoy it. Just like when I was 5.

CHICKEN A LA KING (From http://www.freerecipe.org)

Make a white sauce of the fat, flour, milk, cream, salt and pepper.
Add the mushrooms, green pepper, pimiento and chicken.
Cook until the meat is heated through. Just before serving stir in the egg yolks, slightly beaten, and cook for a moment, stirring constantly.
Serve at once on squares of hot toast, cooked rice or noodles.