There is a French saying that says: Trop de choix tue le choix , or “too much choice kills the choice”. At first glance, this seems rather paradoxical to people who have been brought up in a society where more choice is thought to equal more freedom and therefore be generally better for everyone. Surely nobody wants to return to the Crisp Dark Ages when the only flavours to choose from were ready salted; salt ‘n vinegar; or cheese ‘n onion?! Surely we would pine for our smoky bacon, prawn cocktail, Marmite, sweet chilli, ketchup, roast chicken, Thai green curry, or ham & mustard flavours? According to the Food Marketing Institute, between 1975 and 2008, the number of products in the average supermarket swelled from an average of 8,948 to around 47,000.  Tesco stocks 91 different shampoos, 93 varieties of toothpaste, and 115 of household cleaner. Lattes come tall, short, skinny, decaf, flavoured, iced, spiced or frappé. Jeans come flared, bootlegged, skinny, cropped, straight, low-rise, boyfriend, dark-washed or distressed.  But is the abundance of choice making us happier?

A Californian study found that out of two groups of shoppers presented with 24 jam varieties and 6 jam varieties respectively, the group most likely to go on and purchase jam after sampling was the latter (30%, as opposed to just 3% of the 24-sample group). So it would appear that up to a point, choice is good but that too many options requires too much effort to make a considered decision, creating anxiety rather than pleasure and prompting people to make no choice at all (or a hasty ill-considered choice to be regretted later).  “At this point”, writes Barry Schwartz in his book The Paradox of Choice, “choice no longer liberates, but debilitates.”

How refreshing, then, to visit a restaurant where you have practically no choices to make, other than how you want your steak cooked! Le Relais de Venise L’Entrecote is a paradox – a French restaurant, named after an Italian City.  In 1959, founder Paul Gineste de Saurs purchased an Italian restaurant called Le Relais de Venise (the Venice Inn) in the 17th arrondissement of Paris, near Porte Maillot. He did not have major ambitions as a restauranteur but was seeking primarily to establish an assured market for the wines produced by the family’s Château de Saurs winery in Lisle-sur-Tarn, near Toulouse.  Taking his cue from Café de Paris, a Geneva restaurant that opened in the 1940s, Paul decided for the sake of simplicity to give customers practically no choices and to serve only one menu: a simple salad of green leaves and walnuts with a mustard vinaigrette; followed by steak frites with a complex and flavoursome buttery sauce.  The only choices lay in the dessert menu and the wine list – but despite this seemingly retrograde menu with less choice rather than more, the restaurant flourished and became a Paris institution.  Later formally renamed Le Relais de Venise – L’Entrecote, the restaurant is today run by Paul’s daughter and has locations in Paris, London, New York and Mexico. 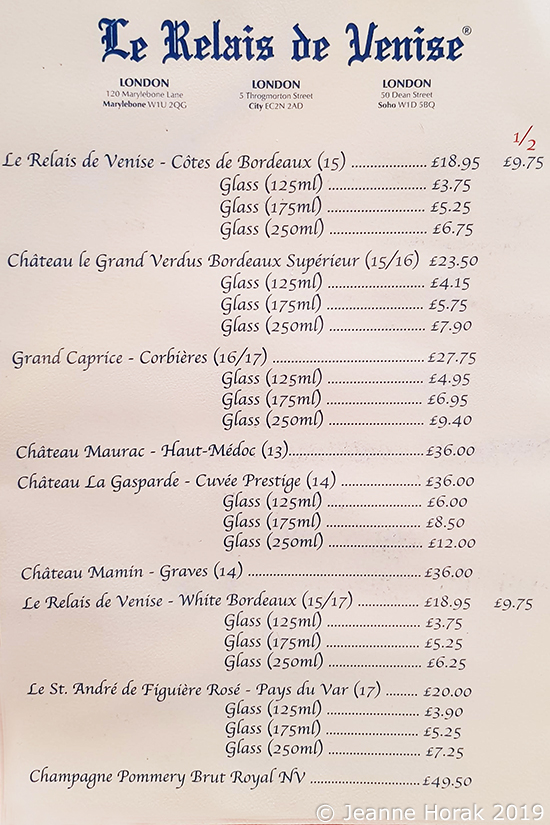 I recently visited the Marylebone branch in London and for an early lunch – you cannot book a table and at peak times, queues can be substantial.  But we were pleased not to find a long queue when we arrived and were shown directly to our table. Be warned, though, that by 14h30 or so, there was not an empty table in the house so my advice would be to go early! From the moment you step inside, the ambience is pure Parisian Brasserie with deep red leather banquettes, brass trimmings and marble-topped serving counters. As has been the case since the restaurant opened, all the waitstaff are women and all wear traditional brasserie waitress uniforms of black dresses and white aprons. The mood is relaxed and the crowd mixed – couples and families interspersed with tourists and larger groups. 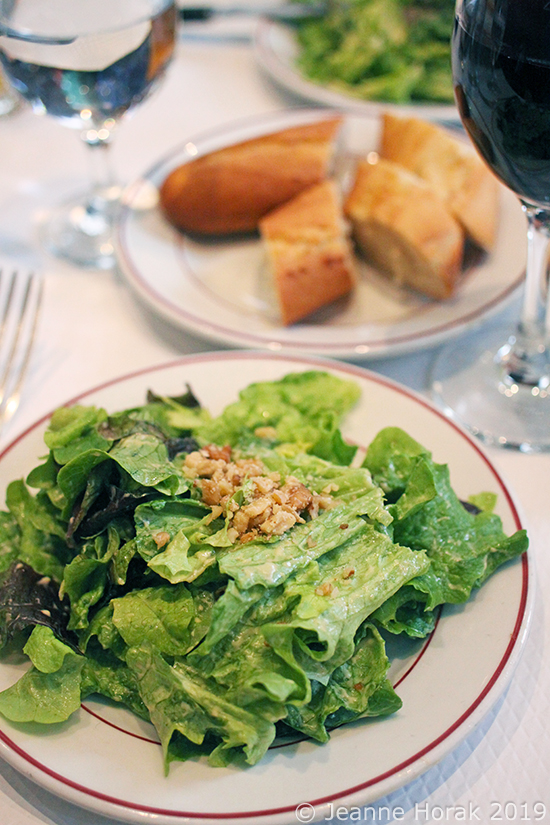 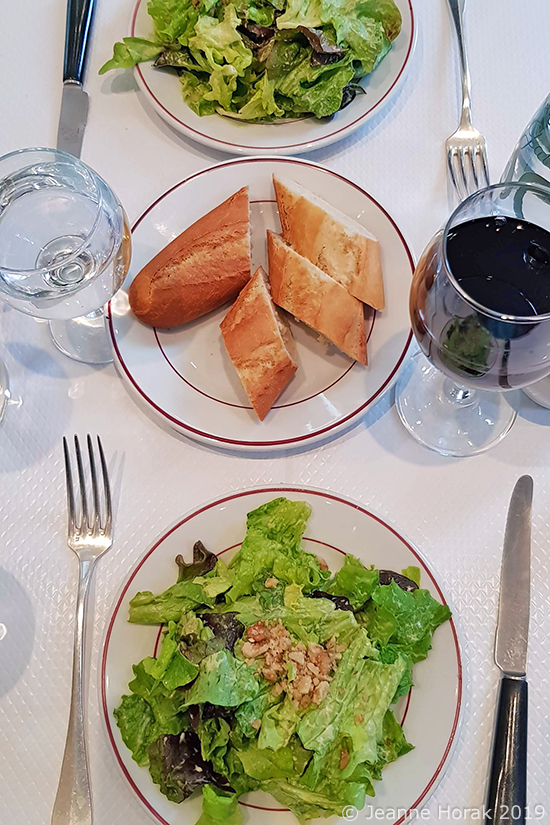 As soon as we were seated our waitress explained to us that there is no menu, only the decision as to whether you want your steak cooked rare, medium or well done.  There is, however, a brief and totally French wine list to choose from and every wine on it is available in different glass sizes, a half or a a full bottle, which makes a pleasant change. Having made our steak decision, we were served a starter salad of green leaves dressed with a tangy mustard vinaigrette and crushed walnuts, plus some baguette slices. In an age of ever more complicated and ingredient-laden salads, there is something pleasing about the simplicity of crisp, fresh green leaves with nothing but a really tasty dressing and the crunch of the walnuts. 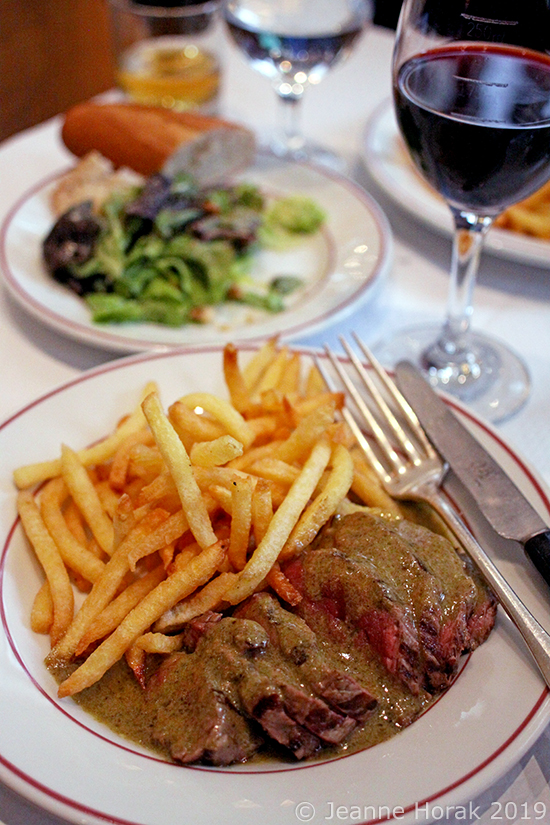 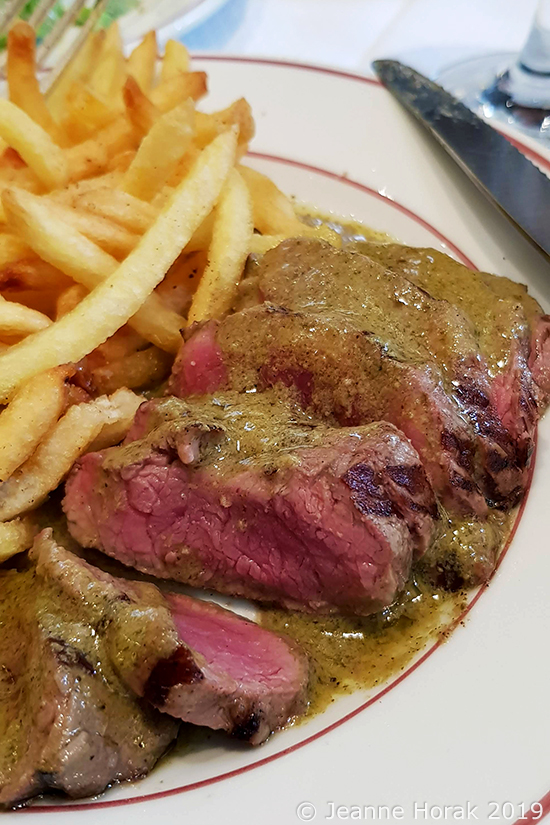 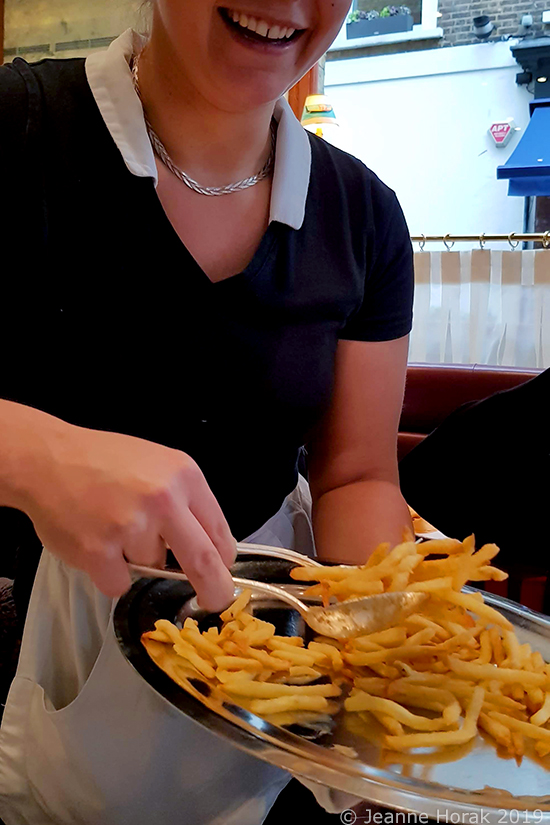 After the salad course, the waitress brought our steak (mine was perfectly rare) topped with the restaurant’s famous buttery sauce and a generous portion of fresh skinny frites.  If the steak does not seem very large, do not fret: the restaurant serves you half your steak initially and then the other half when you are done, so you don’t have to eat cold steak towards the end of your meal. The frites are also bottomless – just call your waitress over to refill your plate. Simple as though it may be, everything on the plate is good quality, well-prepared and delicious. 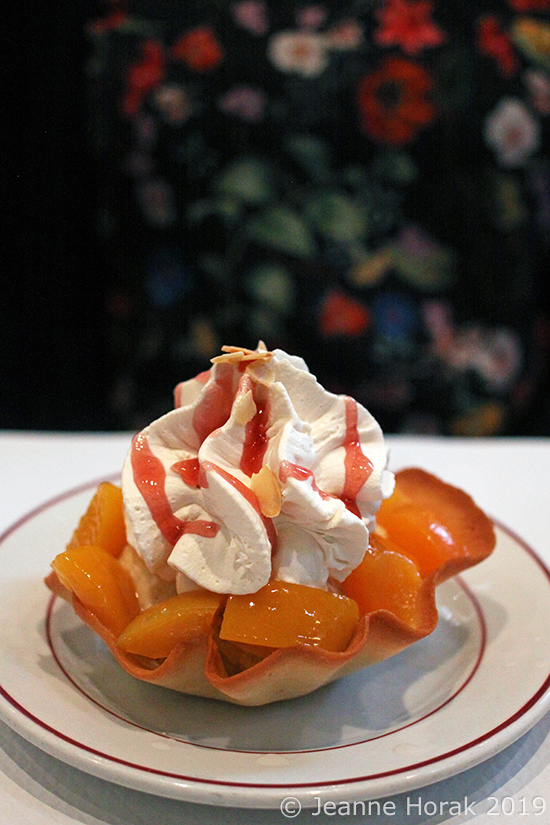 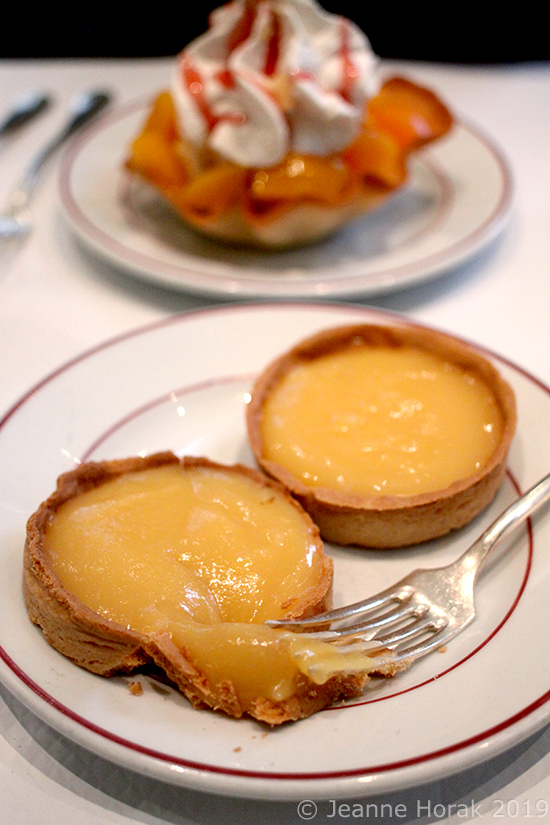 The other area where you get a choice is the dessert menu where you can choose from classics such as profiteroles, peach & apricot melba, lemon tart, chocolate tart, creme brulee, a cheese plate, and more (also the decidedly un-French Le “sticky toffee pudding“!). We chose the peach and apricot melba (£5.95) and the lemon tartlet which came as a set of two (£5.95), both of which were excellent – the lemon tart was particularly good with super tangy, appropriately wobbly filling and a uniformly crisp pastry case.

Service throughout our meal was smiley and efficient, and despite the restaurant being full there was no pressure on diners to leave so as to turn the table. The fixed price for the salad, steak and frites is £24, so including the dessert and a large glass of wine, you are still only looking at rather reasonable £40-ish per head. I will admit to having been somewhat dubious about the concept of a single dish restaurant, but the Relais de Venise concept is a simple, good idea brilliantly executed. The restaurant is never going to win any prizes for cutting edge culinary innovation, but it certainly deserves a prize for consistency.  Everything we ate was a textbook example of how it should be done, and delicious to boot – and in this age where everything is clamouring for our attention, it’s refreshing to visit a restaurant where your mind can take a little break from the endless choices. If you would your restaurant dining to provide a respite from the decision fatigue that plagues us in daily life, Relais de Venise provides a perfectly delicious solution.

Cost per head: £40 per head for 3 courses plus a large glass of wine
Nearest tube station: Bond Street/Regents Park

DISCLOSURE:  I enjoyed this meal as a guest of Relais de Venise but received no further remuneration to write this post.  I was not expected to write a positive review – all views are my own and I retain full editorial control.

Let’s keep in touch!
You can also find me tweeting at @cooksisterblog, Instagramming as Cooksister, or pinning like a pro on Pinterest.  To keep up with my latest posts, you can subscribe to my free e-mail alerts or like Cooksister on Facebook.