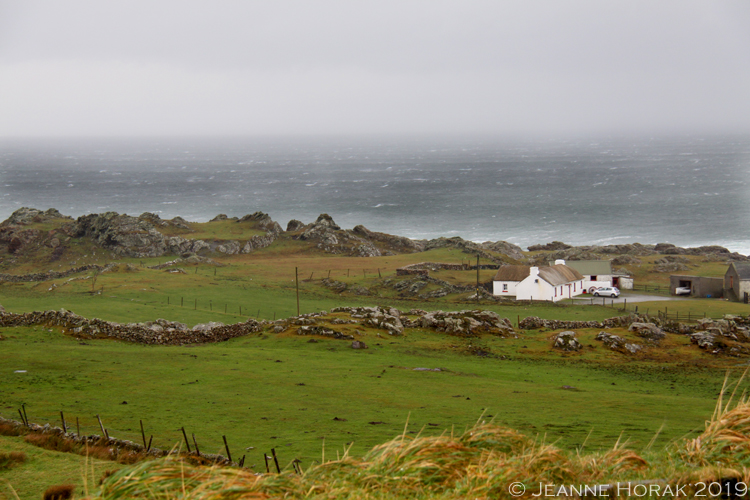 I had awoken in my cosy hotel bed in Derry to the sound of raindrops pattering on the window.  As I sat snuggled in my fluffy robe sipping a hot chocolate and watching grey clouds scud across the sky above the Peace Bridge, I did vaguely wonder if this really was the best day for a trip to see the famous Wild Atlantic Way and Malin Head, Ireland’s most northerly point.  Looking back, I guess you could say this was the qualm before the storm. Because a couple of hours later when our guide’s car pulled into the deserted parking area at Malin Head, we had been joined by an uninvited guest called Deirdre – or, to give her her full title, Storm Deirdre.  “Why don’t you have a stroll around, take some pictures and I will meet you back here in 10 minutes or so?” said our guide. “Noooo, don’t leave us!” yelled my inner voice.   Luckily my audible voice was composed enough to say hopefully: “This is a bit awkward, but I can’t actually push the car door open against the gale-force wind… perhaps you could roll down the window and we’ll just take pictures from here…?”.

The Wild Atlantic Way is a 2,500km coastal route of incredibly varied scenery stretching from Co Cork’s Haven Coast in the south of Ireland, all the way around the west coast to the Northern Headlands in Co Donegal.  The wild northern Co Donegal part of the route is home to a spectacularly wild coastline, some of Europe’s highest sea cliffs (at Sliabh Liag), millions of seabirds, Ireland’s most northerly headland, and even a chance of seeing the Northern Lights without leaving the UK. Derry is ideally placed as a starting point to explore the northern part of the Wild Atlantic Way, situated as it is at the intersection of Ireland’s two major coastal routes – the Wild Atlantic Way and the Causeway Coastal Route.  The wild and sparsely populated Co Donegal proved to be the ideal location for the filming scenes for Star Wars: The Last Jedi and the eagle-eyed Irish movie buffs would have spotted Malin Head as one of the locations on the fictional planet Ahch-to where Rey finally tracks down Luke Skywalker.  Apparently between filming, actor Mark Hamill popped into Farren’s Bar near Malin Head for a pint, much to the delight of locals. But on the day Demi, Deirdre and I visited, we saw more sheep than people and the howling wind and driving rain made sure that the Wild Atlantic Way lived up to its name in our memory.  Staring northwards out to sea at Malin Head, it was strange to think that the next significant landmass you’d reach from there heading north would in all likelihood be Iceland.  And although walking anywhere near the spectacular cliffs and headlands was out of the question in the storm, it was still mesmerising to watch the pounding surf and the wind driving the white foam caps across the ocean like galloping horses. 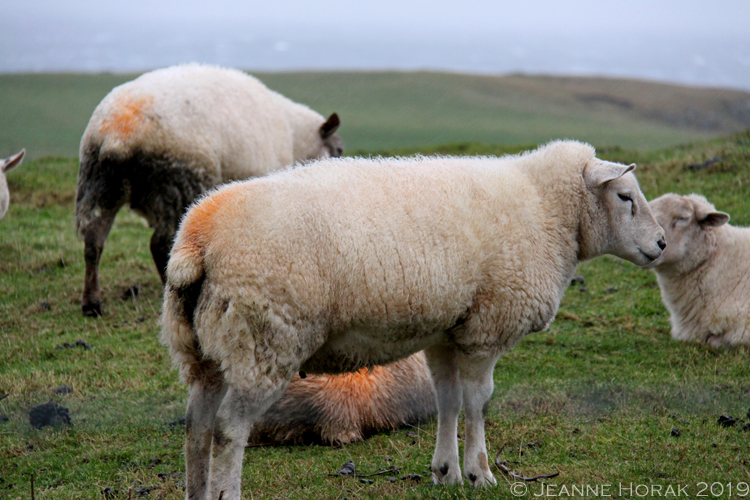 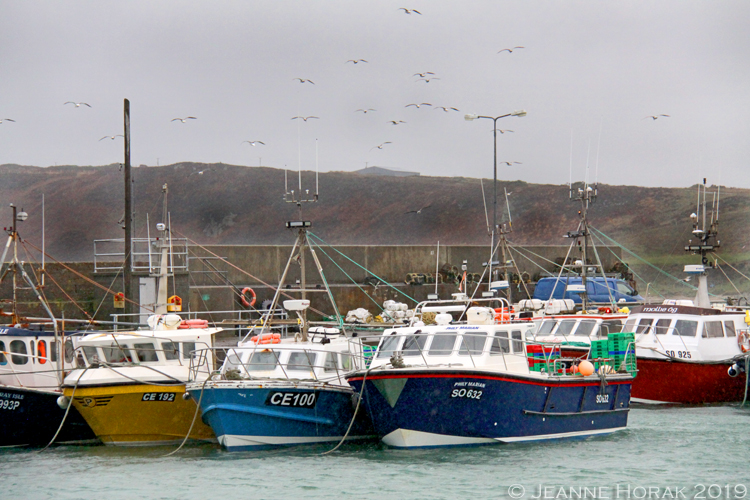 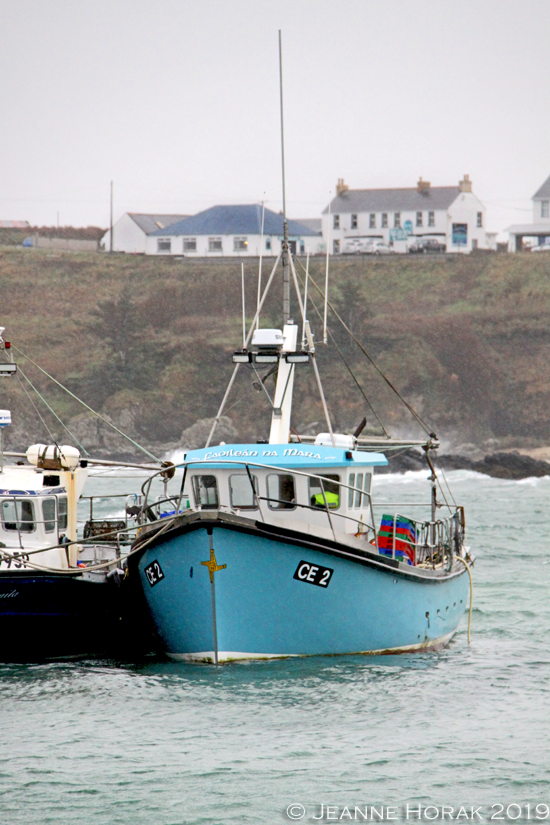 Cobwebs blown away, camera lenses dried off and fingers defrosted, it was time to be treated to some Co Donegal hospitality. For this we headed across the Inishowen Peninsula to the Foyle Hotel in Moville.  The hotel is situated in a 200-year old building on the town’s main street which has been totally refurbished to provide a contemporary and stylish base from which to explore the Wild Atlantic Way.  The hotel is owned and run by celebrity chef Brian McDermott, a regular on guest on Irish radio and TV and author of two cookbooks,  and his wife Brenda.  We were fortunate enough to have lunch with chef Brian and have him show us around the hotel bar (which offers an extensive wine list, signature cocktail menu and Brian’s own craft beer) and restaurant with its cosy fireplace and menu designed by Brian to showcase Donegal’s seasonal specialities and local producers.  With the harbour at Greencastle only a few kilometres away, seafood features strongly on the menu seafood will often be on a plate within only a few hours of landing.  Fishermen, farmers and all of the hotel’s regular suppliers are recognised on the menu – “even our milkman gets a mention”, jokes Brian,  showing their commitment to supporting and recognising local Donegal producers. Chef Brian also very kindly gave us each a copy of his beautiful recipe book, Donegal Table, packed with recipes inspired by the produce and heritage of Donegal. 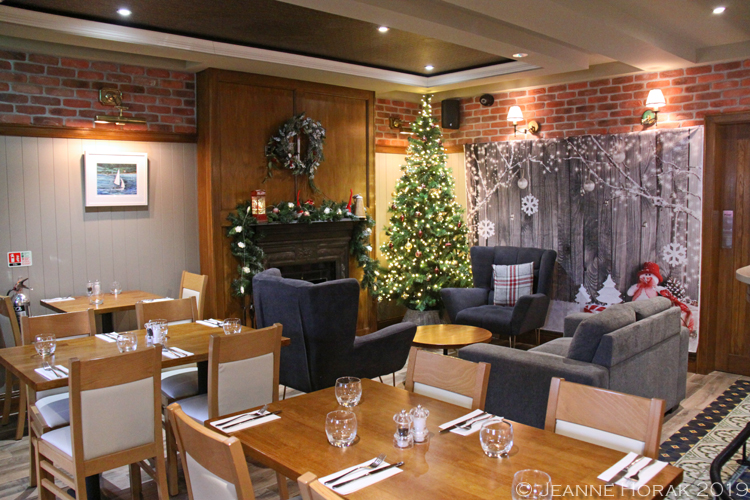 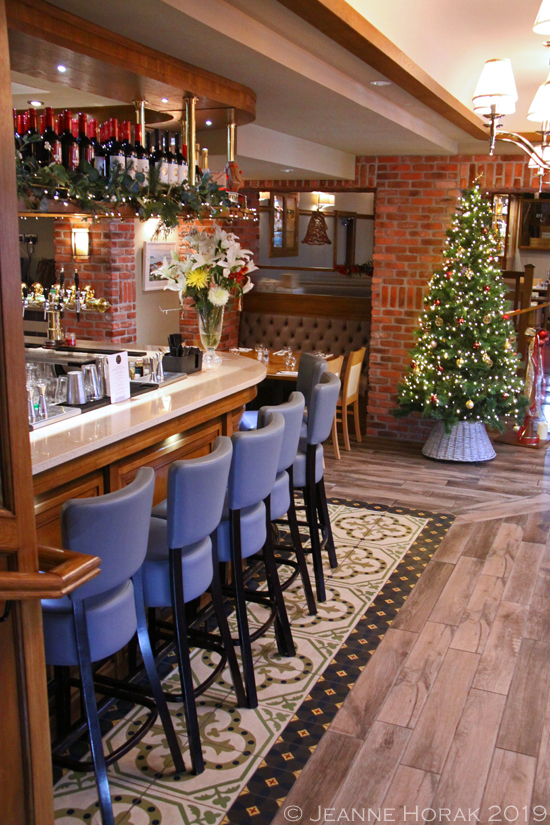 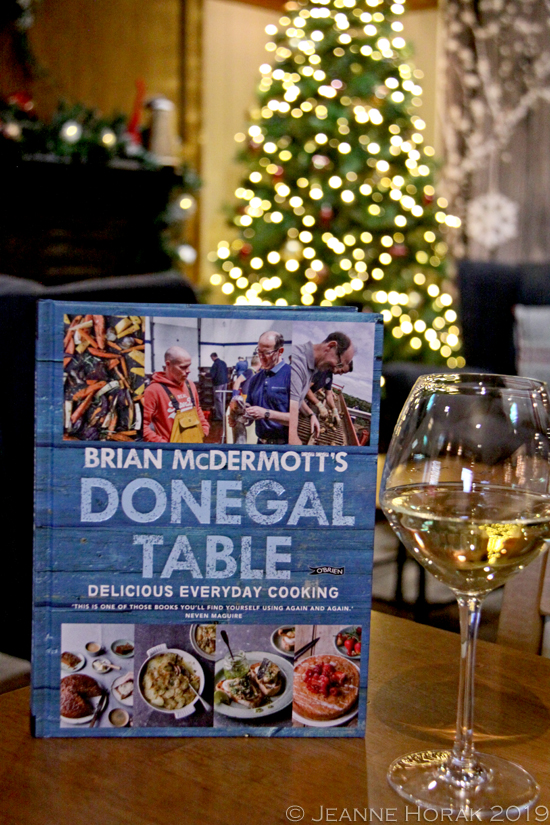 So what did we eat?  Brian insisted on bringing us two bowls of his local Mulroy bay mussels with buttermilk, barley, ham and parsley (£8.00) to share.  Brian explained that instead of the traditional white wine that foes into classic moules mariniere, he use buttermilk which gives a slightly tart, creamy edge to the sweet mussels – paired with smoky ham and nutty barley, it was one of the best mussel dishes I have ever had. Demi chose to start with breaded squid, chorizo & red pepper dressing on a chickpea puree (£7.50), a lovely colourful dish full of robust flavours; while I chose the seafood chowder with homemade wheaten bread and excellent Irish butter (£7.50). The creamy chowder was the perfect antidote to the storm outside and I loved the sweetness that added treacle gave to the nutty bread. For her main course, Demi chose the Finnebrogue venison cottage pie (£14.00), which she loved; and I had pan fried cod with a smoked brandade fritter, buttered spinach, sweet potato rouille and bouillabaisse (£15.00) – a wonderful dish of blindingly fresh fish, a crisp and salty fritter, and a rich seafood broth.  Having glanced at the dessert menu, it seemed rude not to sample some.  I adored my decadent chocolate creameux with salted caramel, brownie pieces and peanut praline (£6.00) – I love how well the savoury notes of the caramel and peanuts balanced the sweet, creamy chocolate.  Demi also loved her apple & cinnamon crumble with milk ice-cream and excellent vanilla custard (£6.00).  The meal was an outstanding introduction not only to the local produce and chef Brian’s metuculously prepared food but also to the legendary Donegal hospitality. 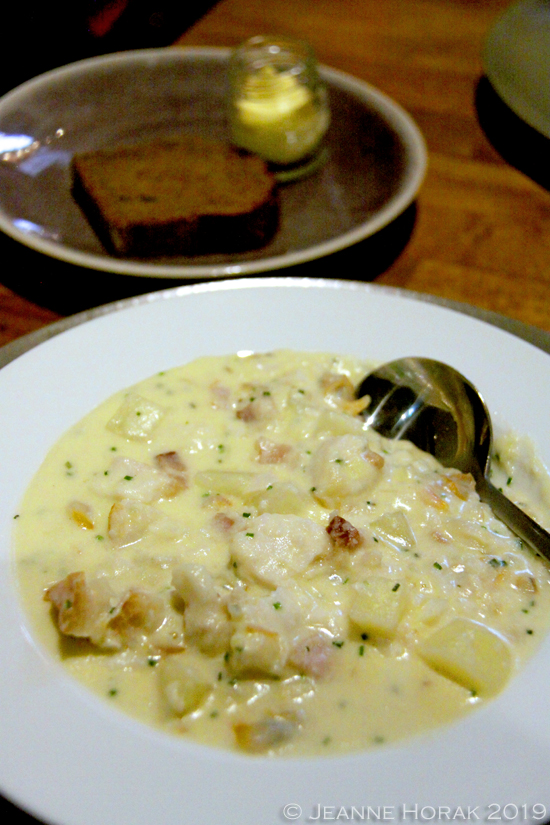 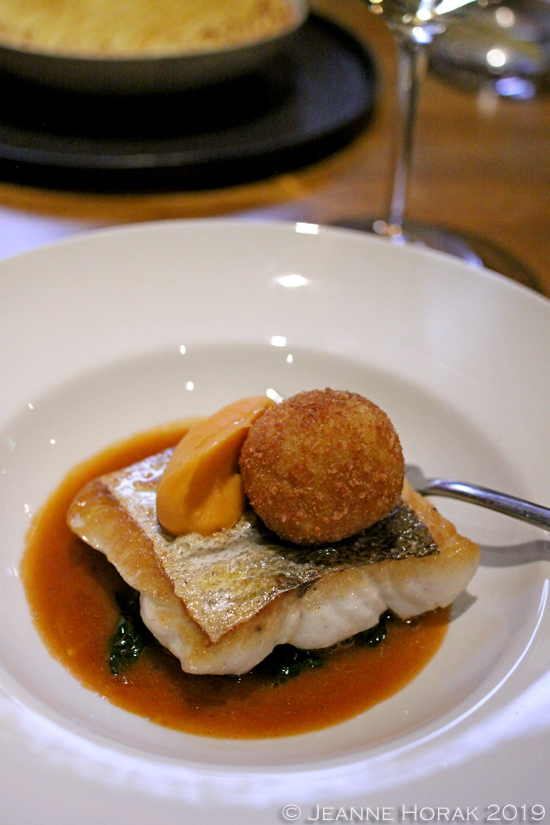 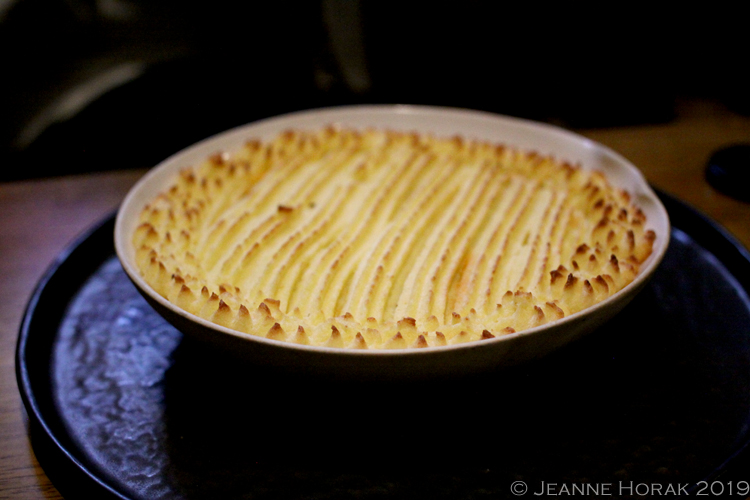 The Wild Atlantic Way stretches from Derry all around the west coast of Ireland to Kinsale on the south coast and Derry is a great starting point for exploring the route. For more information, see Visit Derry. Loganair operates daily flights from London Stansted to Derry Airport.

The Foyle Hotel Eatery is open for breakfast, lunch, afternoon tea and dinner, with the wine bar open from 4.30pm daily.  Chef Brian also runs cookery classes at the hotel, including a class that focuses on making recipes from his Donegal Table book.

If you enjoyed this travel post, you might also want to read more of my travel posts.

DISCLOSURE:  I enjoyed this meal as a guest of Visit Derry but received no further remuneration to write this post.  I was not expected to write a positive review – all views are my own and I retain full editorial control.

Let’s keep in touch!
You can also find me tweeting as @cooksisterblog, Instagramming as Cooksister, Snapchatting as Cooksisterblog or pinning like a pro on Pinterest.  To keep up with my latest posts, you can subscribe to my free e-mail alerts, or like Cooksister on Facebook.