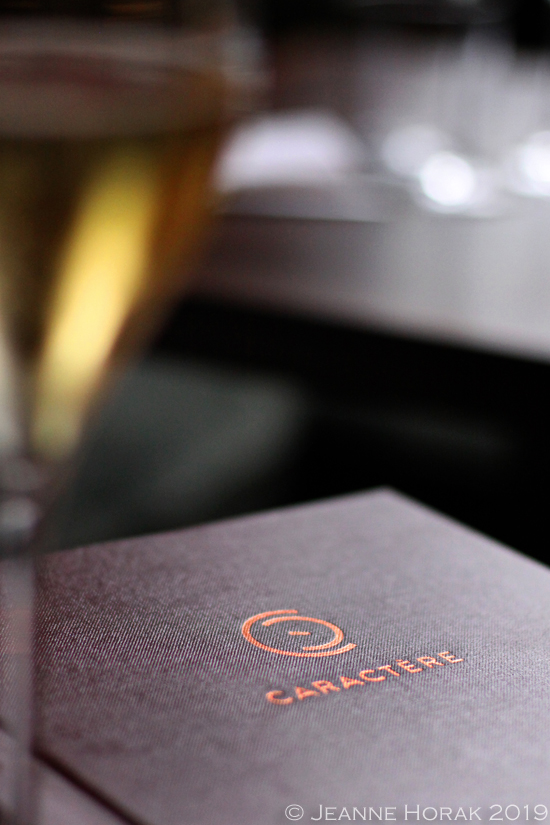 Abraham Lincoln once said: “Character is like a tree and reputation like a shadow. The shadow is what we think of it; the tree is the real thing.”  I always feel for the children of famous people growing up in the shadow of their parents.  This problem is particularly acute when those children are brave (or foolhardy!) enough to venture into the same field in which their parents are famous. They are quite literally living in the reputational shadow of what we think of their parents. And it is only by proving their own character that they get to step out of those long shadows and start being regarded as the tree – “the real thing”.  And Emily Roux is one acorn from a famous culinary family whom I feel is destined to become a mighty tree, judging by her and her husband’s recently opened restaurant Caractère in Notting Hill.

Emily Roux is practically restaurant royalty, coming from a family of exceedingly famous French chefs.  Her uncles, Michel Roux and Albert Roux, opened Le Gavroche which became the first restaurant in Britain to be awarded one, two and then three Michelin stars.  The brothers then went on to open the Waterside Inn which became the first restaurant outside France to hold 3 Michelin stars continuously for 25 years.  Albert’s son (Emily’s father) Michel Roux Jr now owns Le Gavroche in Mayfair and despite adopting a more casual approach and menu, still holds two Michelin stars. You woulds think that, in light of the weight of family history and public expectation, when Emily chose to strike out on her own she might feel naturally inclined to serve French cuisine. But the menu at Caractere sits squarely on the border between Italy and France, thanks to her husband and business partner Diego Ferrari. He takes the helm in the Caractere kitchen, having spent seven years working under chef Alain Ducasse and then two years as head chef in Le Gavroche.  Emily handles front of house (despite having trained at Institut Paul Bocuse in Lyon, France, and worked at the Michelin-starred Akrame in Paris) – the couple say there would be too many disagreements if they were both in the kitchen! 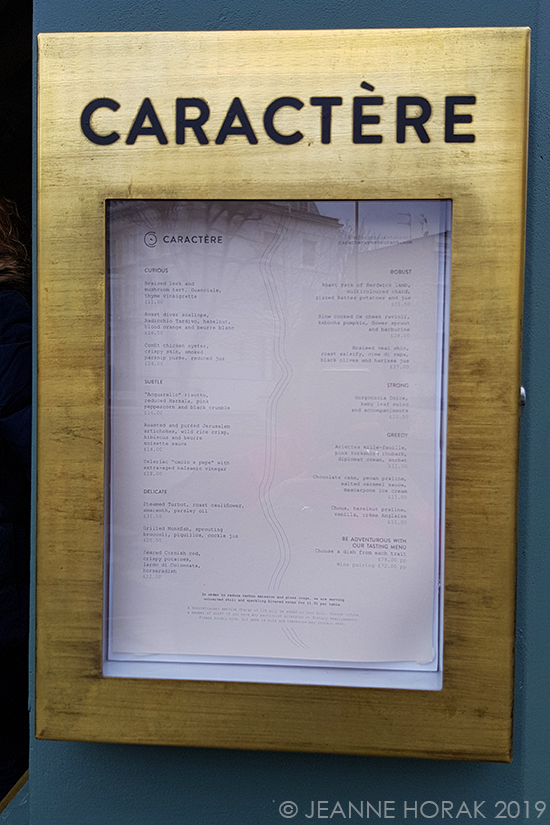 I had no idea what to expect when I stepped through thick velvet curtains and into the restaurant on a recent blustery Saturday afternoon.  It is a handsome and intimate-feeling space with exposed brick walls, touches of warm brass, plush velvet banquettes and rather gorgeous mid-century modernist style chairs and chandeliers. On the walls were some rather beautiful monochrome city maps with gold accents (I think the one above our table was Milan).  It is a space where I felt at home, rather than somewhere I felt I had to be on my best behaviour and speak in hushed and reverent tones! The menu is rather unusually divided into so-called character traits rather than courses: “Curious” (three starters/small plates); “Subtle” (three vegetable dishes); “Delicate” (three fish dishes); “Robust” (three meat dishes); “Strong” (a cheese course); and “Greedy” (three desserts).  Everything can be ordered as a la carte items, or alternatively you can select a dish from each ‘trait’ to make up an excellent value £78 tasting menu; or a £39 three-course lunch menu. We elected to order a la carte. 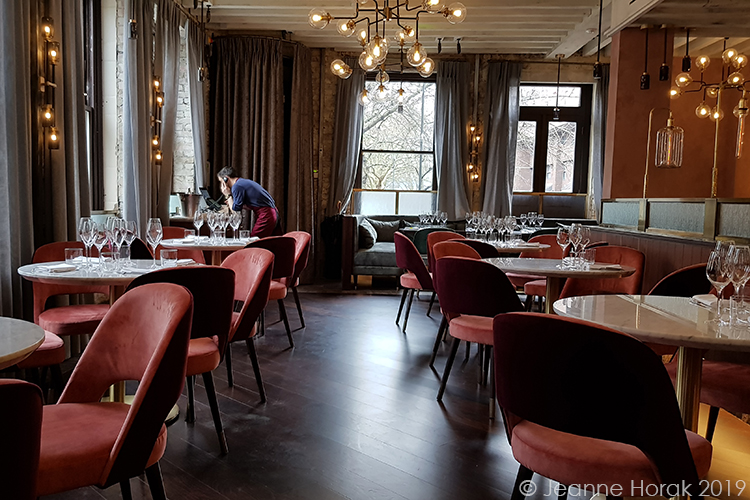 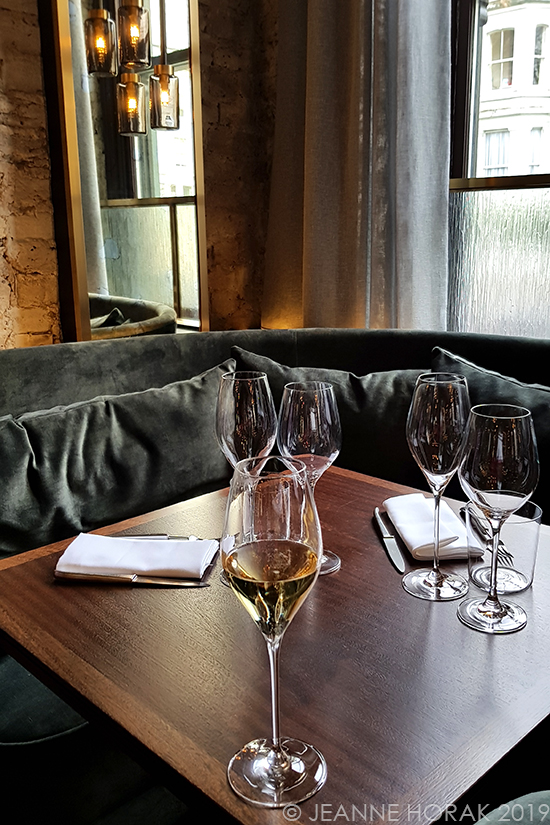 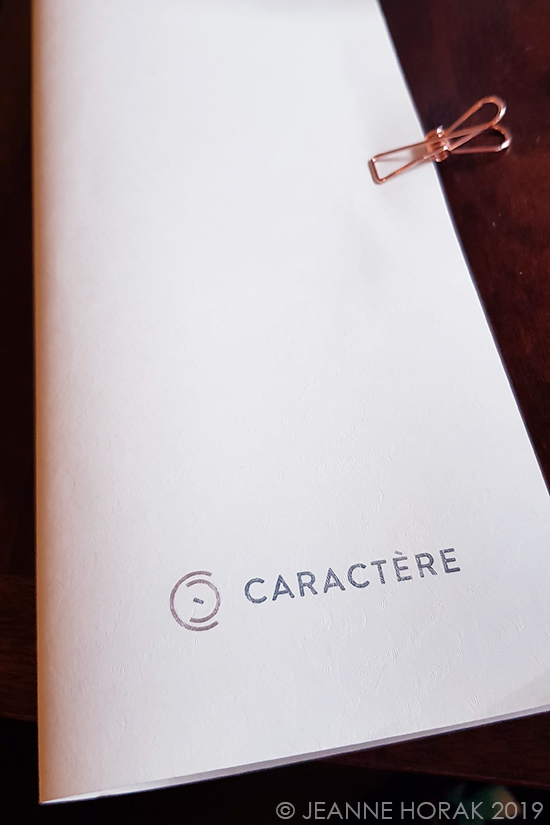 An amuse bouche arrived on a (no doubt bespoke) thick and textured ceramic tile, consisting of three elements: a homemade and insanely thin Bourbon biscuit filled with a smear of subtly salty sardine butter; a polenta crisp topped with morsels of smoked ricotta; and a bite-sized miniature tigella flatbread from Emilia Romagna filled with silky Italian ham.  The Bourbon biscuit was actually almost savoury in its concentration of cocoa and I loved the combination with the subtly salty sardine butter.  The pillowy little tigella roll was fabulous too, especially paired with a glass of bubbles.  When the excellent bread arrived, I fell instantly in love with the quirky butter knife that stood up on its own wide, flat base – genius! 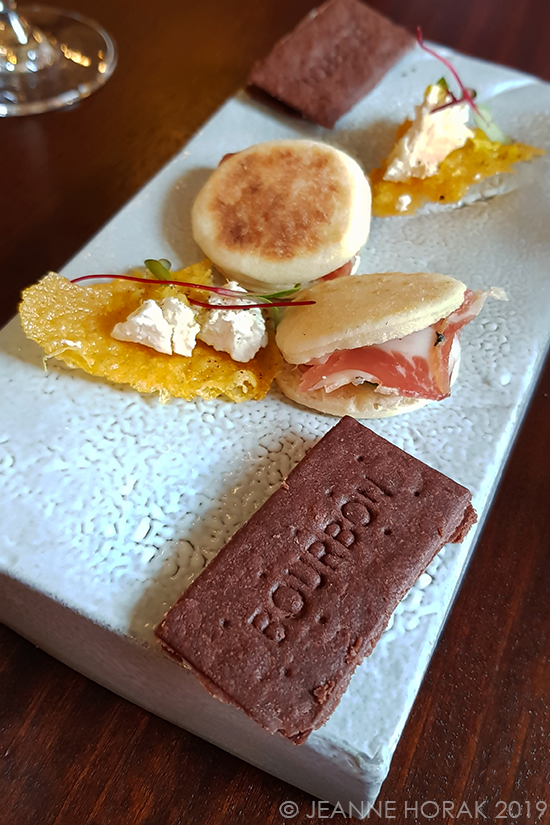 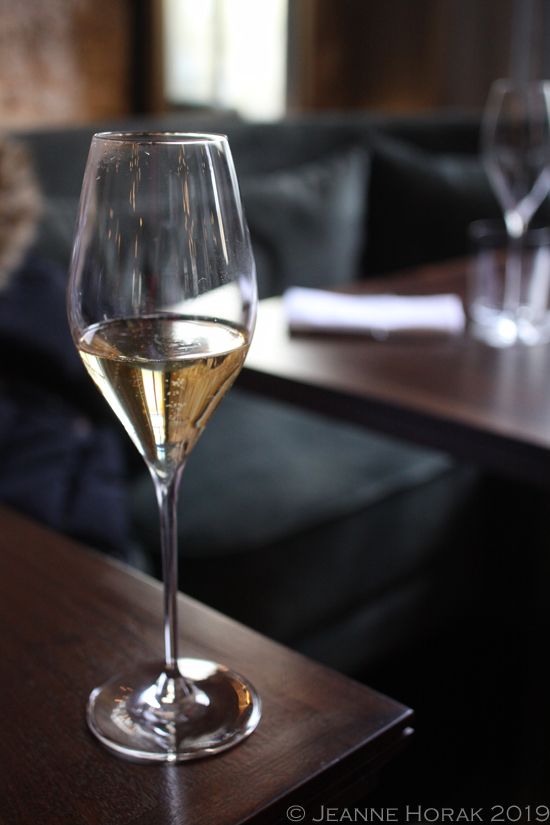 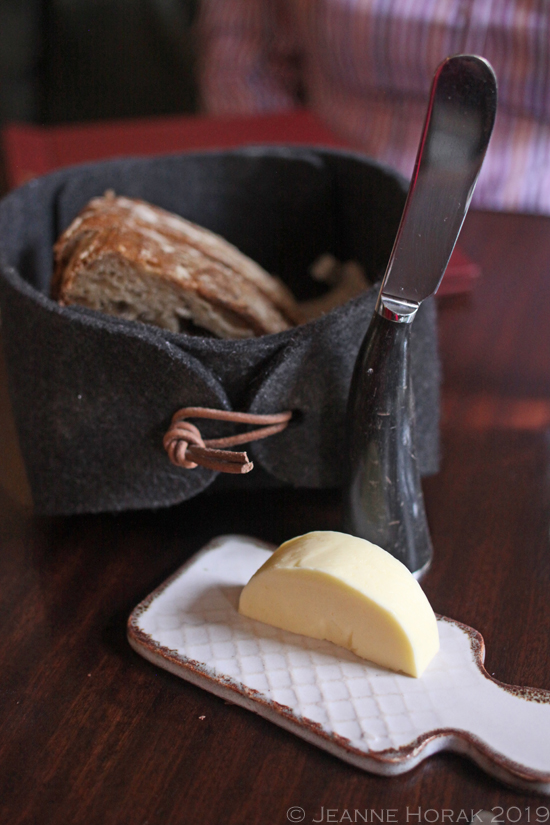 For my starter, I ordered the Acquarello risotto from the “Subtle” section (£16.00) and my friend ordered the roast diver scallops with radicchio tardivo, hazelnuts, blood orange and buerre blanc from the “Curious” section(£16.50).  I had been vacillating between the risotto and what has become the restaurant’s unofficial signature dish, the celeriac cacio e pepe with extra-aged balsamic vinegar (£18.00) so at our waitress’s suggestion we ordered a portion to share. I don’t normally order risotto as it is so often underwhelming and I come away feeling I can do better myself at home, but this risotto was utter perfection. The kitchen uses Acquarello, a brand of aged carnaroli rice which retains its shape better during cooking, and unusually makes the risotto using water instead of stock to emphasise the flavour of the rice. It was topped with a sweet marsala reduction and a moreish black Parmesan crumble. The rice was perfectly al dente, retaining a perfect amount of resistance, and had a luxuriously creamy texture, flavoured only by the butter and cheese stirred in during cooking. I adored the contrast between the sweet reduction and the salty crumble, although neither ever overpowered the essential flavour of the buttery, cheesy rice.  A simple, perfect dish. The plating of the scallops was made sculptural by the radicchio and my friend Kirstie declared them to be delicious. But the surprise of the day was the celeriac cacio e pepe. The secret to this deceptively simple ancient Italian dish is the creamy sauce made without butter or cream but rather by combining grated Pecorino Romano with a few spoons of the water used to cook the pasta plus black pepper. The twist here was that the dish was made with thin ribbons of celeriac instead of pasta, and it works fantastically well – both in terms of texture and taste as well as a nod to the carbophobic world that we live in. It was finished at the table with a few drops of 25 year aged syrupy balsamic vinegar from Modena which made the perfect foil for the salty cheese sauce and the earthy celeriac.  An inspired combination that richly deserves the title of signature dish. 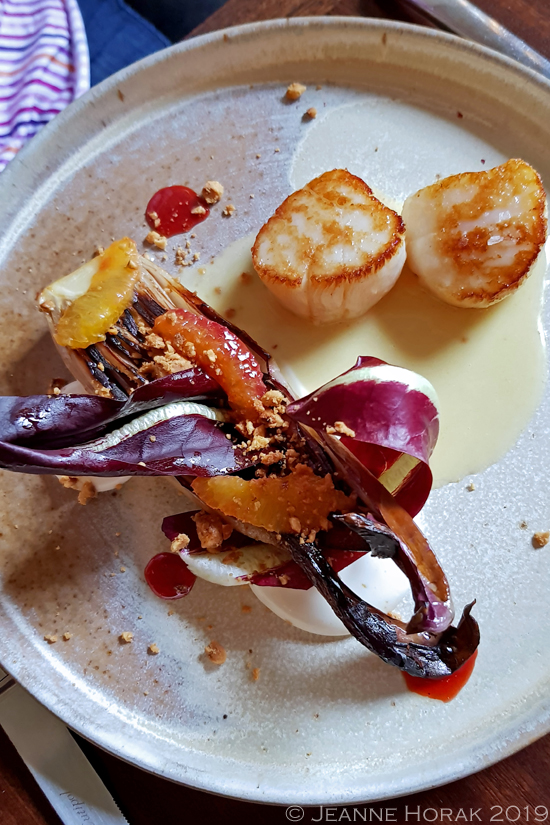 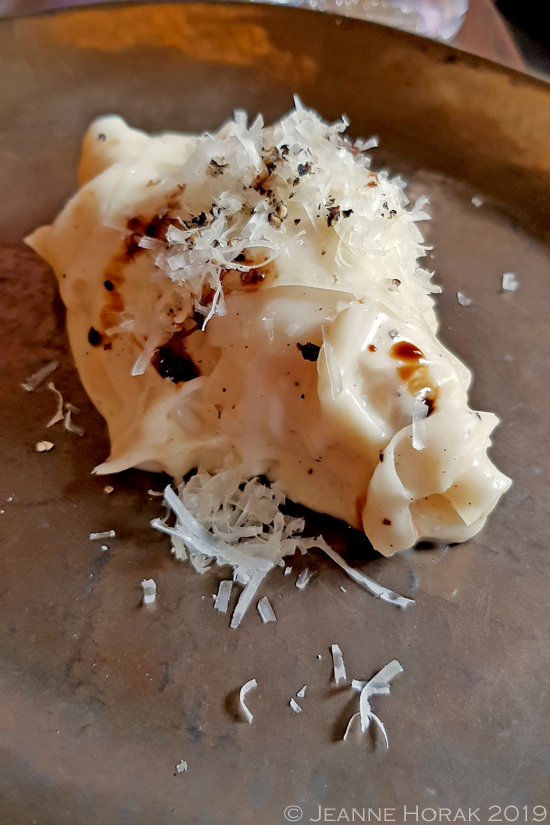 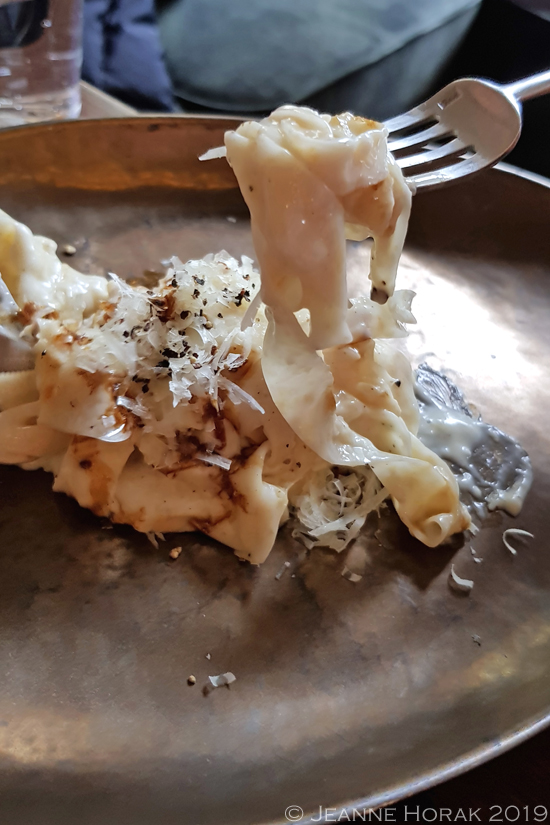 For her main, Kirstie ordered the  slow-cooked ox cheek ravioli with kabocha squash, sprout leaves and barbucine (a type of endive) (£24.00) from the “Robust” section; and I ordered the and I ordered the steamed turbot with cauliflower, baby leeks, broccoli shavings and amaranth (£31.50) from the “Delicate” section.  These two perfectly executed dishes seemf to sit at opposite enda of the delicate/robust continuum, with Kirstie’s ravioli providing a butch and earthy foil for my pretty, girly and delicate fish.  The ravioli were plentiful and filled with tender, richly flavoured meat while the kabocha and sprout leaves were slightly charred, adding a gently smoky flavour (and hints of colour) to the whle.  She pronounced it both delicious and surprisingly filling. My fish was gorgeous in an entirely different way and reminded me that we do nto see turbot on menus nearly often nough. The fish was perfectly cooked – moist but easily flaked with a fork – and not overwhelmed by the gentle nutty flavours of the brassica. Amaranth added crunch and the microherbs added a pop of colour ,and the whole dish was beautifully balanced and perfectly seasoned (something which I often find lacking in resataurants of late).  I ate as slowly as I could to prolong the pleasure.  Together with all our dishes, we shared a bottle of wine and I had asked the sommelier to recommend something white, Italian and aromatic from the (excluvsively French and Italian)  wine list.  His suggestion of a 2017 Langhe Riesling, “Pétracine”, G.D. Vajra (£59.00) from Piemonte proved to be an excellent one and there was no attempt to up-sell.  There is a good selection of wines available by the glass and bottles start from £40 for a white and £50 for a red, with a good selection in the £40-£60 bracket. Our waitress (also Italian) was both knowledgeable about the menu and very charming, as were all the staff that we dealt with. 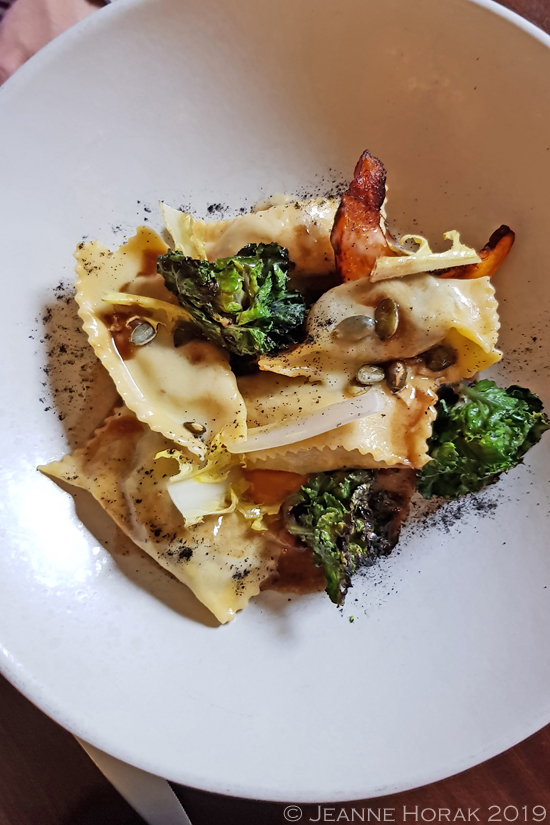 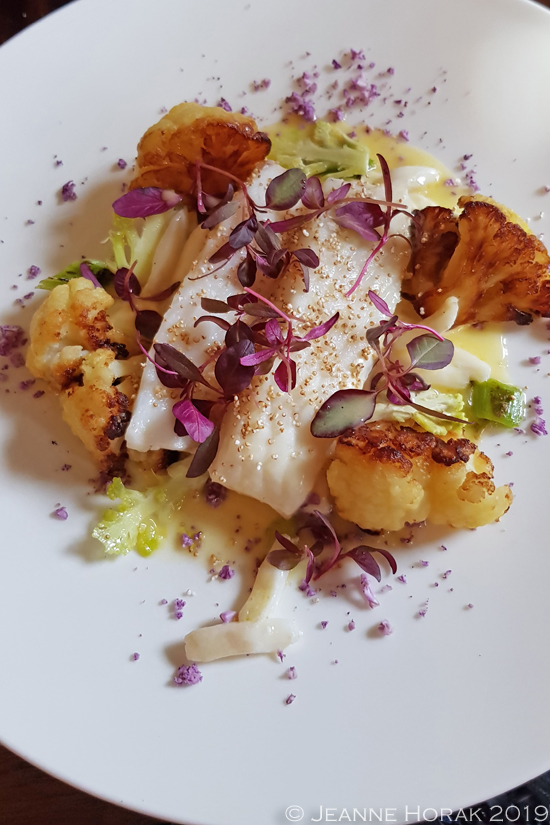 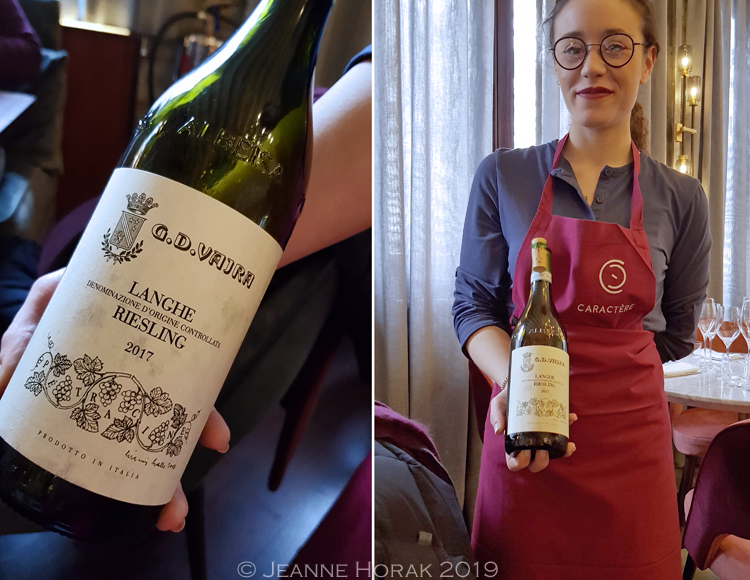 Kirstie decided to forego dessert in favour of a glass of Moscato, but I could not resist Arlettes mille-feuille with Yorkshire rhubarb, sweetened diplomat cream and rhubarb sorbet (£11.00).  What a feast for both the eyes and the tongue! An arlette is a thin layer of cinnamon-flavoured caramelised puff pastry, made in a similar way to palmiers, but due to the labor it requires it has largely fallen out of favour.  In this mille-feuille it took on an almost brandy-snap consistency and crunch which I preferred to the more tradtional pastry layers of a mille-feuille.  The poached rhubarb provided a gloriously hot pink, tart contrast to the diplomat cream, but the standout was surely the rhubarb sorbet which captured the elusive flavour of rhubarb perfectly.  I have to mention here that I was sorely tempted to make off with their gorgeous cutlery – slim, sleek and elegant in a modernist Scandi kind of way – I was smitten! Coffee was served not with petit fours but with a more substantial mini-brioche topped with sugar and creme fraiche. 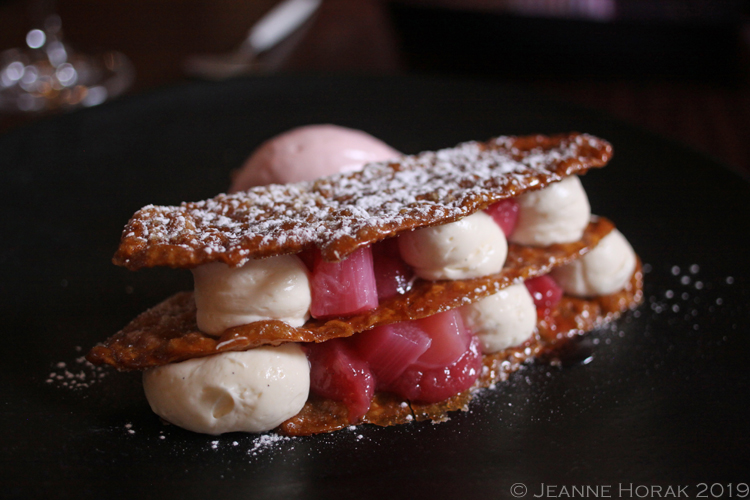 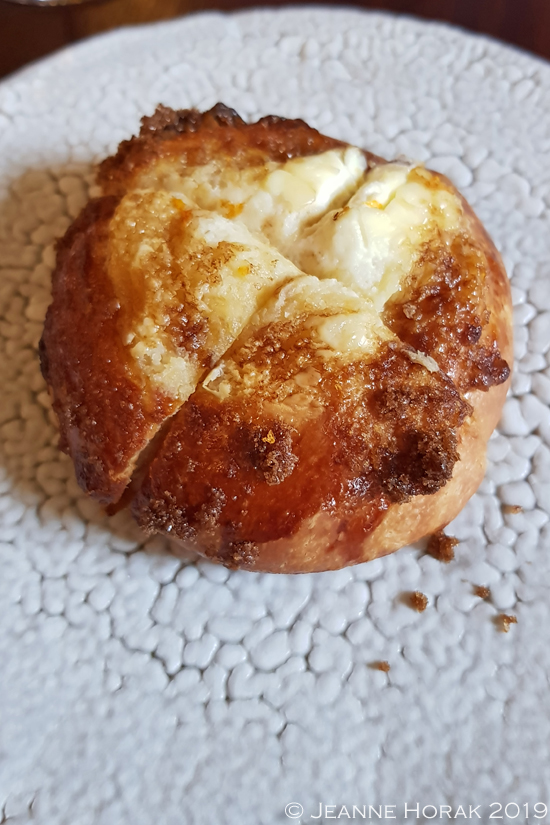 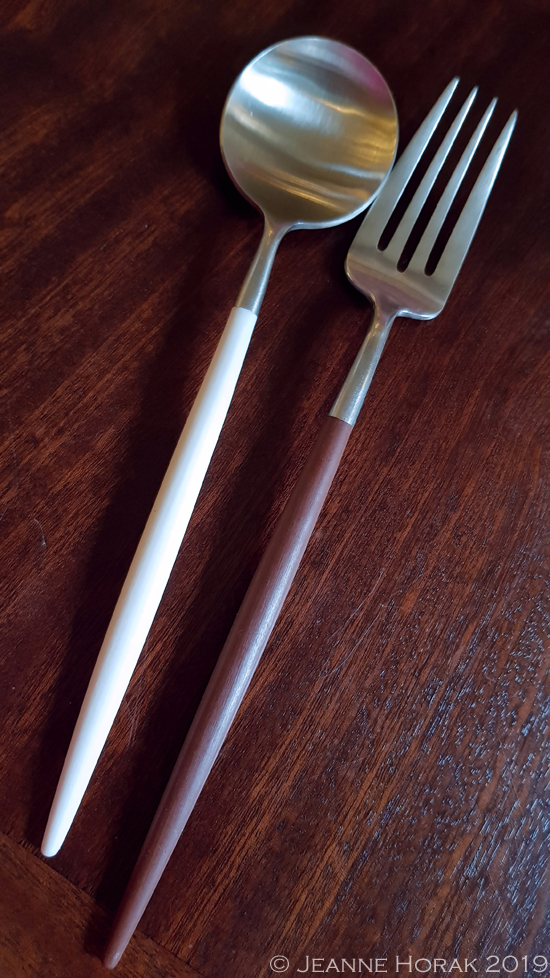 Having arrived at Caractère with no preconceptions or expectations, I left three hours later as a convert.  Everything that we had eaten had been outstanding and there was not one lacklustre moment in our meal.  I liked the style of the room and the knowledgeable, friendly but not obsequious staff (not always an easy balance to strike). Given the quality of the food, I think the tasting menu represents very good value for money, as does the democratically priced 3-couse lunch menu. I would be very surprised indeed if the restaurant did not get a starry nod from the Michelin inspectors during 2019 so my advice is book now, while you can still get a table. I have already booked a return visit 🙂

Cost per head: approx £110 for the food described above, including wine and a glass of Champagne each. Tasting menu available for £78, or a 3-course lunch menu for £39
Nearest Tube station: Westbourne Park