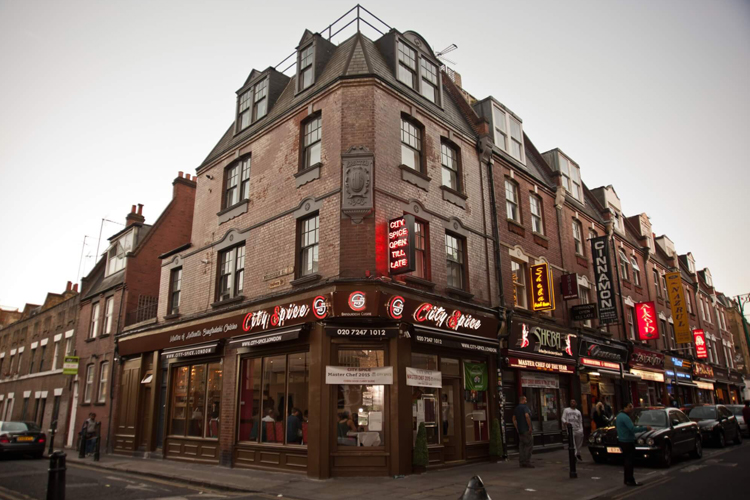 Image © and courtesy of City Spice

A late-night curry in Brick Lane is one of those rites of passage that everyone experiences when they live in London.  More often than not, this follows on a long evening of after work drinks somewhere in the City and suddenly the soberest person in your group notices that it is ten thirty in the evening.  Some food is becoming increasingly imperative, but the options for dining venues are beginning to narrow as kitchens start closing. This realisation is usually followed about 30 seconds later by the hailing of a cab and a request for the driver to drop his passengers off in Brick Lane. As a general rule, the group will fall into the restaurant where the tout at the door offers the most free booze and the table’s order will be split roughly 50/50 between overly-sweet chicken korma and tongue-searingly hot beef vindaloo.  Few of them will remember the following morning how that orange stain appeared on their good silk tie.

I recently had a very different experience on a visit to Brick Lane to dine at City Spice, a restaurant that has occupied its prime corner position opposite the Old Truman Brewery for 28 years and where I am pretty sure I have eaten before on some hazy evenings in the dim and distant past, under previous management.  As with pretty much all of Brick Lane’s predominantly Bangladeshi and Indian restaurants, there was a staff member on the pavement to entice potential customers inside – but unlike many other restaurants, I soon learnt that this was the owner himself, Mr Abdul Ahad.  “Just protecting my patch”, he chuckled when I asked him why he chose to stand outside himself rather than delegating this job. He told me that he had only taken over the restaurant in September 2015 and undertaken a complete refurbishment as well as an overhaul of the menu which now reflects an unusual fusion of influences from the North Indian Mughal Empire and Bangladesh. The investment has clearly paid off as in the past 12 months alone, they have scooped a number of awards including Best London Restaurant 2016 at the Bangladeshi Caterers’ Association Awards 2016;  Best Tower Hamlets Restaurant at the Curry Life Awards 2016; a Tripadvisor Certificate of Excellence in 2016; and Best London Restaurant in the Masterchef Curry Awards 2017. So it was with understandably high expectations that we sat down to our meal! 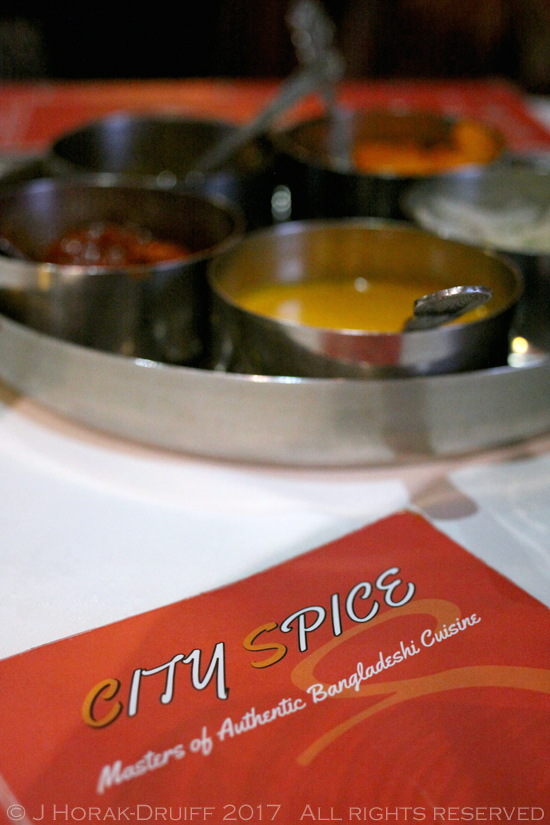 Wwe started off with excellent crisp and not at all greasy poppadoms (£0.75 each) and a selection of traditional dips (£0.75 per person) including chopped onions, spicy lime pickle, mango chutney, mildly spiced raita, and a sweet coconut chutney with the crumbly consistency of a Bounty Bar’s filling and an alarming day-glo orange colour.  The latter turned out to be the surprise hit of the evening, being both strangely addictive in consistency and an excellent foil for the spicy lime pickle. While we nibbled we examined the menu which is extensive and includes a good selection of vegetarian options in both the starters and mains. Dishes are divided into all-time favourites (which is where you will find the chicken tikka, rogan josh, madras and the like); balti dishes; dansak dishes; jalfrezi dishes; biryani dishes; and dishes done in the tandoori oven.  Unusually, there is also a separate section of freshwater fish dishes  as well as sections of Bangladeshi dishes  namely rezala, ureebisi gatta, and lightly spiced dishes cooked with shatkora fruit from the Sylhet region of Bangladesh.  For starters we shared lamb chops, marinated with fresh ginger, garlic, herbs, yogurt and ground spices, slow cooked in the tandoor (£5.95 for 2) and shingara pastry parcels filled with chicken tikka, vegetable and cheese (£3.95 for 2).  The shingara were tasty and generously filled, if a little doughy for my taste, but the lamb chops were outstanding: juicy, tender and pink in the centre with a good smoky char on the outside and subtle spicing. 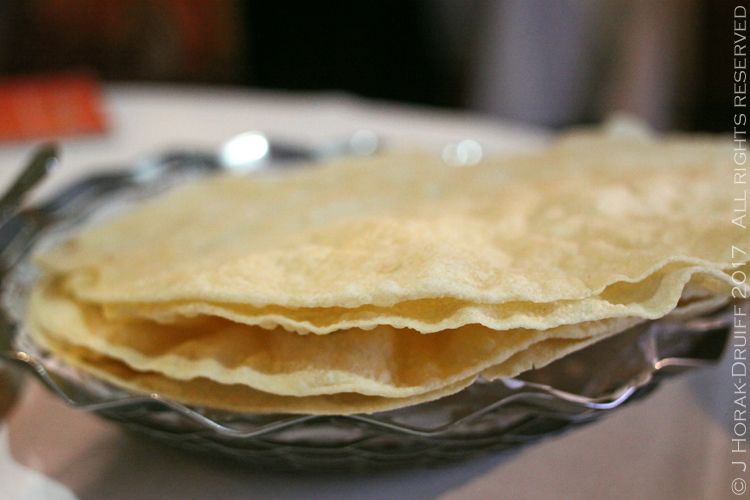 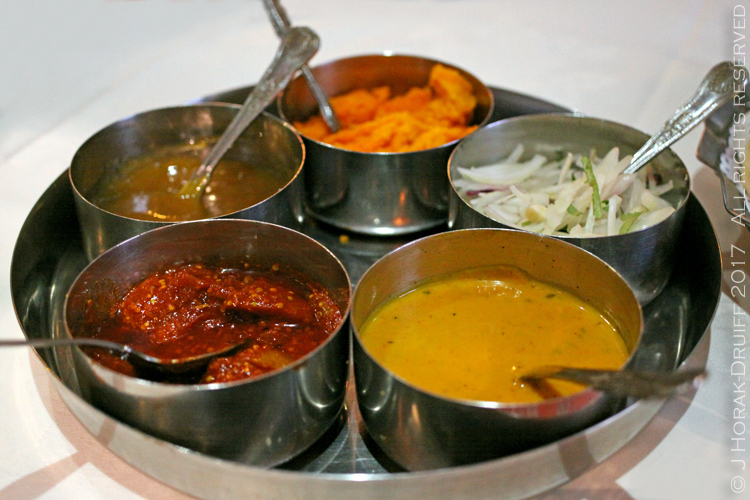 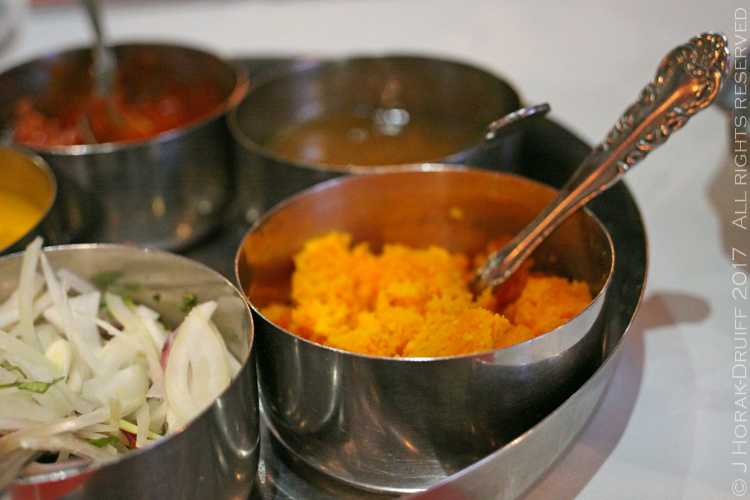 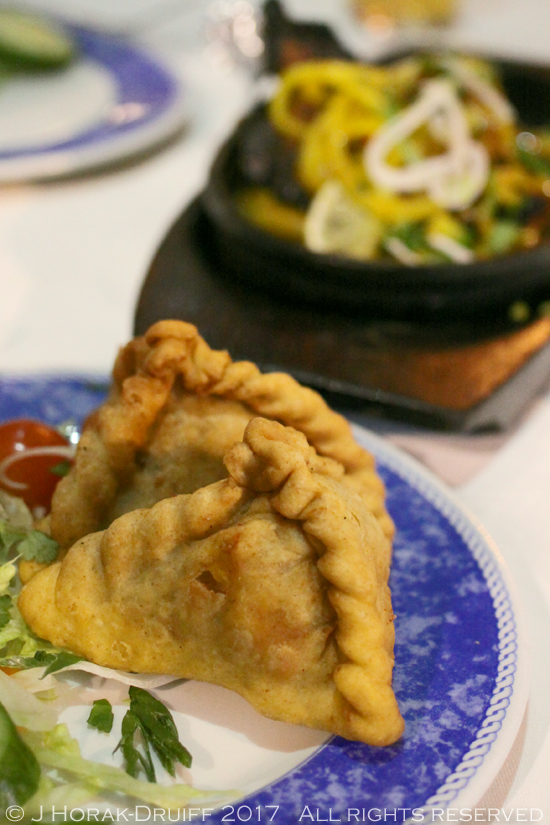 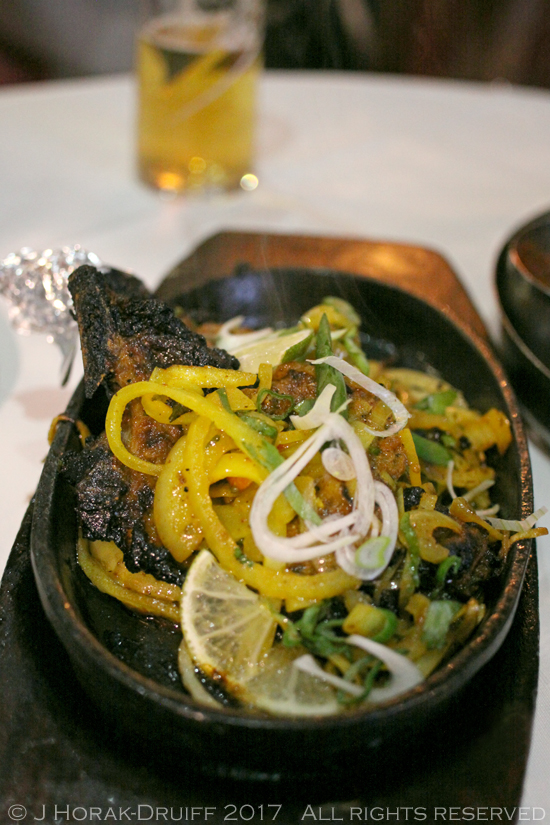 We decided to choose my main course from a list dishes exclusive to City Spice, which are highlighted in a separate section.  My choice was the City Spice Delight (whole spring chicken marinated with a spicy sauce baked in tandoor, stuffed with spinach and paneer  – £12.95) – a dish that turned out to be exceedingly hard to photograph well but was very tasty and generously proportioned! The chicken was fork tender and the sauce creamy and satisfying. My only regret is only finding out afterwards that the dish is available as a spicy and a non-spicy version – next time I would ask for the spicy one.  My companion tried the Bangladesh special thali (£14.95) which included ureebisi biran (flavoured with runner bean seeds), biran maas (fish marinated in Bangladeshi spices), chicken rezala (a hot and creamy Bangladeshi curry), shatkora dal (lentils cooked with Bangladeshi shatkora fruit), pilau rice and fresh paratha – all delicious and also a generous portion. As our eyes were larger than our tummies (!) we also ordered a side of fluffy garlic naan bread (£3.25)and dal masalder (chana, moong and masoor dal cooked together with spice and herbs in ghee – £7.95) – the dal on its own would make a fantastic vegetarian main with the naan bread!. 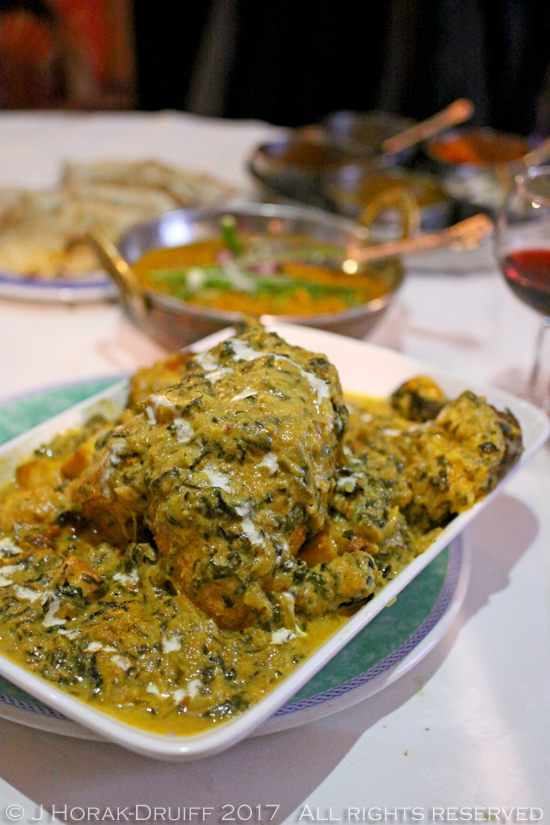 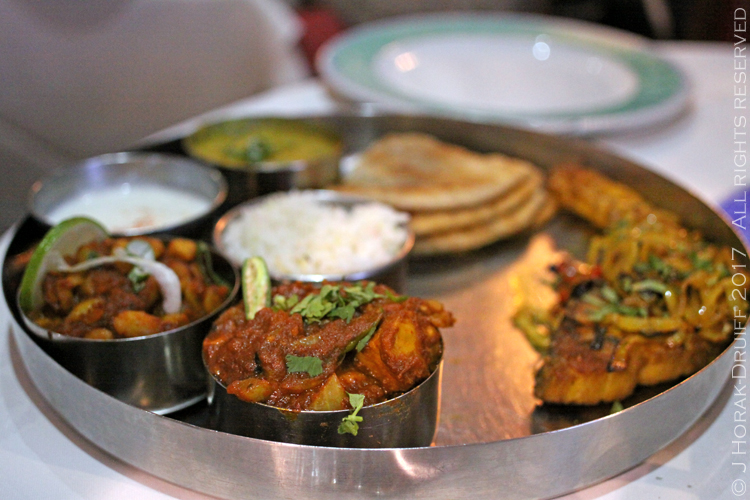 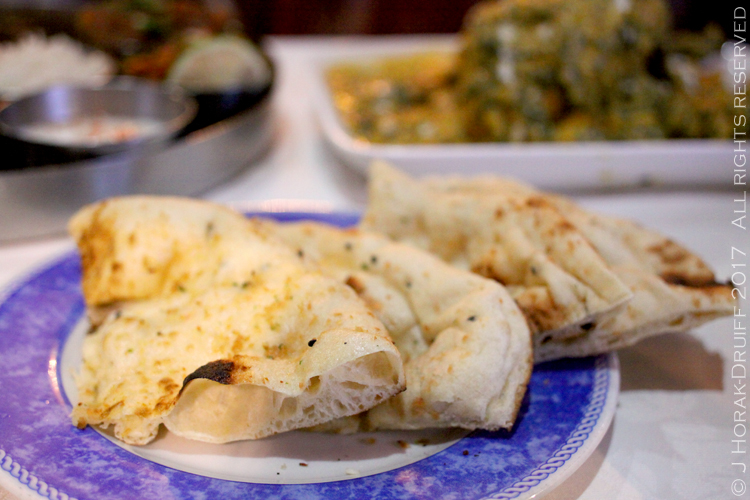 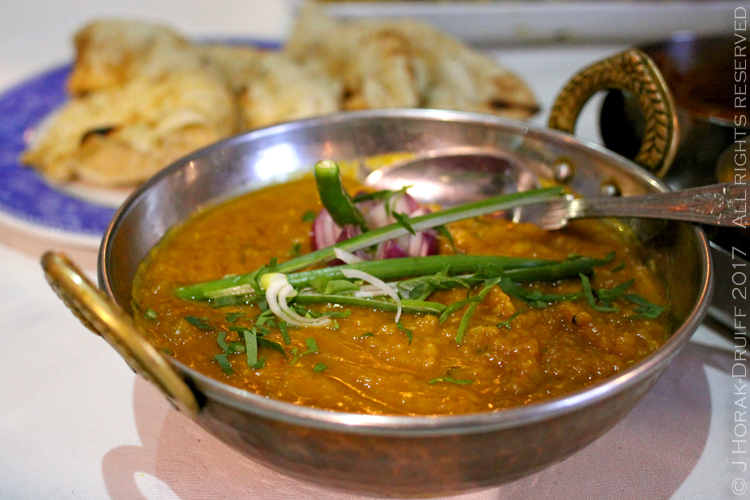 The restaurant is licensed and w enjoyed a pre-dinner whisky and a beer as well a bottle of Rioja with dinner -possibly not a textbook match with spicy food but perfect for a wintry evening and a welcome change from the days when almost none of the restaurants on Brick lane were licensed! Desserts were not a strong point – I had a gritty vanilla ice cream confection in a not-so-crispy chocolate wafer cup – but in the restaurant’s defence they are not made in-house as the owner told me demand for desserts is minimal and therefore not an area they focus their energy on.  My companion fared better though with a decently flavoured mango kulfi, and I was pleasantly surprised to find that they serve irish coffees, which made for a good end to the meal. 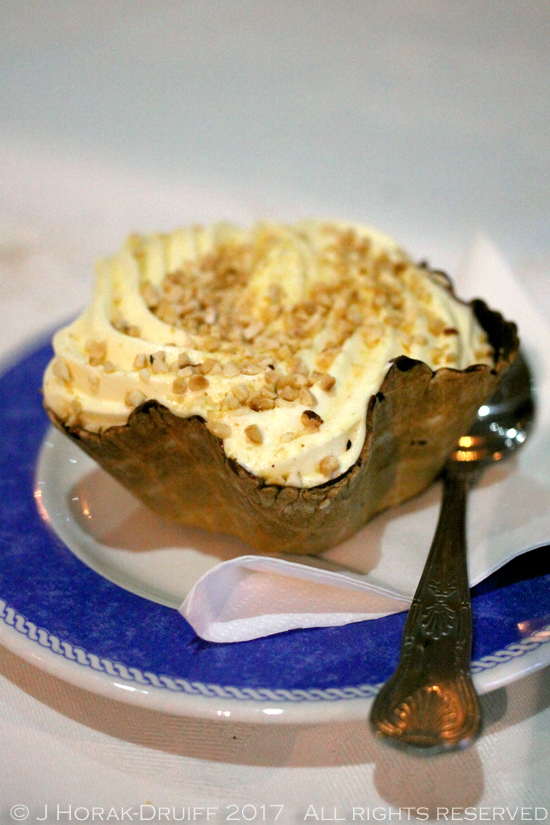 Service was friendly and far more efficient than I have had at most other Brick Lane restaurants – and I think much of this can be attributed to owner Abdul’s watchful eye and hands-on approach.  I liked the menu and the fact that it goes beyond the standard British curry house offering of familiar dishes like chicken tikka masala, lamb rogan josh and chicken jalfrezi and the like – for those curious about traditional Bangladeshi cuisine there is much to explore on the menu and i am certainly keen to return to try a few more of the City Spice specialities. If you have ever wandered up and down Brick Lane not knowing which restaurants are the good ones and which are to be avoided, fret no more: City Spice will satisfy all your needs.

DISCLOSURE:  I enjoyed this meal as a guest of City Spice but received no further remuneration to write this post.  I was not expected to write a positive review – all views are my own and I retain full editorial control.