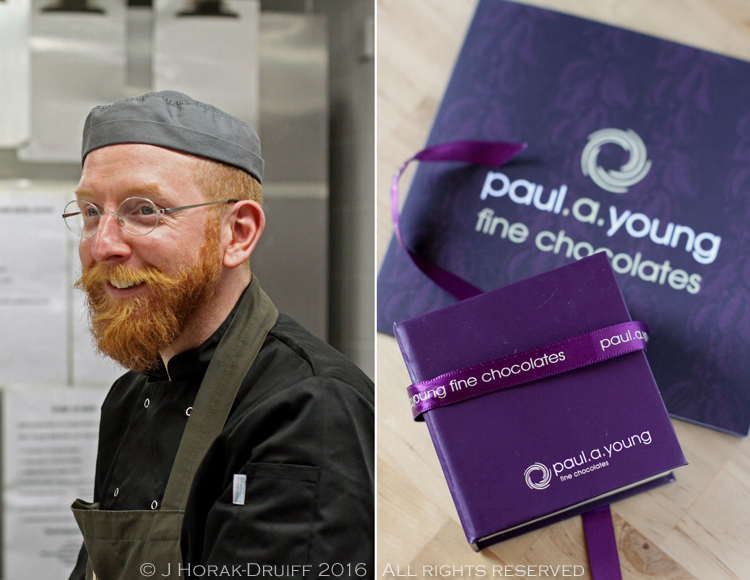 When I first arrived in London back in 2000 I, along with much of London, thought Thornton’s to be an example of a premium chocolatier. Bean-to-bar control over the chocolate-making process; single estate chocolate bars; or dinner party debate about the relative merits of Venezuelan or madagascan cocoa beans were still foreign concepts to almost all of us not working in the chocolate industry. Nobody thought to enquire what percentage of cocoa solids a bar of milk chocolate might contain, and Swiss or Belgian chocolate were still thought of as labels indicating quality. Clearly, we’ve come a long way! Today the average London premium chocolate purchaser is a savvy customer who wants to know whether the cocoa beans were ethically sourced; which country the beans were grown in; and what sort of lecithin is being used to emulsify the chocolate – you need look no further than the uproar caused by the recent Mast Brothers chocolate controversy to see just how far we have come. This level of consumer education and interest is due at least in part to a generation of energetic young British chocolatiers including William Curley, Willie Harcourt-Cooze and Paul A. Young.

Although I had tasted his chocolates before, I first met Paul A. Young in person on the P&O Britannia during her inaugural celebrations last year. We bonded over G&Ts and talk of our respective skiing injuries (as one does!) so I was delighted to hear that he was to host a chocolate masterclass at the Le Cordon Bleu culinary school in London, in association with Great British Chefs. The occasion was partly to mark the ten year anniversary of his first chocolate shop, opened on Camden Passage in Islington in 2006, after having worked as head pastry chef at Quo Vadis and Criterion under Marco-Pierre White.  Known for his innovative, fresh and playful flavour combinations, Paul is the only chocolatier in London working in a truly artisan way. He and his team make all their creations completely by hand in the kitchens at each shop, in small batches and at every stage using fresh ingredients (no compounds, concentrates, essences, preservatives or additives). This means that his chocolates do not have a long shelf life, but it also means that their fresh, clean flavours are experienced by the customer as Paul envisioned them, not as preservatives have dictated. Our evening kicked off with Paul explaining what he was going to make: champagne rhubarb, earl Grey tea ganache, rose and white chocolate. It sounded like a show-stopper – maybe a little intimidating – but Paul assured us that if we tackled each individual component in sequence, there was nothing to worry about. The first step that Paul demonstrated was his water-based ganache.  Anybody who bakes has at some point been told that you should never get water anywhere near melted chocolate because it will seize – in other words clump together in a dull, grainy mass.  But Paul showed us that as long as you add the liquid to solid chocolate, the chocolate emulsifies as it melts and you get a perfectly smooth ganache.  In this case,  he melted a bowl of chocolate pieces by stirring in some hot sweetened Earl Grey tea and whisking vigorously until the chocolate had melted and the mixture emulsified into perfect glossy smoothness.  Who knew!! The ganache was poured into a lined baking tray and popped into the blast chiller while he roasted the rhubarb with vodka and sugar. 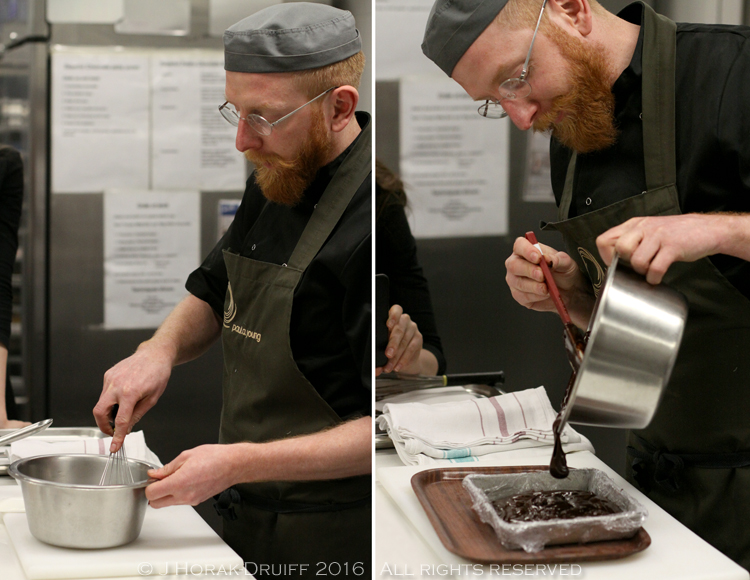 While we waited for the ganache to chill and the rhubarb to roast, paul told us a little about how he got started in the chocolate business and we got to taste some of the chocolates that have won him regular medals at the International Chocolate Awards. First up was the smooth, shiny chocolate dome of his sea salted caramel filled chocolate – dark chocolate filled with rich and properly salty caramel. Good enough to sell your granny for! Next up was the pretty pink grapefruit marmalade martini filled chocolate, full of the bittersweet citrus flavours of pink grapefruit with a little alcoholic kick; and last but not least was the divine Kalamansi lime filled chocolate – like a zestier lime curd stabilised with white chocolate. Each one had such distinct flavours and each was show-stopping. 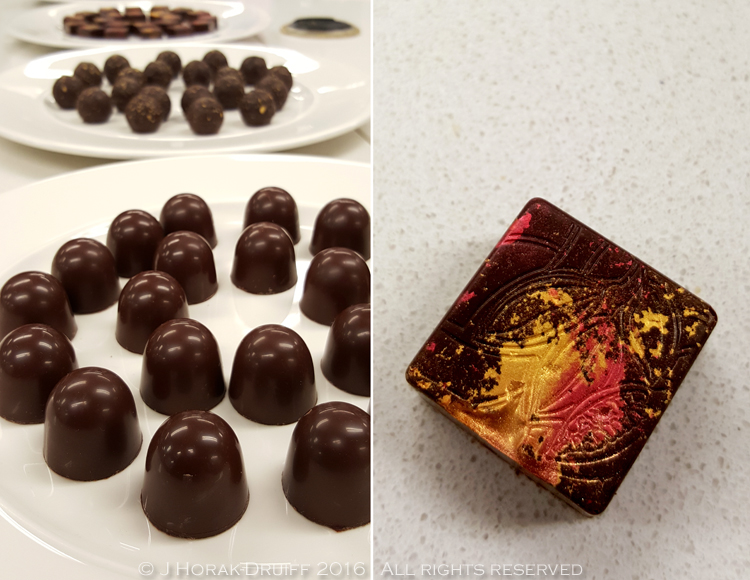 Once the rhubarb was hot and the ganache cold, Paul demonstrated how to cut a block of ganache as wide as the strips of rhubarb pieces; how to lay the rhubarb pieces side by side on the serving plate, and to top them with the ganache slab. On top of that came shavings of Valrhona white chocolate, rose petals, and a syrup made from the rhubarb cooking liquid that had been boiled to reduce it – and voila!  Dessert fit for a king! And just to test that we had been listening, Paul then got us to recreate the dessert on our own.  In the photos below, mine and Sarah’s is on the right with the glass of moscato and Paul’s is on the left – almost indistinguishable! 😉 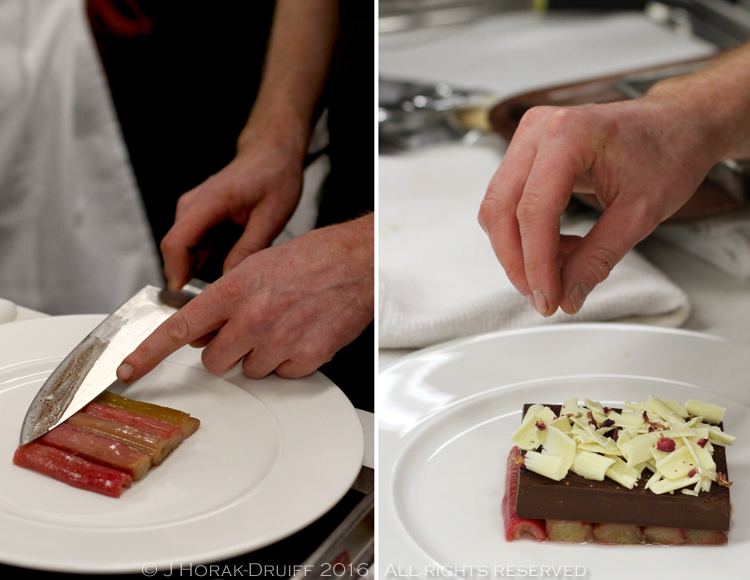 But we weren’t done yet – Master Chef Julie Walsh from Le Cordon Bleu was on hand to show us how to make classic florentines, and it’s easier than you think.  After mixing chopped nuts and dried fruit, she added a mixture of cream, sugar and honey which had been heated until the sugar melted and mixed well.  She spooned this mix into a silicone baking mould with bite-sized cups and baked it for about 40 minutes at 2 different temperatures before allowing them to cool and unmoulding. After tempering chocolate, instead of brushing it onto the base of each florentine, she showed us how to pipe small circles of chocolate onto a silicone mat and then gently pressing each florentine into a blob of chocolate so that the base is fully coated. Once hardened at room temperature, the florentines are ready for eating. 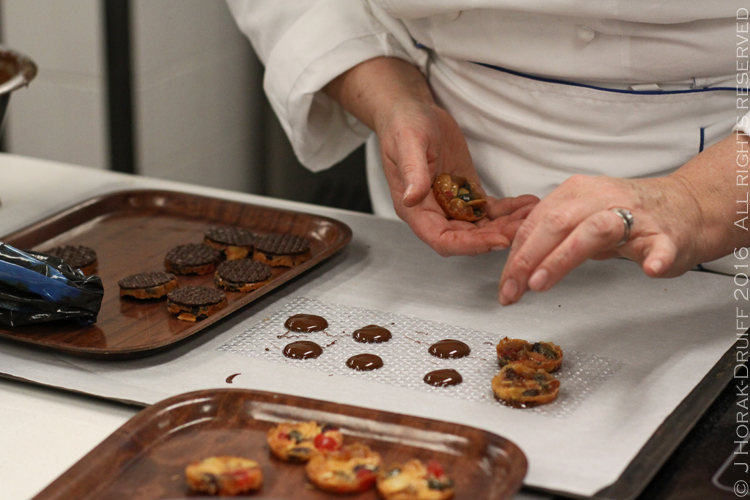 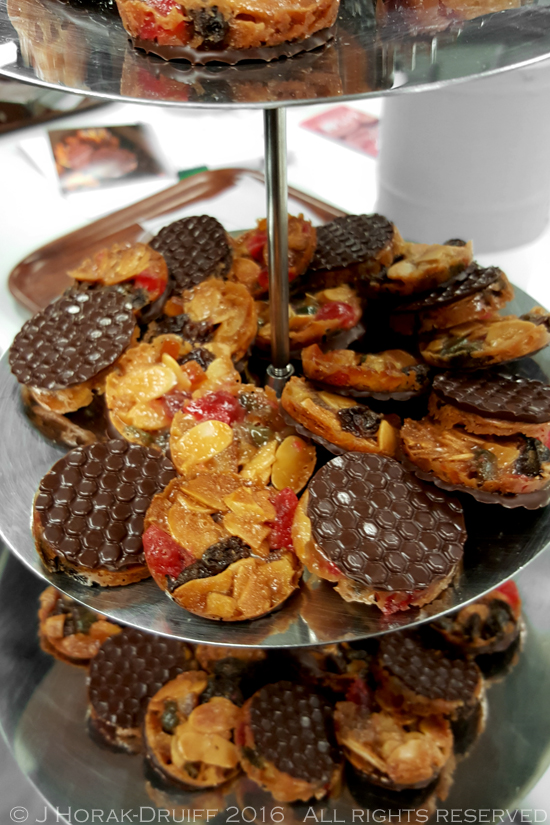 Both Paul and Julie’s extensive knowledge of chocolate and patisserie was evident, as was their pragmatism.  Both were keen to point out that working with chocolate need not he overly complicated – you don’t need to know the crystalline structure of chocolate and you don’t need a tempering machine or loads of special equipment.  Paul especially encouraged us all to get into the kitchen and experiment a little with chocolate because that’s exactly how he got started – and his enthusiasm is definitely infectious. You can find the recipe for Paul’s chocolate and rhubarb creation on the Great British Chefs website, and you will find my two favourite photos of the night below: Me, Urvashi (holding her London Marathon medal!), Judith and Sarah giving it our best Zoolander “Blue Steel” look; and Paul, Sarah and I clearly finding something about the chocolate ganache very, very amusing 😉  Thanks to Great British Chefs, Paul, Julie and Le Cordon Bleu London for an enjoyable and informative evening! DISCLOSURE:  I attended this event as a guest of Great British Chefs but received no further remuneration to write this post.  I was not expected to write a positive review – all views are my own and I retain full editorial control.