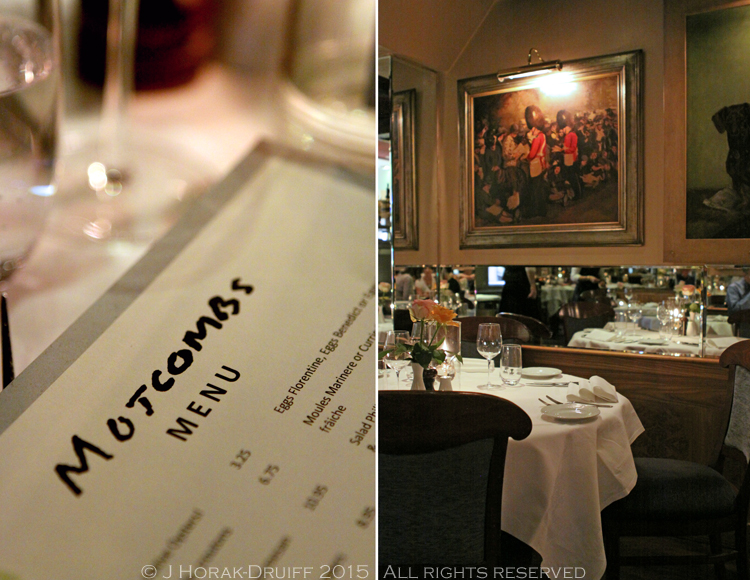 It’s a fickle old place, the London restaurant scene.  One minute you’re the talk of the town – think nouvelle cuisine (or as my father described it, starvation rations plated by an interior decorator), fusion food, sharing plates, artisan pizza, gourmet burgers/hot dogs, and single-food restaurants (roast chicken, breakfast cereal, toast – the list continues to grow). But take heed, those who ride the whirlwind of the culinary trend: today’s hot ticket is tomorrow’s congealed leftovers, leaving in its wake only fading memories of glory, and empty tables. So it’s nice to know that there are some restaurants in London that have sailed serenely on through the sea of fashionable foodie trends, floating among them but not setting course by them; restaurants that still serve proper portions of proper restauranty food of the kind that you grew to love on the rare occasions as a child when you went out for a fancy meal. Motcombs in Belgravia is such a place.

It’s easy to walk right past the entrance to this unassuming Belgravia fixture – my excuse is that I was distracted by the red London phone booth on the pavement right next door – but I soon found my way into the cosy bar area at street level. Above the narrow staircase leading to the basement, a red neon “Restaurant” sign beckons – a deliciously louche touch in a bar that otherwise seems the natural habitat of a more genteel era of diner. Downstairs, the general feeling of a more genteel era continues with white damask tablecloths, fresh flowers on each table, and the owner’s eclectic collection of art on the walls. The restaurant was bought by current owner, restauranteur Philip Lawless, in 1982 and transformed from a café into a restaurant and bar.  The premises have been extended twice and now include a suite of rooms across the road that may be hired for private functions.  Philip (who happened to be dining in the restaurant on the night we visited) says that the Motcombs formula for success has always been to produce good food at a reasonable price and to make the customer feel welcome – and both elements were very much in evidence on the night we visited. The menu reads like a pan-European greatest hits compilation, featuring things like soupe de poisson; eggs Benedict; jamon Iberico with melon; penne a la vodka; lemon sole and chicken Parmigiano.  It’s proper, grown-up food that may not push any trendy buttons but that we all secretly crave each time we are served a plate of foams and gels.

To start, we were advised by out lovely waitress to try the oysters as the season had just begun – so we took her advice and ordered half a dozen award-winning native oysters from the Loch Ryan beds in South West Scotland (£3.25 each).  The Loch Ryan oyster beds date back to 1701 when the Wallace family was granted a Royal Charter on the oyster bed.  The oysters are dredged from the seabed and then resettled in the oyster beds in the loch where they settle and grow. Each day, 40,000 oysters are harvested from the Loch and hand-sorted to obtain just 2,000 marketable oysters that are large enough to sell.  The rest are re-laid in the oyster beds to continue growing until they are large enough to harvest.  As they are slow-growing, by the time you get to eat a Loch Ryan oyster, it it about 8 years old. So how do they taste?  In a word – fabulous! They are plump with an almost crisp bite to them and a pungent, briny flavour that makes the sides of your tongue tingle before leaving you with a nutty aftertaste and a hunger for another. Served with the oyster was a little bowl of tomato and horseradish vinaigrette – and although I am usually a purist about such things and eat my oysters with lemon juice only, I have to say that the vinaigrette was utterly spectacular as an accompaniment. Our other accompaniment was a glass of Sancerre, which was a great match for the shellfish. 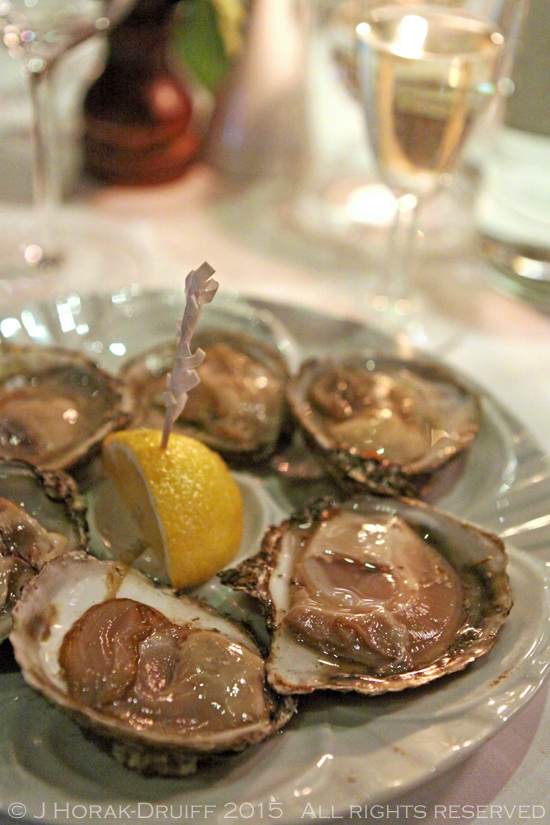 For our main course the waitress pointed out that grouse season has just begun and that we might want to have a roast grouse with all the trimmings (£23.50)– which Alan did. When his plate arrived, I have to admit to a pang of menu envy as it was a thing of great beauty: a perfectly bronzed and glistening whole grouse garnished with bacon rashers and served atop a slice of rich paté and huge fried crouton, with lashings of gravy and bread sauce. But Rosana and I were too smitten with the idea of the lobster linguini (£19.40) to be swayed from our original choice. The linguine portions were enormous – a mound of pasta generously tossed in a tomato and lobster meat sauce – the kind of comfort food that’s I’d eat every night if I had the budget! Sides of tomato and red onion salad as well as rocket and Parmesan salad were both fresh and tasty. The entire selection of main courses has a “hooked on classics” feel to it, but if all dishes measure up to the quality of ours, then it’s easy to see how these dishes became (and remain) classics. 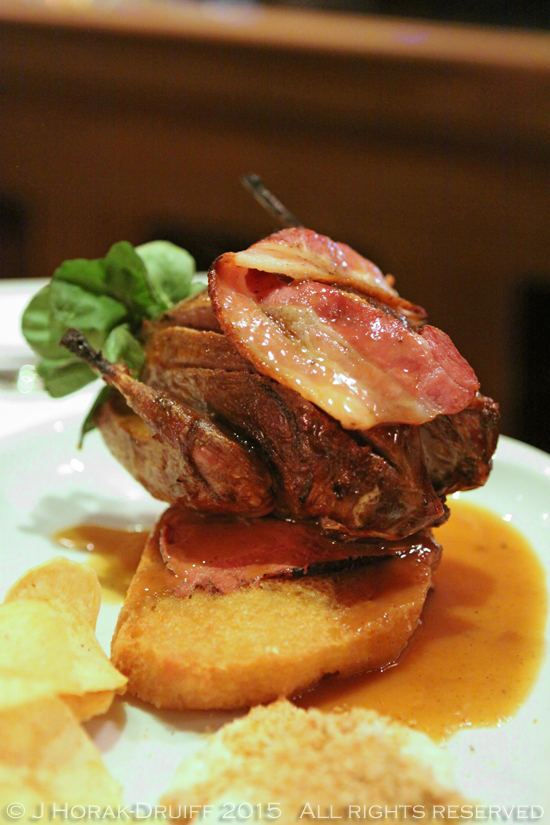 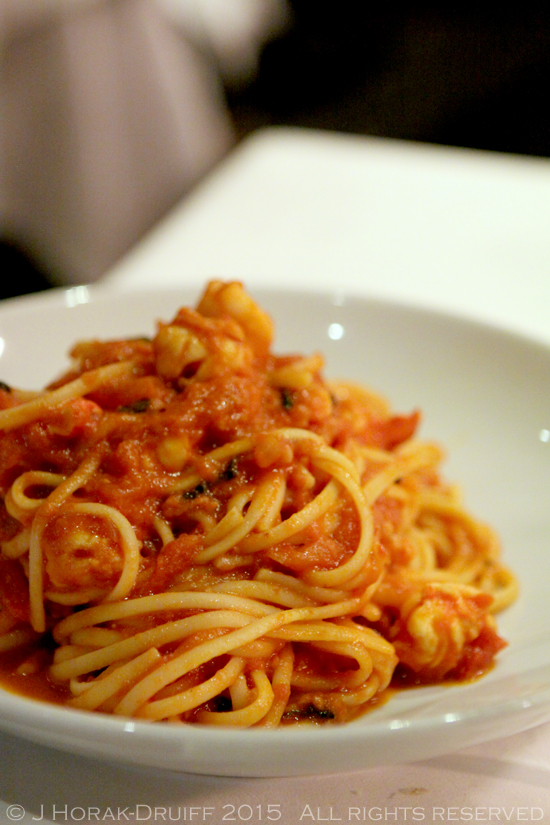 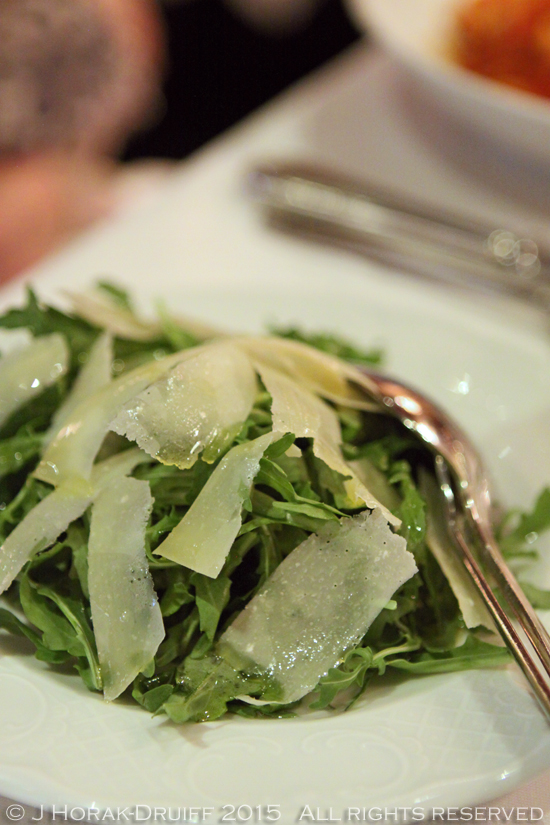 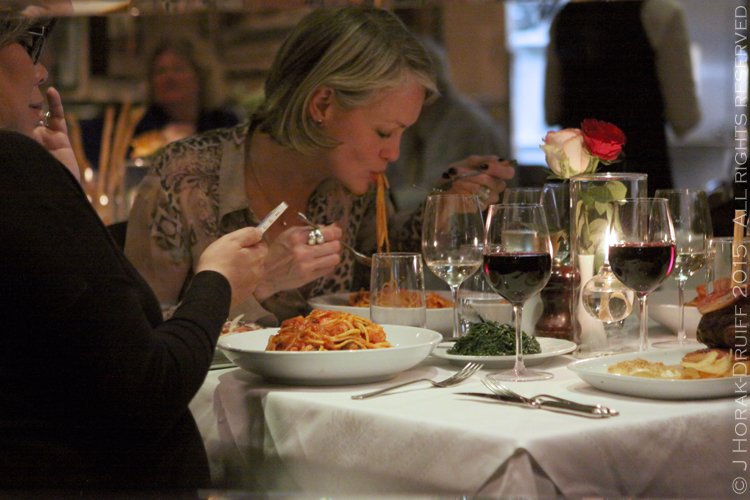 Dessert presented us with another agony of indecision and we ended up each having something different. Rosana chose the pannetone bread and butter pudding with rum ‘n raisin ice-cream (not pictured, £6.35); I chose a selection of ice-creams (pistachio, toffee fudge, and rum ‘n raisin – £6.35); Tracy had the classic tiramisu (£6.35); and Alan chose a winner in the flourless chocolate cake with vanilla ice-cream (£6.35). The bread & butter pudding was surprisingly light, as was the (huge portion of) tiramisu. My ice-creams had a god flavour and texture, particularly the hard-to-get-right pistachio, and I loved the retro wafer stuck into each scoop. But it was Alan’s super-decadent flourless chocolate cake  that had us all groaning with pleasure, particularly the lava-like melt of the vanilla ice-cream. 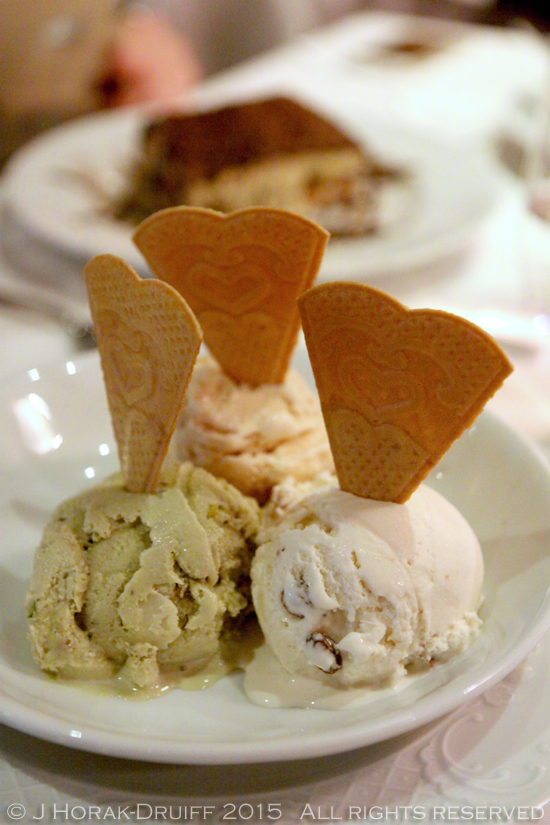 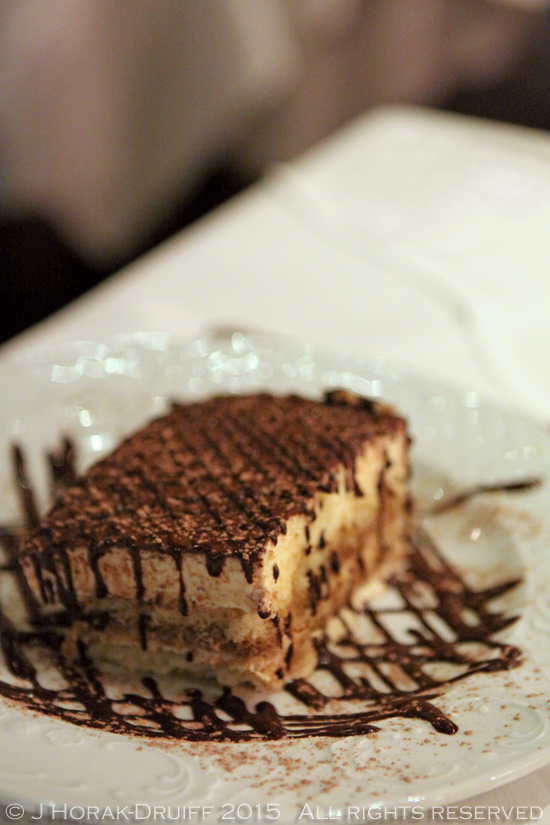 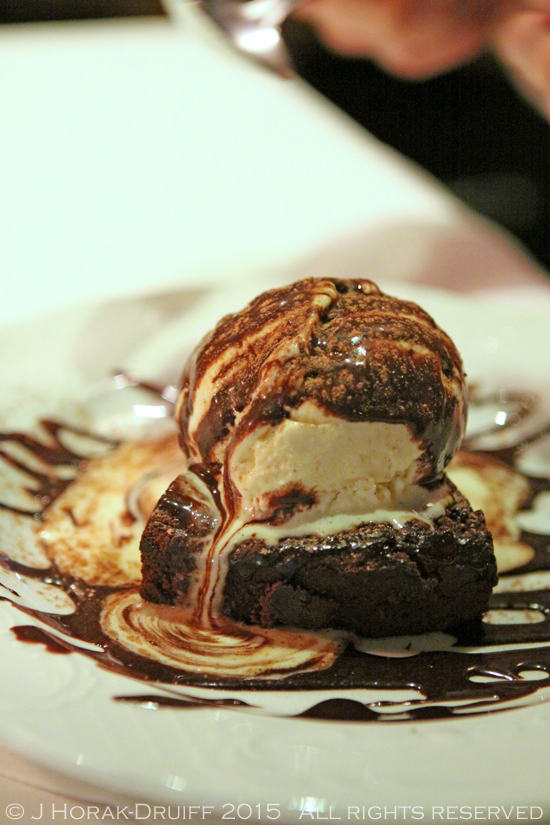 Overall, we had a delightful evening – it’s hard to find fault with anything that Motcombs does. The service was excellent and friendly; the room is inviting and filled with twinkly candles, glittering silverware and fresh flowers; and everything we ate was delicious.  Portions are substantial – this is clearly a place for people who love food, not supermodels who want to push an artfully served piece of lettuce around their plate all night. If I wanted to be churlish (and I don’t), I could say that the menu has not moved on since the early 1980s – but surely that’s part of the charm of the place, serving the kind of dishes we all secretly crave but stopped ordering when high-fashion restaurants stopped serving them. It’s a winning formula that’s been attracting a loyal following for over 30 years – the kind of place you can take an aged aunt or a hot date with equal ease, and both would be equally pleased with their dinner and the restaurant’s old-school ambience.

Motcombs is currently taking part of London Restaurant Festival 2015 (1st – 31st October 2015), during which time you can enjoy 2 courses from a set menu for £15.75 per person.  Every Sunday you can also take advantage of the Sunday roast special – a fore-rib of Scottish beef for 2 people priced at a very reasonable £29.95.

For two other perspectives on our evening, do pop over and read Rosana’s review and Alan’s review.

DISCLOSURE:  I enjoyed this meal as a guest of Motcombs but received no further remuneration to write this post.  I was not expected to write a positive review – all views are my own and I retain full editorial control.

« Behind the scenes at Singapore Airlines: airline meals and crew training
Saturday Snapshots #309 »