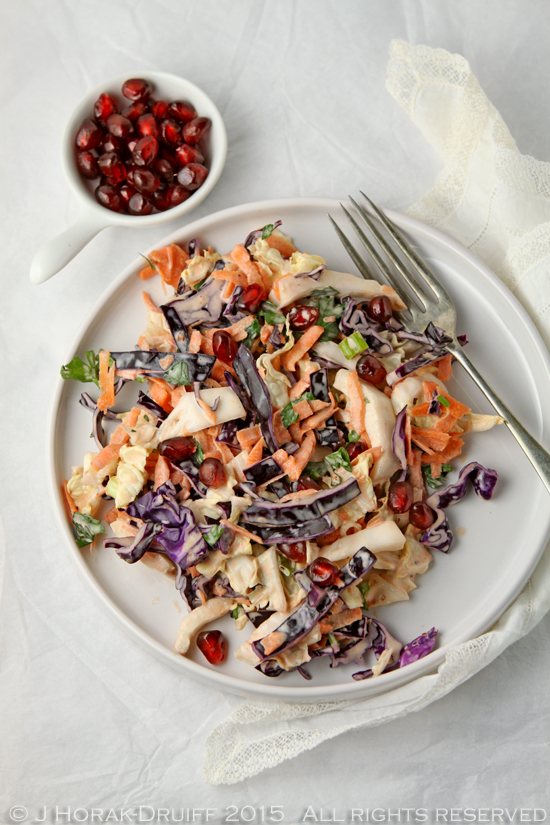 Earlier this year the Oxford English Dictionary released its annual list of new words to be added to this venerable publication.  They were an interesting mix of the familar, the unfamiliar, the  amusing and the rather baffling. Cake pops, freegans, crowdfunding and photobombing are probably well overdue to be added. Jeggings (leggings that look like denim jeans), skort (shorts covered by a flap of material to resemble a skirt) and tenderpreneur (A South Africanism for for a person in government who abuses their power to get government contracts) all made me smile wryly.  And fo’ shizzle makes me despair a little for the future of mankind. But for some language purists, the very idea that new words like these are legitimised by inclusion in the dictionary is a sure sign of the impending Apocalypse.

I always giggle at people who are so protective of a language.  Languages are not carved in stone – if they were, we’d still be speaking Saxon! Languages are living, breathing things that encircle and assimilate new words and bits of other languages like an amoeba assimilates food with its pseudopodia. For heaven’s sake, English is already choc-a-bloc with foreign words! Think of café, déjà vu, schadenfreude, streusel, ballerina, lingua franca, armadillo, cafeteria and guerrilla, all gleefully transplanted into English without so much as a tweaked syllable.  But then there are also the words that we don’t even remember that we borrowed from other languages, so anglicised and assimilated have they become – and Dutch words seem to have been a particularly rich linguistic seam to mine: 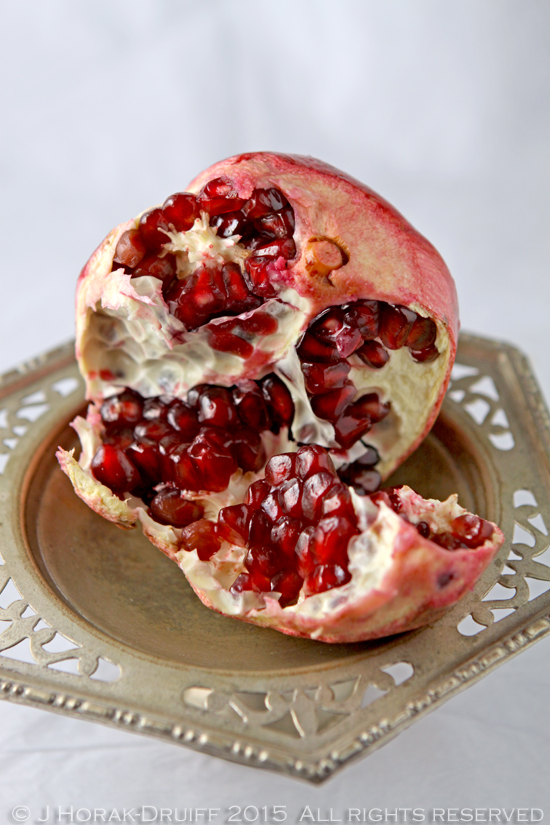 Another of these Dutch borrowings is coleslaw, which is simply an anglicisation of the Dutch word koolsla, or cabbage salad. Coleslaw is one of those salads that seems to have had its heyday in the 1970s and has been slipping in the popularity stakes ever since.  Famous for being the only salad that KFC served for many years, the coleslaw that I grew up on was the mayonnaisey variety where raw shredded cabbage, carrot and onion were doused in so much mayonnaise dressing that it became hard to distinguish the vegetables in the matrix of dressing. Once a stalwart at every barbecue and summer lunch party, coleslaw was slowly but surely superseded by the move to healthier and altogether more glamorous salads, artfully arranged on a serving platter rather than stirred up into a mush in a big bowl. And yet… I retained my fondness for coleslaw.  I’ve always loved cabbage, and the cheerful crunch of coleslaw never fails to please me, even if it’s mass-produced by KFC or doused in a litre of mayonnaise. But how to make other people remember that they love it?  That was the question. Inspiration came unexpectedly from an impromptu dinner out with friends this summer. After a few drinks in the City, we made our way through the hipsters to Dishoom in Shoreditch and enjoyed one of the most satisfying meals I have had I London in ages.  It was hard to decide what I enjoyed the most (although the lamb raan bun is a strong contender!) but the dish that stuck in my mind the longest was a spicy coleslaw dotted with pomegranate seeds.  And so I set about creating something similar at home, riffing on the traditional flavours of coleslaw but with a twist. White cabbage is fine as far as it goes, but I wanted my slaw to be ablaze with colour so it’s a mix of red and white coleslaw together with cheerful orange carrots. Although raw onion is usually included, I find its flavour too harsh and so I substituted spring onions and added parsley to freshen the palate.  Having previously expressed my deep love for mayonnaise, it will not surprise you to learn that I refused to ditch the mayo, but I thinned it with milk and added a good dollop of harissa paste to offset the sweetness of the pomegranate.  There’s enough tradition to please the purists but enough innovation to pique the curiosity of a new audience – and enough deliciousness for everybody. 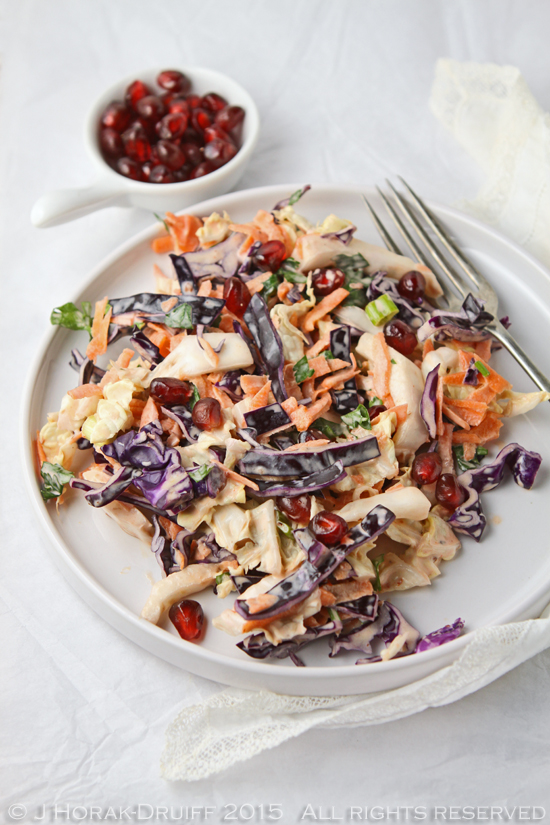 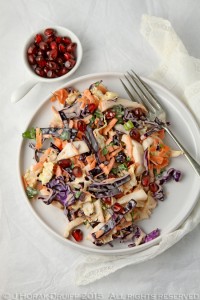 If you love slaw, you should check out Ren’s  Polish carrot and apple salad, Katie’s vegetarian burgers with crunchy slaw, Kellie’s winter slaw with pears and cranberries,  or Kalyn’s spicy cilantro peanut slaw.

If you enjoyed this recipe you might also want to have a look at my other recipes.