Click on Marcus Wareing’s entry in Wikipedia and it reads like London restaurant-themed miniseries.  There are restaurant openings, restaurant closures, legal battles, celebrity chef appearances, television appearances,  long-standing feuds (with Gordon Ramsay, no less) and a flurry of Michelin stars.  In fact, move over The 100 Foot Journey – this is a racy foodie movie waiting to happen. You’d think that with all these distractions going on, the food might be playing a supporting role – but you’d be wrong.  Testimony to just how seriously he takes food is the fact that Wareing still holds two Michelin stars at Marcus at the Berkley Hotel, but in recent years he has also branched out into less formal dining venues including the Gilbert Scott at the St Pancras Renaissance Hotel and most recently, Tredwell’s in Covent Garden’s Seven Dials.

Named after the butler in Agatha Christie’s The Seven Dials Mystery, Tredwells is spread across three floors, with a bar area on the ground floor and restaurant seating in the basement and on the first floor.  Although he was involved in the menu, Wareing himself is not in the kitchen here – he leaves the cooking to accomplished head chef Andrew Ward – and the food is described as “modern London cooking with an emphasis on sharing”.  As you enter, you are greeted by the impressive sight of a massive clock face made entirely of vintage cutlery, mounted on the double-height wall between the ground and first floors.  The room is dark and masculine, all exposed brickwork and filament bulbs, and I found the staff to be impressively friendly and helpful. Having settled ourselves at our upstairs table, we had a visit from the barman to talk us through the cocktail menu.  In the end we settled on Down The Apples & Pears, a delightfully subtle combination of Belvedere vodka, apple juice, pear juice, elderflower and thyme.  It was just how I like a cocktail to be – fruity and aromatic, without being too sweet, and I loved that the thyme came in the form of a whiff from the sprig atop the glass each time you sipped, rather than a mouthful of thyme. 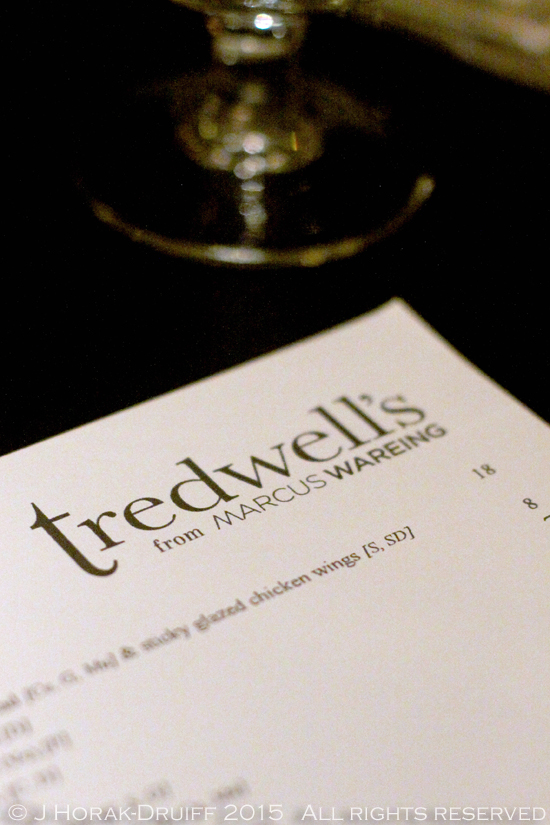 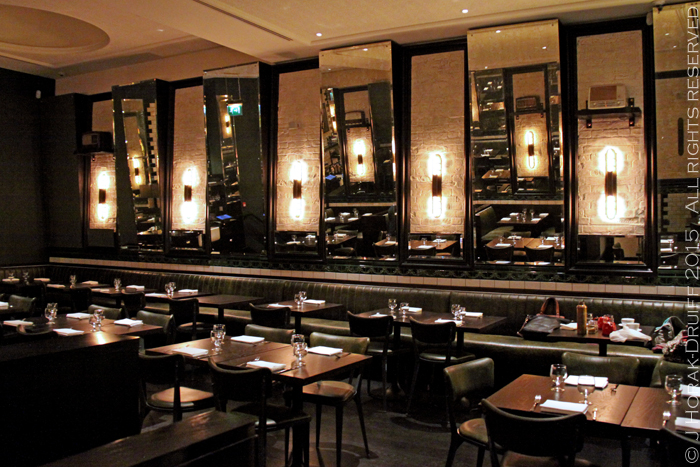 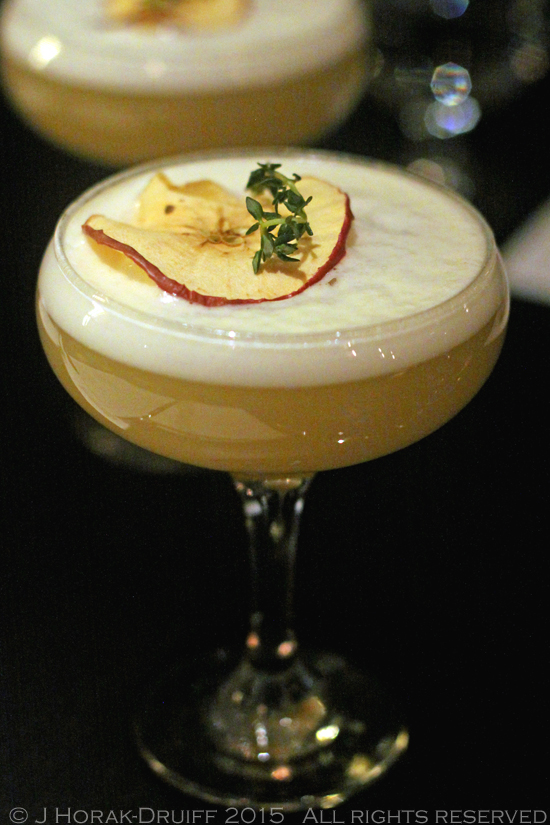 Our next challenge was to choose our food from a menu where everything sounds delicious, and where almost any food allergy is catered for.  There is a massively expanded key to allergens at the back of the menu, which makes a welcome change from restaurants where one still struggles to get accurate information on whether a dish contains nuts/gluten/dairy.  In the end I chose the confit salmon with cauliflower couscous, bonito flakes and coriander (£8.00) while Rosana had the prawns, white polenta and roasted garlic in chicken broth (£9.50). Rosana’s dish was pure decadent comfort food, with a mound of fluffy polenta under a generous helping of plump prawns. My dish was OK, if not stellar.  The salmon itself was just fabulous: succulent, pink and flaking; and the bright freshness of the coriander leaves was a delight – but I was not convinced by serving it all in an (admittedly tasty) broth which left the very-of-the-moment cauliflower couscous floating on top like debris from a shipwreck. 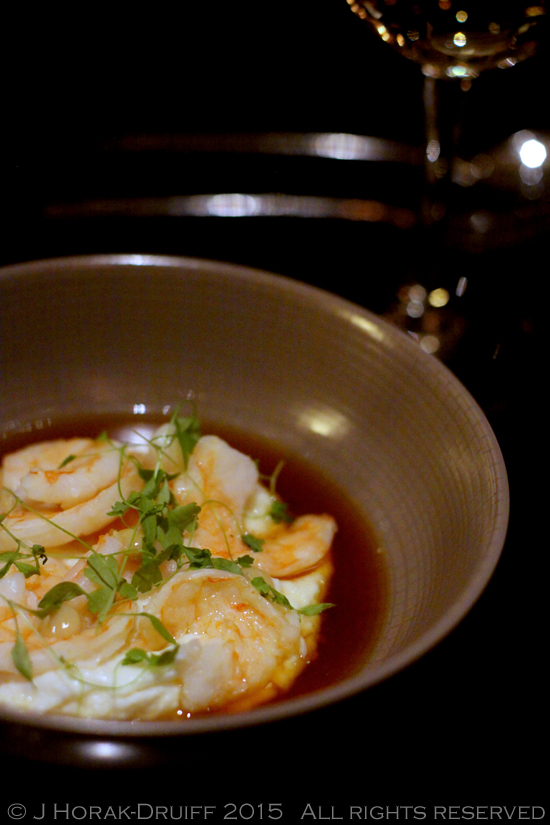 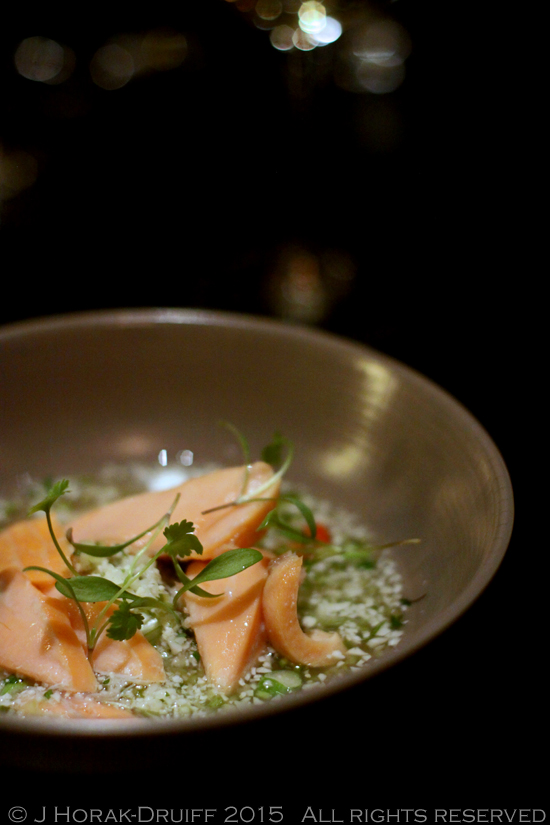 All was forgiven when my main course arrived though:  a spectacularly Flintstones-esque Rhug Estate smoked slow cooked beef short rib (£29.00), simply served with its own jus.  This was just spectacular – smoky, fork-tender and deeply flavoursome as only beef on the bone can be.  Paired with some extraordinarly good polenta chips (crisp exterior, fluffy interior, perfect!), this kept me very happy indeed.  Rosana was also happy with her slow-cooked pork belly and check with juniper and fennel (£16.00), although if you are expecting cracking, look elsewhere – this has not been crisped up in the pan after slow-cooking.  We also shared some sprouting broccoli with toasted almonds, which were pleasant. 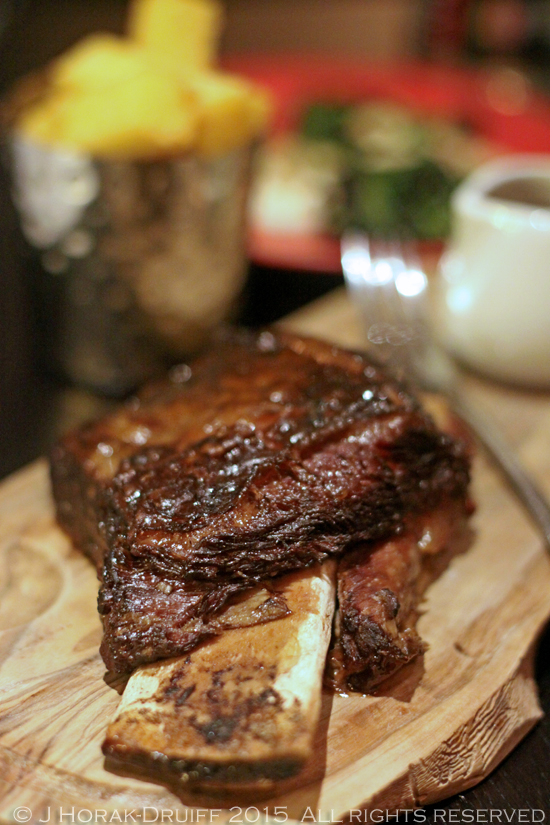 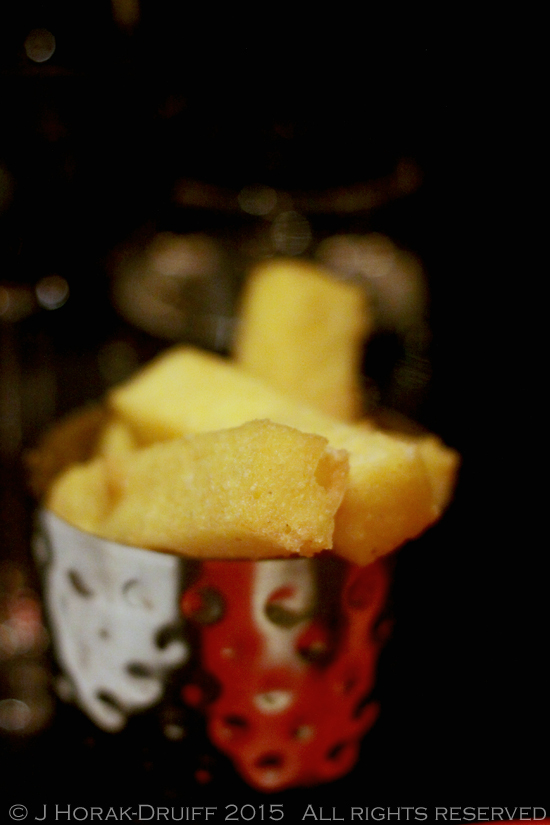 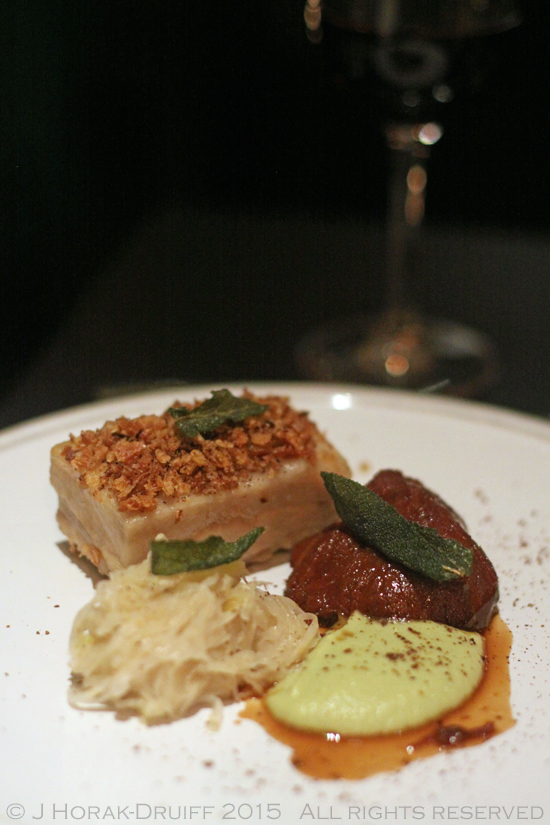 The highlight of the meal for me was dessert – which is saying a lot as I am not generally a dessert person. We ordered two desserts to share, and the waiter suggested we try a third – their homemade “virtuous” chocolate brownie (£5.00) containing no wheat, dairy, eggs or refined sugar .  Sounds like no fun at all?  Well, prepare to be surprised. This arrived as a seriously dense, rich and cocoa-y slice with a blob of moreish coconut yogurt that surprised us both with its deliciousness and lack of discernible virtue. I do think, though, that would be even better received if it were called a chocolate slice or similar because a brownie it ain’t! But a good alternative for those on special diets, it certainly is. Our two chosen desserts were both glorious.  Chocolate cornflakes (£6.00)consisted of crumbled chocolate cake/brownies, chocolate-coated cornflakes and salted caramel sauce -it was like every childhood dessert dream fulfilled and packed with sweetness, saltiness, softness and crunch. Bliss.  But the total highlight was the house-made salted caramel soft-serve with honeycomb (£5.00), served in a cup as if you were at a proper ice-cream shop.  The ice-cream has a deep, rich flavour of caramel as well as a proper salty kick (something that I often find lacking in “salted” caramel desserts) – and the wonderful crunch of honeycomb completed the nostalgic mouthful of childhood. One of the best desserts I have had in ages.  And because I don’t think a meal is complete unless it ends with a sneaky espresso,  that was my final order of the night.  It was served, to our delight, with a generous jar of house-made fudge and some bamboo skewers to spear the rich, dense little squares. 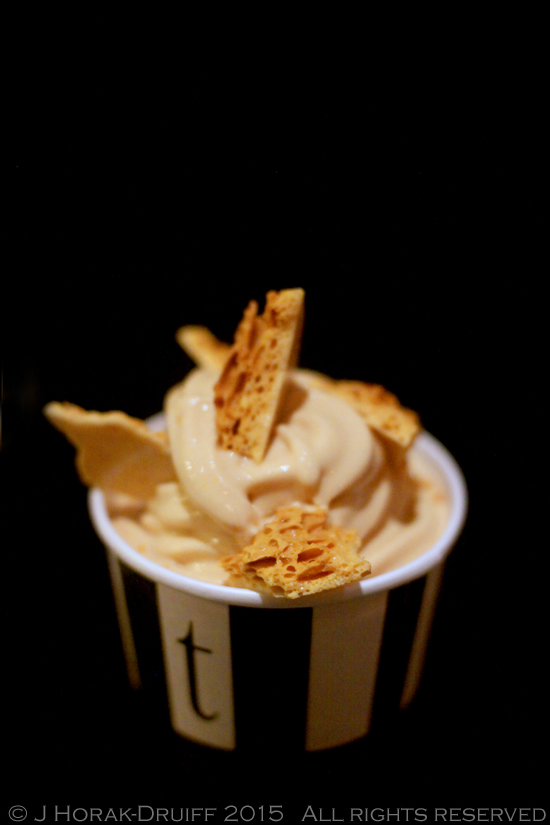 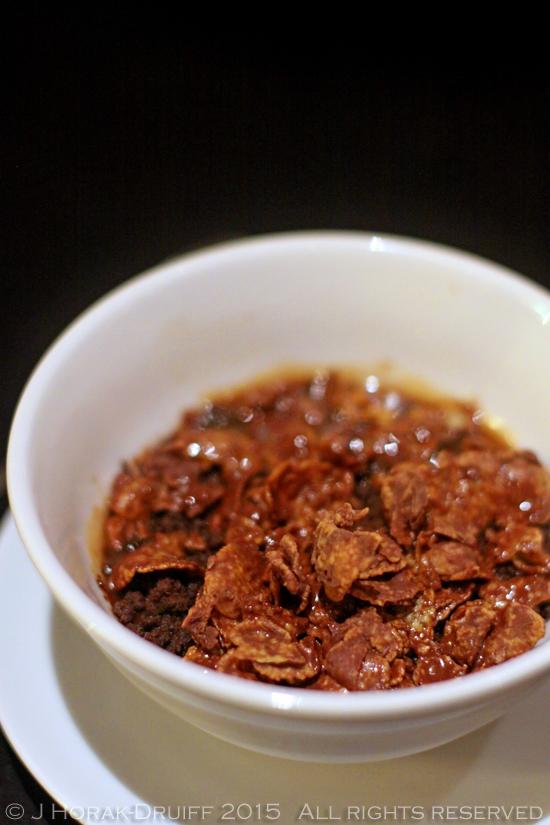 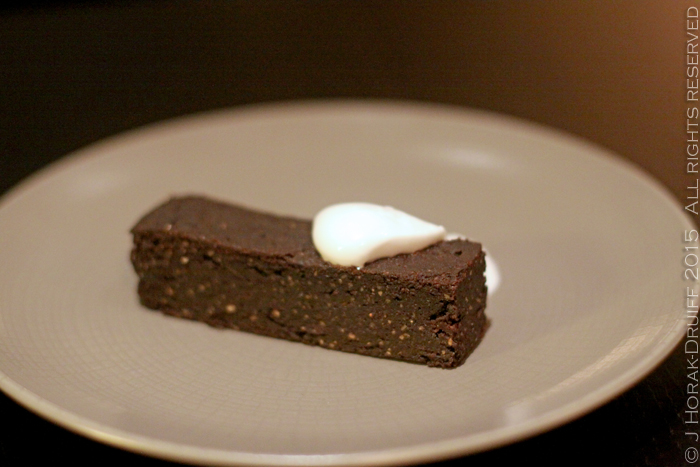 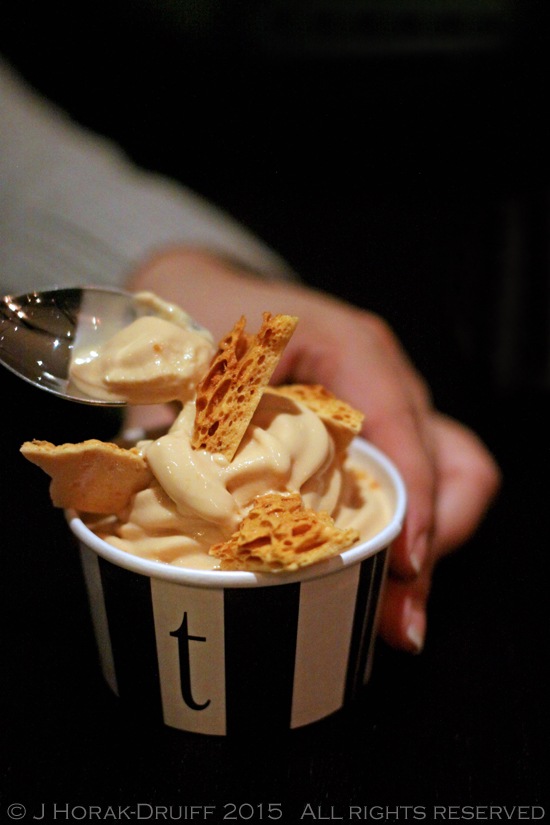 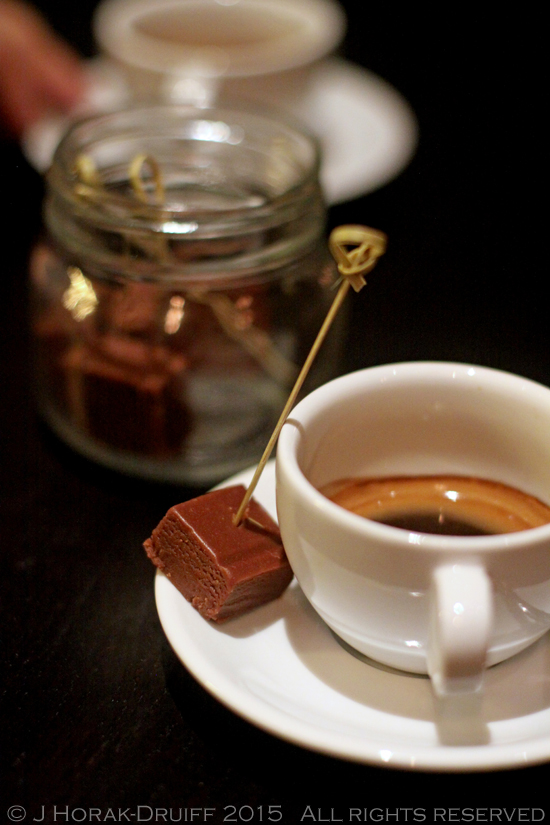 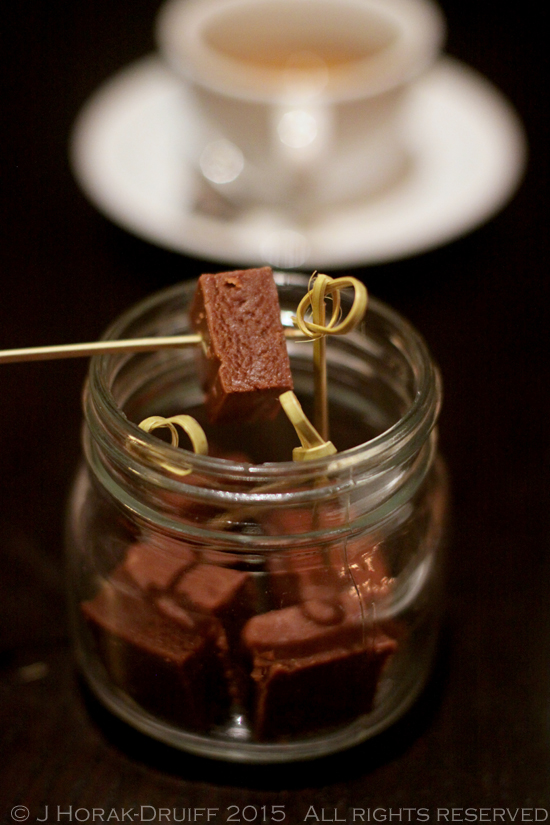 The verdict? Despite some of the dishes being pleasant rather than memorable (the pork belly, the confit salmon), on balance there was a lot to like about Tredwell’s.  The staff were all excellent – very friendly and attentive, as well as knowledgeable, especially the uber-cool barman on the night we visited.  If you have food intolerances you are going to love the extensive information on allergens contained in the menu.   And of course those desserts… both the cornflakes and *that* soft-serve were the kind of desserts you dream about for months afterwards – so much so that I made a beeline for Tredwell’s at the recent Taste of London, just to have another of their soft-serves.  And if that isn’t an endorsement, I don’t know what is.

DISCLOSURE:  I enjoyed this meal as a guest of Tredwell’s but received no further remuneration to write this post.  I was not expected to write a positive review – all views are my own and I retain full editorial control.