You are here: Home / Restaurants / Pop-ups and supperclubs / A Meat Porter supperclub with Simon Hulstone Everybody always tells you what a dynamic and fast-changing city London is – but I often think that in some ways it is quite the opposite.  Walk around some of the elegant streets of west London, screw up your eyes, and you can almost see blokes in top hats and canes hailing horse-drawn carriages.  But for the presence of cars (and the ever-present drone of planes heading into and out of Heathrow airport), some streets have remained unchanged for a century, as has the essential character of the area. But hop on the Tube and head east and you will see what change is all about.  London’s docklands, once the heart of a thriving shipping industry, have experienced upheaval quite unlike any other part of London over the past century.  First came World War II when the docks were identified as a strategic target and they, together with the residential areas around them, suffered disproportionate and catastrophic damage in German bombing raids. But after the war, things were rebuilt and the docks once again prospered.  But once container ships came on the scene and revolutionised shipping, the docks were no longer profitable and the Port of London Authority decided to invest in Tilbury rather than the upstream docks.  The closure of the Royal Docks in 1981 must have had a catastrophic social effect as least as devastating as the wartime bombs.

But London has a way of picking itself up and dusting itself off, and in the mid 1990s investment slowly started flowing into Canary Wharf and trickling eastwards. New houses (including mine) were built, the massive Westfield Stratford City arose from the dust, and even the 2012 London Olympics found a home in the east. I have only lived here for 15 years but have already seen mind-boggling changes, and don’t think I’d choose to live anywhere else.  My commute takes me through Canning Town station every day and I remember when we first got here, having glimpses from the DLR train into the working factory that occupied the Leamouth Peninsula, and wondering what they made there.  A few years passed, and the factory closed.  Another few passed and they broke it down entirely.  And then one day, there were cranes and construction workers on site.  They were building… but what were they building?  I recently had a chance to find out when I was invited to a supperclub in the rapidly arising City Island development, a 12 acre site on the Leamouth Peninsula, adjacent to Trinity Buoy Wharf and connected to Canning Town station by a footbridge.  This car-free development due for completion in 2016 will contain apartments, shops, green space and other amenities, and will be the new home of English National Ballet’s new home.  (Their multi-storey building will have rehearsal spaces with translucent walls so that residents will be able to see the dancers perfecting their craft, in silhouette.) All residents will be members of the exclusive City Island Arts Club which includes a clubhouse, concierge, gymnasium, spa & treatment rooms,  screening room, swimming pools and grocer’s shop, which is where we dined. 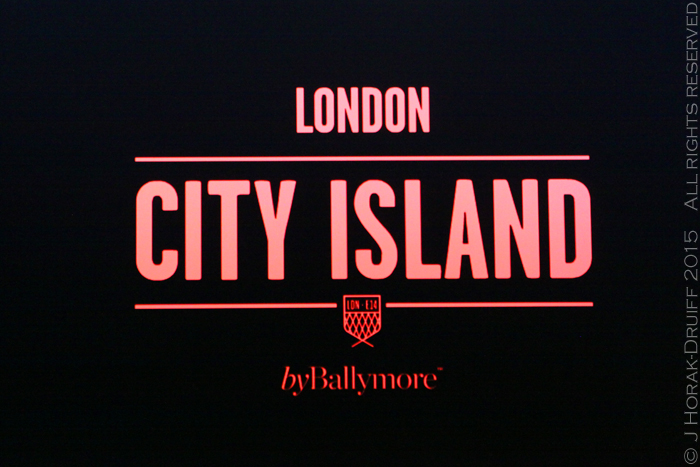 Our host for the evening was Stefan Porter, founder of Market Porter and its first project Meat Porter, an online quality meat delivery company. Meat Porter seeks to source traditional, artisan cuts from British free-range producers who have won acclaim supplying chefs at the nation’s leading fine-dining restaurants, including some with Michelin stars, and making these available to online shoppers. Meat Porter have opted for quality over quantity with a tightly focused product range, reflecting seasonality and the availability of the finest products throughout the year.  Their aim is to supply meat of a quality comparable to top restaurants,  at a price comparable to (often inferior) supermarket meat.  Customers can either build their own custom box of meat, or choose the “surprise me” option – and both will be delivered in London on the day after delivery.  Our chef for the evening was Simon Hulstone, who runs a Michelin-starred restaurant called The Elephant Brasserie in Torquay. Hulstone, the son of a chef, was a Roux Scholar, Knorr National Chef of the Year, World Junior Chef and UK’s Bocuse d’Or candidate by the time he was 33, so obviously a man who knows his meat – who better to showcase Meat Porter’s product range? 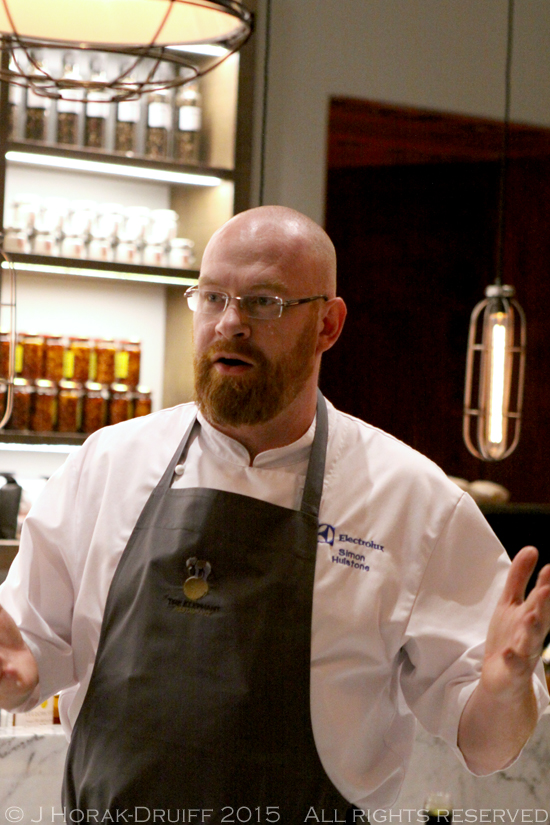 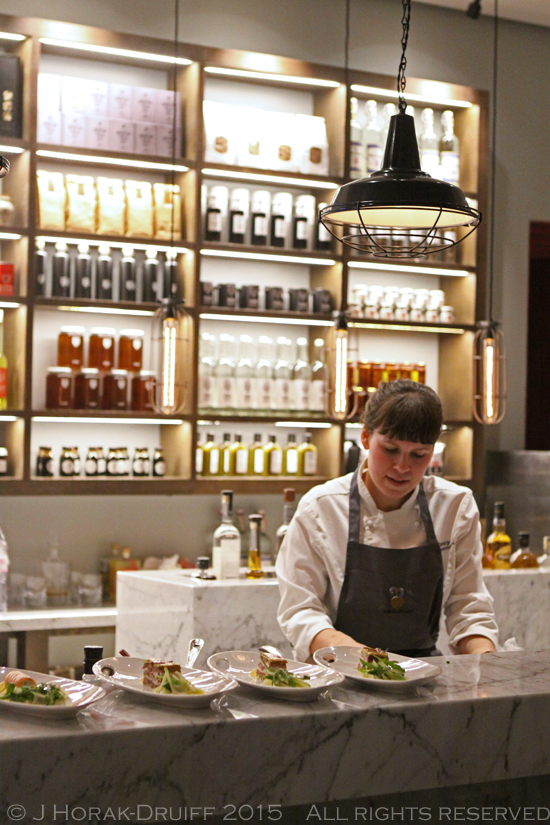 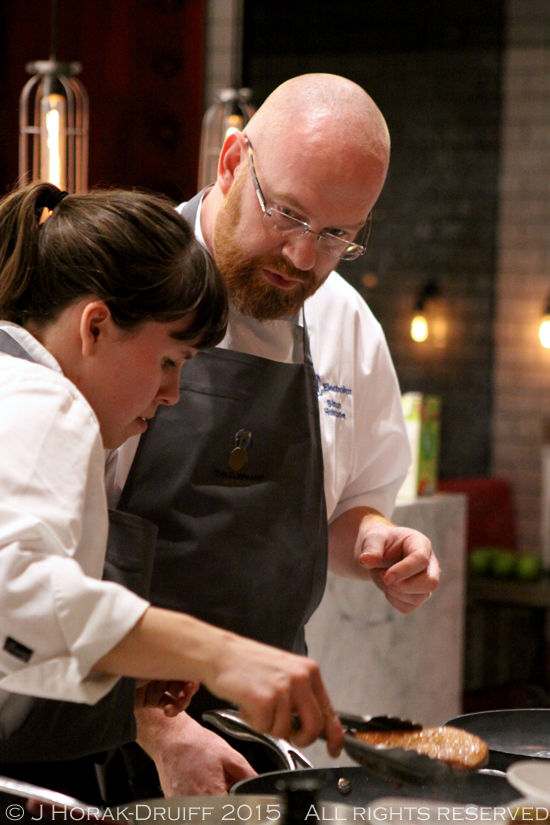 After we had been shown around the City Island showflat and met our fellow diners, we sat down to enjoy our dinner.  We started with an amuse bouche that instantly had the table in silence as we savoured every last drop: salted toffee and spring pea soup with smoked bacon.  It’s hard to stop myself listing a long string of superlatives to describe this little bowl of heaven – think a fresh and light pea soup which hides at its base a kick of sweet-salty-caramelly bacon bits.   It was rather like finding out your prudish piano teacher wears red suspenders! I could have eaten a gallon of this.   Up next was the dish we had been watching Simon plate in the kitchen: compression of Tamworth pork belly and Drummond chicken, caramelised apple, cider gel, baby leeks and pickled baby onions.  This was a terrine of shredded slow-cooked pork belly, layered with chicken and topped with wafer-thin slices of apple that had been coated in a crisp sugar caramel.  Not only was it a delight to behold but it was also fabulous to eat and I loved Simon’s riff on the traditional combination of pork and apple flavours,  both with the topping and the cider gel. Another winner. The main course took the form of breast of Aylesbury duck, Jerusalem artichoke puree, star anise and duck fat confit heritage carrots with watercress and spiced honey jus.  I loved both the earthiness of this dish (supplied by the Jerusalem artichoke puree and the gorgeous purple carrots) and the hint of Asian flavours provided by the star anise and the spiced jus.  Sweetish Asian flavours are a particularly good match for duck and they certainly worked here on this gorgeously plump and juicy duck breast.  I won’t lie to you – when I saw that dessert was going to be rice pudding, I was just the teensiest bit disappointed.  Rice pudding has never been a favourite of mine, and it seemed a rather heavy end to the meal.  But I had underestimated what Simon can do, even in dishe with no meat involved:  the warm vanilla rice pudding, Yorkshire rhubarb in various guises with white chocolate and sorrel.  This was as good as rice pudding gets, with the creamy vanilla of the rice offset by the tartness of rhubarb gel, poached rhubarb and rhubarb crisp; which tartness was in turn balanced by the sweet mini meringues and white chocolate – a glorious exercise in balance.  The evening left me with a burning desire to visit Torquay and Simon’s restaurant! 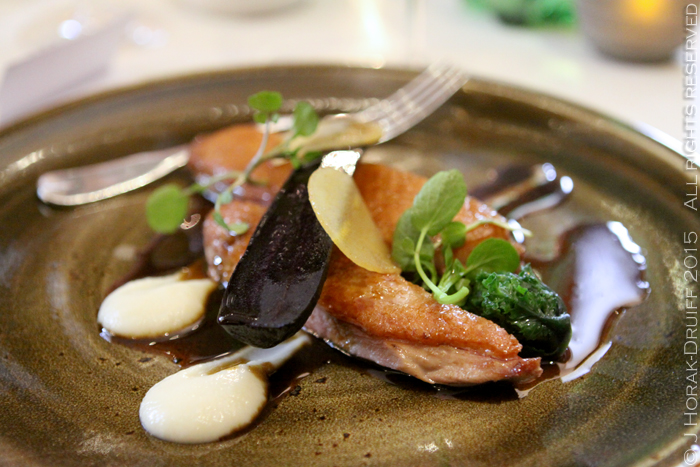 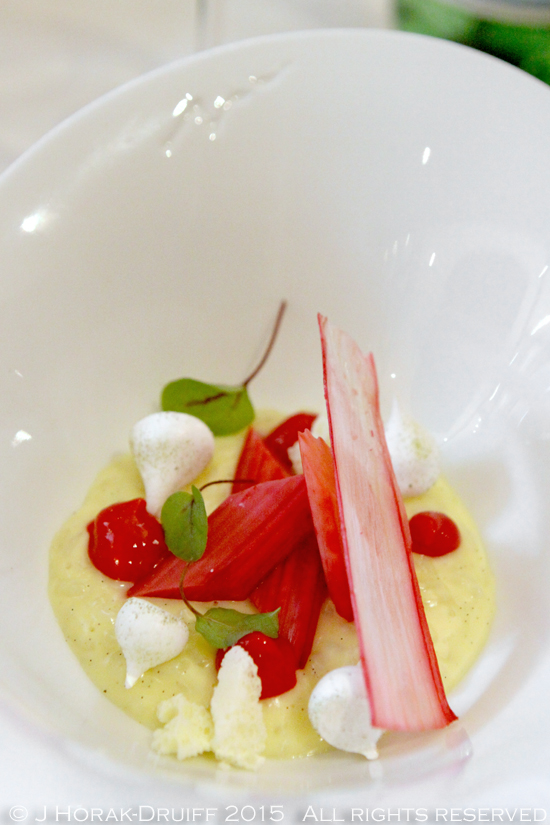 Having achieved success with their meat delivery business, Market Porter now want to branch out into Cheese Porter, doing the same for artisanal British cheeses as they have already done for meat. They are currently running a crowdfunding initiative which allows consumers to invest in and support the company’s development in return for meat parcels and a promised potential return on investment of up to 10% – get on board while you can!

DISCLOSURE:  I enjoyed this meal as a guest of Meat Porter but received no further remuneration to write this post.  I was not required to write a positive review and all opinions are my own.