When I was still a teenager, the Pet Shop Boys famously sang about East end boys and West end girls.  I had never been to London and I had no idea what the difference might be (other than that they clearly came from opposing compass points!) but I certainly got the sense that the West end girls were the too-cool-for-school crowd.  I was also sure that if I ever got to live in London one day (dreamy dreams), I would definitely want to be a West end girl.  But as we know, life is what happens while you are making other plans, and here I am today – living in London fourteen years now but as resolutely an East end girl as you could wish to find. It’s not quite as bad as feeling I need my passport once the westbound Central Line train pulls out of Liverpool Street station, but it’s close.  So as you can imagine, I need a pretty good reason to be enticed to trek all the way out to SW6!

Such a reason presented itself recently when my friend Giula invited me and a few other bloggers to a dinner to showcase some of the new menu items at The Imperial.  Located in an elegant Victorian building on a corner of King’s Road, The Imperial was formerly a pub known as the Imperial Arms, beloved of Chelsea football fans. But in 2013 it was bought by new owners Alan Turtill and Kate MacWhirter, who completely refurbished and modernised the premises and relaunched it as a restaurant with a bar rather than just a neighbourhood boozer.  Australian-born Kate MacWhirter, part of the team who launched The May Fair hotel’s acclaimed Quince restaurant, is passionate about sustainability and this is reflected in the restaurant’s menu which uses only sustainably sourced, good quality British ingredients. It’s also evident in the sensitive restoration which retained many of the period features and has made the most of the glorious high ceilings. The new owners have had to tread a fine line between retaining some of the old Imperial Arms pub customers, while also becoming a more inclusive, family-friendly space.  This has been done partly by dividing the restaurant into distinct spaces (the front area is dominated by the bar; the back area is dominated by the open kitchen, plus there is a covered garden/courtyard with sofas, a small herb garden and al fresco dining facilities);   and partly by ensuring that the food and drink menu caters to a variety of tastes.  It’s a clean-lined, warm and welcoming space, with an abundance of beautiful features and light fittings (my personal weakness!). On the night we visited, our group was seated at a long table beside the open kitchen to enjoy a selection of dishes from the new menu that head chef Jason Cole has put together. 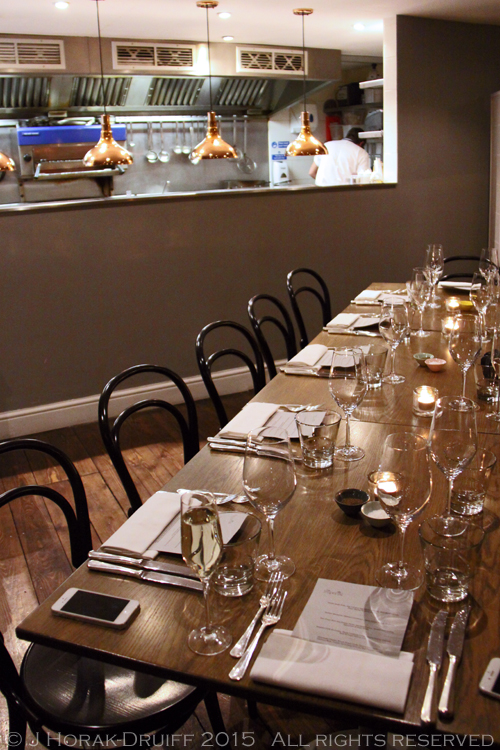 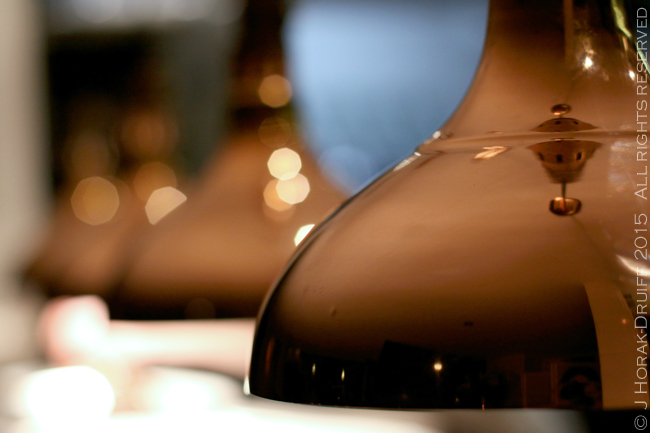 After a welcoming glass of bubbly, we were all seated and ready for the feast to begin. We loved being able to watch the chefs at work in the kitchen, and they took the food paparazzi snapping away in very good spirit!  We started off with the prettiest dish of the night by a country mile: confit duck yolk, hay-infused egg white, pickled wild mushrooms, pearl barley and chive puree.  This arrived, prettily plated with a Nordic flair.  I loved the texture of the confit egg yolk (like thick custard), but was less convinced by the egg white which was of a consistency that defied capture with a fork and had very little discernible flavour. I thought the pickled mushrooms were delicious but possibly a little too powerful for the subtle egg but I am a sucker for pearl barley.  Overall I thought the dish was stronger on visuals than on taste, but definitely did not lack for creativity. 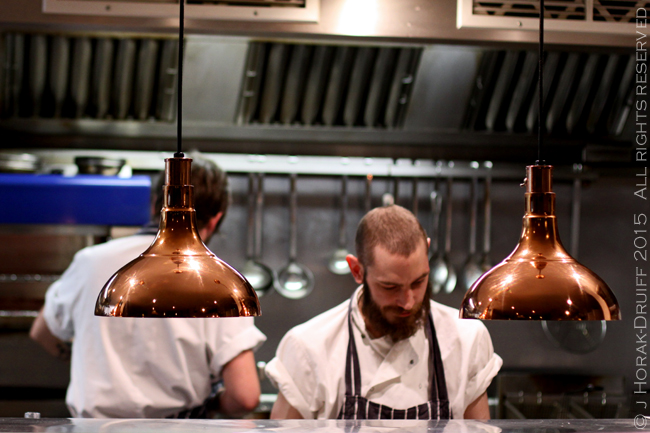 The next dish was super simple and was my runaway favourite of the night: grilled mackerel fillet, pickled cucumber, onion foam and egg crumble. Why do more restaurants not serve grilled mackerel?  I love its pungent and oily pleasures and here it teamed sublimely well with the sweet ‘n sour pickled cucumber ribbons and a subtle but delicious onion foam. I wasn’t entirely convinced by the egg crumble but it did add textural interest. A truly lovely dish.  Staying with fish, the next course consisted of pan-fried wild sea bream fillet, blackened leeks, cauliflower puree, samphire and kale foam.  Delicate sea bream is another fish that I don’t cook with or see on a menu nearly often enough and here it arrived in another visually appealing and almost sculptural plating. The kale foam was a truly dramatic colour, and the blackened leeks were surprisingly beautiful and striking. I thought the flavours (from the sweetness of the cauliflower to the salty samphire to the char of the leeks) complemented the fish without ever overwhelming it. 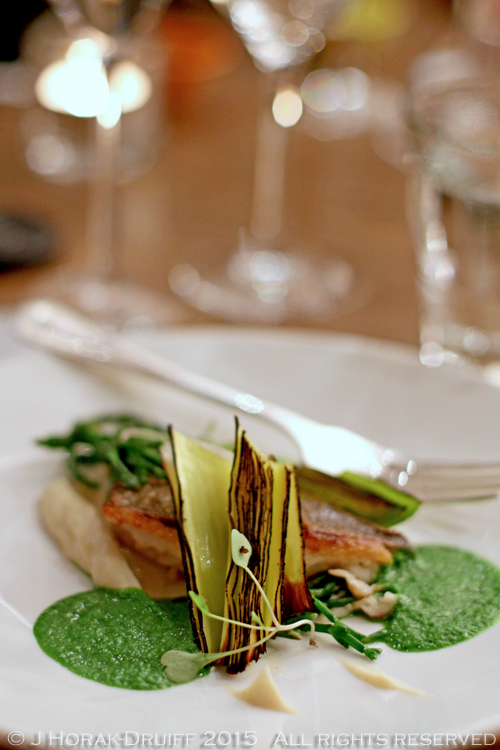 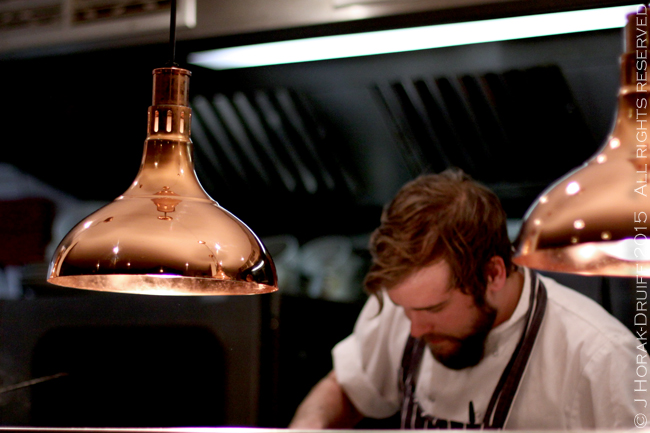 From there, we moved on to the meatier dishes, starting with braised pork shoulder with black pudding purée, chard, pickled chicory and a beer & pearl barley jus. I knew I would love this dish before I had taken even one bite – I mean, what is not to love amongst those ingredients? The pork was cooked to fork-tender perfection and I really loved the rich earthiness that the black pudding purée provided, while the pickled chicory added a sharp note to balance the richness. A terrific, rib-sticking dish. The last savoury course was served family-style on pretty wooden boards for sharing, signalling a departure from the careful platings of the previous courses and feeling more like gastropub comfort food.  This was the Szechuan glazed whole roast duck, spiced red cabbage, coconut rice, purple sprouting broccoli and red pepper sauce.  This dish suffered somewhat from being later in the menu as we were all quite full by this stage, and despite loving each individual element, I am yet to  be convinced that they all needed to be on one plate. The broccoli was al dente and delicious; the rice was sticky and well flavoured; and I adored the red pepper sauce – but somehow the whole was never more than the sum of its parts. The duck was well-flavoured, but the skin lacked crispiness and the flesh on my piece of duck was rather tough (more from under- than overcooking I think) – so probably not my favourite of the night but definitely one with potential that may well become a great dish in the future. 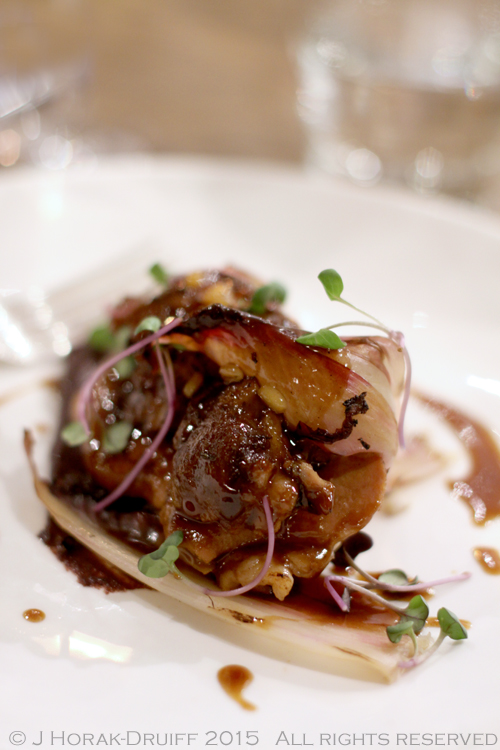 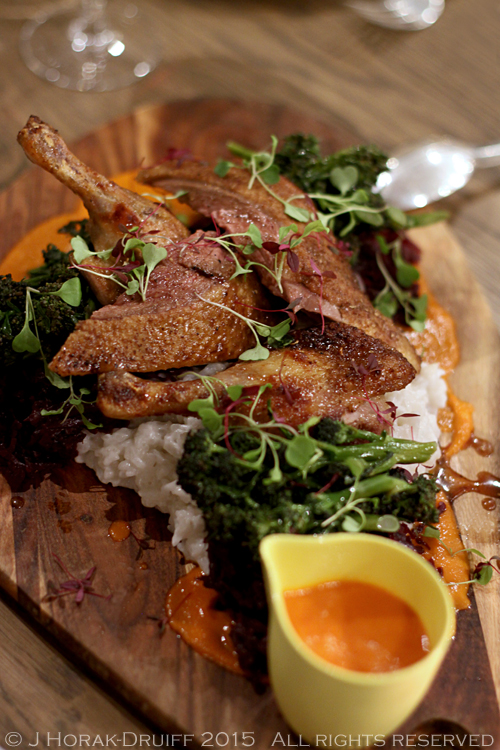 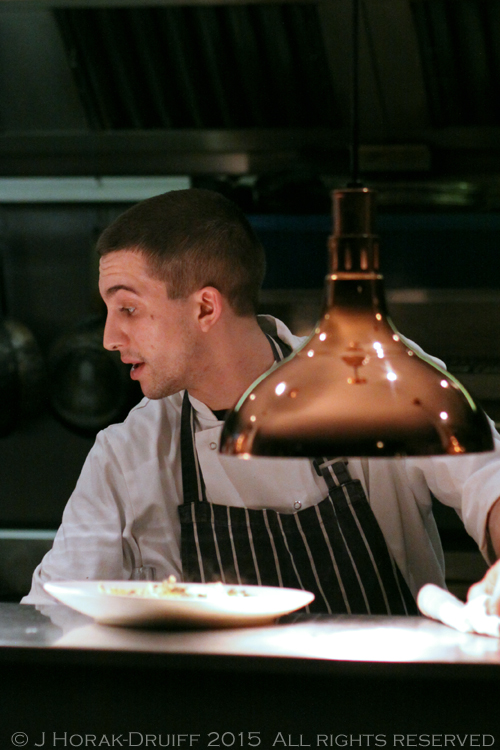 Dessert was clearly not necessary after all that food, but as every schoolchild knows, you have a separate stomach for dessert so no matter how much you have eaten, you can always squeeze in a little something sweet! The dessert turned out to be one of the more unusual desserts I have had recently: a chocolate pot with barley foam, a barley crisp, and chocolate sorbet. Never thought of using barley in your desserts?  Nope, me neither. But suspend your disbelief because it’s surprisingly good as a foil for the rich, sweet chocolate and the lace-thin barley crisp was very moreish, particularly when dipped into the impressively dark chocolate sorbet. A surprising and delicious end to the meal that was neither too rich nor too sweet, washed down by some fresh mint tea. 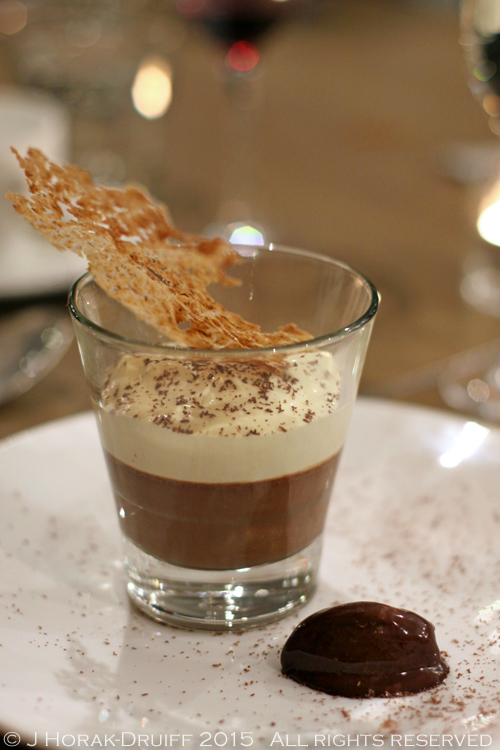 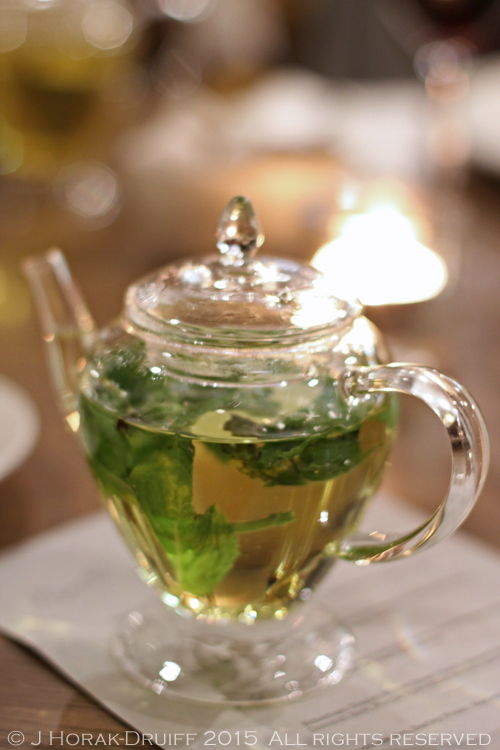 Overall, it was a very impressive evening of interesting and thought-provoking dishes as well as a great showcase of what the kitchen can produce, from the delicate to the hearty.  I loved the relaxed atmosphere of the restaurant and the clean, modern decor that still remained respectful to the building’s history, and the vision of the owners to create somewhere that is all things to all people: a pre- and post-match pub for football fans; a gastropub for foodies; and a family-friendly all-day dining space that serves breakfast, lunch and dinner. There’s also a very beautiful upstairs room that’s available for function hire. And despite my resolute preference for the East end of London, I must confess to feeling a little pang of jealousy for those lucky folk who get to call The Imperial their local.

DISCLOSURE: I enjoyed this meal as a guest of The Imperial but received no further remuneration.  I retained full editorial control and all opinions are my own.