You are here: Home / Recipes / Baking (savoury) / Zwiebelkuche with a South African twist 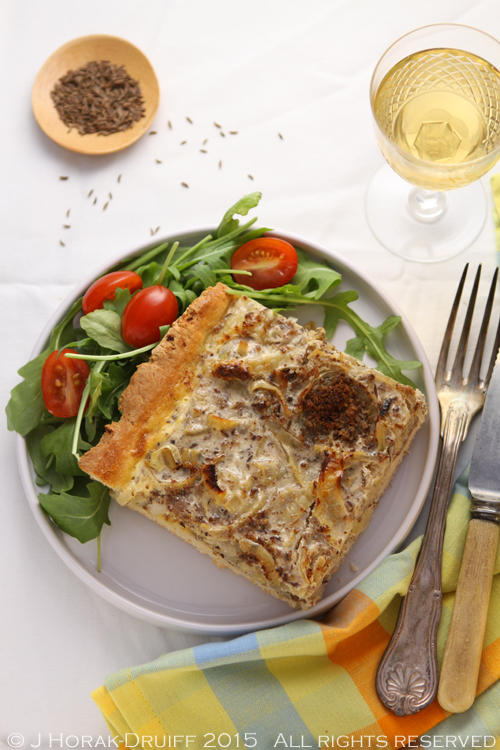 Regard the humble onion. We pick up bags of them, wrapped in their papery brown skins at the market, destined for every dish from a stew to a soup to a stir-fry; we complain when slicing them make us cry; but never pause to think about what amazing vegetables they are.  Because they are bulbs rather than fruit, they leave behind no durable footprint of themselves so there is no archaeological clue as to their original place or origin or when we started eating them.  But onions are referenced in the earliest Indian Vedic writings and appear in Egyptian art and texts 3,500 years ago – so it is fair to say that our love affair with the alium is a long-standing one.

The Egyptians saw the onion as a symbol of eternal life because of its layered structure of a seemingly infinite onion-within-an-onion. Onions covered temple altars and were regularly entombed together with the dead, possibly in the belief that their pungent odour would prompt the dead to breathe again. But for me, the onion is a perfect metaphor for a friendship. It illustrates that an umpromising exterior might hide a multi-layered and complex interior. It mirrors the growth of a friendship where, as things progress, you discover deeper and deeper layers of connection. Just like a relationship, an onion can make you cry even though you love it. And its sharpness when raw contrasting with its sweetness when cooked mirrors the dichotomy within all our personalities.

I guess you could say the first layer of the onion of my and my sister-from-another-mother Meeta‘s relationship was food blogging, which was rapidly peeled away to reveal the next layer: a shared love of Norwegian supergroup a-ha 😉  Over the years we have revealed more and more layers of a complex and nourishing friendship; shared memories, ideas, laughter and tears; and even  exchanged the odd sharp word – but the essential sweetness and complexity of our relationship remains steadfast. So when Meeta recently invited me to collaborate with her on a recipe project, it seemed fitting that onions would somehow be involved! 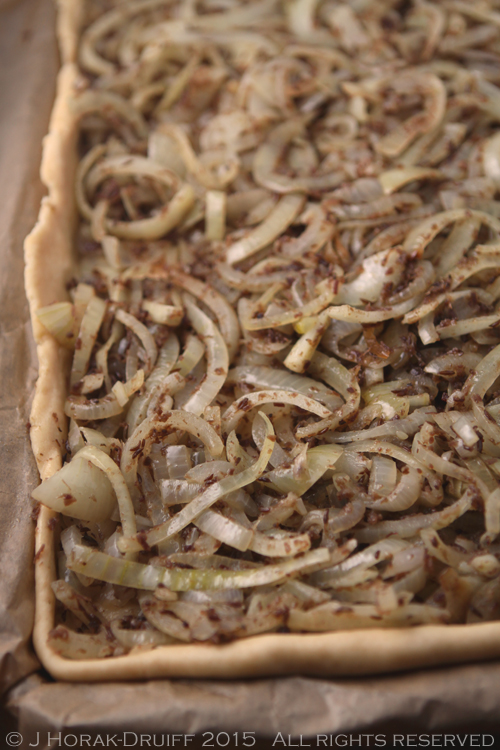 Before I met Meeta, I would not have been able to find the German state of Thuringia on a map if my life depended on it. Most people could pinpoint Berlin and Munich, but Thuringia’s many pleasures are more secluded – rather like an onion hides its sweetness under layers of skin. Formerly part of east Germany, the state lies roughly in the middle of the country and is probably most famous as being the birthplace of the renowned  Bauhaus movement, founded in 1919 by Walter Gropius with the radical objective of unifying all art and design into a single movement. But there is more to Thuringia than art and design – it’s also known for its food! Specialities include Rostbratwurst ( a sausage made of finely minced pork, salt and pepper, cumin, marjoram and garlic since the 1400s and grilled over charcoal), potato dumplings, and a much-loved regional variation of Stollen. In fact, Thuringians feel so strongly about their food that you can visit the world’s first (and probably only!) Bratwurst museum in Holzhausen , or attend Germany’s biggest onion festival in Weimar. 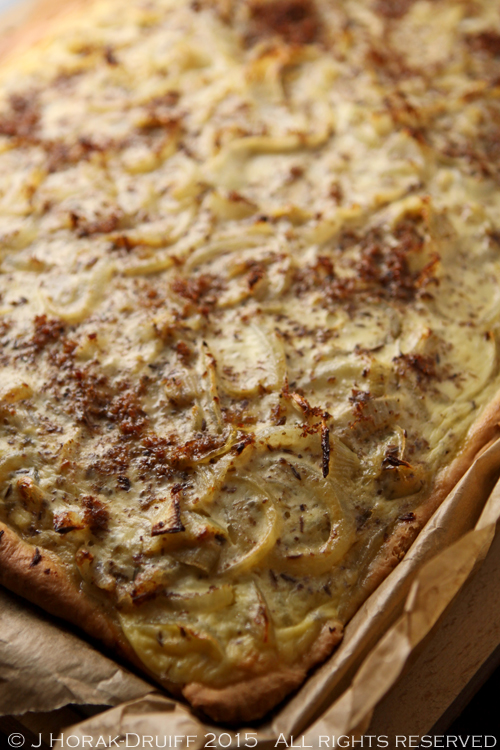 The Weimar onion market had taken place in October since 1653 and has today expanded to include other vegetables, fruit, spices and handicrafts over the course of the weekend closest to October 2nd.  Not only can you buy an astonishing array of onion types, from small to large and from white to purple, but you will also be able to sample many aromatic onion specialties, such as onion soups and stews, onion breads and tarts. The onions are not just sold loose but are primarily sold in traditional decorative braids.  Each braid consists of about 60 red and yellow onions plaited together by their stems and decorated with dried flowers of yellow, white or lilac.  In 1995 the longest onion braid ever crafted for the Weimar market measured an unbelievable 17 feet and was suspended from the tower of city hall. 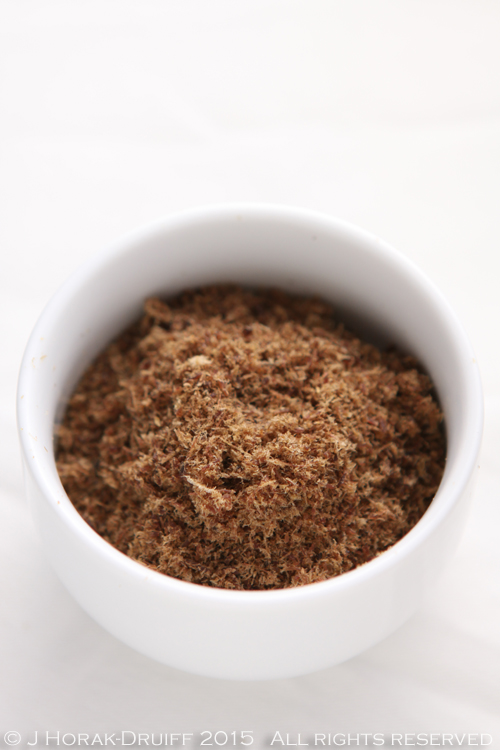 So when I was asked to take part in a Blogparade project with the Thuringian Tourism Board to showcase the pleasures of Thuringian cuisine, I was understandably keen to feature a recipe featuring onions. Like many of you, I have not had the pleasure of attending the Weimar onion market (yet!), but that does not mean I can’t recreate theflavours of the market at home. Zwiebelkuche is a traditional Thuringian onion tart that is sold in slices at markets in the region, piping hot to be enjoyed as a snack on the go – like a Thuringian pizza.  Traditionally, the onions are flavoured with bacon to create an authentic taste but as I was asked to put my own spin on the recipe, I swapped the very German speck for some very South African biltong.  I’ve written about biltong before, but it is basically spiced air-dried beef and it is a firm favourite in South Africa.  I used grated biltong, which is kind of like beefy pork floss, and which you can buy online in the UK.  As it is dry, you lose the bacon fat that would otherwise be released by frying, so top up the butter when frying the onions if they seem a little dry.  The end result was a huge hit here at Cooksister HQ – like a sending our tastebuds on a trip to Weimar via Johannesburg! The sweet onions and the salty biltong turned out to be excellent partners and yeast dough crust makes this a filling, substantial meal when paired with a salad and a glass of crisp white wine. Prosit!

If you are interested in learning more about Thuringian cuisine, be sure to have a look at the Thuringian Tourist Board’s Herzenswärmer recipe blog. Also be sure to check out my fellow Blogparade bloggers who have all posted their take on a traditional Thuringinan recipe:

DISCLOSURE:  This recipe was commissioned by the Thuringia Tourism Board and I was compensated for my time and expertise in creating it. I retained full editorial control and all view expressed are my own. 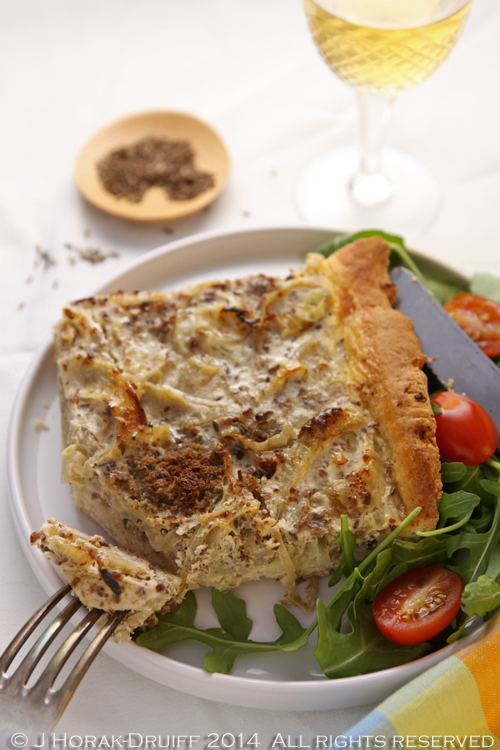 5.0 from 4 reviews
Zwiebelkuche with a South African twist 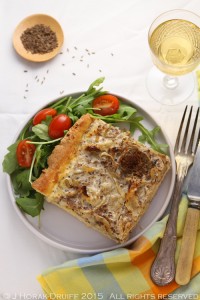