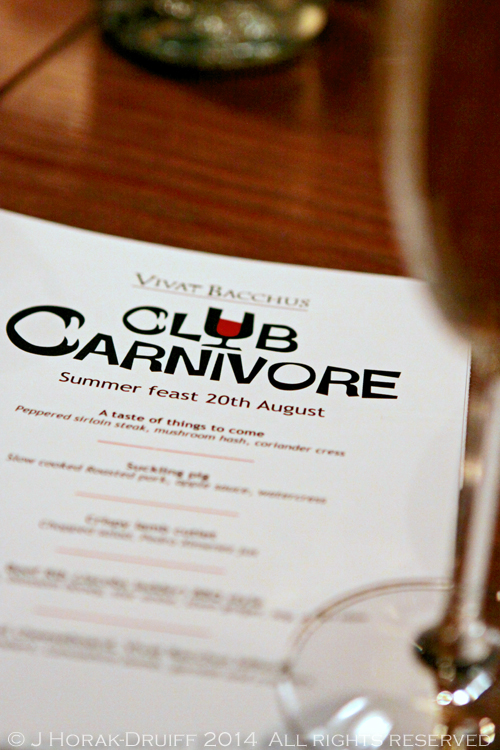 The herbivores do seem to get the short end of the stick, don’t you think?  Their plant-based diet is not very energy-dense and so they have to spend almost all their time and energy wandering from plant to plant and feeding – no time for leisure activities.  And the food they eat is high in cellulose which takes forever to break down – hence the cow’s habit of chewing the cud and its multiple stomachs, some of which are merely fermenting vats to get the grass to break down into something digestible.  Nice.  Oh yes – and they are hunted and eaten by any passing carnivore.  Carnivores on the other hand are the ones who get to swagger around the savannah and the jungle, in glorious fur coats, all glinting tooth and beady eye.  The meat that they eat is energy-dense, so once they have eaten they have plenty of time to relax, play and sleep until they need to go in search of the next meal. Not much preys on them (other than humans), which may account for the swagger. All in all, I would say carnivores have more fun.

And a couple of weeks ago I proved this theory when I got to spend a very pleasant evening some like-minded carnivorous people at one of my favourite London restaurants:  the South African-owned Vivat Bacchus.  I have spent many happy evenings there and have previously written about Vivat Bacchus Farringdon on this blog, but I have never attended one of their famous Club Carnivore dinners.  According the owner and manager Gerrie, Club Carnivore is founded on three simple rules

3. Wine served in MAGNUMS or larger.

Sound like your kind of club?  It certainly sounds like mine!  Knowing the reputation that Vivat Bacchus has for serving outstanding quality meat, and having seen their super-impressive 13,000 bottle cellar, I was super keen to become a member of this club! The event took place in their London Bridge branch (they also have one in Farringdon), in the downstairs dining room and by the time I arrived, the party was already getting underway with a room full of hungry guests, some fantastic South African bubbles from my favourite estate Graham Beck, and the lovely Rosana and Louis there to meet me. guests are seated at long communal tables, which makes for a great social experience as well as a great dining experience. Gerrie explained the format of the evening to us, as well as introducing us to the fact that the restaurant has partnered with Spanish Rioja winery Finca Allende and are launching an Allende private dining room at Vivat Bacchus Farringdon this month. 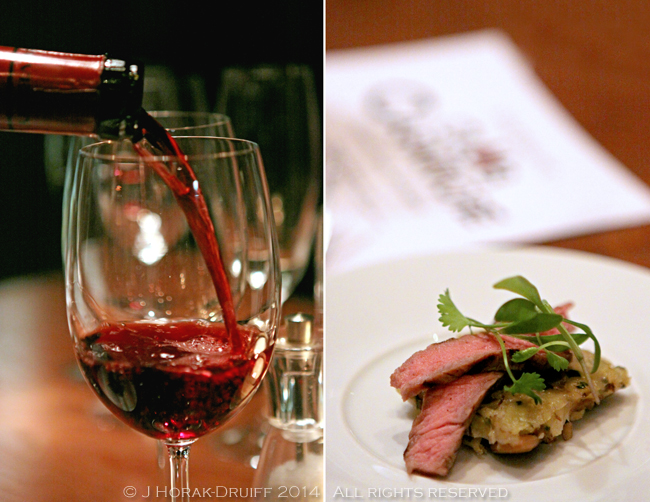 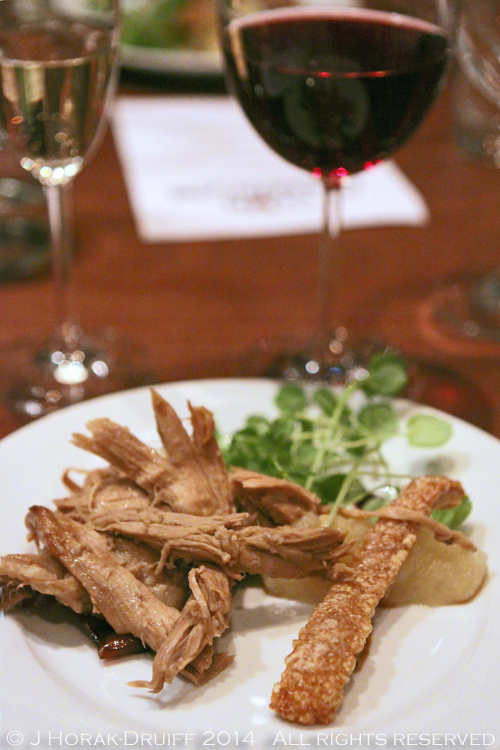 Formalities out of the way, it was time to get carnivorous!  Gerrie had promised that we were going to have meat, meat and more meat – and he was not joking! First up was a pre-starter of peppered sirloin served on a mushroom hash brown with coriander micro leaves. The steam was perfectly pink and fork tender, not to mention wonderfully well flavoured, with the pepper and the coriander added just enough bite.  This was paired with a magnum of Domaine Faively Clos de Myglands 2012, a first growth red Burgundy made with 100% Pinot Noir grapes. This was a deliciously approachable wine, packed with red and black fruit flavours with smoky notes in the background and velvety tannins.  It is said to age well but I do not know how you could resist opening this for more than a month or two! Up next was another pre-starter – more meat, this time in the form of pork, sepcifically the carved version of the whole suckling pig that had greeted us on a corner table as we arrived. The meat was tender enough to qualify for pulled pork and contrasted nicely with the super-crisp crackling and the tart apple puree that it was served with. 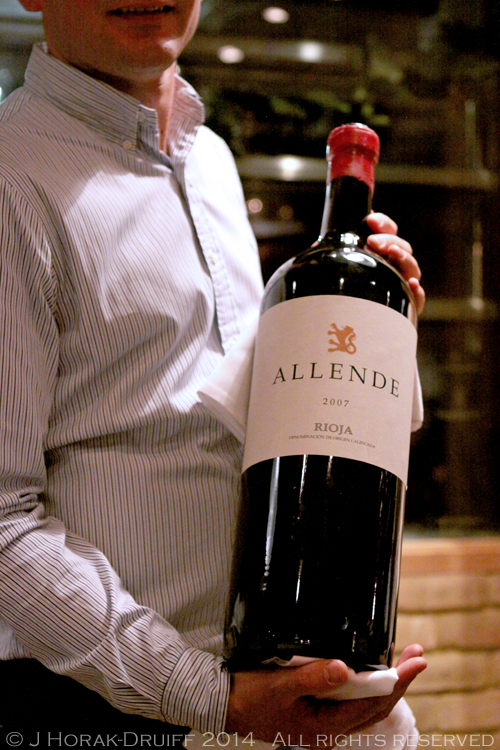 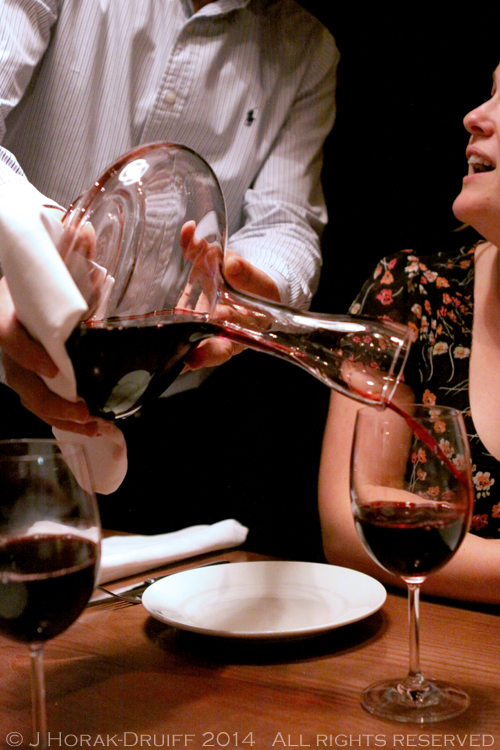 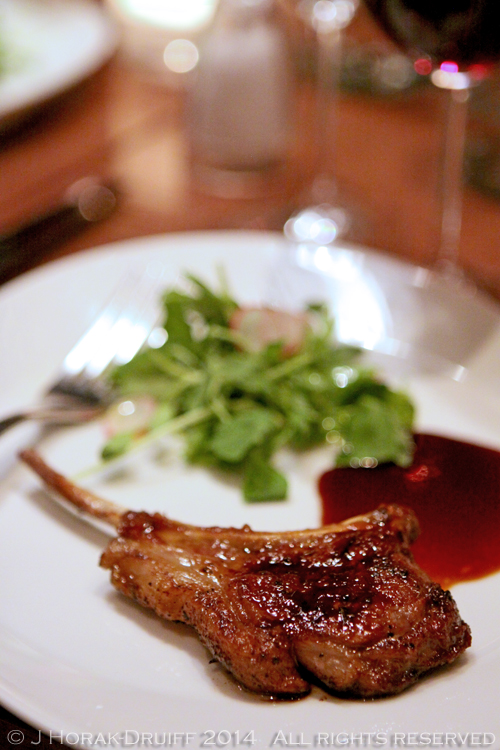 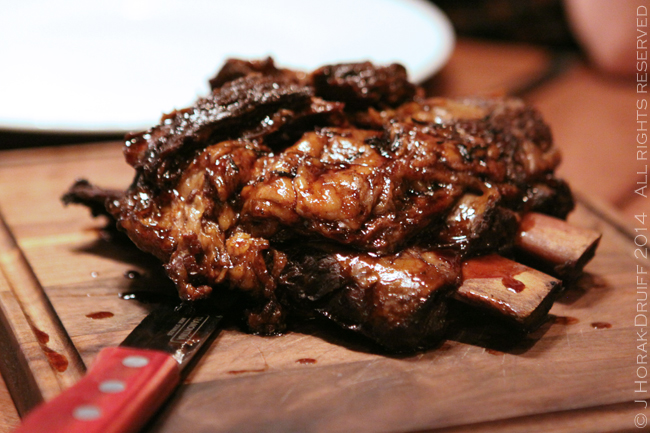 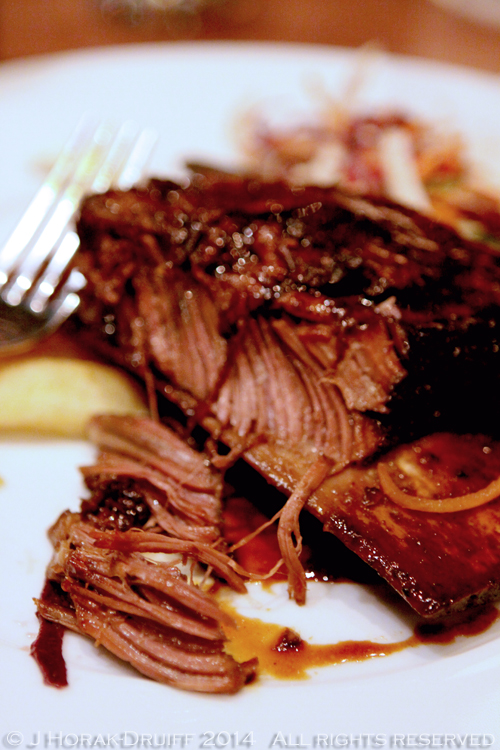 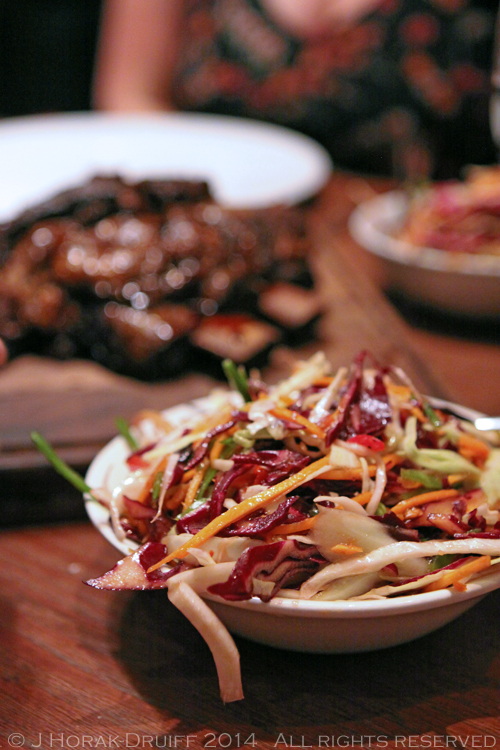 In preparation for the arrival of the starter, we were served our next red wine, this time out of the biggest bottle I have ever seen open (as opposed to on display at a wine estate or wine shop!).  It may have been a Jeroboam, or it may have been larger – all I know is that it was Seriously Impressive! This was the 2007 Rioja Finca Allende, a bold and lovey with a rich garnet colour and wine and an appealing palate of dark red fruits with a hint of jamminess and spicy cigar box notes.  The first course to pair with this (and the first on the regular menu) was the Karoo special of a crispy lamb cutlet with a Pedro Ximenez jus (£10.90).  This dish made my South African heart sing – this is just how I like my lamb chops done on the braai: to a crisp! I also thought the rich PX jus with it was an inspired choice. And then it was time for the main event: our main course of Jacob’s ladder:  BBQ short rib of beef in a Coca-Cola glaze with a  blossom honey, star anise, soy and stem ginger sauce (£19.50).  The first thing you notice about these ribs is their sheer size: each bone is over an inch wide and loaded with beef slow-cooked until fork-tender. Again, the sweetness of the glaze and sauce worked surprisingly well, and the flavours in the sauce complemented the spicy, crisp Asian slaw beautifully. 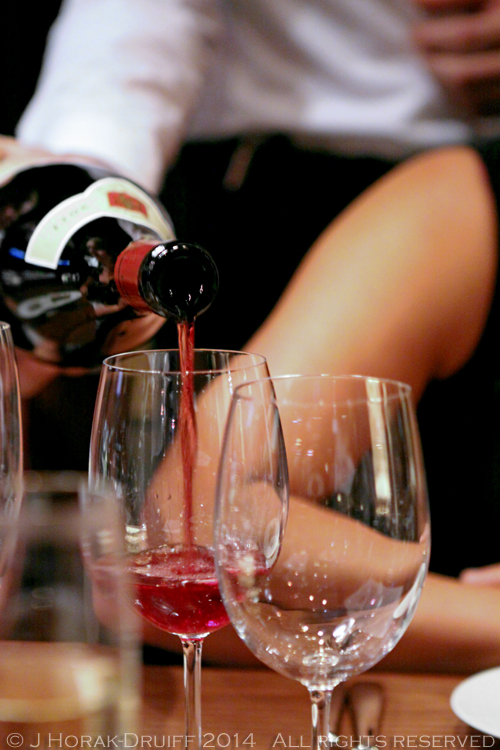 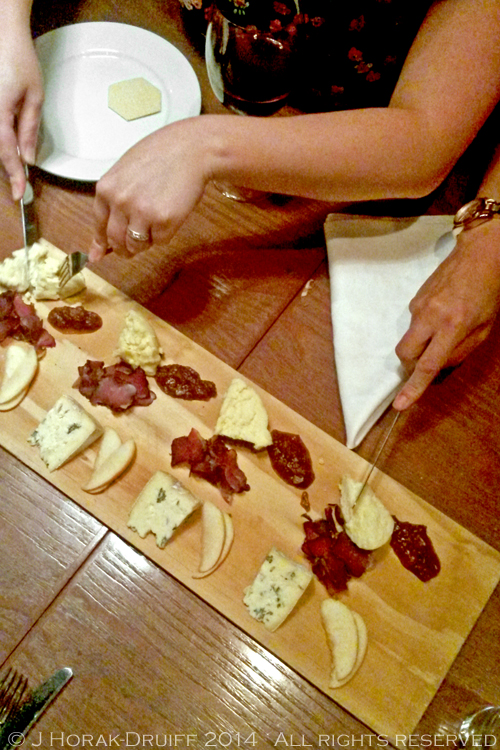 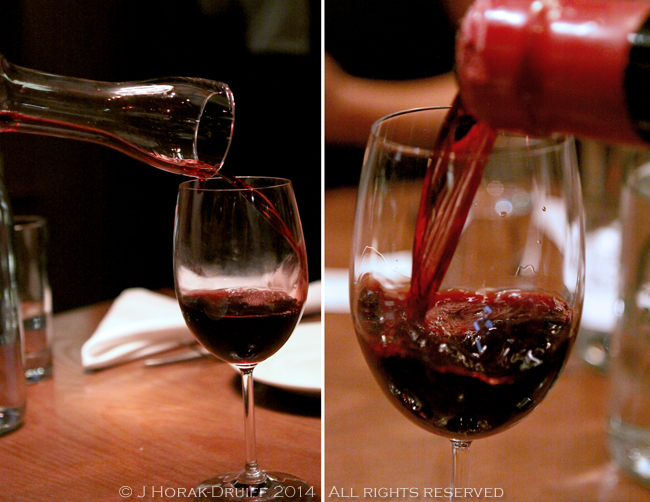 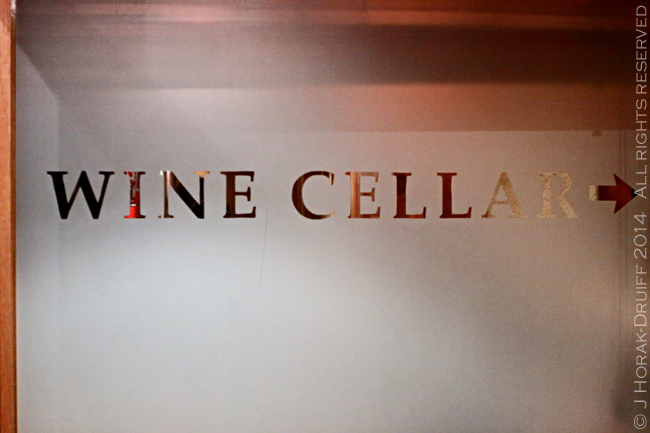 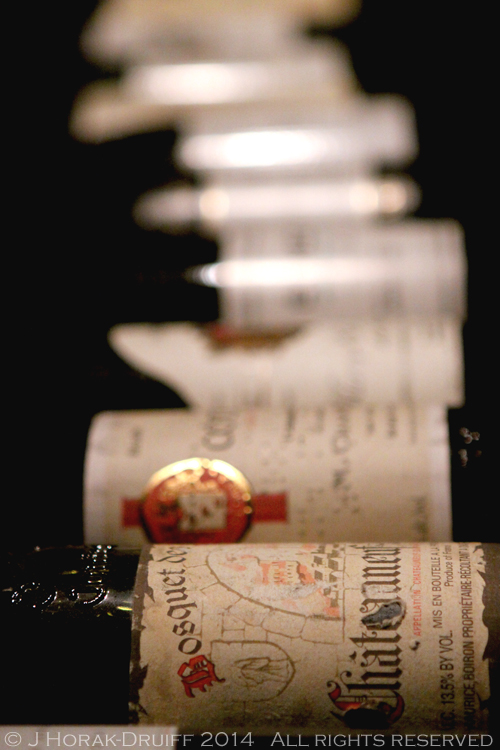 It would not have seemed appropriate to end such a butch meal with anything sweet, so our final course was a cheese course consisting of sharing boards of French Fourme d’Ambert and British Lancashire bomb, one of my favourites. These excellent cheeses were accompanied by thinly shaved biltong (yes, more meat!), chutney and crackers.  And of course, all the remaining red wine!  We also received a tour of the cellar which houses a impressive array of wines and some very lovely South African wines.

It was a most enjoyable evening of excellent food and wine, and charming sociable company. I loved the interaction that the shared tables (and the wine!) facilitated, and the unashamedly carnivorous menu (there is no vegetarian option available, in case you were wondering!) packed with a variety of outstanding meats. I can’t understand why more restaurants do not serve beef short rib as a rack – it is quite spectacular. Keep an eye on the Vivat Bacchus website to see when the next Club Carnivore dinner is scheduled – tickets cost £79 per head which includes all food and wine.

For another perspective on the evening, see Rosana’s post – and she also took the picture of me getting cosy with the very large bottle of red wine! 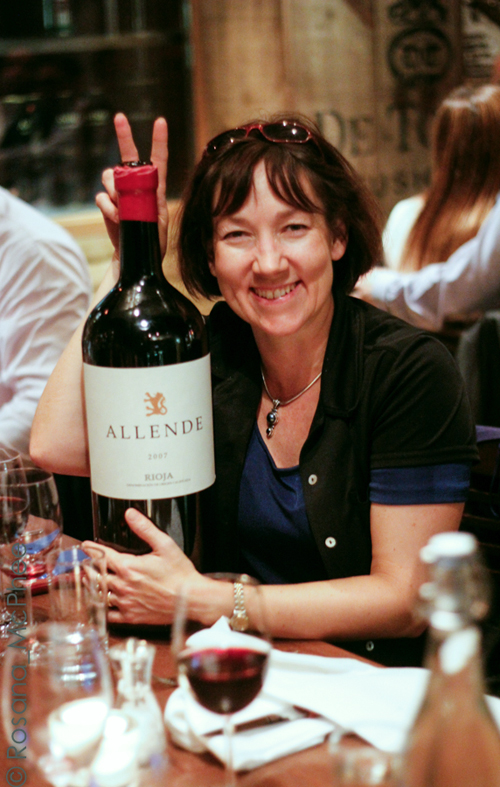 DISCLOSURE: I enjoyed this meal as a guest of Vivat Bacchus but received no further remuneration and was not required to write a positive post.   I retained full editorial control and all opinions are my own.
Vivat Bacchus (London Bridge)
4 Hays Lane
London Bridge
London
SE1 2HB