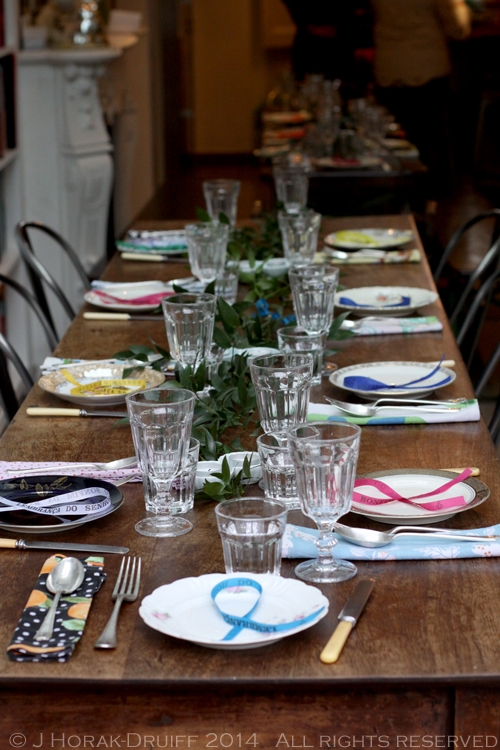 I remember when it was announced that the next host nation for the FIFA World Cup was to be Brazil.  On the faces of my Brazilian friends I saw the same eye-rolling mixture of boredom and scepticism that my own face had adopted when it was announced that South Africa was to host the 2010 FIFA competition. “Nothing will be ready on time!  There will be a mass wave of crime! It’s going to be chaos – we can never organise anything properly! What an embarrassment this will be!” Yup – heard all of these before – many from my own mouth four years ago.  And to this day I regret not having found the money to fly home for a visit in 2010 during that exhilarating, inspiring three weeks of vuvuzela-fuelled madness. Because just as South Africa’s turn in the FIFA’s spotlight exceeded all expectations and confunded the would-be critics, this has been the summer when we were all a little Brazilian. 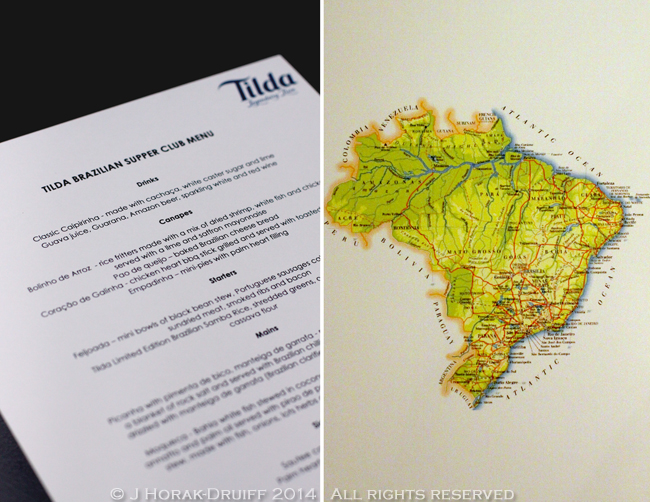 At the height of Brazil-mania a month or so ago, Tilda invited me to a special Brazilian supperclub to be co-hosted by my friend Rosana and 2010 Masterchef winner Dhruv Baker, at the home of the lovely Luiz. When two Brazilians and a Masterchef winner invite you to a Brazilian dinner, there is only one correct answer:  “What time do you want me there?”.   As always, Luiz’s home was a beautiful setting for the evening, with the long dinner tables set with mismatched vintage crockery stretching all the way to the terrace where rather potent and moreish Classic caipirinhas with cachaça, white wine, caster sugar and lime were being served.  As we stood around chatting, we got to watch Dhruv show off his barbecue skills  and before long we were snacking on the first of the canapés: Coração de galinha or skewered barbecued chicken hearts served with toasted casava flour.  These little nuggets were meaty and seriously delicious – not at all like organ meat.  In fact, if nobody had told us what they were we would have struggled to guess.  Other canapés included Empadinha or mini pies with palm heart filling (decadently light and buttery);  Bolinho de arroz or rice fritters made with a mix of dried shrimp, white fish, chicken and rice served with lime & saffron mayo (a fabulous combination of flavours); and my personal favourite – Pao de queijo or baked Brazilian cheese bread balls.  These addictive balls are made with cassava flour and a lot of cheese, resulting in a crispy exterior and a featherlight but cheese-laden interior.  Seriously addictive. 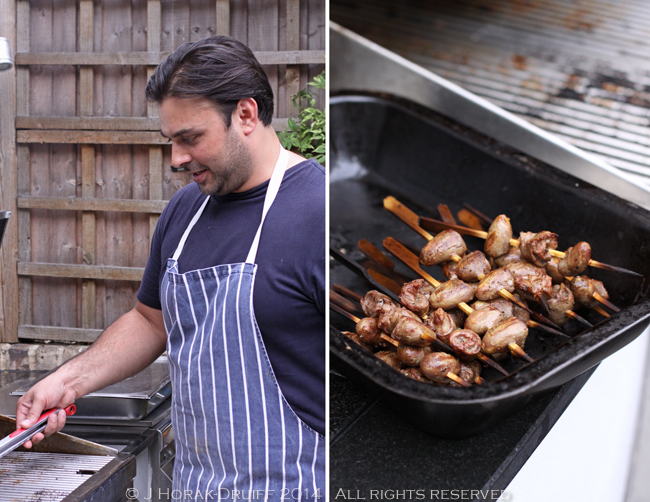 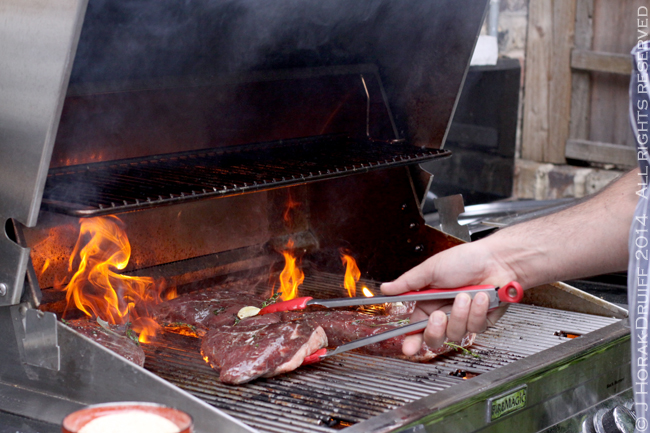 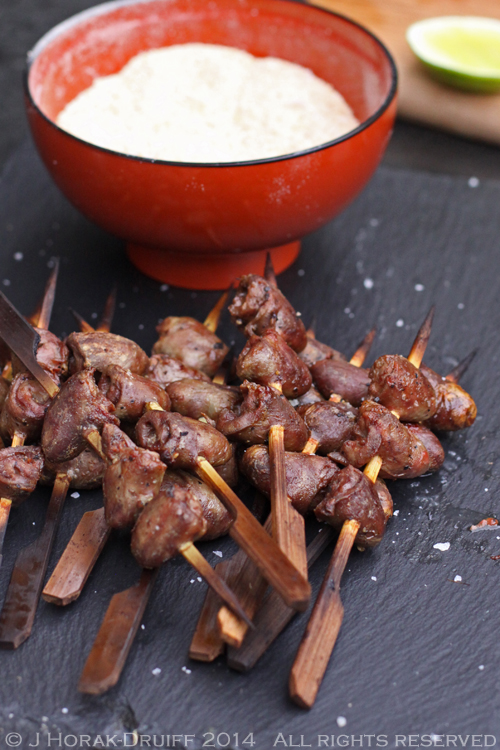 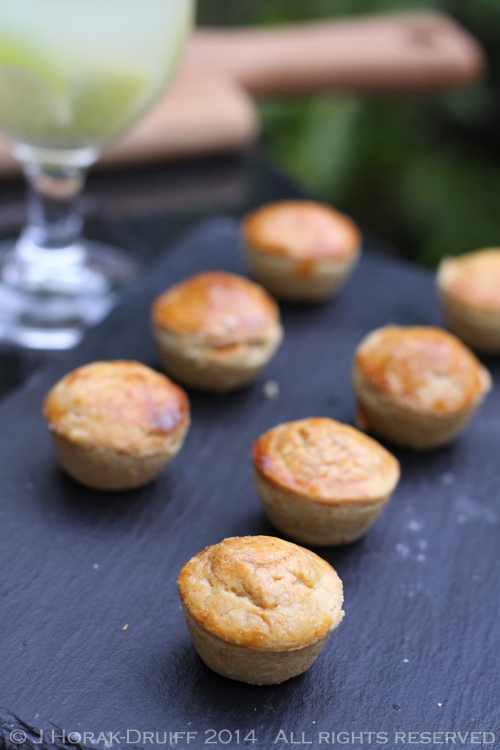 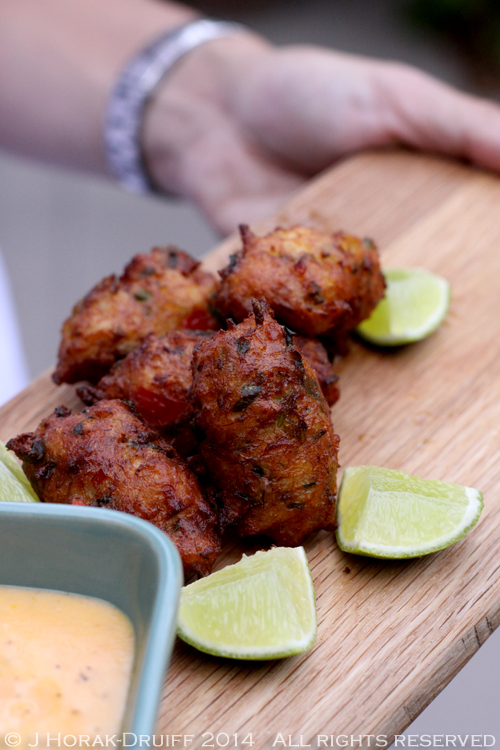 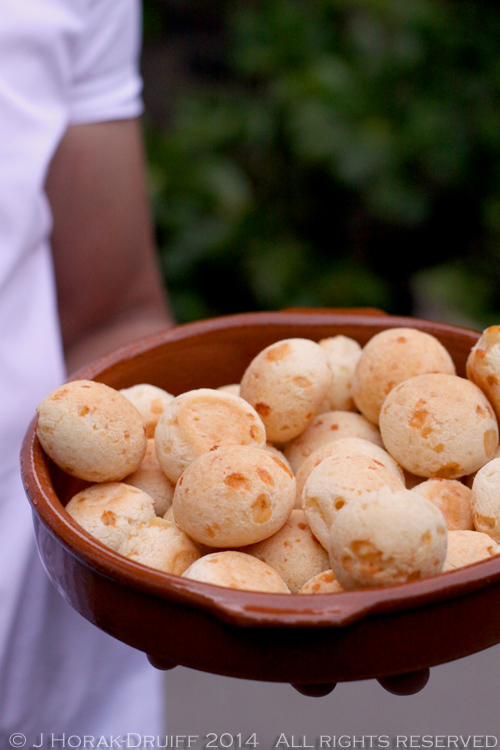 Soon it was time to take our seats, so we headed inside to the tables.  On each plate, Rosana had provided a Fitas do Senhor do Bonfim da Bahia – or a Brazilian wish ribbon.  “Senhor do Bonfim” translates to “Our Lord of the Good End” and refers to Jesus Christ at the moment of his death. A statue of Senhor do Bonfim, replicating one found on a shipwreck in Portugal, was brought to Bahia in Brazil in the 1700’s by a Portuguese Naval Officer to fulfill a promise and still resides in a church there.  “Fita” means “measure” and the wish ribbons are usually 47 cm long – which corresponds to the length of the right arm on the statue of Senhor do Bonfim on the altar of the church in Bahia.  The ribbons are available in a rainbow of colours and are worn as a good luck charm by those hoping for a miracle, however big or small.   Rosana explained that the bracelet must be given to you by a friend (Rosana in our case!) and must then be tied around your wrist by another friend (our neighbour at the dinner table), making three knots.  For each knot, you get to make a wish.  When the bracelet naturally disintegrates over time, it is believed that your wishes will be fulfilled. 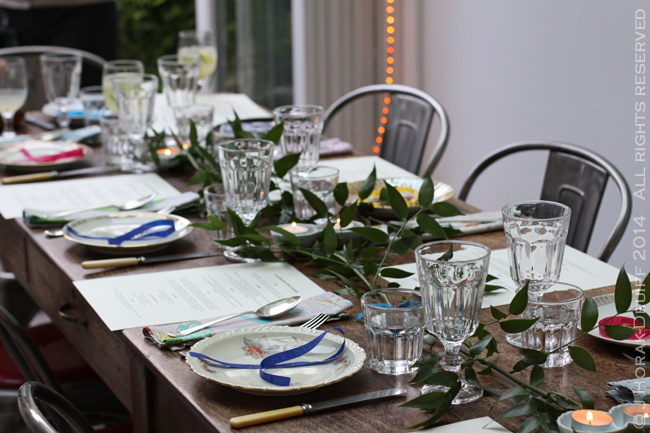 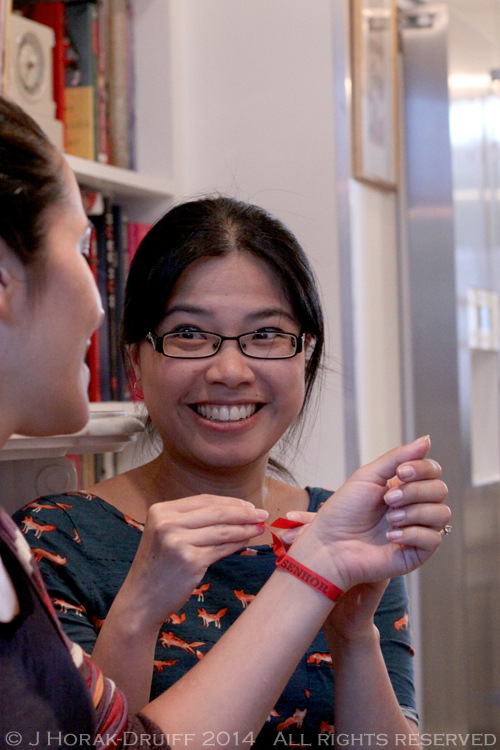 With our bracelets securely tied and wishes made, it was time for more food!  Our starter was the dish I had been begging Rosana to make ever since I was invited to the supperclub:  mini bowls of feijoada! This classic slow-cooked Brazilian stew is made of black beans, Portuguese sausages (calabresa and paio), sun-dried meat, smoked pork ribs and bacon, and it is one of the most comforting dishes known to mankind.  Rosana served hers with the traditional accompaniments of shredded greens, a slice of orange and toasted cassava flour, on top of Tilda’s limited edition Brazilian samba rice (more on this later). It was like a blissfully warm, smoky Brazilian hug in a bowl.   T o accompany our meal, we were also offered South American wines and Brazilian Amazonian beers, as well as Guarana Antarctica – a popular Brazilian energy drink. 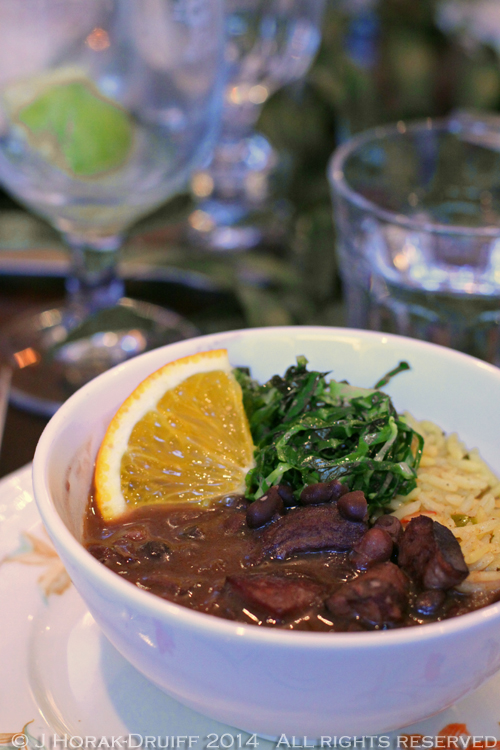 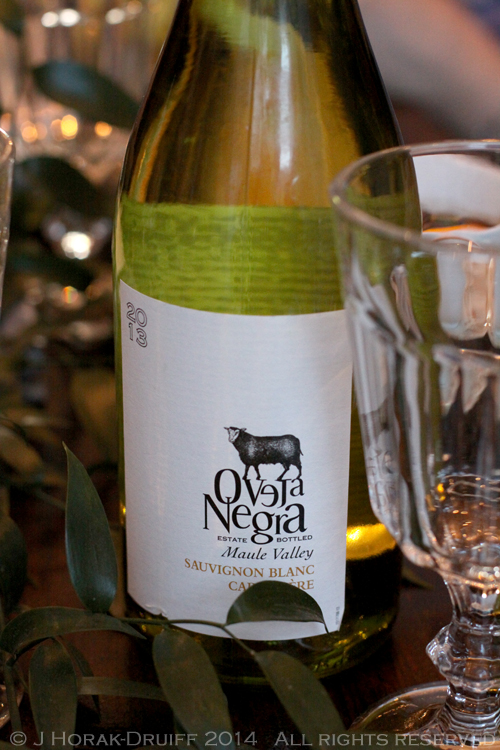 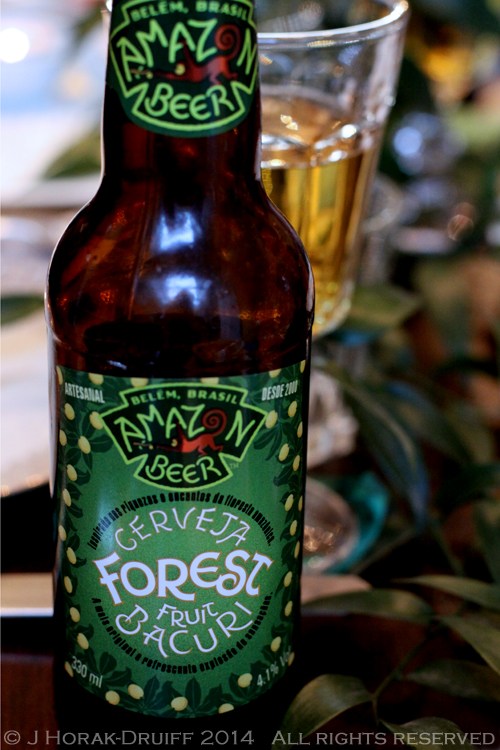 OUr main courses kicked off with one of my favourite dishes of the night: Moqueca or Bahian white fish stewed in coconut milk with tomato, onion, coriander, annatto and palm oil.  Although I am obviously aware that Brazil has a coastline, I had never associated their cuisine with a dish like this, which had almost Thai overtones to it.  I loved the lightness and the warm spiciness which never threatened to overpower the delicate fish.  A glorious dish!  Alongside the fish stew we also had the traditional accompaniment of  Pirao de Peixe,  made with fish, onions, herbs and broth thickened with cassava flour.  It’s apparently a recipe with as many variations as there are Brazilian households! And then came the gorgeous hunks of beef that Dhruv had earlier been barbecuing outside, transformed into Picanha with pimenta de bico and mantiega de garaffa. This dish consisted of rump cap of beef, barbecued medium rare, drizzled with clarified butter and served with Brazilian chile peppers and whole roasted garlic bulbs.  This was carnivore heaven – pink and tender, juicy meat tinged with the smoky flavours of the barbecue, together with the mellow flavour of the roast garlic and punctuated with the little chilli flavour bombs. Just to keep our arteries from seizing up entirely, this was served with a beautiful tomato, red onion and heart of palm salad as well as sautéed cassava and glorious fried plantain slices. 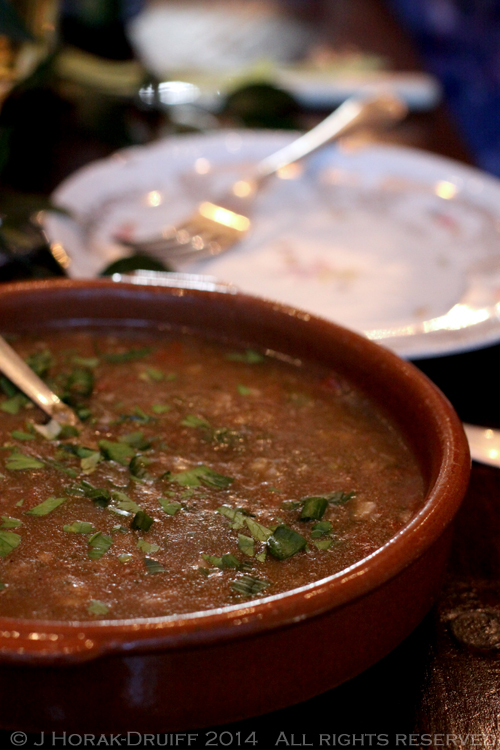 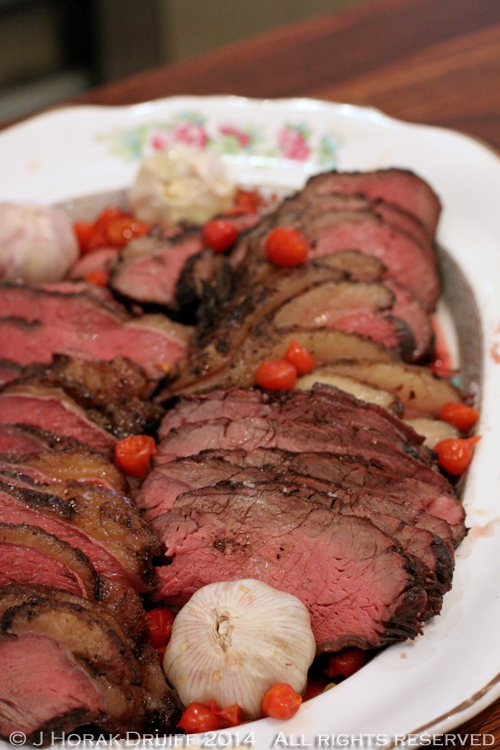 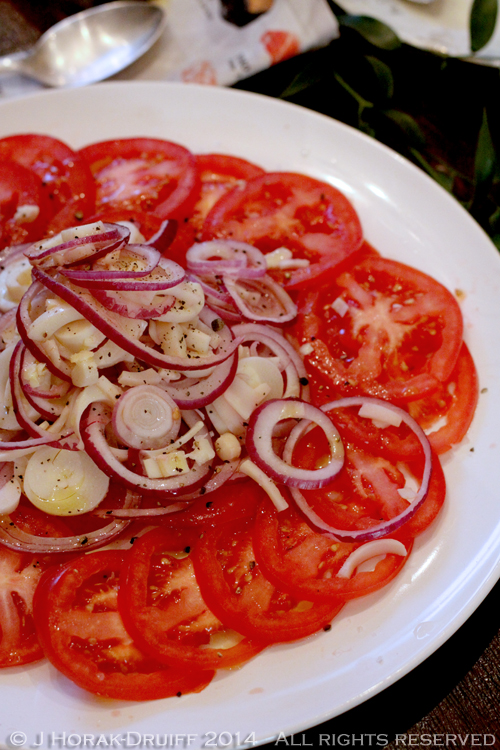 To end with, Rosana and Dhruv produced a trio of Brazilian desserts.  Caju sorbet is made from the cashew apple – the fruit that houses the cashew nut.  It has a fabulous creamy and subtly nutty flavour – the kind of thing that you would love but not quite be able to place if you did not have the menu to assist you. I really loved this and am also now curious to know what the raw fruit tastes like! Then there was quindim, a popular Brazilian baked dessert made from sugar, egg yolks, and ground coconut. The end result is kind of like a very sweet custard studded with coconut – and it comes in small bites as it is really rich! I loved it because it reminded me of South African coconut tart 🙂 And the piece d’resistance was the brigadeiro de copo, a mixture of sweetened condensed milk, butter and cocoa powder which are boiled together. The end result is like a thick chocolate caramel pudding – utterly decadent and super-rich.  And to wash all this down, what better than a sparkling Aurora Moscato… from Brazil! 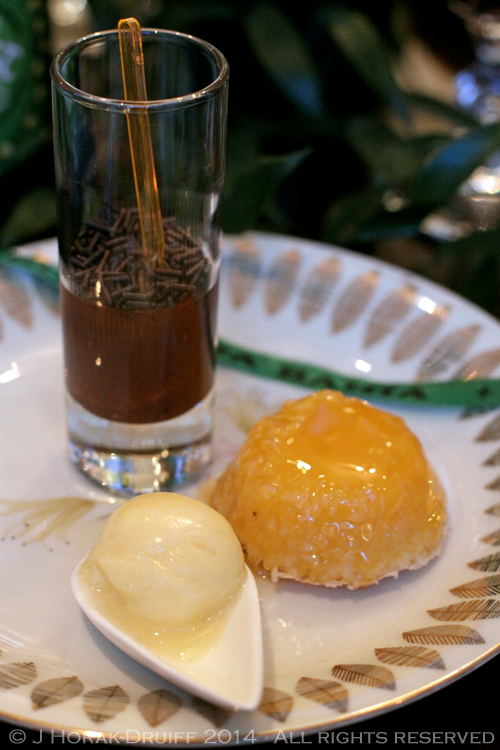 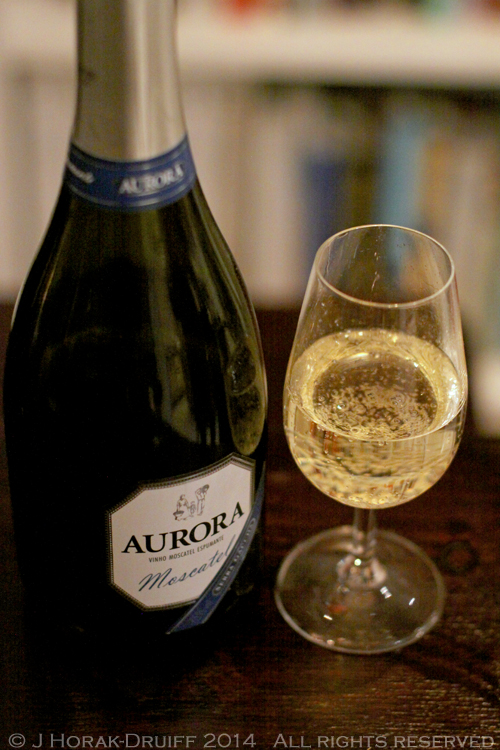 To celebrate Brazil-fever, Tilda rice collaborated with  Dhruv Baker to create  limited edition Brazilian Samba Rice.  These convenient part-steamed pouches of Tilda’s classic Basmati contain a combination of red and green chillies, lime and tempero baiano spice mix – and at the end of the evening we all received a couple of pouches to experiment with at home.  Brazilian samba rice pouches are available at all leading supermarkets – but only till November. Thanks ever so much to Tilda, Rosana, Dhruv and Luiz for a truly memorable evening of reacquainting myself with old Brazilian favourites and discovering new ones! 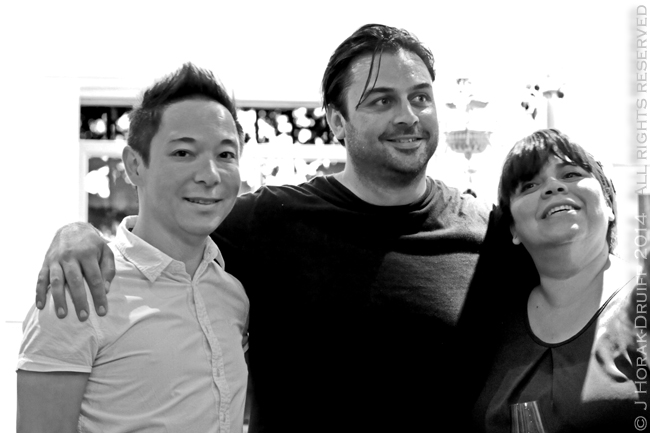 For other impressions of the night, have a look at:

DISCLOSURE:  I attended this dinner as a guest of Tilda Rice and Wildcard PR but received no further remuneration to write this post.  I retained full editorial control and all opinions are my own.