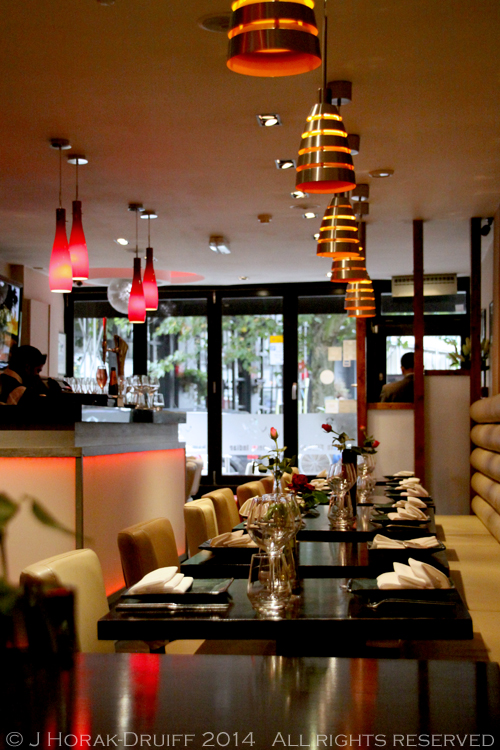 Anybody who has visited London for any length of time will be aware  of the city’s (and indeed the country’s) love affair with Indian cuisine.  You can travel to the teensiest, least ethnically diverse hamlet in the remotest part of the UK… and I will bet money on the fact that you will find a curry restaurant there.  Growing up in Port Elizabeth, I thought curries only came in three varieties: hot, medium and mild (with the option of chicken or lamb in each category).  Imagine my surprise when I arrived in London and discovered the many and varied delights of korma, tikka masala, jalfrezi, tandoori,  rogan josh, vindaloo,  balti, dal and the myriad other variations on the basic theme  of spicy  food from the Indian subcontinent.  But as they say, familiarity breeds contempt and after all these years in London, rather than yearning for yet another balti chicken curry, what I really yearn for is an Indian restaurant that offers something a little different rather than the same dozen familiar dishes over and over again ad nauseam.

Enter Namaaste Kitchen, brainchild of chef-patron Sabbir Karim,  the only award-winning chef I have ever heard of who also works as a purser on British Airways flights!  Having previously worked at Red Fort and Chutney Mary, Chef Sabbir opened his first restaurant, Salaam Namaaste, in Bloomsbury in 2005.  Karim’s fresh approach to Indian cooking led to the restaurant being described as a “journey into a world where the tired clichés of the curry house have no place” – and that can equally be applied to his second restaurant, Namaaste Kitchen, which he opened in 2010 in Camden.  Having been informed by clippings at the restaurant entrance that Karim had won Chef of the Year in the Asian Curry Awards 2012 & Asian & oriental Innovative Chef Of The Year 2013, we could not help but expect great things.  The long, thin room is lined with cream banquettes and dark wood tables, with warm colours introduced by way of various funky light fittings and red banquettes towards the back of the restaurant.  Other than poppadoms and chutneys, the menu is devoid of the dishes you might normally expect in a London Indian restaurant and faced with a fairly unfamiliar selection of dishes, we asked the kitchen to send us their choice of dishes that would best showcase the restaurant’s menu.  In the meantime we snacked on said poppadoms served with three chutneys (£1,20):  mango & pineapple; tomato; and coriander, mint & green chilli.  I loved the sweetness of the mango, but also the green herby tang of the coriander chutney, and the poppadoms were fresh and plentiful. There is also a great cocktail menu and I had a delicious concoction involving (as I recall) infused vodka and crushed fresh blackberries, served in a martini glass. 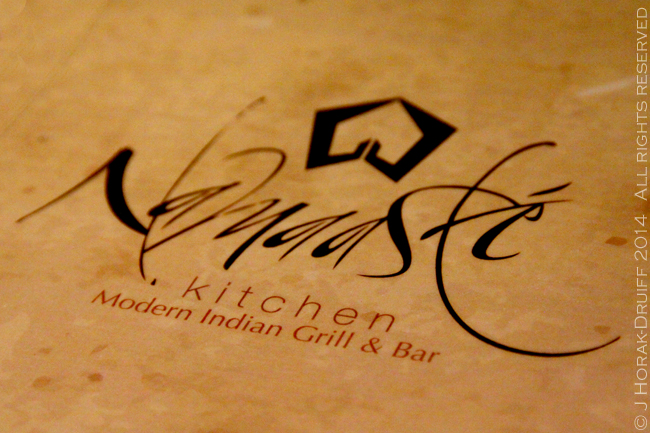 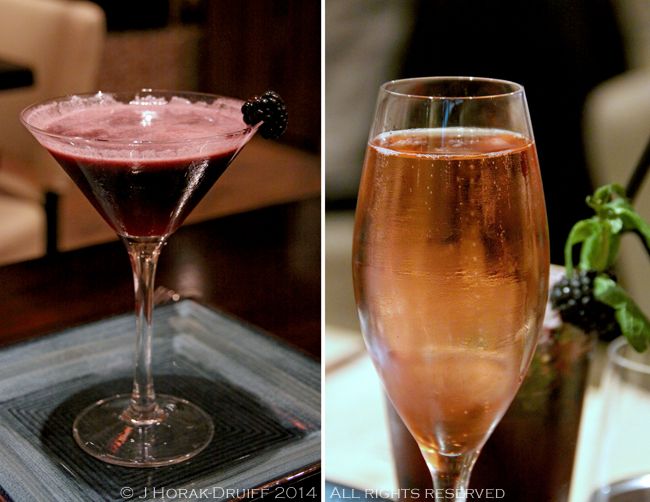 We kicked off our meal with a selection from the starters menu.  Without a doubt, the highlight was one of the restaurant’s signatire dishes: tandoori Portobello mushroom (£4.75) Portobello mushrooms are marinated before being stuffed with figs, cashew nuts, raisins, green chilli and homemae cheese, and then cooked in a tandoori oven.  I would never in a million years have thought to pair cheese with mushrooms and figs in a single dish, but the end result was fantastic – an unusual and successful medley of spicy, earthy and sweet flavours. Another favourite with our group was the spicy soft-shell crab (£5.95), gently spiced, crispy and succulent with a good ratio of meat to shell/batter.  The tangy fig and prune sauce paired with it was  well matched to the spices as well.  I am nut usually a huge fan of paneer, but the Barwan panir shaslik (£4.50), a skewer of grilled paneer cubes and bell pepper chunks was excellent, served drizzled with a chilli sauce that offset the mild flavour of the paneer nicely. 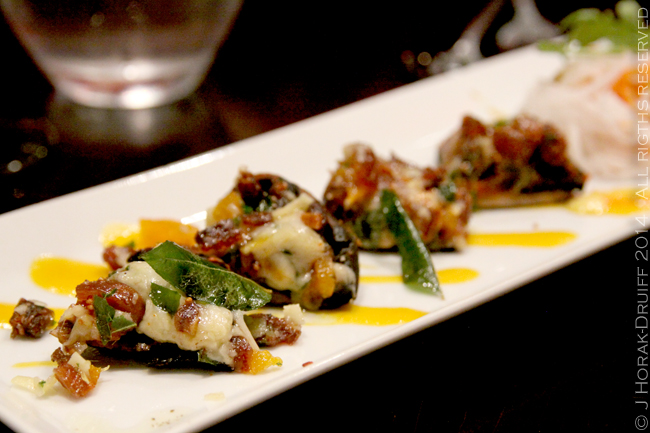 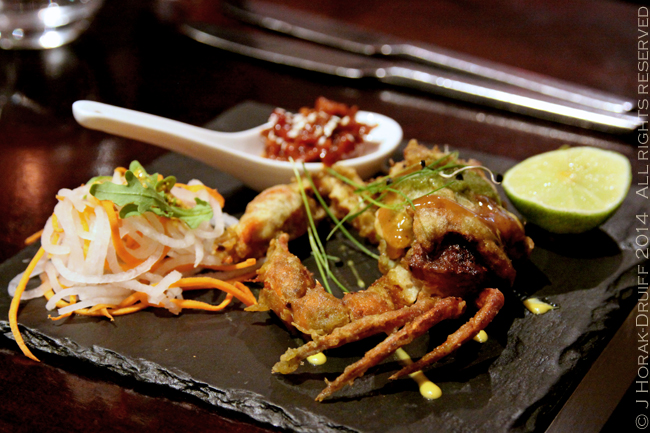 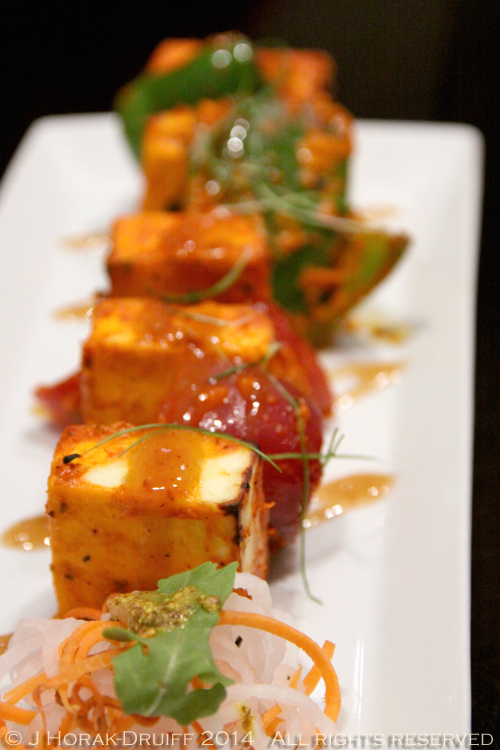 Still on the starters, the coriander lime chicken tikka (£4.50) comprised succulent chunks of corn-fed chicken grilled in a fresh lime and coriander sauce,  served with a spicy roasted tomato and sesame seed sauce. I loved the juiciness of the meat and the tangy marinade – but probably not one to order if you do not like coriander! The very impressive looking tandoori aatish-e-jingha (£5.50) consisted of skewered spiced King prawns cooked in the tandoor oven with caraway butter, and served with an aubergine compote.  The prawns were ridiculously big and juicy and the combination of their sweet flesh together with the spices and the char from the oven was spectacular. We also enjoyed the sholay salmon tikka (£4.95), generous chunks of salmon cooked with a fresh spice paste – a dish that made me wonder why I don’t make fish curries more often. 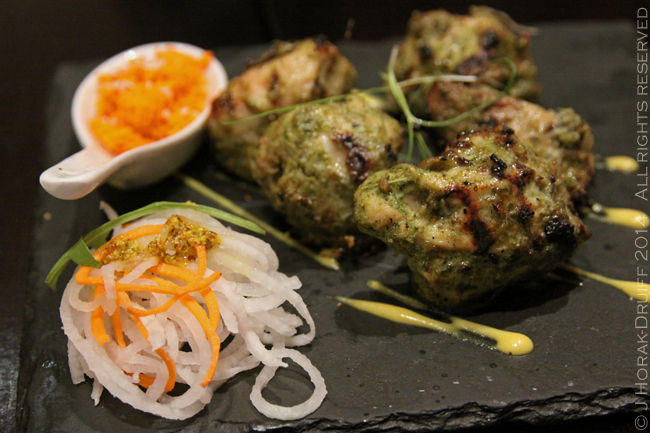 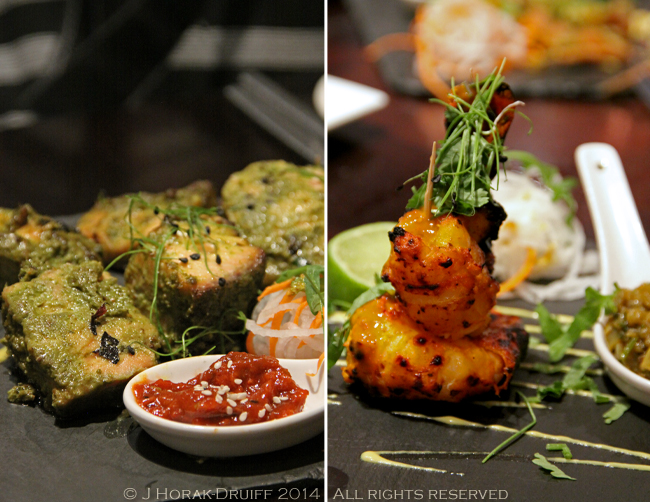 It’s a good thing there were a few of us around the table, otherwise we would never have been able to finish the starters – let alone anything else!  But strength (and capacity!) in numbers meant we were able to sample a number of main course dishes too.  The Peshawari lamb chops (£10.95) reminded me of the kind of thing that people queue around the block for at Tayyabs – tender lamb chops marinated with fresh ginger paste, raw papaya and spices before  being chargrilled, leaving the outside well… charred, and the inside moist and pink. The marinade had clearly been allowed a long courtship with the meat as the flavours had really penetrated into the meat, making this a particularly flavoursome and enjoyable dish. An unusual dish was the Goan-style sea bass (£12.95):  rather than a saucy curried fish stew, this consisted of a stack of sea bass fillets perched on a polenta “brick”, each dusted lightly with spices before frying, and a show-stopping coconut, mustard and curry leaf sauce that left us all yearning for the recipe. The dish itself apparently won an award at the Curry Awards – and it is easy to see why! I only had a tiny taste of the Rajasthan laal maas (£12.95), a “very spicy” lamb curry with roasted red chillies and pulao rice.  The meat was slow-cooked to the consistency of pulled pork but the dish was slightly too spicy for my taste.  Nick would have loved it though! The murgh Makhanwala (£12.95) was probably the closest approximation of what you’d usually expect to find in a London curry house: chunks of chicken breast grilled and then simmered in creamy butter & tomato sauce with ginger and crushed fenugreek leaves. Think chicken tikka masala but with less sweetness and more complexity of flavour.   We also tried a vegetarian main in the shape of  kadai sabzi (£8.50): assorted bell peppers, baby corn, paneer and sugar snap peas cooked in a spicy sauce.  As if this were not enough deliciousness, we also had a few side orders, the best of which for me was the sesame baby aubergines with a mustard and fresh curry leaf sauce (£3.50) – all the cuteness of baby aubergines cooked to a silky puree with the warmth of mustard and curry leaves.  Okra is a vegetable I am a little wary of, given its tendency to be slimy when cooked, but the stir-fried okra with raw mango (£3.50) was delicious and not a bit slimy. The dhall Panchratan (£3.50), a dhall cooked from a blend of five types of lentils, was tasty although not so different to the dhall you can get in most curry houses.  What did stand out among the sides, though, was the excellent bread – warm fluffy naans (£1.95) as well as a rather fabulous date and ginger naan (£2.20) – the sweetness is fantastic with the spicy curries; and my personal favourite, the addictive, ghee-slicked, flaky Lachcha paratha (£1.95) – apparently a faff to make but a complete buttery joy to eat. 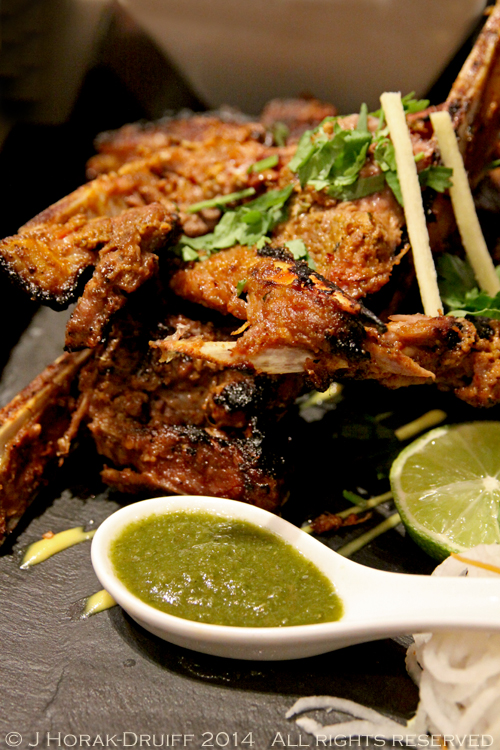 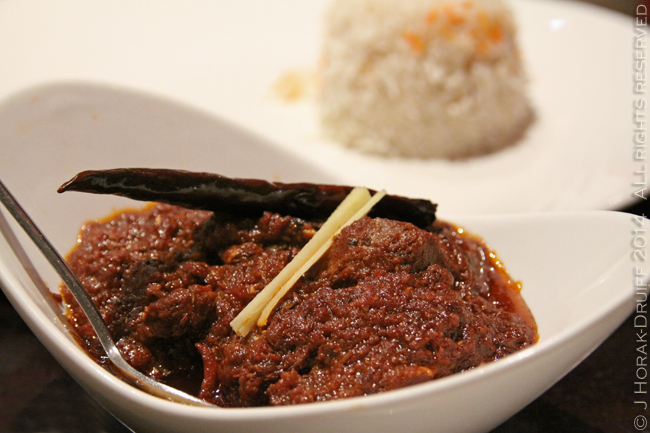 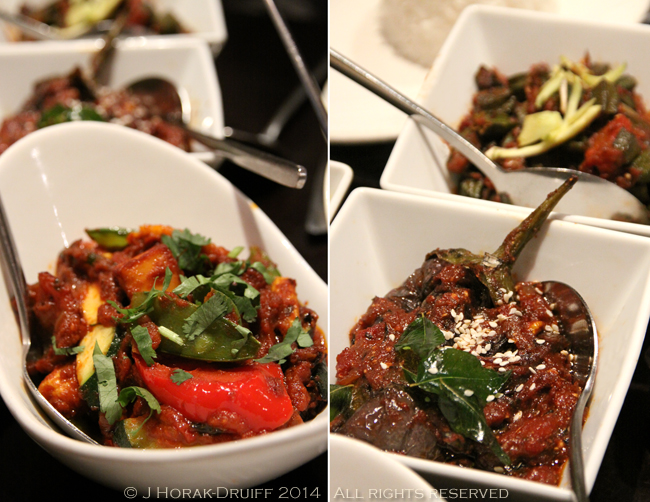 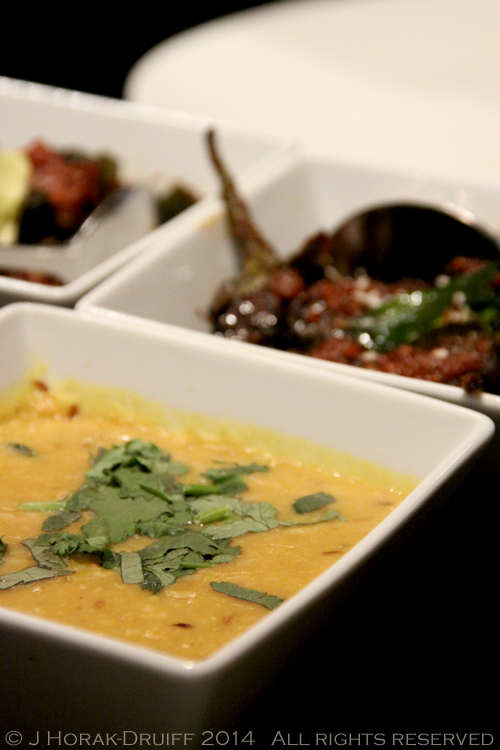 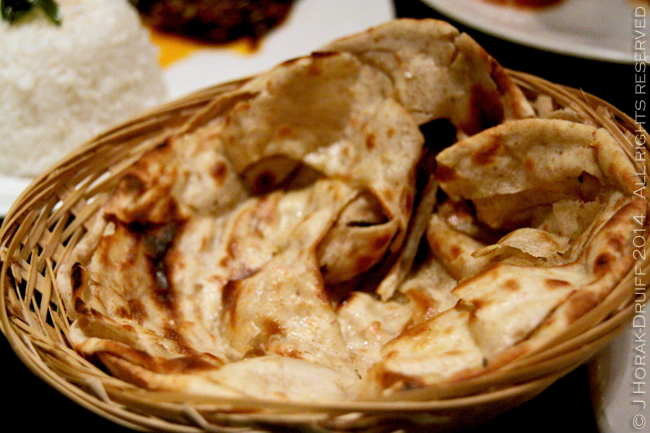 Nobody had a lot of space left for dessert, but in the interests of research (!) we tried two.  The better of the two was the mango sorbet (£3.50) , which had an excellent fruity depth of flavour and gorgeous yellow colour – truly like eating a frozen mango.  The tandoori pineapple with coconut sorbet (£4.50) could have achieved greatness… but didn’t.  The pineapple had the distinctive uniformity, thickness and consistency of a tinned pineapple ring and had been far too lightly charred to add any interesting flavour.  The coconut sorbet was good, but as a whole, the dish did not impress. 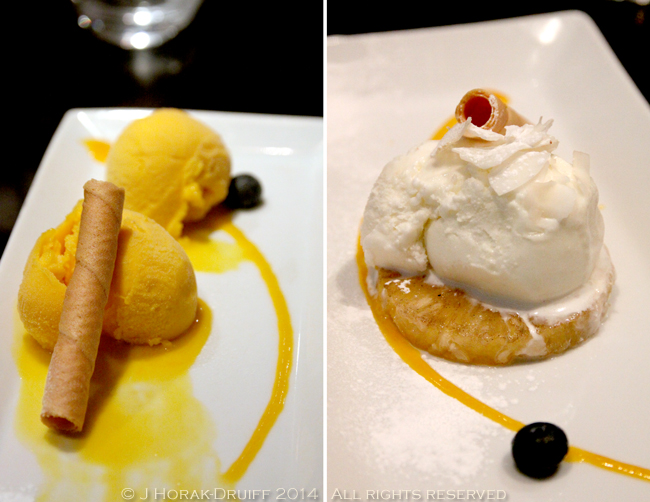 Staff were both charming and happy to answer questions about the menu or ingredients and prices (although somewhat higher than you’d pay in Brick Lane) were generally reasonable (starters around the £5 mark and all mains that we had under £15 each).  I also thought the portions were of a good size.  Some might see the relentless black slates on which much of the food was served and the sauce squiggles on most plates as signs of “trying too hard”.  But it is hard to argue against attempts to show people that there is more to the cooking of the Indian sub-continent than chicken tikka masala.  Food was very good and sometimes downright great (as with the mushrooms and the sea bass) and care was taken with the presentation of every dish.  Camden is perhaps not the part of London you’d normally head for in search of a curry, but if you live in the area or find yourself within a few Tube stops, I would definitely recommend an expedition to Namaaste Kitchen for a curry – with a difference.

For other accounts of our meal, visit Margot’s blog or Michelle’s blog.

DISCLOSURE:  I enjoyed this meal as a guest of Namaaste Kitchen but received no further remuneration to write this post.  All opinions are my own and I retain full editorial control.

« Saturday Snapshots #282
Braised baby turnips and radishes – and a workshop! »