The first time I became aware of the existence of Tyrol as a teenager, I was pretty sure it was somewhere in south-east Asia.  But to be fair, my geographic guesstimate came less from National Geographic than from the lyrics of the (fabulously retro) One Night in Bangkok which makes reference to a Tyrolean spa.  But enough about my misspent youth!  These days, of course, there is Wikipedia to ask so as every schoolboy now knows,  Tyrol is a chunk of Western Austria in the Eastern Alps that borders on Italy, Germany and Switzerland (think Innsbruck and surrounds).  Like Alsace, it is one of those fascinating bits of Europe that can’t totally be claimed by one language group – and in the case of South Tyrol it is a beguiling mix of Germanic efficiency and Italian Brio.  Although I visited Innsbruck many years ago, it seems you need to head further into the mountains to where the culinary action is – specifically to San Cassiano in Badia if you want to experience the cooking of chef Norbert Niederkofler.

Norbert Niederkofler was born in South Tyrol and grew up in small valley in the province of Bolzano, where he learnt his love of home cooking using local quality products from his father. He trained as a chef in Germany before working in Switzerland, the USA and Austria. In 1994 Norbert returned to Italy and joined the Rosa Alpina hotel to revitalise their food and beverage offering.  It was also here in 1996 that he opened his restaurant St. Hubertus which earned its second Michelin star in 2012.  Here, Niederkofler serves up acclaimed dishes inspired by the gastronomical heritage and fresh produce of South Tyrol.  But the mountains are a long way from London to go for dinner and so I was thrilled to be able to attend a recent event in London where chef Niederkofler would be cooking.  The evening was intended to showcase not only South Tyrolean cuisine but also to provide an introduction into the South Tyrol region, which also boasts activities such as hiking and downhill skiing.  Chef Niederkofler briefly explained his culinary philisophy to us before introducing the evening’s theme of ‘Cook the Mountains’ which saw him creating dishes using only seasonal ingredients sourced from the surrounding South Tyrolean region.   All dishes were prepared in a small open kitchen in the venue, with chef Niederkofler and his team explaining each dish andavailable to answer questions at any stage of the preparation. The scene was set for the evening with an amuse bouche plate drawing together a number of flavours that typify South Tyrol:  venison tartare sandwiched between two wafer-thin crackers; a shot of perfectly clear pine resin; and a spoonful of sweet/savoury hazelnut puree topped with a crisp hazelnut sliver (not pictured). 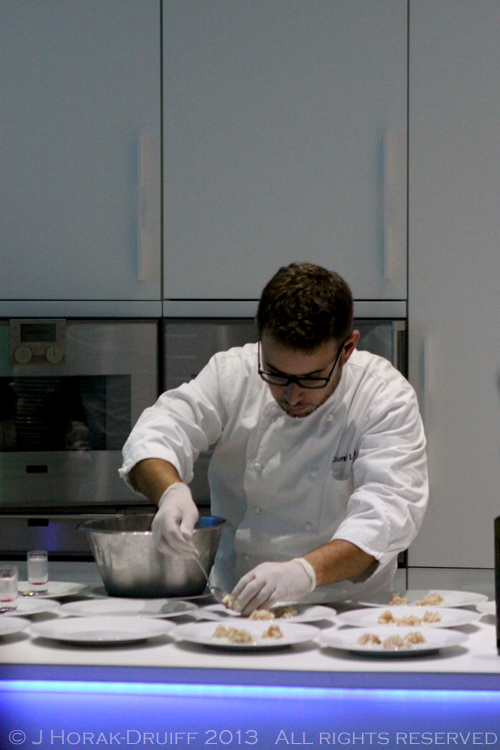 The starter (“River in Wintertime”) was the most intricately plated dish of the evening and, as chef Niederkofler explained, was designed to evoke the beauty of a glacial river and its surrounding riverbanks. Fish tartare from the lakes of South Tyrol was accompanied by wild herbs, jelly and “ice” made from river water from the region, as well as grey edible “rocks” and pristine “snow” made from dehydrated olive oil.  For me, not all of the plate worked in terms of taste – I didn’t like the chalky texture of the “rocks”) but I loved the idea and pretty execution. This, as well as our amuse bouche, was accompanied by 2012 Sylvaner Kuenhof (Alto Adige/Südtirol DOC) by Peter Pilger, a pleasant and fruity wine, rather like a less acidic Riesling.  The fish course was one of my favourites of the evening: South Tyrol char baked at low temperature (as the chef explained, pan-frying is too strident a method for the subtle flavours of the fish) and served on a bed of mushrooms together with a vibrantly green celery sauce, a sliver of crisp bread and a slice of speck. I adored everything about this dish – the bright green evoked pristine mountainsides, and the delicate smoke of the speck seemed to enhance the delicate fish, while the celery kept the flavours fresh. This was also accompanied by my favourite wine of the night, the 2010 Nova Domus (Alto Adige/Südtirol DOC) by Terlano.  This blend of 60% Pinot Bianco, 30% Chardonnay and 10% Sauvignon Blanc, made from hand-selected bunches with partial malolactic fermentation and 12 months in oak barrels was like a mouthful of fruit salad with a good structure and a creamy mouthfeel.  For anbody wondering whether South Tyrol produces wines of quality, this should answer their question decisively. 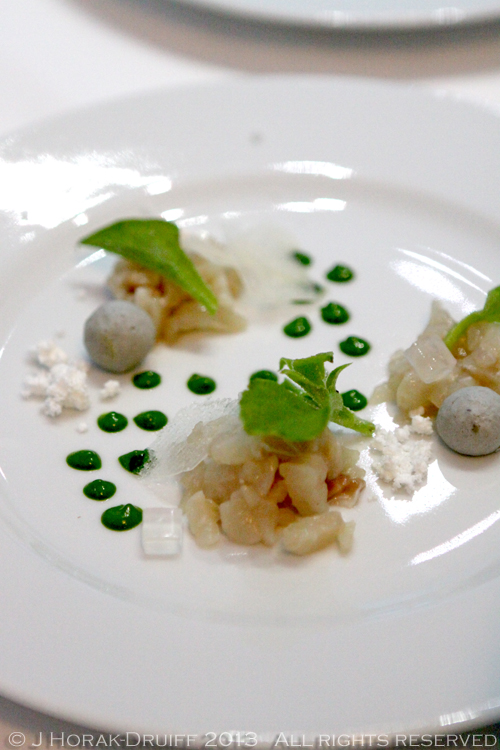 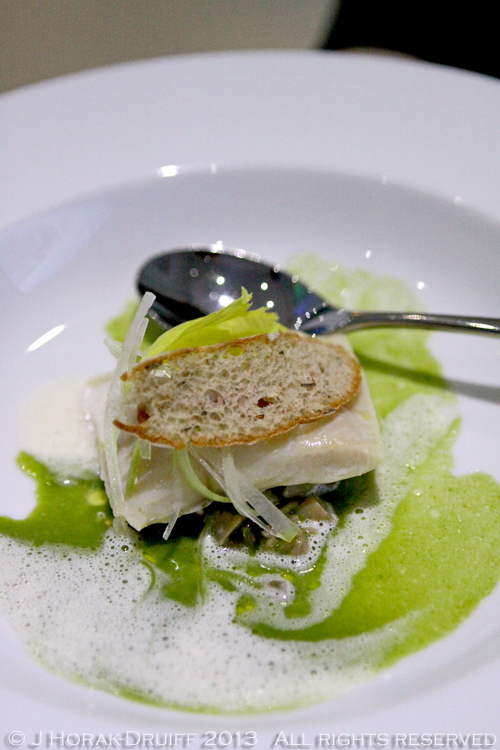 The final savoury course consisted of beetroot gnocchi filled with radish and horseradish cream, sautéed in butter and beetroot juice and garnished with young beetroot greens and beer “soil”.  This was comfort food, South Tyrol style – the gnocchi had a perfectly al dente consistency but one bite revealed the creamy centre with the bite of horseradish.  Chef Niederkofler also came round with the massive copper pan in which the gnocchi had been sautéed,  offering up seconds and drizzling more of the jewel-coloured sauce on our plates. This was accompanied by a 2010 Pinot Nero Riserva Trattman (Alto Adige/Südtirol DOC) by Girlan, a soft yet rich example of Pinot with good colour and succulent fruit.  Dessert was once again accompanied by a bit of theatre:  green apple sorbet with pine needle marshmallow (made with apples and pine needles from South Tyrol).  Once the dish was plated, we watched as the chefs took glowing coals from a waiting grill and pressed them gently on the marshmallow for just long enough to caramelise the exterior so that it resembled a campfire roasted marshmallow of my youth and infused the dessert with a gentle smokiness. Inspired!  This was accompanied by a glass of 2011 Kerner Praepositus Passito (Alto Adige/Südtirol DOC) by Abbazzia di Novacella, a dessert wine made from grapes left to dry out to a raisin-lime consistency to concentrate the flavours. 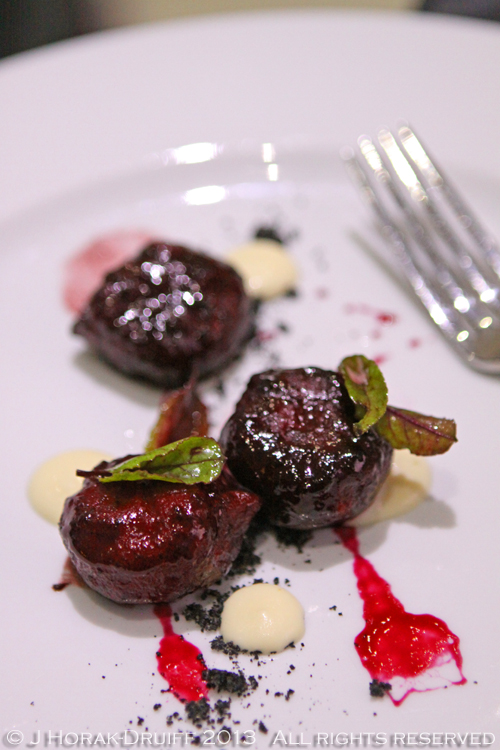 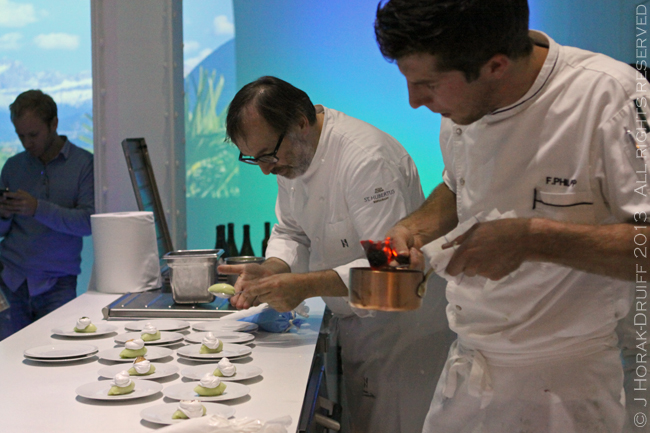 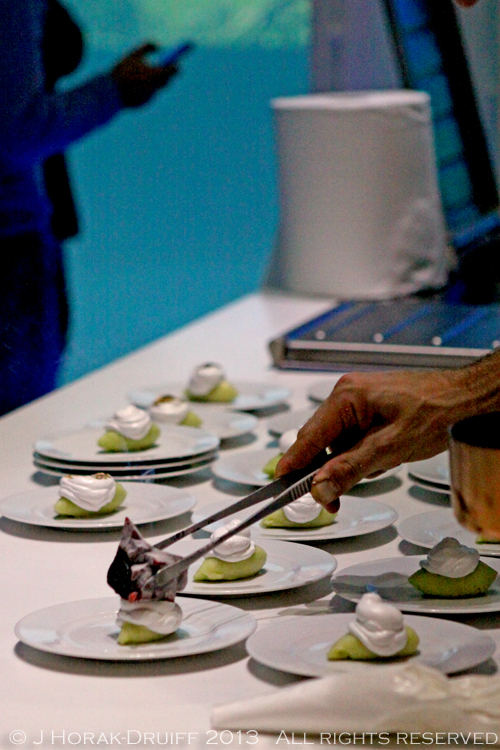 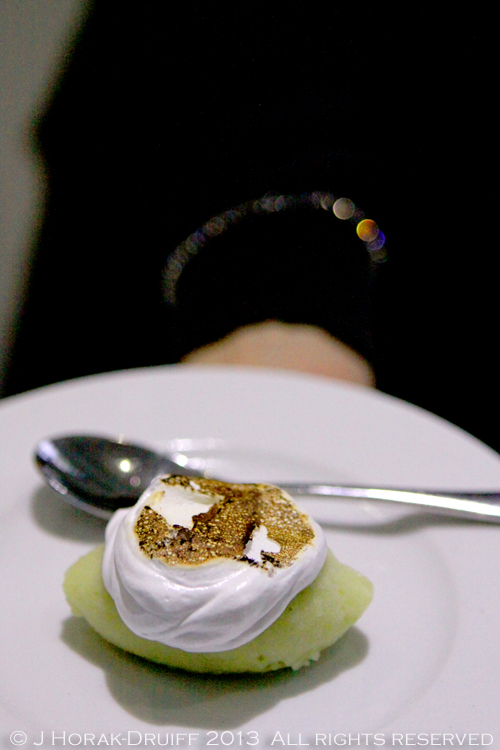 The wines were a revelation to me, and the whole evening was a fascinating insight into the philosophy and flavours of the cooking of a world-renowned chef, and his passion for both the ingredients and the South Tyrol region was infectious and made me keen to find out more about visiting the area.  The region is an all-year destination with 300 sunny days a year – warm summers and spectacular snowy winters – and year-round gastronomic delights.  For wine lovers, there is a wine safari on offer; and when the snow begins to fall, it’s time for the “Slope Food” gourmet ski safari, a ski-in, ski-out movable feast which allows you to ski from mountain hut to mountain hut sampling fourteen different small plates created by Michelin-starred chefs.  As a ski bunny and a food fan, this sounds like my idea of heaven!  The Rosa Alpina and St Hubertus restaurant are located two-and-a-half hours north of Venice and two hours south of Innsbruck.

For more information on the gourmet and wine events this winter in Aldo Adige/South Tyrol region visit http://www.altabadia.org and http://www.suedtirol.info/en/.

DISCLOSURE:  I attended this event of the South Tyrol tourist board but received no other remuneration for writing this post and all opinions are my own.