How many of us have not at some point expressed a desire to make a real difference in the lives of those less fortunate than ourselves?  But more often than not, when conversation turns to what form this making of a difference might take, the plans and schemes always involve travel to exotic climes, rescuing endangered species, building schools in jungles or teaching in remote mountain villages. It requires a valid passport, quitting of the day job, renting out of the flat, and complex travel arrangements for at least a year – which is exactly why the schemes never come to fruition.  When somebody tentatively suggests that there are thousands of people on this very island whose lives could benefit significantly from some assistance, their suggestions are batted away as silly because “the people with real problems” obviously live in sunnier climes. The idea that charity begins at home with small and unglamorous tasks like volunteering to clean cages at a local animal shelter, or reading to schoolchildren in underprivileged boroughs, or doing the shopping for vulnerable elderly people seems lost on most people.  But Simon Boyle is not one of those people.

Turn right on Tooley Street out of London Bridge station and right by More London and Hays Galleria you will come across Brigade Bar and Bistro.  Simon’s brainchild occupies the site of an old fire station built in 1879 to save lives and protect property after the devastating fire at Cottons Wharf on Tooley Street on 22 June 1861.  Just 30 minutes passed from the discovery of smoke at a warehouse to the fire burning out of control and the flames soon stretched from London Bridge to Customs House. Engines arrived from all over the country to help the the local fire engines, but it still took two weeks to put the fire out and it was  regarded as the worst since The Great Fire of London. The fire led to the creation of the Metropolitan Fire Brigade in 1865, of which The Fire Station in Tooley Street would be a part.

Since March 2012, Simon Boyle has used the same values of business sense and social responsibility to run Brigade as a social enterprise,  offering people who have experienced or been at risk of homelessness the opportunity to take up six-month apprenticeships in the restaurant.  This life changing opportunity provides both the qualifications and personal mentoring necessary to ensure apprentices are able to find sustainable employment in the future. I rather like the symmetry that the restaurant means a fresh start for this historic building as well as a new future for a number of vulnerable people who are training there. Brigade supports the Beyond Food Foundation which helps apprentices into careers in catering and hospitality – rather like Jamie Oliver’s Fifteen but more low-key without the celebrity figurehead, publicity and hype. 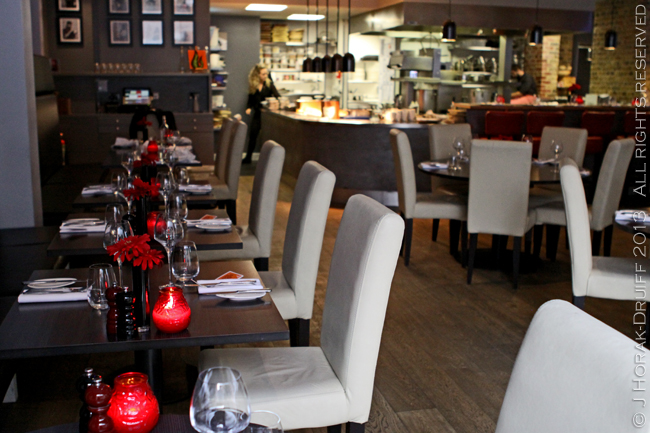 The room is bright and airy, decorated in no nonsense Pizza Express-esque style, with a large open kitchen with counter seating at one end of the room and a bar area along one wall. A private dining room is available in a far prettier alcove off the main dining room.  On the afternoon that we visited, the restaurant was not open to the public, but I imagine that things get a little noisy when it is busy, between the uncarpeted floor and open kitchen.  The bistro menu (there is a different one for the bar) is divided into starters, mains, simple classics, classics and desserts, plus a specials board that changes regularly.  We started with a selection of three outstanding handmade breads with individually-wrapped pats of Netherend Farm butter (£ 3.75), moreish hot and salted almonds £ 2.95, and fat, juicy olives with chilli and lemon £ 2.95.  The breads were a sage and onion; fennel and honey; and the dark rolls in front made with treacle. I would have spent the rest of the afternoon eating only the breads, left to my own devices – that’s how good they were. I also loved the Bisol Jeio rosé prosecco available by the glass (£6.00) and was thrilled to spot two wines from one of my favourite South African wineries: Kleine Rust Fair Trade Chenin Sauvignon (£5.50 per glass) and Kleine Rust Simplicity Merlot Cabernet Shiraz (£6.75) – both by Stellenrust.  The vast majority of the wines are democratically priced at under £40 for a bottle 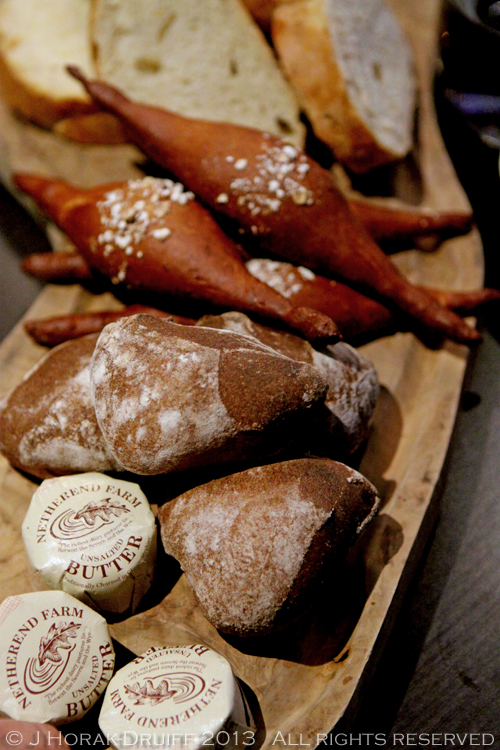 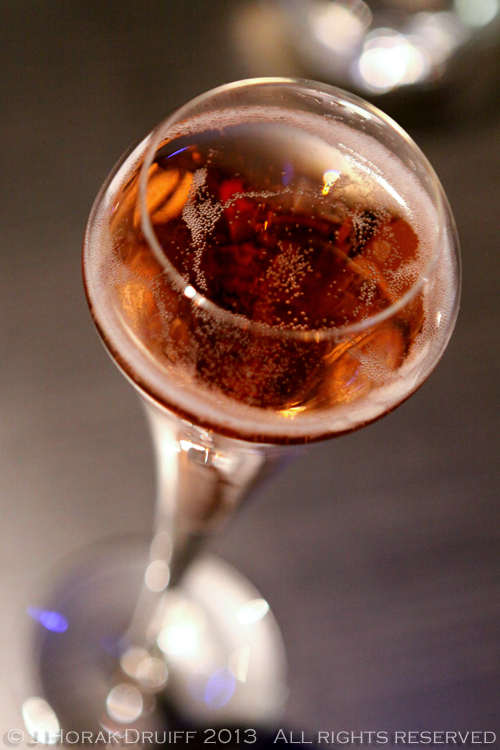 As our group was quite large, we managed to order one of each of most of the starters, I think.  My choice was the  New Forest wild mushrooms on sourdough toast with a fried duck egg (£8.95). Although not a huge portion, this was delicious – crunchy sourdough topped with earthy, creamy mushrooms and a perfectly runny-yolked egg.  There were also no complaints when one f our party asked to have hers served without the egg. Next to me, Solange’s Scotch eggs with beetroot piccalilli, fennel, and green apple Slaw (£8.95) looked delicious, particularly the unusually vividly coloured beetroot piccalilli.  Elsewhere at the table there was Colston Basset Eccles cakes with cranberry and rosehip ketchup (£6.95) (not pictured) and Cornish crackling mackerel salad with pomegranate and manuka honey dressing (£8.95), a beautiful plate of food and a clever pairing of sweet accompaniments with the oily mackerel.  Opposite me, Michelle had the baked British seafood (£11.95).  I loved the presentation in a scallop shell where the two halves had been sealed together with puff pastry and served on buttered samphire.  But once the shell was broken open it contained only one scallop, three very small mussels, two cockles and a bit of leek.  Michelle pronounced it delicious, but the portion was so tiny I felt too guilty to take her up on her offer of a taste.  For nearly £12, this was a seriously meagre portion, however pretty the plating was.

The rest of the building, which houses private dining and meeting rooms, a cookery school and offices 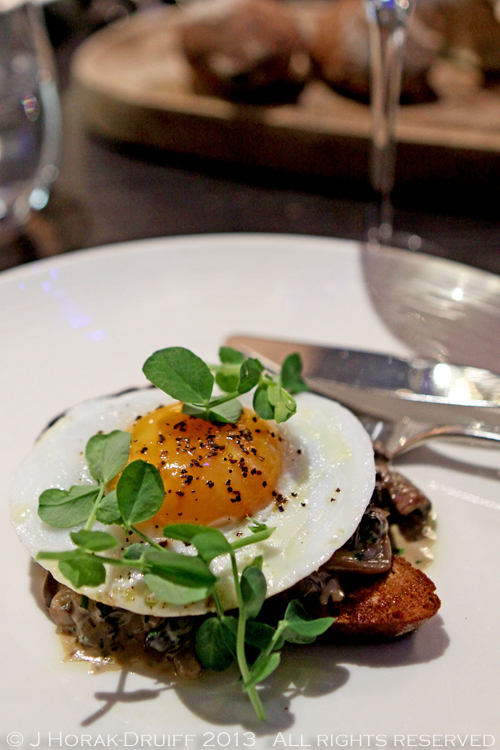 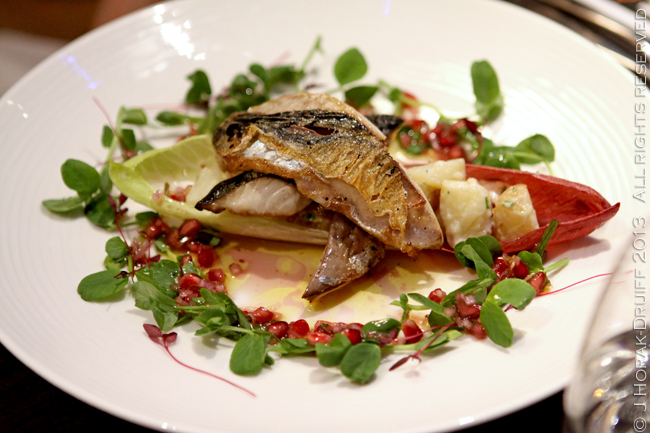 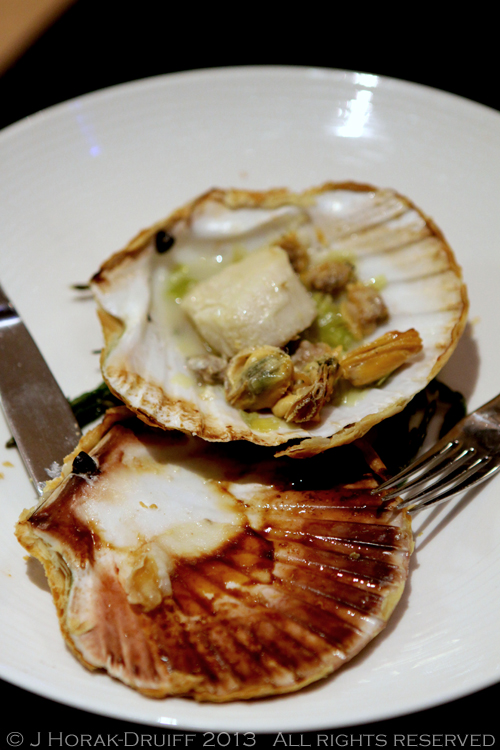 For my main course I chose the ravioli of lobster and salmon with lemon and sage dressing (£19.95).  “Ravioli” was a bit of a misnomer as the dish consisted of a single raviolo, about the size of the base of a wine glass, filled with seafood and resting on top of a bed of sautéed baby pak choi.  The raviolo was generously filled with seafood and the dressing was well-flavoured (although some found it too salty), but in general I found the dish to be a little dry and once again an extremely meagre portion for a main course of almost £20.  Michelle fared better with her choice of poached fillet of beef with figs, wild mushrooms and radish (£29.95) which was a fabulous and unusual combination.  The super tender steak was served on a bed of mushrooms and radishes, topped with a roasted fig and toasted hazelnuts – definitely something to try at home!  Elsewhere at the table, Sarah feasted on pork belly toad-in-the-hole with buttered cabbage and pear cider onion gravy (£16.95) – such a clever idea: a square of pork belly surrounded by the usual puffy, golden toad-in-the-hole pastry. 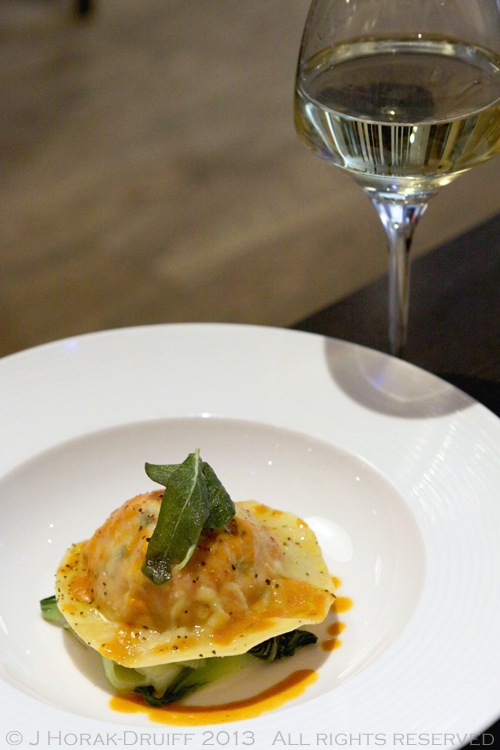 Now in many restaurants, you will find that the side dishes are a hasty afterthought, barely considered and carelessly executed – but not so at Brigade.  Here, the side dishes often stole the show. We had a good selection including sautéed chard with hazelnut butter (£3.25) (al dente chard with chunky bits of hazelnut on top);  tossed Autumn salad with chive and mustard dressing (£3.25) (a surprisingly taste selection of root vegetable sand greens with a fab dressing); roasted butternut squash with aubergine and chilli oil (£2.95) (wholesome, warming and delicious); the utterly revelatory deep-fried broccoli with rustic tomato and white bean stew (£2.95) (Broccoli!  batter-coated and deep-fried! Who knew! A huge portion and a total bargain at under £3); and the simplest and tastiest of all, roasted beetroot with cumin seeds and honey (£2.95) (seriously the best thing a beetroot can become.  Why doesn’t everybody lace their beetroot with cumin?). 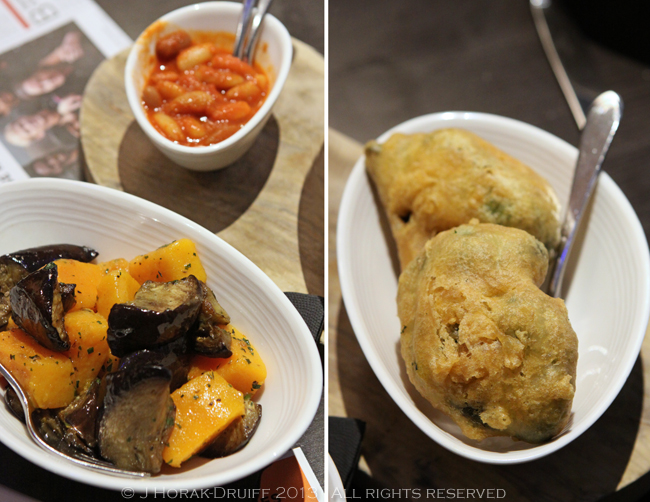 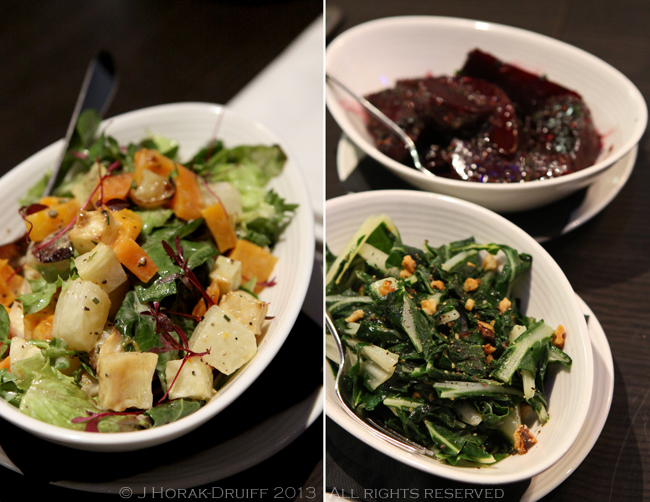 For dessert, some of us chose the Bakewell tart (£6.95) – small and perfectly formed with crumbly pastry, good frangipane and a pretty shard of crunchy almond brittle: the antithesis to Mr Kipling’s sugary travesties.  I selected the chocolate and rose parfait (£6.95) from the specials board which consisted of a slab of rich semi-frozen chocolate mousse laced with the Turkish delight flavour of rosepetals.  I loved the combination, especially together with the slightly tart rips red berries that accompanied it. I also had a little pick at Michelle’s cheeseboard (£10.95) which included goat’s cheese, Brie, Stinking Bishop, Colston  Bassett blue and my favourite Montgomery Cheddar 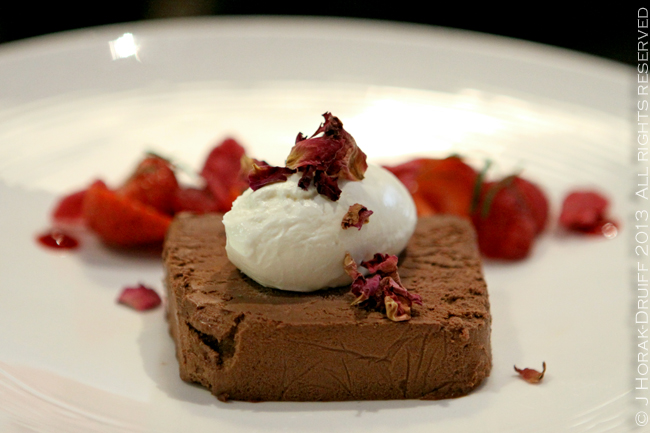 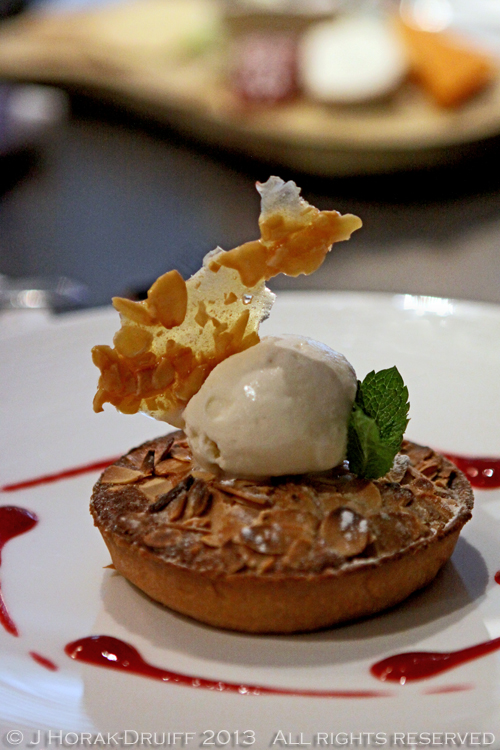 On balance, the meal was very good, especially considering that most of the people preparing it were inexperienced chefs still learning their trade. There was some great plating and as I said, the side dishes were endlessly impressive.  But on the downside, some of the pricing seemed a little steep to me, particularly given the portion sizes – the single raviolo at nearly £20 and the teensy seafood bake spring to mind.  One can argue that all the money goes to a good cause and that I should not begrudge the prices, but even a very laudable social enterprise still needs to be competitive in the real world.  That said, I would go back as I really admire the values behind the enterprise, and I think that Simon is doing a very good thing – but next time I will order the broccoli as a starter and avoid the raviolo!

For other perspectives on our lunch, see

DISCLOSURE:  I enjoyed this lunch as a guest of Brigade Bar & Bistro but received no other remuneration to write this post and all views are my own