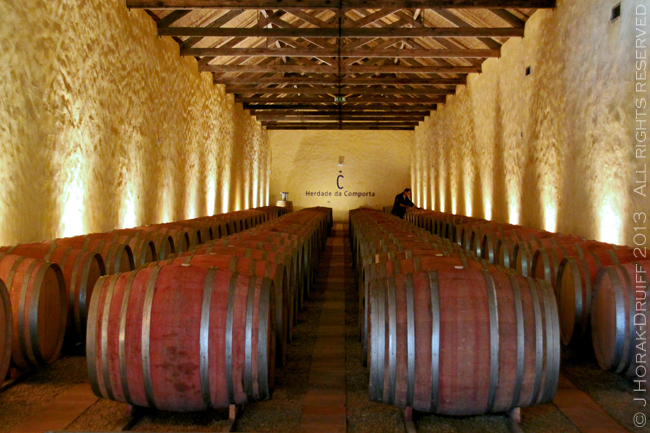 I had expected to encounter piri-piri prawns and chicken in Portugal.  I was prepared for some bacalhau; for donkeys on the beach; for intricately patterned ceramic tiles; for full-bodied, hot-climate red wines; for wild lavender and olive trees.  But none of these were in evidence as I gazed out over a flat landscape divided neatly into rows by the convergent lines of silvery rills of water standing between raised beds of faintly familiar grasses:  the rice paddies of the Costa Alentejana. And this was while my head was still reeling from being told that the river behind us is home to a pod of dolphins.  Perhaps that last post-prandial digestif of medronho last night had not been such a good idea.

We were being shown around the very massive Comporta estate,  the largest privately owned property in Portugal, belonging to the family-owned Espírito Santo Group. The Comporta estate is linked to a foundation which, amongst other goals, aims to develop the area asa  high-quality tourist destination and to become a model for sustainable development in Europe, while still operating as an agricultural estate and preserving its environmental and cultural heritage. They ai to achieve this by promoting and preserving traditional agricultural activities and respecting the land, while creating jobs and making traditional activities commercially viable for the local inhabitants.  It’s a massive project – and a massive area.  The estate comprises 12,000 hectares in total, including 8,000 hectares of pine, juniper & oak forest, 60km of coastline and 12km of golden beaches.  It also encompasses part of the Rio Sado natural reserve, a conservation area centred on the estuary of the Sado River which is home to over 300 species of birds and animals – including (to our astonishment) a pod of about 20 wild bottlenose dolphins.  The dolphins are usually found closer to the estuary mouth at Setubal, but here at the south-western corner where we were, the estuary has a different charm altogether – quiet backwaters where silvery water and pale blue sky melt together at the horizon; of water lapping gently at fishing boats marooned by the tide while taciturn fishermen with weatherbeaten faces wait for the tide to turn. 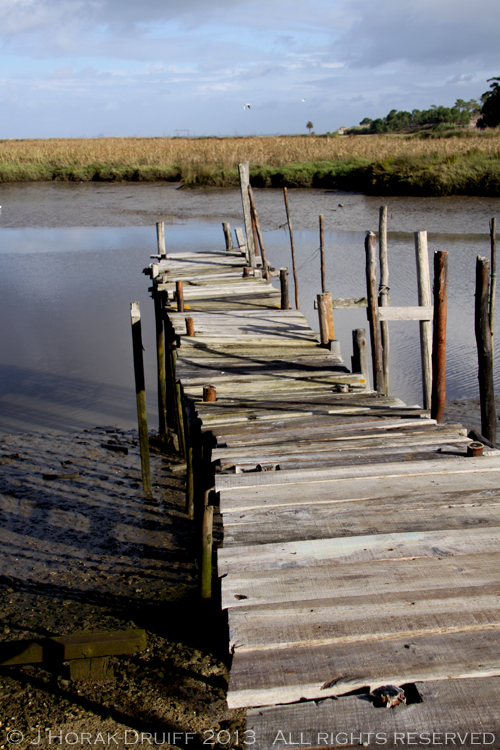 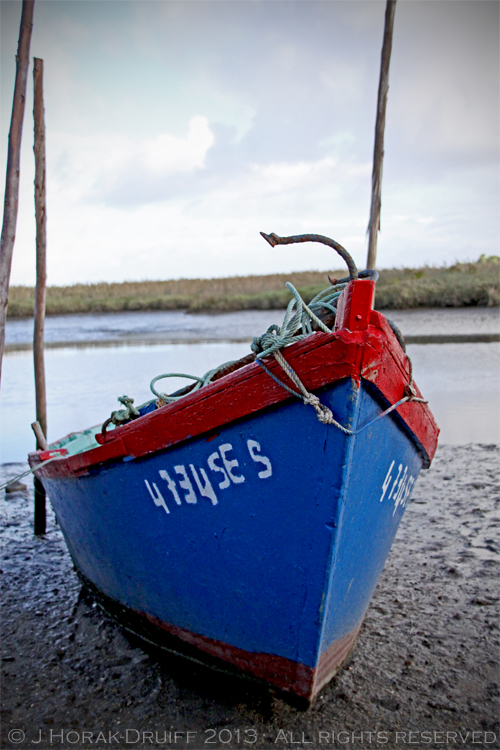 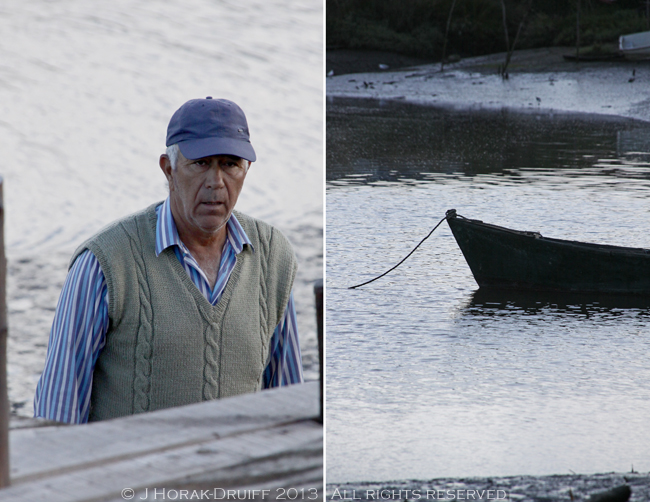 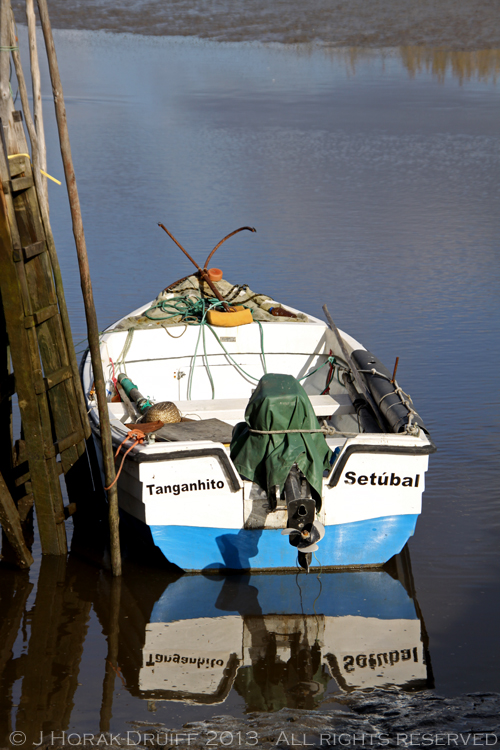 Turn away from the estuary and cross the road, and you will see another surprising sight:  rice paddies.  Herdade de Comporta includes 1,070 hectares  of rice paddies which annually produce around 6,500,00 kg of the grain.  Surprisingly, Portugal has one of the highest per-capita rice consumptions in Europe and rice has been successfully grown here since the early 18th century.  The flat, well-irrigated landscape provided by estuaries such as the Rio Sado create the perfect environment for growing rice and here at Herdade de Comporta there is even a small museum dedicated to rice production.  The museum is housed in an old rice mill, dating back to 1952, which is when Herdade da Comporta first began to process rice. Displays not only explain the importance of this cereal for Herdade de Comporta, but a walk through the old mill also provides a glimpse into the husking, processing and bagging process in the middle of the 20th century. 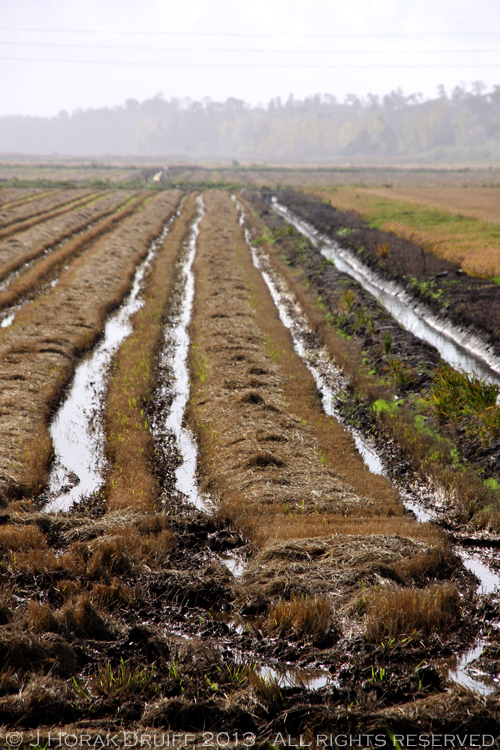 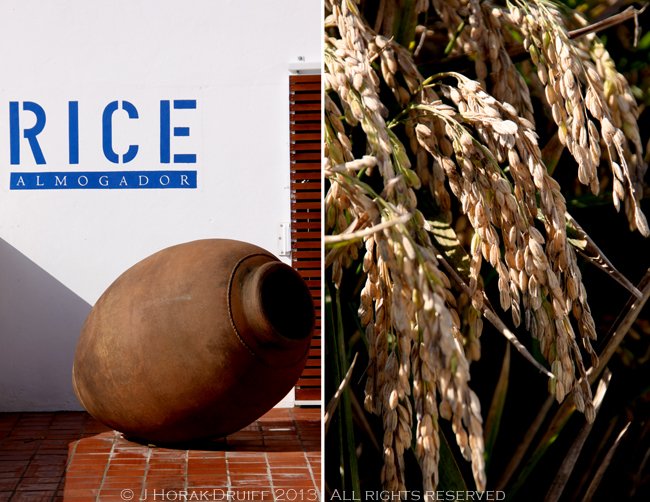 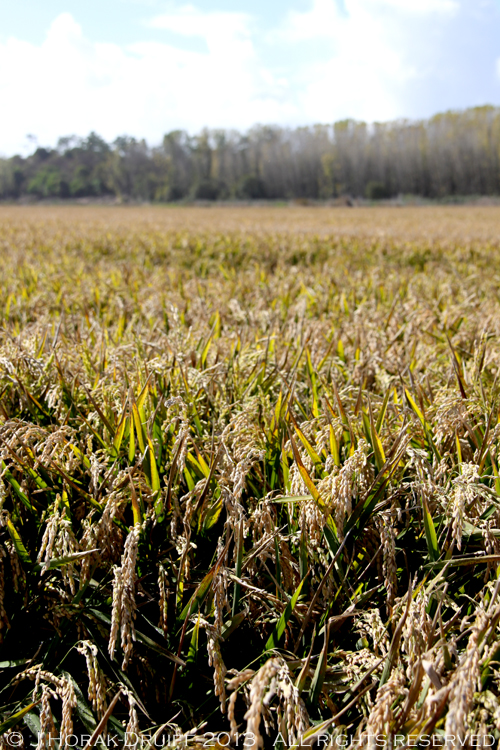 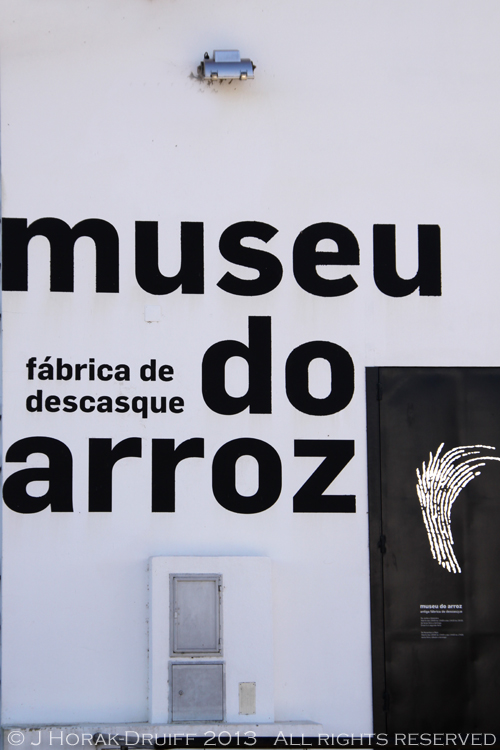 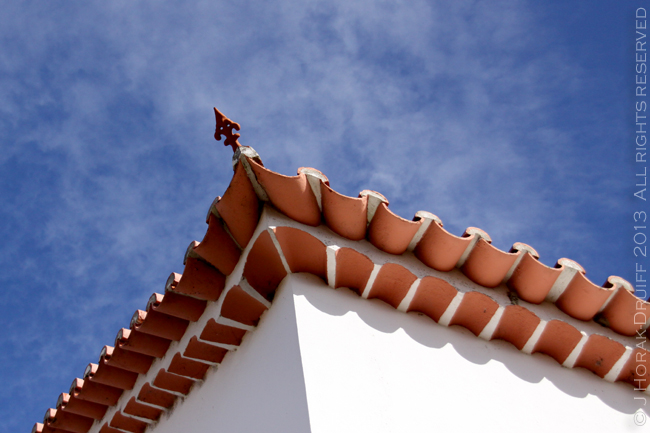 From rice, we turned our attention to wine as our host Bruno took us to see the Herdade de Comporta vineyards.  Only 35 hectares of the estate is dedicated to vineyards where the vines grow in the same strikingly sand soil as the rice, and (we are told) benefit from a saline marine influence courtesy of the nearby ocean.  The proximity of the ocean also has a moderating influence on temperatures and there is not a huge fluctuation between daytime and night time temperatures. The estate’s first year of production was 2003 and 80% of their grapes are red varietals:  Aragonez, Trincadeira, Alicante Bouschet, Periquita and Touriga Franca (the white varieties Arinto and Antão Vaz are also grown).  From the vineyards, we were taken to the impressive modern winery with its attractive barrel maturation cellar.  Only French oak is used and after 4-5 years the barrels are sold on to Madeira manufacturers.  Of their wines, only two of the reds (Herdade de Comporta and Parus) are oak matured so the cellar holds only 500 barrels kept at a constant, cool 22C all summer long by cold water pipes running through the walls and floor of the barrel cellar. Music is also played into the barrel cellar 24 hours per day “to calm the wines” (!). 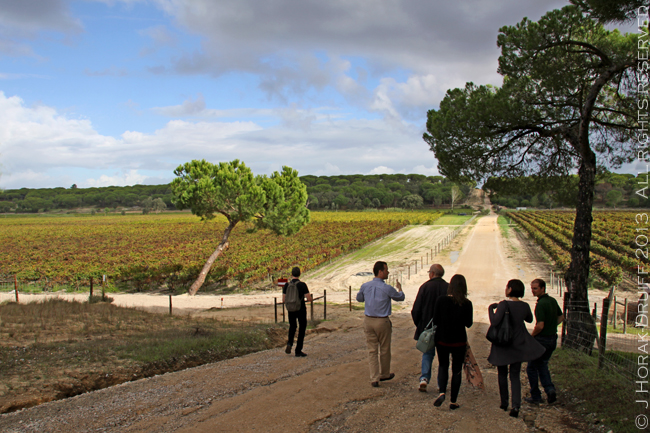 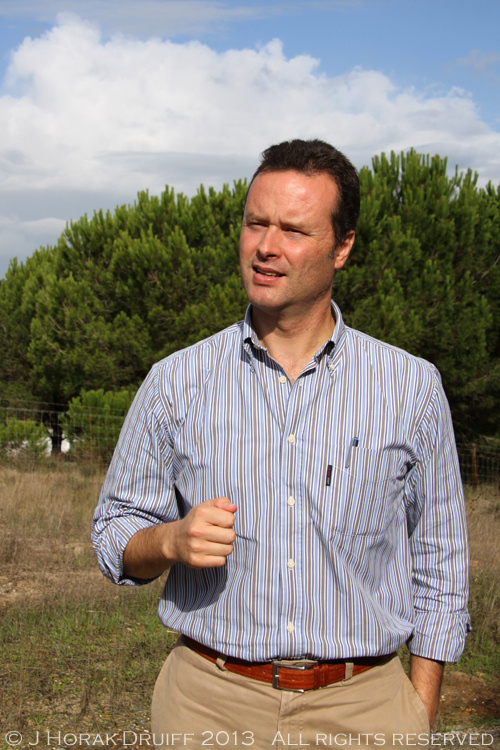 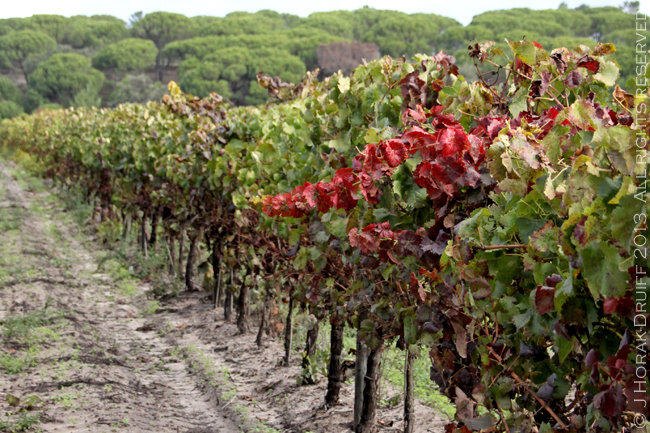 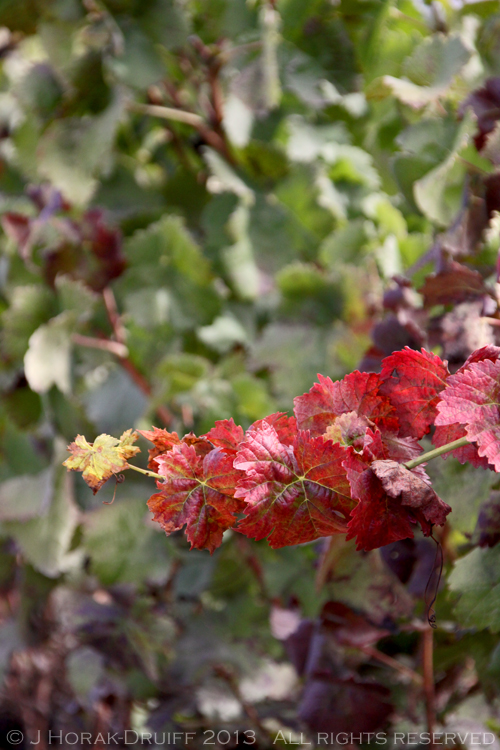 But the proof of the pudding, as they say, is in the eating (or in this case, the drinking) so we soon made our way upstairs to the tasting venue to sample a couple of their wines.

The unoaked 2011 Parus White (100% Antão Vaz) had an enticingly spicy nose with hints of orange peel and pineapple.  On the palate the citrussy notes did come through, but it seemed a little flabby to me, as if there was not enough acid to balance out the fruit.  A medium-bodied wine with a fairly short finish. The 2008 Herdade de Comporta Red (a blend of Aragonez, Trincadeira, Alicante Bouschet and Touriga Franca) was an appealing clear garnet colour and had a nose filled with the promise of ripe fruit, but I could not detect much fruit on the palate.  What I could detect were burnt caramel flavours and fairly big tannins, with a medium finish.  Although, that said, I think that this wine would have benefited from being tasted with food because the bottle we’d had with dinner the previous night was a far more appealing prospect, full of raisinny flavours and approachable tannins.   The 2010 Parus Red (a blend of 80% Alicante Bouschet, 10% Aragonez  and 10% Touriga Nacional)  held a vanilla-scented promise of plentiful ripe blackberries on the nose, but still seemed quite closed on the palate with the tannins muting the ripe berry flavours.  It did show promise though – I’d love to meet this wine again in 5 years time. 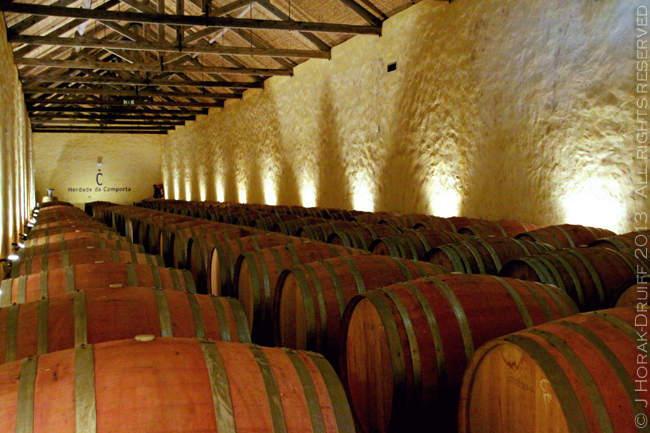 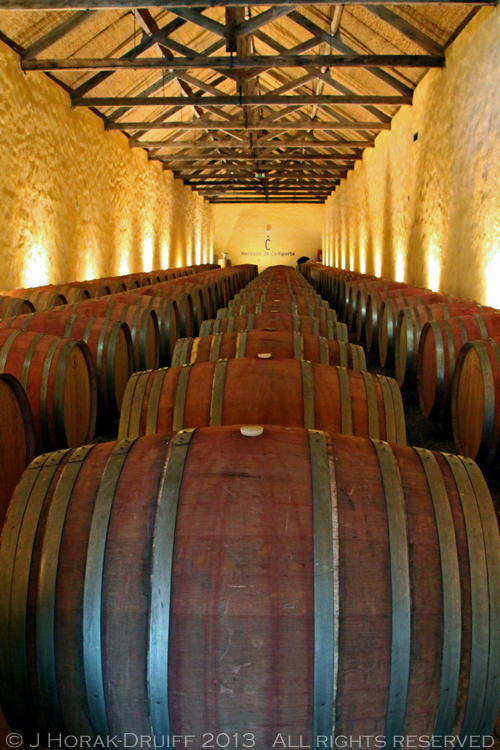 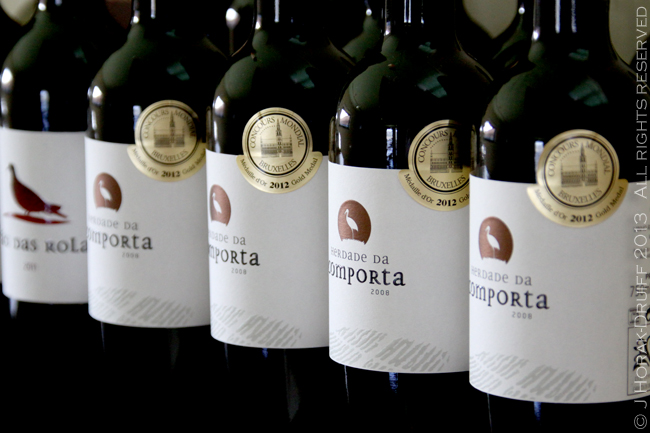 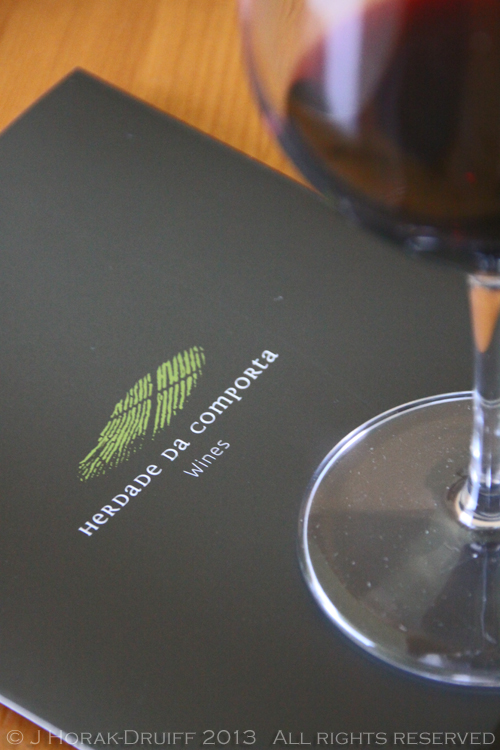 It had been a fascinating morning of sweeping away Portuguese stereotypes, and one hopes that the estate succeeds in its lofty goals of upholding local culture and agriculture and making it a viable economic activity.  If you have more time to linger than we did, there are also a number of restaurants within the Herdade de Comporta estate, including one at the rice museum and a number of spectacularly situated beach restaurants.

Stay tuned for our spectacular seafood lunch at O Dinis on Carvalhal Beach!

Other posts in my Alentejo series include:

GETTING THERE & GETTING AROUND We flew on TAP Portugal which operate a number of direct flights per week from London Heathrow airport to Lisbon, with fares starting at about £125 for a return flight. EasyJet also operates regular flights from Gatwick and Luton.  The Alentejo is easily accessible by train from Lisbon (there is a station in Grândola and trains to and from Lisbon seem to run about hourly), but it makes things easier to have a car while you are there. The other option is to be driven around by a tour guide – we were lucky enough to be ferried around for the entire weekend by the endlessly cheerful and knowledgeable Jorge Pereira from Passeios & Companhia whom I cannot recommend highly enough.

DISCLOSURE:  This was a press trip organised and paid for by Costa Alentejana Regional Tourism Organisation.  Other than the trip itself, I received no payment to write this post and all opinions are my own.